The Premier League season is only four games old but Chelsea fans are already split on a number of topics.

Who should be Frank Lampard's centre back pairing? Should captain César Azpilicueta be dropped? And have too many youngsters been fast-tracked into the side?

However, perhaps the most pressing issue is the lack of flair in wide areas. After the inevitable took place and Chelsea lost possibly the most talented player to wear the shirt, Eden Hazard, there has been a clear dearth of creativity and individual brilliance.

As the only new face through the door this summer due to the Blues' registration ban, many fans hoped American youngster Christian Pulisic would partially fill the void left by the Belgian maestro.

There was some skepticism, however. Some felt Pulisic's signing was nothing more than a marketing ploy to grow the club's profile in the U.S. Whatever the 20-year-old did on the pitch would be a bonus.

Four games into the Premier League campaign and the American is yet to register a goal or assist. He did, though, impress in the UEFA Super Cup defeat to Liverpool and one Hazard-esque run enabled Pulisic to tee up Olivier Giroud for the opening goal of that game.

But how does Pulisic really compare to his Belgian predecessor? While at Stamford Bridge, Hazard built his reputation on his dribbling ability and in his final season he attempted 6.31 dribbles per 90.

Pulisic is not far off that – he has attempted 5.85 dribbles per 90 since his arrival from Dortmund – but the difference in quality is evident when looking at how many of these attempted dribbles are successful. 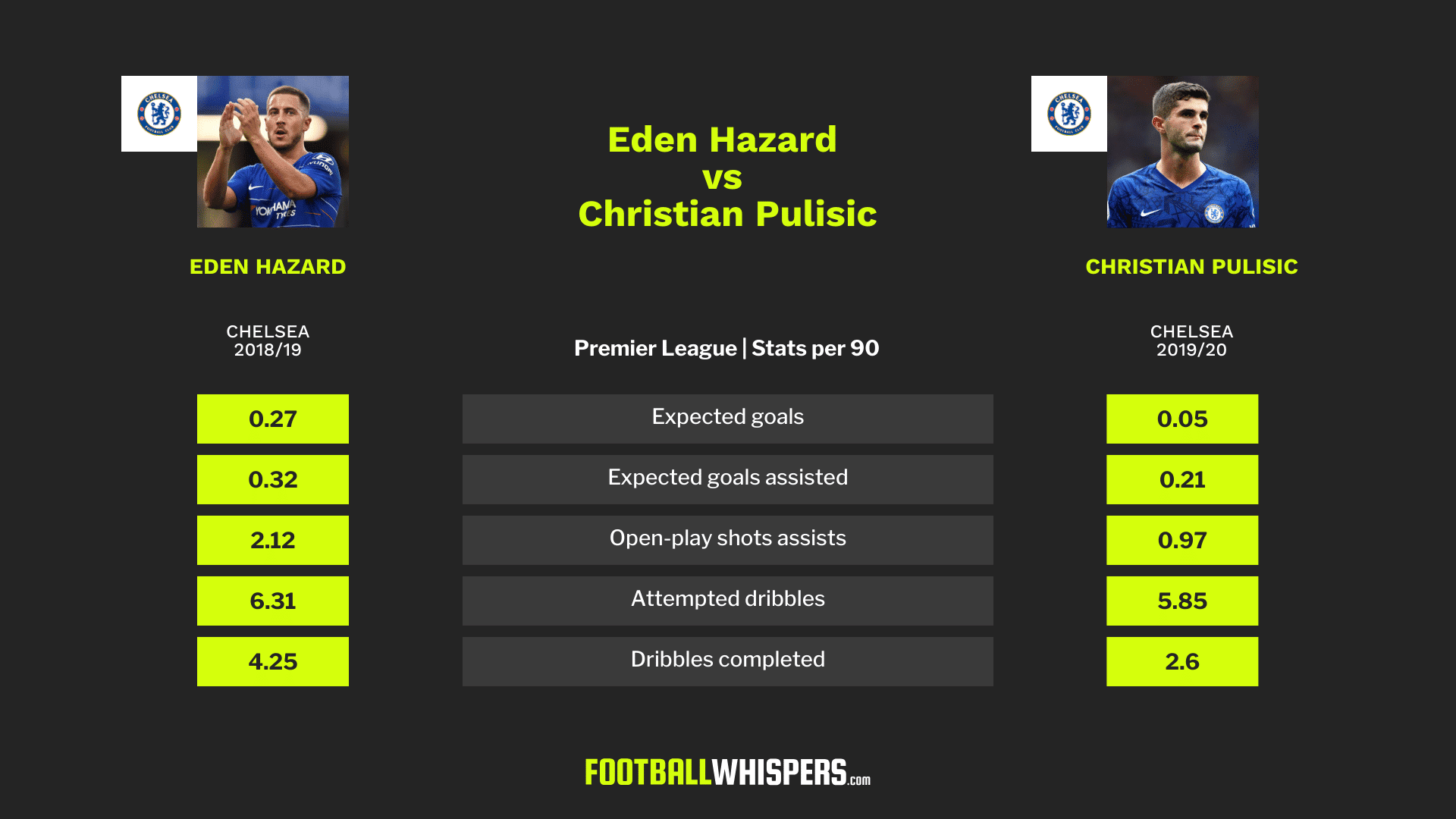 The American is unable to keep hold of the ball as effectively as Hazard, nor is he able to fashion as many goalscoring opportunities – he significantly trails the former Chelsea No.10 in shot assists per 90, as highlighted in the graphic above.

This struggle may be due to the physical nature of English football. Defenders, unlike in many other European leagues, are given greater licence to impose themselves on opponents and can push tricky wingers off the ball without fear of punishment.

What also shouldn't be overlooked is that Pulisic is just 20 years old. And at only 5ft 7ins, he will need time to adjust to the more physical aspects of the English game.

That isn't a luxury every player to have made the jump from Bundesliga to Premier League have enjoyed. Henrikh Mkhitaryan, for example, struggled to imprint his style at Manchester United and then Arsenal despite having starred for Arsenal.

Conversely, Son Heung-min arrived at Tottenham Hotspur from Bayer Leverkusen in 2015 and was given a season to adjust. The South Korea international is now regarded as one of the Premier League's finest attackers. 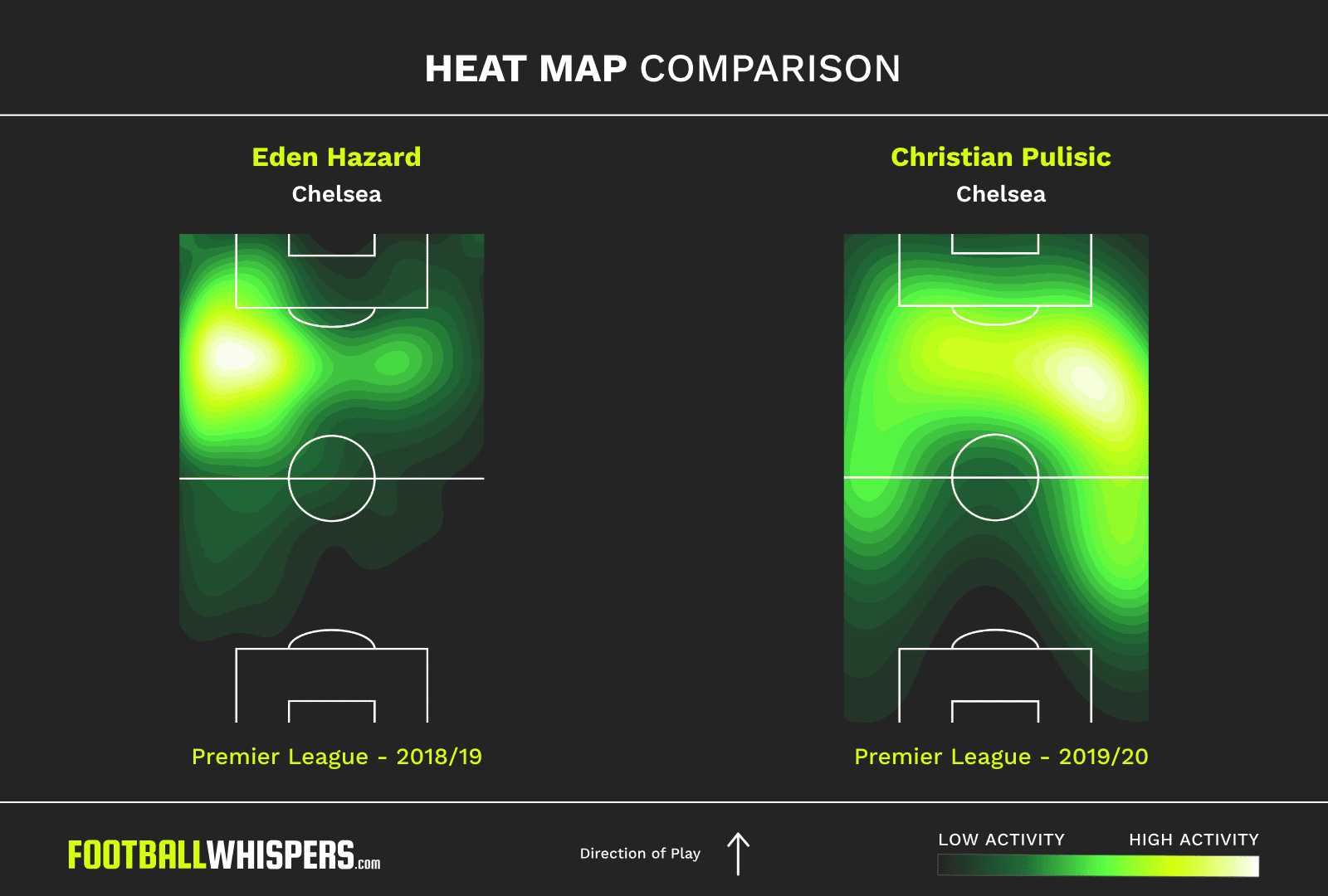 As shown in the heat map above, Pulisic has been moved around under Lampard to accommodate other players. He has started games on both flanks and while that versatility is valuable it can also have a negative effect on a player.

Azpilicueta, for example, has been deployed at right-back, left-back, centre-back and now once again at right-back in his Chelsea career. It has impacted his positioning in certain areas of the pitch, which has already cost Lampard's side this season.

Willian has also suffered due to his versatility. The Brazilian arrived after Hazard had made the left-wing spot his own and so was pushed out to the other side of the pitch. It is perhaps why he has never scored the goals or registered the assists a player of his quality should be.

Pulisic, in contrast to Willian, prefers to play on the right flank. But in order to get the best out of USMNT star, his position must remain consistent.

A key moment in Pulisic’s development at Chelsea may be the return of Callum Hudson-Odoi from injury. The Blues academy graduate enjoys playing on the left as it enables him to cut inside and unleash shots off his stronger right foot.

If Hudson-Odoi locks down the left flank it will ensure Pulisic can excel in one position, something Willian, Pedro and even forgotten man Oscar struggled to do. It would also be the first time in over a decade that Chelsea have a pair of wingers both playing on their favoured flanks, an extremely exciting prospect.

Pulisic may have been signed by Chelsea to reap the rewards of a gap in the American soccer market but if he's given time to develop and adapt his game, he'll prove himself far more than a commercial tool.