There is still plenty for Chelsea to play for this season. The Blues remain in the hunt for a place in the Premier League top four and have a Europa League semi-final against Eintracht Frankfurt next month.

Yet it's difficult for those with an affiliation to the club not to skip ahead to the summer, which could prove a defining period in Chelsea's future. Maurizio Sarri may be sacked. Eden Hazard is likely to be sold. And, most importantly of all, the Blues, as things stand, will not be able to sign players.

That – and Hazard's expected departure – will place a heavy burden on the current squad. It can be eased somewhat by promoting from within, to trust the likes of Reece James, Mason Mount, and Tammy Abraham, a trio who have all impressed out on loan this season.

Further responsibility will be placed upon the young shoulders of Callum Hudson-Odoi, although his impact will be delayed as he recovers from a ruptured Achilles injury sustained against Burnley earlier this weekend.

And then there is Christian Pulisic.

Chelsea signed the poster-boy of American football in January from Borussia Dortmund but loaned him back to the Bundesliga side until the end of the campaign.

It was a decision based on two factors. The first is that BVB were in the midst of a title challenge and they didn't want to lose Pulisic. The second is the 20-year-old would've been dropped into the Blues' already crowded pool of wingers, where he would've competed for a place with Hazard, Hudson-Odoi, Willian and Pedro.

First-team football would not have been guaranteed for the United States international at Stamford Bridge. He would be afforded more opportunities at Dortmund. Or so was the school of thought.

“I am really happy with my decision,” Pulisic said in an interview with ESPN in January, just days after the transfer was confirmed. “I have no regrets and I”m really excited. The best thing is that I get to finish out the season here (at Dortmund) strongly and then I can think about the next step.”

Unfortunately, injuries and the form of Jadon Sancho has forced Pulisic out of the Dortmund side since January. He has played just 159 minutes of Bundesliga football since New Year's Day, 90 of which came against Hertha in March. 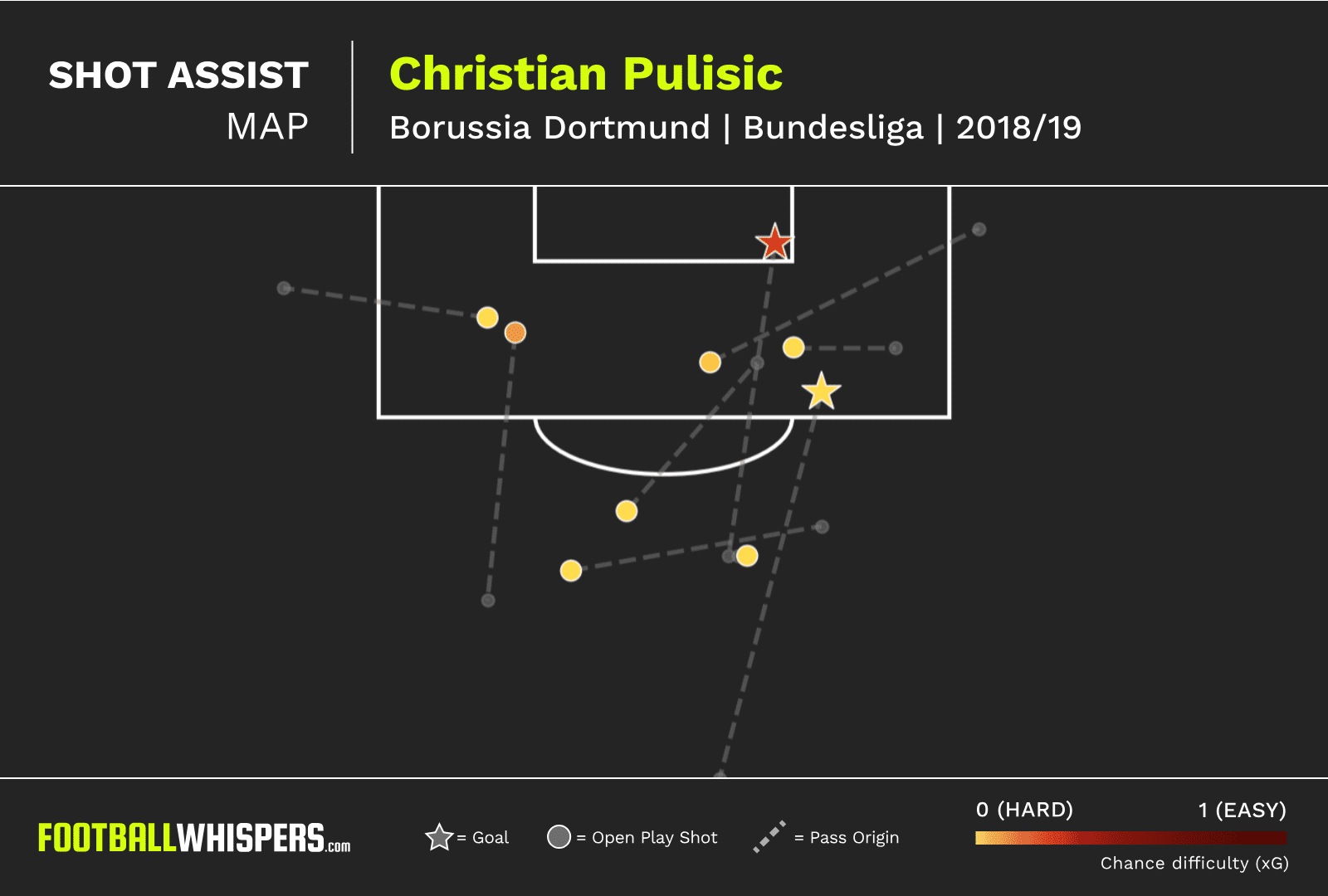 The American did start BVB's Champions League last-16 first leg defeat to Tottenham Hotspur at Wembley but was benched for the return match in Dortmund, only introduced when Spurs had an unassailable 4-0 aggregate advantage.

It's evident Lucien Favre favours other options over Pulisic. And Chelsea perhaps made an error by keeping him at Dortmund for the remainder of the 2018/19 campaign once a deal had been struck.

However, when he is afforded an opportunity on the pitch, the young winger is still making an impact. Pulisic is creating 0.42 big chances per 90 minutes in the Bundesliga this term. For context, that is just below Sancho and Dortmund skipper Marco Reus (0.45).

He is also completing 3.78 dribbles per 90, the second highest figure among the Dortmund squad. Only Sancho (3.82) can better the USMNT star. 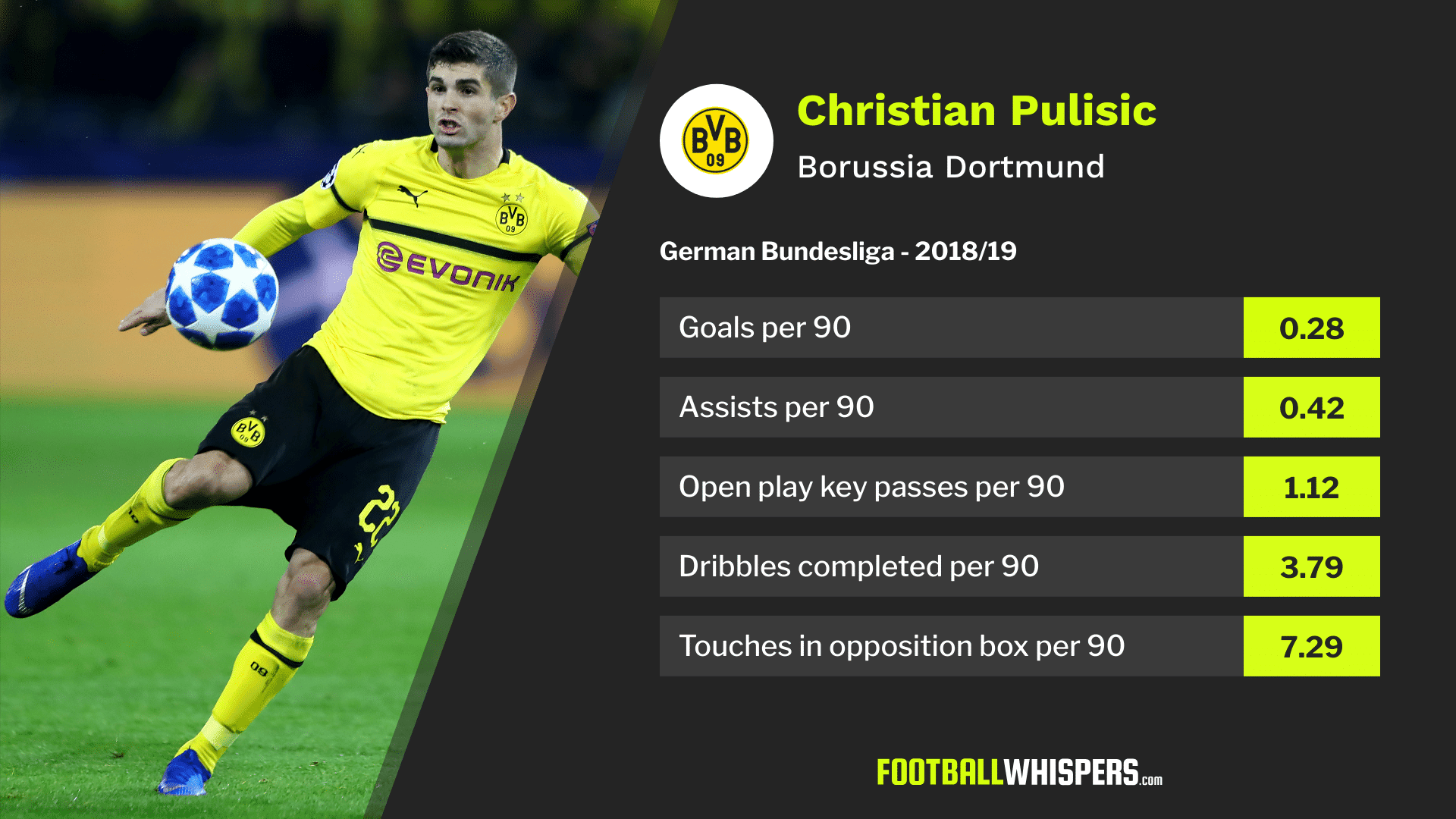 Pulisic's 644 minutes of league football this term is a small sample size but the above – coupled with his five goals and five assists in all competitions this season – does prove he is a consistent threat in the final third.

The challenge for Chelsea's coach, which may or may not be Sarri, is to hone his directness with the ball and harness his undoubted potential. Pulisic is still fairly raw, which is why many questioned the Blues for spending £58million on the 20-year-old.

“It will be my first time switching clubs,” Pulisic added in his interview with ESPN. “I imagine when I first go in I'll have to earn the respect of the guys and earn my spot. Every training session or in any game, if I get an opportunity I have to take it. I have to prove to them I'm worthy of being in that team.”

And through circumstance – Hazard is expected to join Real Madrid and Hudson-Odoi is set to miss the start of next season due to his Achilles injury – Pulisic should have an opportunity to stake his place in the starting XI.

There will be pressure on him to hit the ground running, to help fill the large Hazard-shaped hole in the Blues side, should he leave, of course.

Yet pressure doesn't appear to faze Pulisic. Perhaps because he's lived with it for his entire adult life. He is the man the United States pin their soccer hopes on. The man a nation will hope can drag them to Gold Cup success this summer.

That maturity and willingness to accept responsibility will serve him well at Stamford Bridge. There will be plenty of uncertainty and upheaval at Chelsea this summer but in Pulisic the club have a player who will handle it all with ease.