Christian Eriksen’s time with Tottenham Hotspur appears to be coming to an end. After six years with the beaten Champions League finalists, the Danish playmaker has revealed he feels it is time for a new challenge.

Speaking to Ekstrabladet, the 27-year-old, who is out of contract in 2020, opened up about his future: “I have the wildest and deepest respect for everything that has happened in Tottenham, nor will it be negative. But I have also said that I would like to try something new.”

His departure would leave Spurs with a void to fill. Since the start of the 2016/17 campaign, no player across the top five European leagues has more assists to their name than Eriksen (37). The next best in the Premier League after Eriksen is Manchester City star Kevin de Bruyne (36).

The brilliant Belgian cost City £55million and that was before Neymar's move to Paris Saint-Germain saw transfer fees spike. It's safe to say replacing Eriksen is going to be a costly process. Not just in terms of money, either.

He's been a key part of Mauricio Pochettino's starting XI, one that has developed into Champions League knockout stage regulars. While Heung-min Son are often those in the spotlight due to their match-winning goals, the Spurs No.23 is the man providing the ammunition they need.

There are replacements out there, however. And as talented as Eriksen is, he isn't as unique as others out there. Spurs, armed with the money recouped from selling their £11million buy from Ajax, could upgrade their squad if they spend shrewdly.

The big question is whether or not the Denmark international is ready to make a move to an elite club? A Real Madrid or Barcelona, for instance.

On paper at least, Eriksen's numbers appear impressive. Yet his assist output far exceeds his expected numbers – he is ranked 16th for expected assists in the Premier League over the past three seasons.

It's still an impressive achievement, but the question is can Eriksen outperform to such a degree if he was a cog in a system as opposed to effectively having an attack shaped around what he is good at? 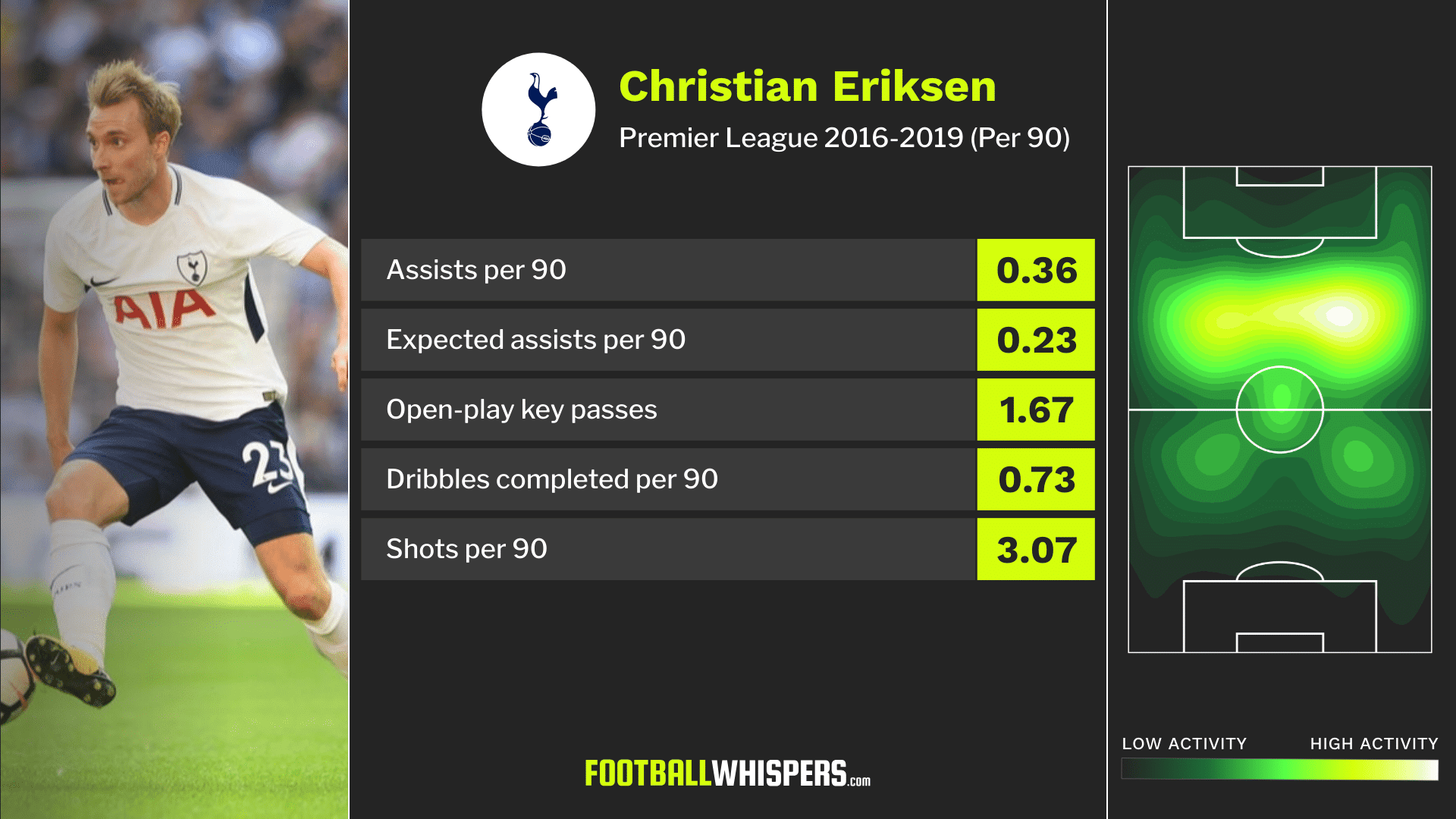 He's played a variety of roles for Spurs throughout the years and his versatility does make him an attractive option for clubs. His most productive seasons, though, have come playing in the three behind a forward.

The 2016/17 campaign saw him finish with 15 assists in the Premier League, but only eight goals. The game is changing and those who play in the final third now have to score more goals than they create.

Eriksen, while managing a decent average of nine goals per season over the last three campaigns, doesn't hit the heights of other wide players for the very best teams.

While he could play in a midfield three, he lacks the dynamism teams want from their number eights. What he can do with the ball is remarkable, but there are ways to block off passing lanes and nullify a playmaker of his style. Unlike others, the likes of James Rodríguez, De Bruyne and Alex Oxlade-Chamberlain, wide players converted into central midfielders, Eriksen lacks that explosiveness to beat opponents.

All three of the aforementioned players average at least 1.3 dribbles on a per 90minute basis. They aren't limited to playing passes in order to create space, they can also beat defensive lines with their dribbling ability. It's an underrated key aspect of the modern game.

Eriksen spent a lot of time in midfield this season and his average dropped to 0.58 completed dribbles. It's a weakness the very best will recognise.

If a team plays to his strengths, Eriksen can certainly cut it at the very top. But very few of the best play in such a manner that would accommodate a player with his profile.

The elite teams want press-resistant individuals in the middle third and goalscorers in the attacking third. The Spurs man, as is, is neither.