Christian Eriksen is a distraction for Tottenham Hotspur.

The club are, according to The Guardian, unsure of the Danish playmaker’s plans after a breakdown in the relationship between chairman Daniel Levy and Eriksen’s agent. With the European transfer window soon coming to a close, the midfielder's decision will be revealed sooner rather than later.

However, the fact the 27-year-old is still at the club muddies what was once clear waters for Mauricio Pochettino. Eriksen was one of the Argentine coach's favourites but he's started just one of Spurs' opening three Premier League fixtures.

With Eriksen’s future uncertain, it makes no sense for Pochettino to include him. Until it’s sorted, the Denmark international is a luxury at best. At worst, he’s the poster boy of a potential civil war.

In one corner there is player power; Eriksen made it known earlier this summer he wanted to leave. In the other, a stubborn chairman who is a notorious negotiator.

Levy doesn’t want to be perceived as weak so won’t let the former Ajax man leave on the cheap.

It’s a scenario played out at many clubs. What’s different at Spurs is that Pochettino is reluctant to play Eriksen. And that is the problem.

If the beaten Champions League finalists struggle with the Dane on the bench then the pressure is on the former Espanyol tactician to bring him on. It happened against Villa and he turned the game on its head. He didn’t have quite the desired impact against Newcastle United but he was still brought on in an attempt to save the tie.

Injuries mean Pochettino can’t just exile Eriksen. He’s too good not to be considered. But with him seemingly eager to leave, Spurs need to move away from their reliance on him to influence games.

The sooner Giovani Lo Celso is up to speed with Pochettino’s demands, the better.

The Argentine maestro has just over 30 minutes of Premier League action under his belt. He's yet to make a telling contribution to the Spurs cause but the quality is there.

It's when rather than if the former PSG midfielder begins to pull the strings for the team. 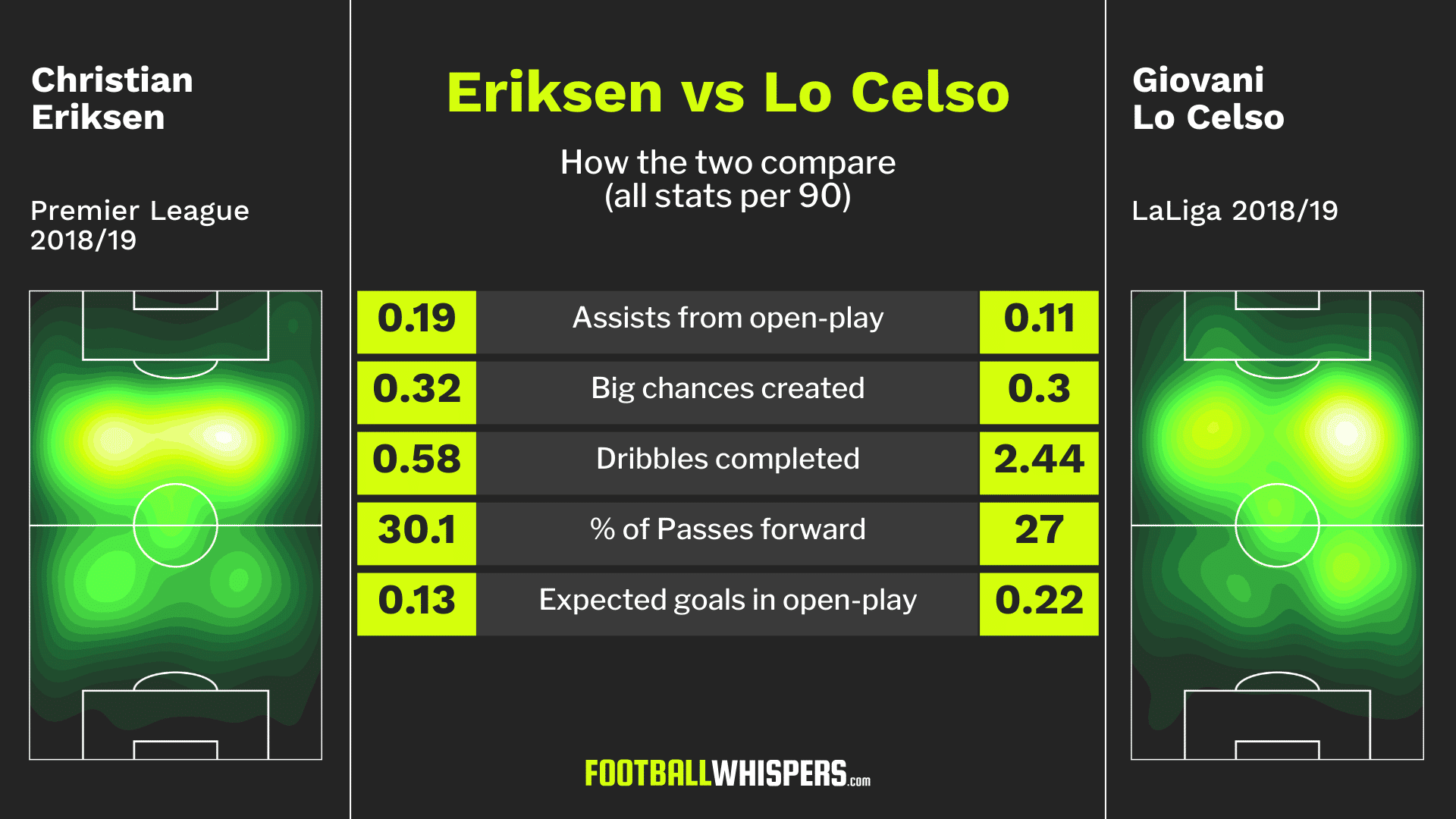 Though not a direct replacement for Eriksen, the 23-year-old does share some similarities with the Spurs No.23.

Last season both created a similar number of big chances – 0.30 or over per 90. And the playmakers made sure at least 25 per cent of their attempted passes went forward, highlighting their incisiveness.

Lo Celso trumped Eriksen when looking at goal threat in open play, 0.22 to 0.13, but fell short when comparing expected goals assisted, 0.11 to 0.20. The big difference between the two is their use of the ball.

Whereas Eriksen likes to pick passes, Lo Celso is a confident dribbler and this is how he progresses play. If the ex-Real Betis star stays true to himself and looks to beat opponents for Spurs, he could be a transformative addition to a team struggling to break down compact opposition.

Pochettino's side have taken 15 points from their last 15 Premier League matches. Despite passes in the opposition half increasing, along with shots, expected goals have dropped off.

For all of Tottenham's possession, opponents are finding it easy to manage the situation, especially in the absence of Dele Alli as few members of the Spurs midfield are capable of either carrying the ball or running ahead of it to create space.

Lo Celso's favoured approach gives Spurs an added dimension going forward. He makes them trickier to stop, harder to contain and near impossible to plan for. His press-resistance, alongside Tanguy Ndombele's in the midfield third, allows Pochettino's side to create transitional situations even when teams sit back.

Lo Celso could be the cure-all for the woes at the Tottenham Hotspur Stadium right now. A replacement for Eriksen and the skeleton key needed for Spurs to get out of their slump.