It can't be too easy being Christian Benteke at the moment.

The Belgian only scored three times last season, one of which – his only goal at Selhurst Park during the 2017/18 campaign – was from the penalty spot.

“I do not say it's the fault of others,” he said in April. “I'm clumsy, lack the lucidity, lack of success too. But I will work.”

He undoubtedly did, but it hasn’t worked out. He missed out on Belgium’s impressive World Cup campaign in the summer and now he's recovering from minor knee surgery that he had at the start of the international break.

“If I had to miss [the World Cup], it would hurt me but I would recover,” he said in the same interview in April.

“For my family, my family, my cousins, it would be different. It is also their dream. It's not an individual sport where I'm alone. The more time goes, the more pressure I will feel because they want it to work again for me, for me to be there.”

But Benteke wasn’t even really bad. Just out of form.

The unluckiest striker in Europe?

In 2017/18, Benteke got chances worth 0.41 expected goals per 90 minutes, a rate that was in the top quarter of strikers in the Premier League.

If he matched his open-play expected goals, he’d have hit double digits (just). Yet he scored just two.These are all the shots he didn't score. 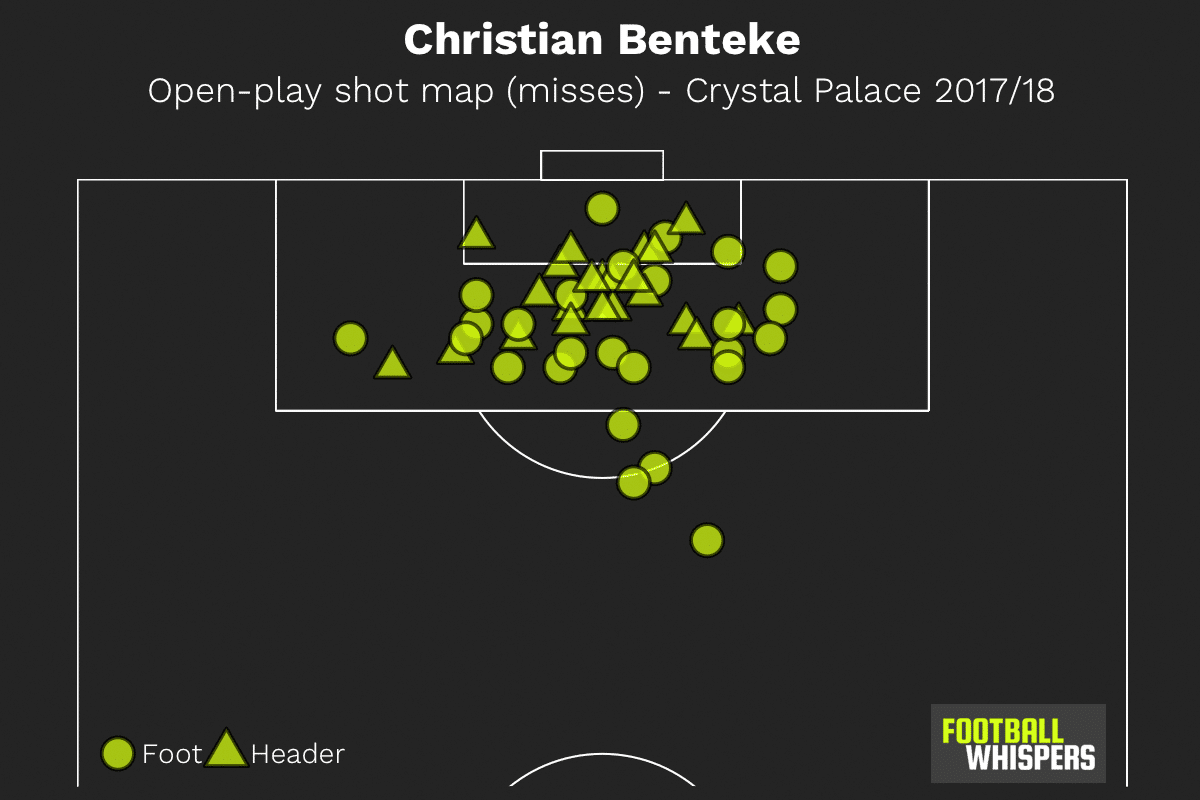 The eight goals Benteke left on the table in 2017/18 is the biggest underperformance of expected goals across a season in Europe's top five leagues that Football Whispers has on record.

These things admittedly happen. They're rare but they happen. There were another three players that year who underperformed by over seven expected goals.

Two of these players, Lorenzo Insigne and Karim Benzema, have returned to normality. The third, Emmanuel Rivière, was relegated with Metz last term and has vanished from data-view.

Benteke, though, is still struggling.

He’s racked up chances worth 2.32 expected goals so far this season but is yet to break his duck.

On a per 90 minutes basis, he’s got the ninth-best numbers of the strikers in the league. His underperformance of expected goals isn’t quite the worst in Europe – it’s the fifth-worst.

How did it come to this? In 2016/17, when he scored ten open-play goals, Benteke registered 10.05 expected goals. He was par for the course. 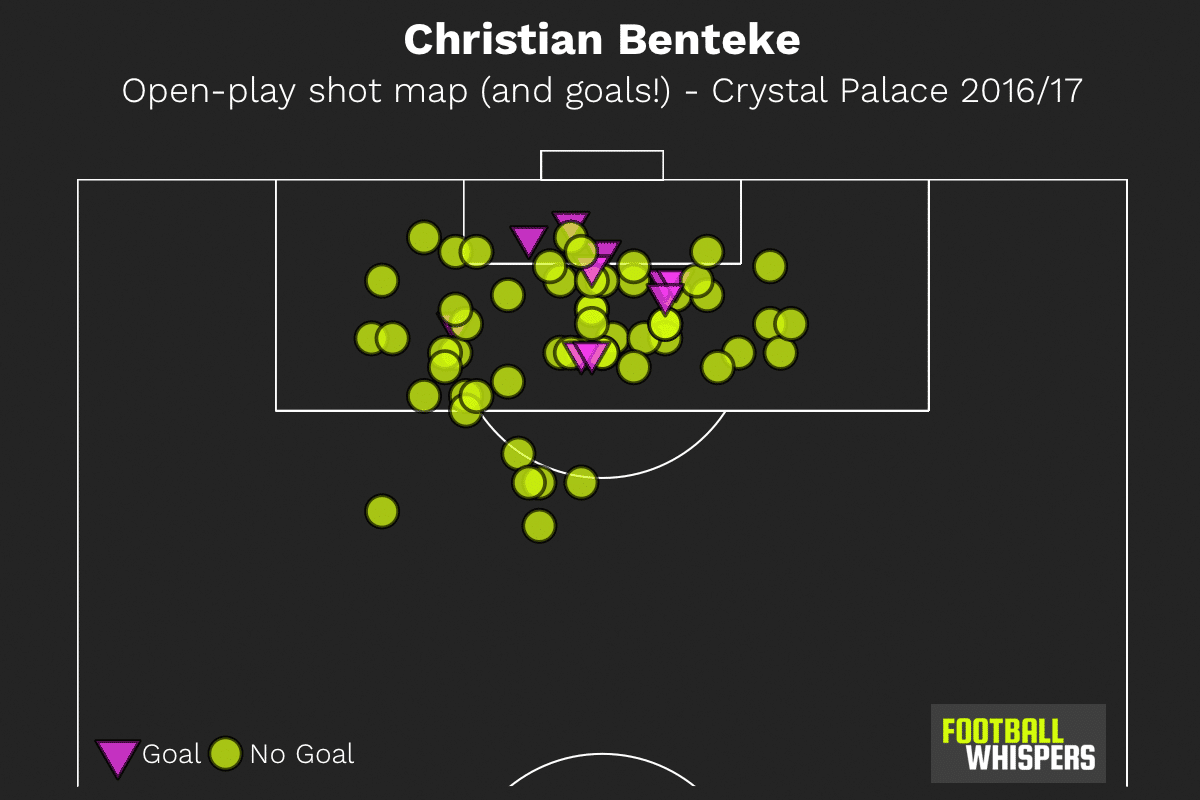 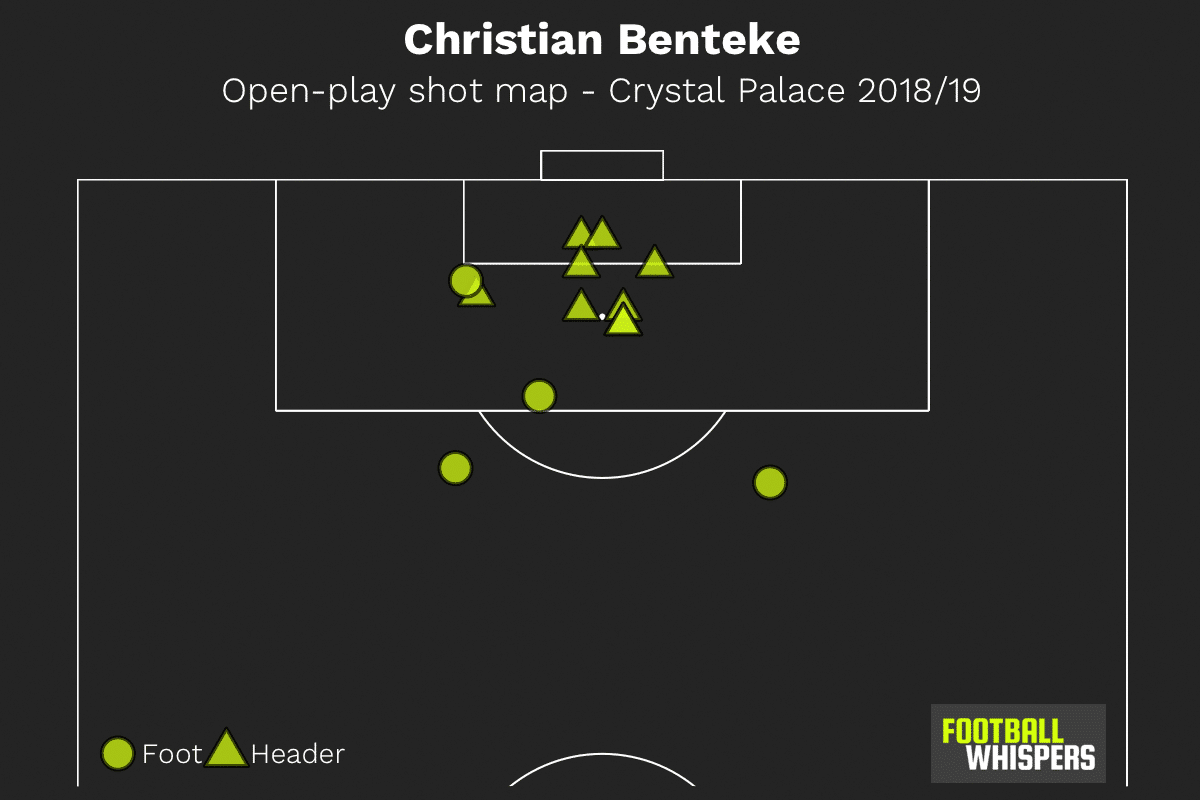 Perhaps, then, his chances during the current campaign have been harder than they’ve looked and his underperformance has been less severe.

It’s not much of a comfort, but would at least mean that he was only cursed in front of goal for a year instead of eighteen months.

If it is the case that his chances have been harder than they’ve looked, then that doesn’t really mean he’s more likely to start scoring again anytime soon. Strikers need service and if Benteke isn’t getting it then he’ll struggle to score.

These bad spells will have happened to strikers before, but there’s no-one on our records in recent years who’ve had as long a run of bad form as the Belgian.