It was back in 2014 that John Terry made a bold claim about one of Chelsea's rising stars.

The former Blues captain knows full well how difficult it has been for a member of the club's academy to follow in his footsteps and break into the first-team, so Terry would've chosen his words carefully.

But he said: “Believe me, I am sure that he will be a top footballer and one of the future men for Chelsea.”

The man he was talking about was then 18-year-old Andreas Christensen. Fast forward three years and Terry's prophetic words are ringing true. Chelsea believe the Dane is the future and he has signed a four-and-a-half-year deal to prove it.

The Dane returned to Chelsea this summer after two years away in Germany with Borussia Mönchengladbach. His spell with the Bundesliga club saw him mature from a precocious teenager to battle-hardened centre-back.

“I was a young player on loan,” he told The Telegraph. “It was what I wanted and it was good for me, big games against the best players. I was facing top strikers in the Bundesliga and that was a new thing for me. It helped me to know what will come in the future.”

It meant that when he was named in the starting XI by Antonio Conte against Manchester United at the start of November, there would've been no nerves. After all, he had impressed in his pervious appearances for the Blues this season.

Christensen was deployed in the heart of Chelsea's back three. He was in the side after Conte decided to drop David Luiz from his match-day squad. It was a bold call from the Italian and put more pressure on the young defender.

Did he buckle? Not a chance. Christensen was excellent against United and Conte admitted after the game that Luiz now has to work harder then ever to get back into the starting XI.

Christensen, even at 21, is ready to be a leader in Chelsea's defence. The old adage that if you're good enough, you're old enough certainly is true with the centre-back who joined Chelsea at the age of 15.

However, up until the United game, the young Dane was far easier to leave on the bench than Brazilian international and household name Luiz.

Dropping frequent England starter Gary Cahill would've caused problems while Antonio Rüdiger cost Chelsea more than £30million this summer, too, so there will be pressure from above for him to play.

But Conte is no fool. Christensen has the potential to be better than the three players mentioned above. But he needs to play regularly, to gain further confidence and continuing improving.

So who should he replace and where should he start? The answer lies in the statistics.

Against Manchester United, Christensen, playing in the middle of the back three, completed nine defensive actions (tackles, interceptions and clearances).

That figure was equal with César Azpilicueta but higher than Cahill and more than Luiz had managed in a Premier League game all season when playing in the back three prior to the United game.

But that isn't even Christensen's best defensive display for Chelsea. In the 2-1 win at Wembley against Spurs in August, he was again deployed in the heart of the Blues defence with Luiz playing in midfield.

For much of that game, Chelsea played on the back foot. They let Spurs have possession before countering at speed. It meant Conte's side had to defend well and Christensen again stood out. He completed an impressive 13 defensive actions, again the most of any Blues player.

In both games it was clearances that made up the majority of Christensen's defensive work. He made eight against Spurs and six against City. It is proof of his excellent positioning and ability to judge where the ball will come into the penalty area against top-level opposition.

His reading of the game, especially at a young age, is reminiscent of the man who tipped him for the top. Few defenders were as good as Terry at knowing when to step in and make a challenge, when to apply pressure without making a tackle and when to retreat and take up a new position.

Christensen, however, has that same nous and skill. In the stills below, taken from Chelsea's League Cup win over Nottingham Forest, the 21-year-old reads the direction of a pass forward and slides in to intercept. 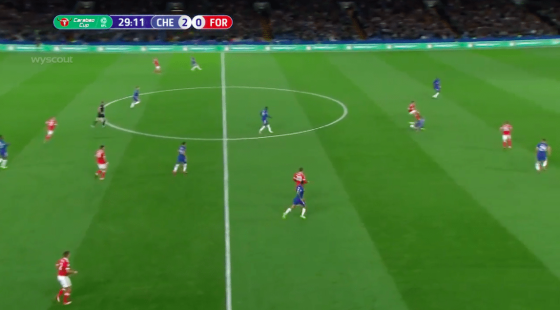 Not only does he win back possession, but Christensen keeps control of the ball and quickly distributes it on to the Chelsea midfield who are able to instantly launch an attack. 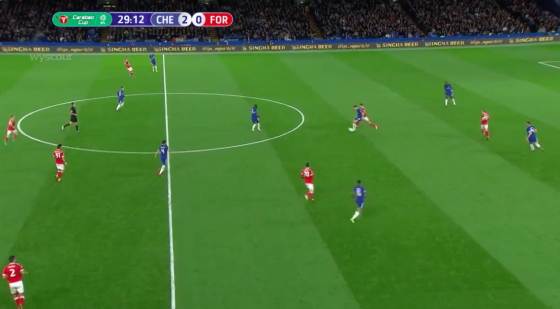 Distribution from the back is a big weapon in Christensen's armoury. He is composed on the ball and has the vision to pass through the lines. So far this season he has completed a 93.9 per cent of his passes in the Premier League, again a team high for those who have made more than a solitary appearance.

And the former Brøndby youngster isn't just playing safe around the back. He attempts 2.7 long passes per game in the Premier League from his average of 47.9 passes played a match, although those numbers are significantly lower than Luiz (4.6 and 51.1) and Rüdiger (3.5 and 67.2).

Christensen may be trying to limit potential mistakes. He is still proving himself at Chelsea so won't be taking as many risks as Luiz or Rüdiger, both of whom are entirely confident of their place in the first-team squad.

Tellingly, while at Gladbach, where he was an established starter, Christensen averaged 62.3 passes per game in the Bundesliga. His passing accuracy was 91.3 per cent, too, so given time he's likely to replicate those figures at Stamford Bridge.

Christensen needs to start regularly and should do so in the heart of Chelsea's back three. He has proven himself against the best in the Premier League and has clearly won Conte's trust.

“Andreas is a brilliant footballer,” Terry said three years ago. “I have always told him he should chase me and try to knock me out the team. He should be hungry to take my place.”

Terry's words may again ring true. While he moved on this summer, Christensen returned. And the Chelsea No.27 has displayed many of the same qualities that the legendary No.26 showcased during his time at Chelsea.

There may just be a new captain, leader, legend on the horizon at Stamford Bridge.