Having won the Premier League last season, Chelsea went into this summer’s transfer window intent on strengthening their squad for a title retention and progress in the Champions League. So far, they have spent well to bring in three major additions.

Antonio Rüdiger arrived from Roma for just under £30million to bolster the English champions’ back line; Tiemoué Bakayoko joined from Monaco for £40million to add another option in central midfield; while Álvaro Morata signed from Real Madrid for £58million to provide a fresh injection of quality up front.

Far from being mere squad members, however, the trio can reasonably be expected to boost Antonio Conte’s 3-4-2-1 system. Not only do they each fit perfectly into the Italian’s preferred shape, but it could be argued that they are improvements upon their positional predecessors.

During his two years in Italian football with Roma, Rüdiger matured into a fine all-round centre-back. Having arrived a raw and inexperienced talent who appeared uncomfortable under pressure, he left a solid defender at ease pushing forward with the ball at feet.

The 24-year-old German is a fine fit for Conte primarily because of his tactical attributes. He is a versatile operator who can play virtually anywhere across a back three or four; indeed, he occasionally acted as a right wing-back while in Italy. This gives the Chelsea boss vital options should he wish to tinker with his formation.

However, if the 3-4-2-1 does remain the system of choice, Rüdiger will be an excellent addition to the defensive line. He will compete with César Azpilicueta and Gary Cahill for a place in the back three, and he is well prepared to secure a starting berth.

A fast and powerful presence, he covers ground quickly and is also a formidable aerial obstacle for opposition forwards. He averaged 1.7 tackles per game last term – more than Cahill – and should improve Chelsea’s build-up.

Rüdiger isn’t the most assured passer, which is perhaps why his pass success rate last season was lower than both Cahill and Azpilicueta. But, with David Luiz acting as Conte’s quarter-back, this isn’t such an issue.

What will help is the German’s 0.6 average dribbles, a statistic that highlights his ability to drive into midfield when required. With his combination of strength, acceleration and increasingly astute decision-making, he could help to commit opposition markers and free up space for his new attacking team-mates.

Rüdiger’s ideal position would be on the right of Chelsea’s back three. This is a role he often took up while at Roma, and it suits his skillset. Azpilicueta is flexible enough to rotate to the left-hand side if necessary, meaning Cahill should drop out to make way for the new signing.

Perhaps the great risk of Conte’s 3-4-2-1 system is the fact that it only allows for two central midfielders in an age where three-or-four-man midfields are prevalent and teams are becoming increasingly aware of the benefits of counter-pressing.

This danger no doubt motivated the signature of N’Golo Kanté last summer, with the former Leicester City man bringing his unrivalled stamina and dogged defensive work to a midfield otherwise lacking bite and energy.

And similar reasoning seems to have underpinned one of Chelsea’s major signings this summer, too, with Bakayoko’s arrival from Monaco ensuring Conte has another stout midfield barrier to select in 2017/18.

The Frenchman gained recognition for his displays in the Champions League last season. Demonstrating remarkable tenacity and physicality, the 22-year-old quickly gained covetous looks from many a continental admirer. But he is more than a ball-winner.

Indeed, Bakayoko’s imposing frame, which is combined with a subtly good touch and composure under pressure, will bring important qualities to Chelsea’s possession game. Thanks to his combination of technique, strength and awareness, he is incredibly press resistant, something that could be crucial to a two-man central midfield.

The youngster will be expected to take Nemanja Matić’s spot alongside Kanté in Conte’s midfield, and rightly so.

That ability to hold onto the ball in tight spots will come in handy, providing Conte with a central midfielder capable of retaining and progressing possession effectively even when up against greater numbers.

It’s hard to make the case for almost any striker joining Chelsea and improving upon Diego Costa’s output. Last season, the fiery frontman was inspired, leading the line with controlled aggression, holding off defenders at will and finding the back of the net with unerring frequency.

So, when Morata’s arrival was made official after weeks of speculation, there was a feeling that his signature was only made due to Costa’s negative relationship with Conte, as opposed to any desire for tactical or technical improvement.

Statistically, there are numbers to support this belief. Last season, the former completed twice as many dribbles and passes per game, and created more chances.

However, Morata was dispossessed less, had relatively fewer bad touches, and had a higher pass success percentage.

Ultimately, the pair are different types of striker, and any numerical comparisons of the two deserve that context.

Where Costa likes to barrel through defenders, Morata befuddles them. Where Costa provides combativeness and strength, Morata provides pace and movement. Both are direct, but in different ways. Costa enjoys taking on his marker, whereas Morata looks to evade his and instead target the channels.

The new signing’s link-up play and mobility is perhaps what persuaded Conte that he was the man to lead the attack as of next season. The ability to drop off the frontline and combine, or to temporarily switch places with either of the inside forwards, Eden Hazard and Pedro Rodríguez, means opponents won’t have a reference point to focus on.

Morata may not fill the scoring void left by Costa, but he will bring his team-mates into play and confuse opposition defences more often. In doing so, he will only increase the goal threat presented elsewhere in the Chelsea line-up. 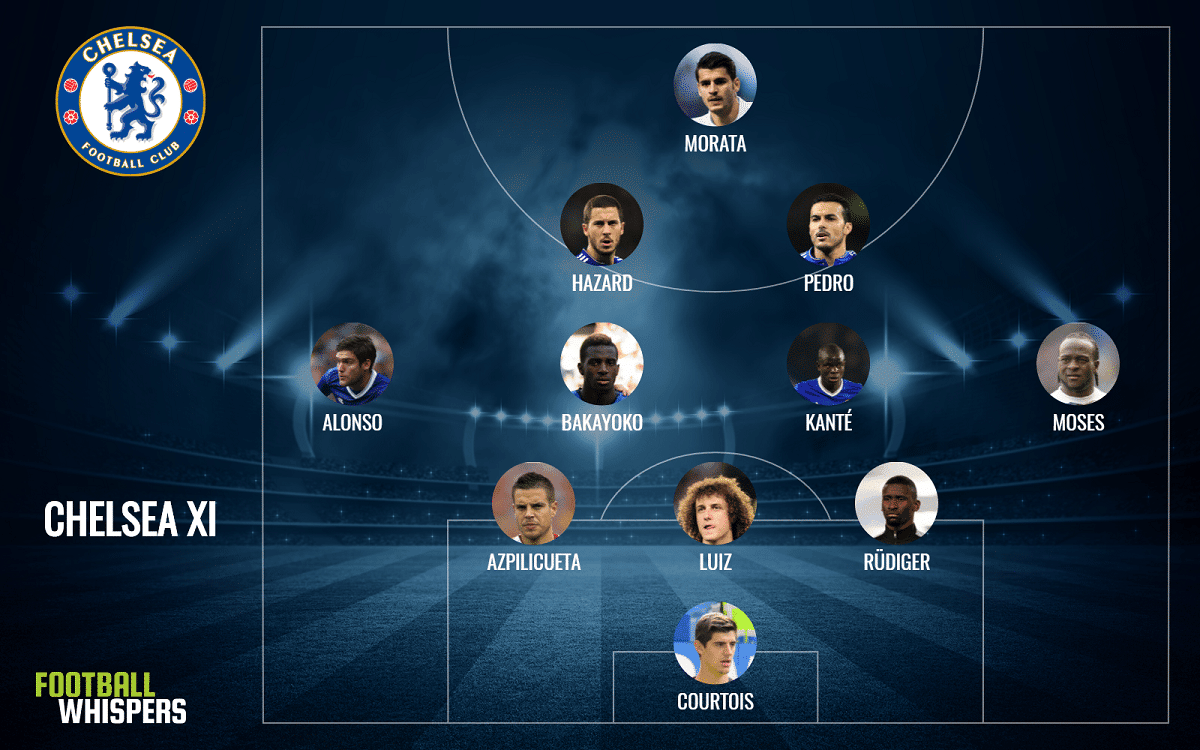