The Chelsea side that won the title in 2004/05 was one of the most dominant the Premier League has seen.

In Jose Mourinho's first season at Stamford Bridge, the Blues clinched the top flight trophy with a record 95 points and did so by conceding just 15 goals in 38 games.

It was a team packed with enduring talent but when John Terry leaves Chelsea this summer, no player from the Blues side who secured their first title in 50 years will remain.

So what has happened to players who made up one of the most strongest Premier League sides we've seen and where are they now? Well we've done some digging…

The Czech Republic goalkeeper arrived in the summer of 2004, having been signed by Claudio Ranieri midway through the previous season, and quickly usurped Carlo Cudicini as Chelsea number one.

He was imperious as the Blues romped to the title and was a key part of a defence that conceded just 15 league goals during the entire campaign – a record that remains to this day.

Čech was Chelsea's first-choice stopper for a decade, playing a huge role in the Blues' Champions League triumph, before being ousted by Thibaut Courtois at the start of the 2014/15 campaign.

He played second fiddle that season before leaving for London rivals Arsenal in the summer of 2015 with Chelsea's blessing.

He is the Gunners' number one but hasn't been able to produce the same consistent displays that defined his time at Stamford Bridge. 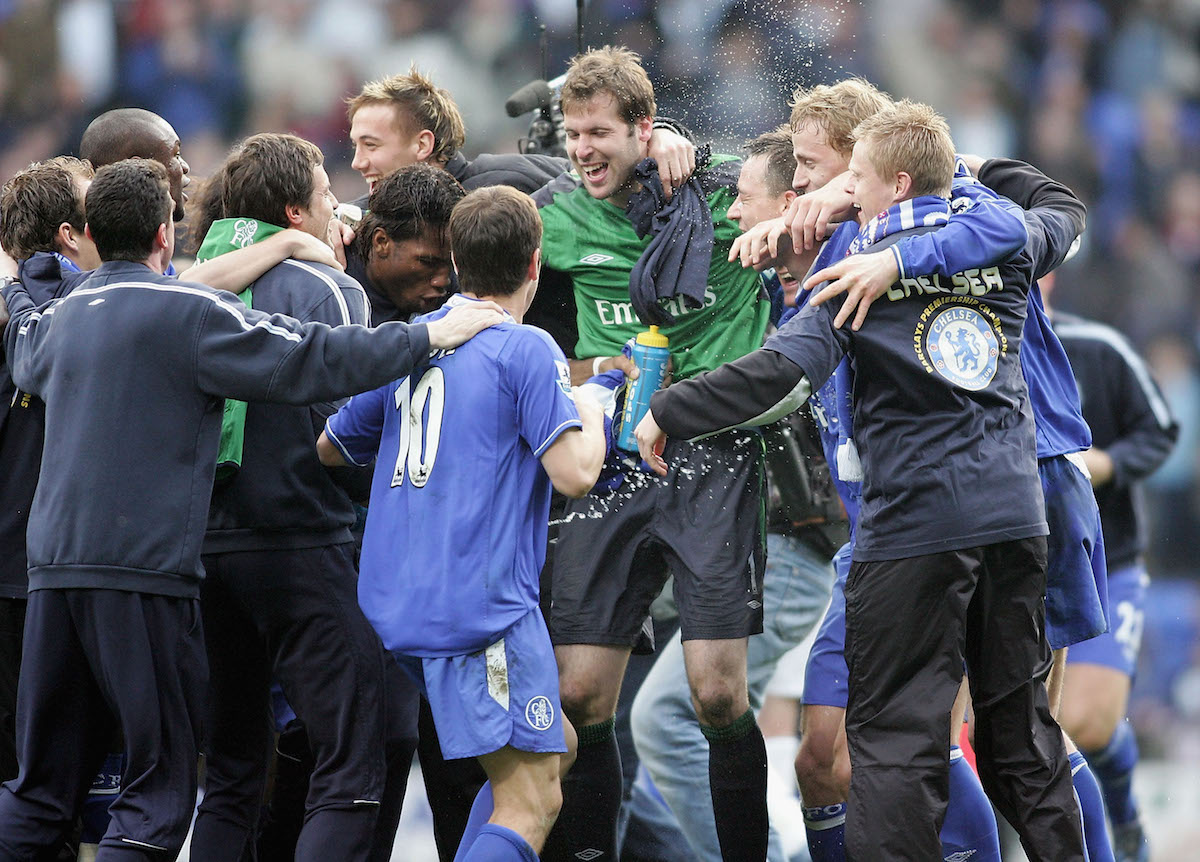 Ferreira followed Mourinho to Stamford Bridge following their Champions League win with Porto and quickly established himself as the club's right-back.

There wasn't anything flash about the Portuguese defender but he was reliable and a trusted Mourinho lieutenant. He'd follow any instruction to the letter.

Ferreira made 29 Premier League appearances for the Blues as they clinched the title and went on to win ten other major trophies with the club.

He retired in 2013 but remains with the club as a technical coach to their army of loan players.

Johnson ended up as Ferreira's deputy but did make 16 Premier League appearances during the campaign.

He never truly won over Mourinho, however, and was sold in 2007 to Portsmouth where he spent two years before joining Liverpool.

The right-back spent six seasons at Anfield before leaving for Stoke in the summer of 2015. He remains at the Britannia and has made 19 league appearances this season.

Another one of Porto's Champions League heroes who followed Mourinho to Stamford Bridge, the centre-back was in and out of the Blues side during his first season at the club.

He made 22 league starts in defence during the 2004/05 campaign before establishing himself as Terry's centre-back partner for seasons to come.

Left for Real Madrid, then managed by Mourinho, in 2010 before having a stint with Ligue 1 club Monaco.

At 38 years old Carvalho is winding down his career with Chinese Super League side Shanghai SIPG, although he was part of the Portugal squad victorious at Euro 2016.

The Chelsea captain is the only remaining player of the first Mourinho side, although he will leave the club at the end of the current campaign.

He played 36 times during the 2004/05 Premier League season and became the first Blues captain in 50 years to lift the top flight trophy.

Has won everything there is to win in England in addition to clinching Champions League and Europa League titles. He will go down as one of Chelsea's greatest ever players and undoubtedly their most successful captain. 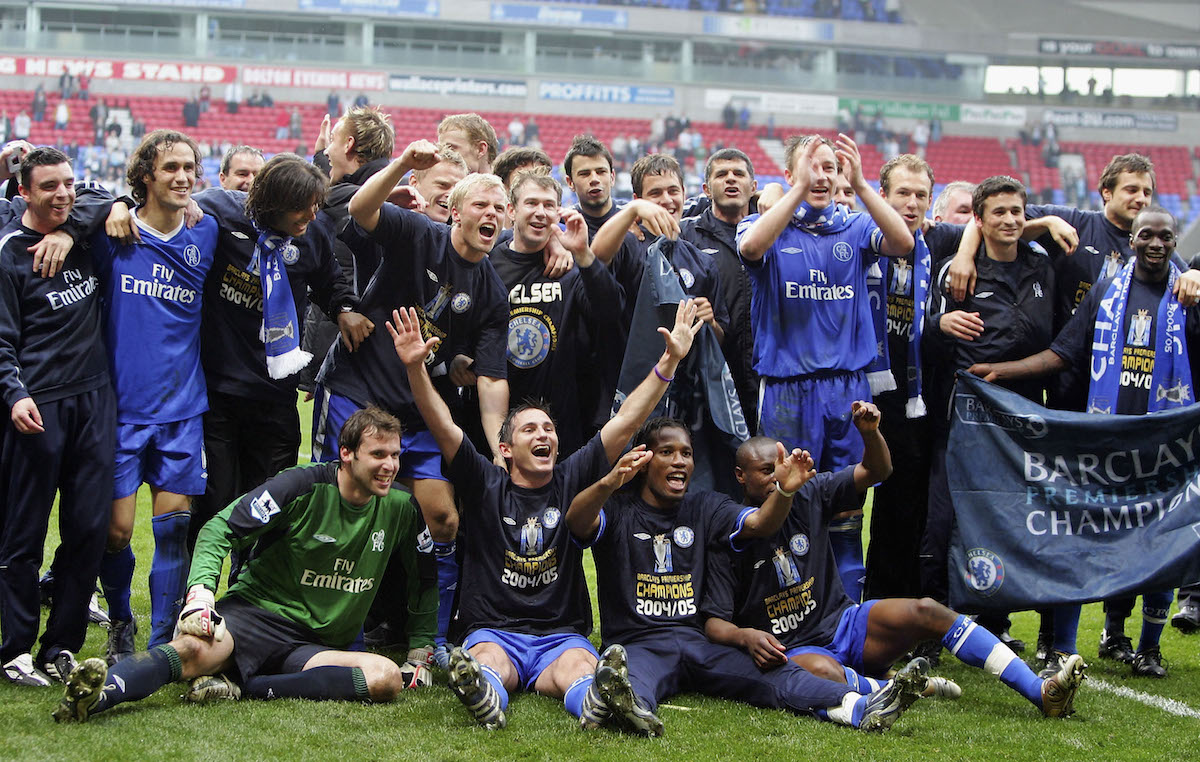 Read More: John Terry – A Premier League star like no other

The French defender had already spent three years at Chelsea prior to Mourinho's arrival, and played an important role in helping the Blues clinch the maiden Premier League trophy.

Gallas started at centre-back and left-back during the campaign, making 28 appearances in the league and scoring two goals.

He remained at Stamford Bridge until 2006 before controversially leaving for Arsenal as part of the swap deal which brought Ashley Cole across London.

Gallas was named captain during his four-year spell at the Emirates – although he would lose the role to Cesc Fàbregas – before joining north London rivals Spurs in 2010.

The Frenchman spent the final season of his career playing for Perth Glory in Australia. He is now retired from the game and is carving out a career as a pundit in France and England.

Chelsea's second-choice left-back during Mourinho's first season in charge but managed to make 25 appearances in all competitions.

He would spent six years at Stamford Bridge before leaving for Manchester City in 2009. Spells with West Ham United, Sunderland, Brighton and Hove Albion and Reading would follow before he retired in 2014.

Bridge is no longer involved in football but did appear on ITV reality TV series I'm a Celebrity…Get Me Out of Here! in 2016.

Signed by Ranieri the previous season but it was under Mourinho that the diminutive Frenchman really shone.

He sat at the base of Chelsea's midfield trio and was so effective that ‘the Makélélé role' became parlance in general football discussion. He made 36 league appearances for the Blues that season, scoring one famous goal against Charlton Athletic.

He remained at Chelsea until 2008 before retuning to France for a three-year spell at Paris Saint-Germain.

Makelele has since gone into coaching and, after an unsuccessful spell as manager of Bastia, is current assistant coach to Paul Clement at Swansea City.

The Russian midfielder made 25 appearances during Mourinho's first season in charge, 16 of which came in the league.

Smertin was only ever a rotation option but was a capable performer when called upon.

He left Chelsea in 2006, following loan spells at Portsmouth and Charlton Athletic, and joined Russian club Dynamo Moscow before spending the 2007/08 campaign back in west London with Fulham.

Retired at the end of that season and turned his hand to politics. In March 2009, Smertin was elected as an MP in the Altai region of Russia.

Earlier this year he was named Russian Football Union anti-racism and discrimination inspector ahead of the 2018 World Cup.

Another Ranieri signing who was a reliable squad member for Mourinho, the Cameroonian played at right-back or midfield during the campaign.

He made 20 appearances in all competitions, 13 of which came in the Premier League which guaranteed him a medal.

Geremi spent four years with Chelsea before leaving for Newcastle in 2007. Stints in Turkey and Greece followed before he retired in 2011.

He has remained in football following his playing career and is an executive committee member of the Cameroon Football Federation.

Was one of the stand-out performers of the title-winning side and it was his brace against Bolton Wanderers that clinched the title.

Lampard played every league game during the season and scored 13 goals. Under Mourinho's guidance he finished runner-up in the 2004 Ballon d'Or voting to Ronaldinho.

Lampard would go on to become Chelsea's highest ever scorer and will be remembered as one of the all-time greats of English football.

He had short stints at Manchester City and New York City FC after leaving Chelsea in 2014 and announced his retirement from the game earlier this year.

Lampard is currently taking his coaching badges while also appearing as a pundit for Sky and the BBC. He is also a team captain on ITV show Play to the whistle.

Mourinho signed the Portugal midfielder from Benfica and he became an important member of the title-winning side.

Tiago featured in 34 top flight games and scored four league goals, including a stunner against Manchester United at Old Trafford.

The 2004/05 season was his only with Chelsea, however. He left for Lyon in 2005 before spending four years at Juventus.

He signed permanently with Atletico Madrid in 2011 and has won six titles with the Spanish club.

The Irishman was one of the most exciting wingers in the Premier League prior to Mourinho's arrival and he only became more effective under the Portuguese.

Duff made 48 appearances in all competitions – 30 of which were made in the Premier League – as Chelsea clinched the league and Carling Cup.

He surprisingly left Chelsea in 2006 for Newcastle before retuning to west London in 2009 following a switch to Fulham, where he would help the club reach a Europa League final.

Duff had stint in Australia with Melbourne City in 2014/15 before retuning to his native Ireland and wrapping up his career with a spell at Shamrock Rovers.

He remains with the Irish club and is currently head coach of the Under-15s.

The midfielder was one of the most creative English players of his generation but he had to work hard to win over Mourinho, who wasn't impressed with his work ethic.

Even so, Cole made 29 appearances as Chelsea won the league and became more influential the following season as Chelsea retained the title.

Cole would spend seven years at Chelsea, the club he supported as a boy, before leaving for Liverpool in 2010.

However, he's struggled with injuries since and has jumped from club to club, having stints with West Ham, Aston Villa and Coventry City.

Moved to America in 2016 to join NASL side Tampa Bay Rowdies and is currently in his second season with the club.

The Dutchman was unable to make an immediate impact in Mourinho's first season due to injury but burst onto the scene in November with a string of impressive displays.

Robben, who suffered a second injury midway through the season, scored seven goals in 18 Premier League games to help the Blues clinch the title.

He spent three seasons at Stamford Bridge before moving to Real Madrid. Yet he stayed in the Spanish capital for just two years before departing for Bayern Munich.

He's become an icon at the German club over the last eight years, winning five Bundesliga titles and securing a Champions League triumph.

He remains a key part of Carlo Ancelotti's side and has made 31 appearances this season, scoring 12 goals.

The powerful Ivorian was signed from Marseille for £24million but while his first season at Stamford Bridge included the title win, he only scored ten Premier League goals.

Over the years, however, Drogba became one of Chelsea's greatest ever players and scored the winning penalty, having headed home a late equaliser in normal time, in their Champions League triumph in 2012.

He left the Blues in 2012 but returned two years later after spells in China and Turkey. He departed again in 2015 and spent two seasons with MLS side Montreal Impact.

It was announced last month that Drogba will continue his playing career with Phoenix Rising but would also be co-owner of the club. It makes the striker the first player-owner in professional football history.

Mourinho inherited the Icelandic striker, who was known for his guile and clinical finishing.

But with Drogba as his first-choice striker, Mourinho opted to put Guðjohnsen in midfield and it worked to good effect. He played 37 games in the league for the Blues and scored 12 goals.

Guðjohnsen moved to Barcelona in 2006 for £8million and won the Champions League with the club.

He was spent time at 11 different clubs from 2009 to 2016 before retiring after a spell in India with Pune City, for whom he didn't play a game.

Guðjohnsen is currently working as a pundit, which includes making appearances on Chelsea TV.

Signed following his goalscoring exploits with PSV, where he scored 105 league goals in just 122 games, it was anticipated Kežman would compete for the striker's role against Drogba.

However Kežman failed to repeat his goalscoring form in Chelsea's title triumph. He notched just four league goals and was sold at the end of the season to Atletico Madrid.

He remained three years with the club before moving to sides in Turkey, France, Russia, China and Ukraine.

After retiring in 2012 Kežman became an agent. He also spent time as director of football at Serbian club FK Vojvodina in 2013.