The Brazilian, signed for £30million in 2013, had fallen out of favour with Antonio Conte, who was also headed for the exit door. Valued by the Blues at £60million, the plan was to fund part of their summer spending with Willian's sale.

Barcelona and Manchester United both expressed an interest, but when the Catalans refused to meet the asking price and Chelsea refused to strengthen a Premier League rival, he remained at Stamford Bridge.

Now, 12 months on, Barça have somewhat surprisingly revived their interest. As per the Evening Standard, Chelsea have turned down £35million bids from the Spanish champions and Atlético Madrid.

Instead, the club are continuing negotiations with Willian over a new contract, with the winger's current deal set to expire next year.

Chelsea, however, are reportedly unwilling to meet his demands.

The key difference between this year and last, obviously, is the club's ability to reinvest in the squad. As things stand, they cannot sign anyone until next summer given their two-window transfer ban.

That, presumably, is the reason they're keen to keep Willian for the 2019/20 season.

However, he will turn 31 before the new season begins. Is it time for him to go? The money Barça and Atleti are reportedly willing to offer is considerable and, with Willian wanting an extra two years on his contract, the club will almost certainly be wrestling with the idea of showing him the exit door.

His departure would weaken the squad, of that there is no doubt. A busy, bustling presence on the wing, Willian has, through some dark and troubling times, often been the sole bright spark at Stamford Bridge.

He has twice been named Chelsea's Players' Player of the Year – for the 2014/15 and 2017/18 seasons – and was the most creative outlet en route to the Europa League triumph in May, notching seven assists.

Always willing to fulfil his defensive duties, too, he won possession in the defensive third on 39 occasions last term, ranking him eighth. To top it off, only five forwards could better his 0.28 expected assists (xA) per 90 mins and his big chances created per 90 of 0.42.

These numbers surpass those of Pedro, whose expected goals assisted and big chances created per 90 stood at 0.15 and 0.4 respectively.

Chelsea fans are certainly divided on the Willian conundrum. While some feel as though the club should grant him a two-year extension and sell next year, others want him out the door this summer, when his sale would almost certainly generate more funds. 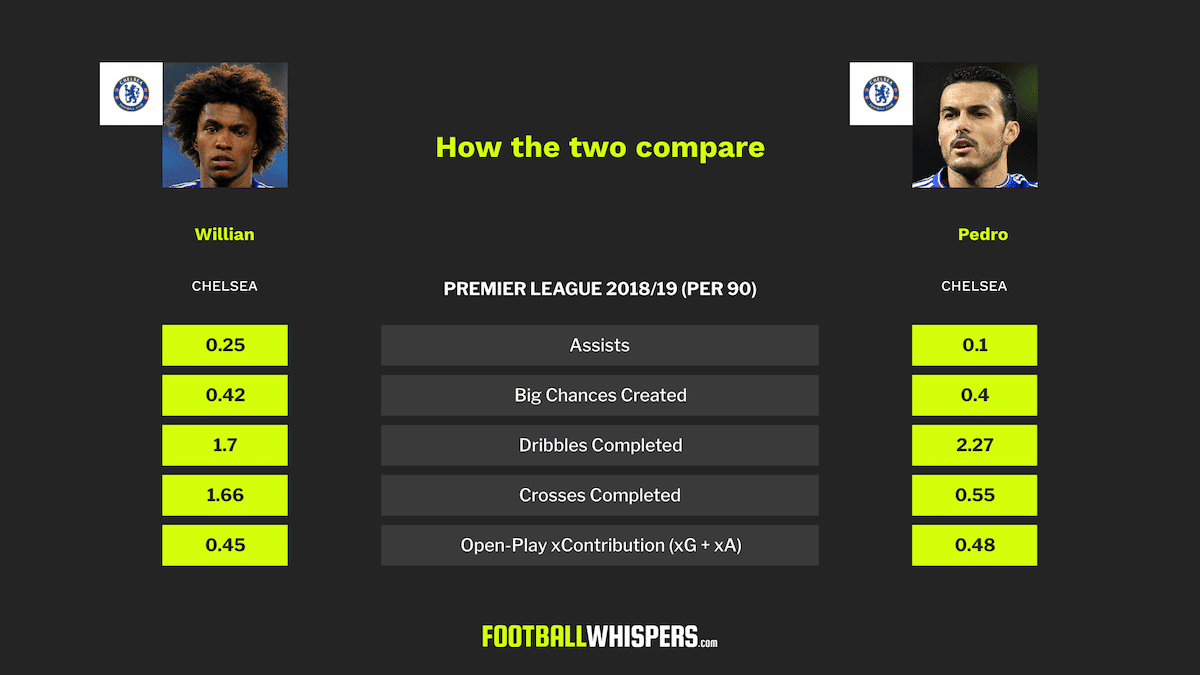 It is difficult, though. With Eden Hazard gone and Callum Hudson-Odoi injured for the foreseeable future with a ruptured Achilles tendon, Willian's departure would place significant pressure on Pedro and Christian Pulisic as Chelsea's two main wingers, assuming there are no regular first-team spots for Kenedy, who's just finished a disappointing loan spell at Newcastle United, and Charly Musonda, who has failed to make much of an impression at either Celtic or Vitesse Arnhem.

Given the current landscape at Chelsea, selling a player of Willian's experience would be a risk. His best years are not ahead of him, sure, but, with 13 assists in all competitions in 2018/19, it would be foolish to suggest the South American cannot offer something to Sarri's successor.

Selling Willian would seem like a no-brainer during an ordinary summer, but this is anything but for Chelsea. Hazard's gone, Sarri's gone and, at the moment, it doesn't look as though any new faces will follow Pulisic through the door.

For that reason, Willian needs to stay. For another year, at least.