Chelsea play host to non-league opposition in the 3rd Round of the FA Cup this weekend and the odds are stacked against Chesterfield pulling off one of the biggest upsets in FA Cup history.

These two sides haven't met before but we're expecting plenty of goalmouth action between the pair this weekend. Chelsea are challenging for the Premier League title while Chesterfield may well make it back into the football league this season but as things stand there is a vast gap between the two clubs, and we expect that to show on Saturday. Chelsea have bags of talent and goals in their side and even with changes to their starting eleven expected, we're backing over 4.5 goals to be scored in this game.

Timo Werner has not made the impression on the Premier League that most expected when he made the move to Chelsea, scoring just 7 league goals so far. The German forward came off the bench against Spurs last time out and we're expecting Tuchel to give him a starting role against Chesterfield. Werner is a very unselfish player but we expect him to be ruthless against Chesterfield this weekend and wouldn't be surprised if he went on to score a hat trick.

Can non-league Chesterfield pull off a major giant-killing?

Chelsea secured a decent advantage in their League Cup Semi-Final against Tottenham, winning 2-0 at Stamford Bridge on Wednesday night. Havertz opened the scoring after just 5-minutes and an own goal from Davies in the 34th-minute made it 2-0. Tuchel's men might have been disappointed not to have added further goals before the final whistle but are now in a commanding position heading into the 2nd leg at the Tottenham Hotspurs Stadium.

Chesterfield had the home advantage against King's Lynn Town on New Year's Day and made it count. Mandeville scored the only goal of the game in the 51st-minute to hand Chesterfield all 3pts and a place at the top of the National League table. With a game or two in hand on their nearest rivals, Chesterfield are one of the favourites to secure the title and promotion back into the football league and are bound to be full of confidence and excitement ahead of their trip to Stamford Bridge.

Chelsea: Azpilicueta, Christensen, James, Chalobah, Mendy, Havertz and Chilwell are all expected to miss Saturday's game for the hosts.

Chesterfield: Maguire, Carline, Clarke, McCourt and Rowe could miss the trip to the capital through injury. 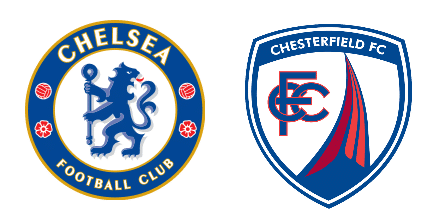