It had looked like this game would be a battle of the back threes; the confident, well drilled reigning champions against an Arsenal side looking to use the formation to regain some stability.

The shape has so far worked for the Gunners at home with wins against Leicester and Bournemouth, but it has struggled away from the Emirates, leading to a narrow loss at Stoke and a thrashing at Liverpool.

During their Europa League group stage encounter with FC Cologne, however, Arsene Wenger switched his formation at half-time to great effect.

Having gone a goal down early in the game when Jhon Cordoba lifted the ball over David Ospina following the keeper’s poor clearance, the French manager introduced Saed Kolasinac in place of Rob Holding, switching to a back four and changed the game.

Arsenal went on to score three goals and win the game comfortably, with the Bosnian substitute getting on the scoresheet to add extra weight to the idea that the manager’s changes won them the game.

“The boss had to change the tactics and it worked in the end. Sead came on, it gave us a boost,” said Hector Bellerin, who moved from wing-back to full back.

When half time adjustments change the outcome of a game, there is always the argument that the manager should have started with this setup in the first place.

Now Wenger faces the dilemma of whether to return to a back three against Chelsea, matching Antonio Conte’s side, or stick with the back four formation which enabled them to claim victory against Cologne.

Arsenal’s back four seems to help their own attackers, and getting the best from Alexis Sanchez and Mesut Ozil while they are still at the club could be their best hope of returning to the top four.

In the first half against Cologne their back five was left exposed. It consisted of one line of defenders with little support from those in front of them.

The three or four in midfield — depending on whether Theo Walcott, Sanchez, or both tracked back — were of little use when it came to protecting wide areas, and they were to compact in the centre to help spring a counter. 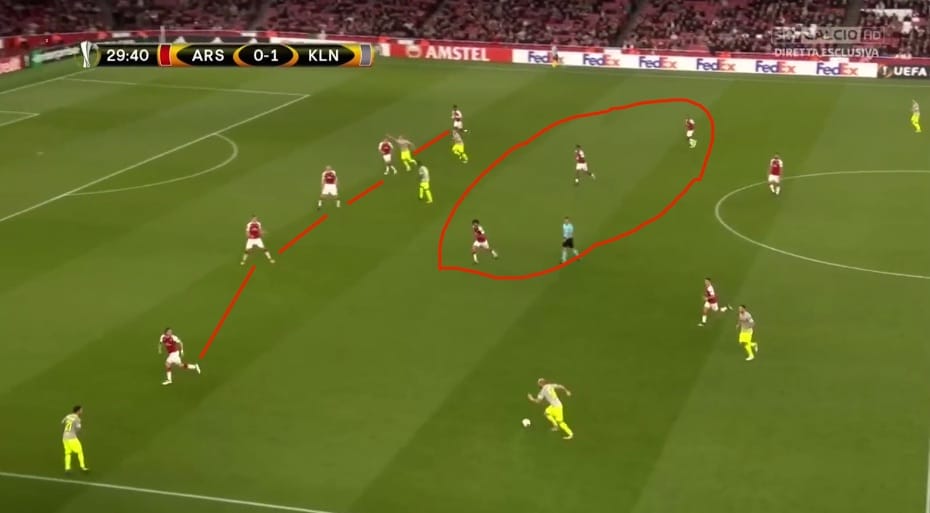 The opposition wide players had plenty of time to weigh up their crossing options, and shortly after the image above, the ball was sent in behind the Arsenal defence with Petr Cech only just managing to collect the ball.

In the second half the midfield were more spread out, able to support the full back by shifting across to the side of the ball, and also providing an option of a short pass through the lines to spring a counter attack. 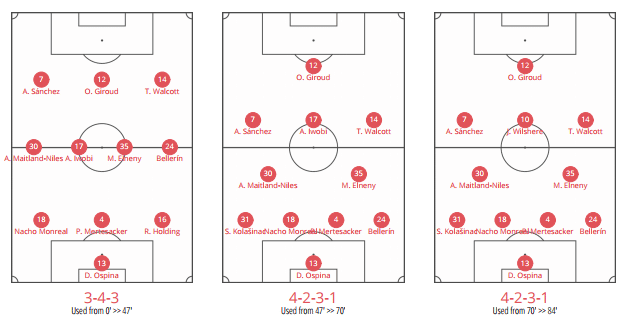 The two attacking midfielders perform the dual role of protecting the midfield and the wing-backs, and will look to break quickly if the ball is won back. Depending on which side the ball is on, one will provide cover while the other lurks ready to initiate a counter-attack.

In the image below Willian is making his way back to help right sided midfielder Cesc Fabregas and wing-back Victor Moses, while Pedro (bottom) is already looking forward to see where Álvaro Morata is in case the team win the ball back and can counter. 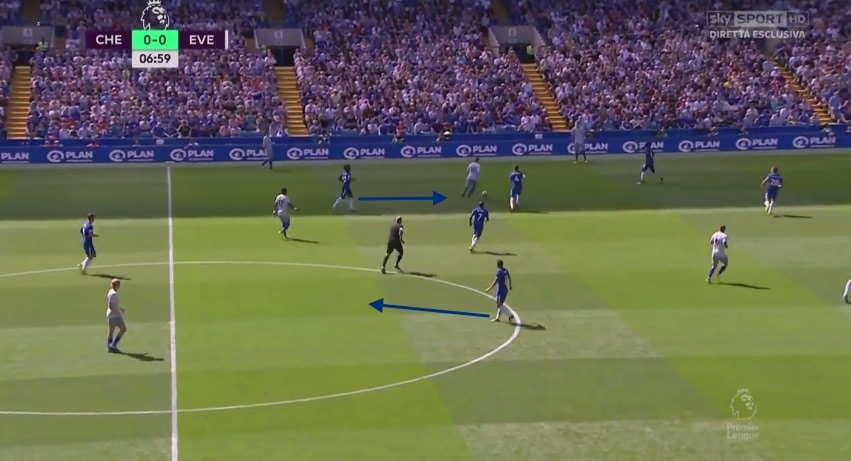 Conte has decisions to make when it comes to personnel, but regardless of the player the system stays the same, save for a 3-5-1-1 formation used against Tottenham.

Davide Zappacosta caught the eye in their easy Champions League tie against Qarabag in midweek, while a number of fringe players also got a run out and will be hoping it was more than a one-off, including the likes of Andreas Christensen and Michy Batshuayi.

While it will be tempting for Wenger to revert to the formation he’s used for much of the season, with mixed success, simply to match Chelsea, if he’s to match them man for man defensively a 4-2-3-1 might make more sense.

This would mean the two deep midfielders can take care of Chelsea’s attacking midfielders, leaving a spare centre back to nullify Morata.

For Chelsea the space could then come from the supporting midfielders in the centre of the park, who could find joy making late runs into the box while their wing backs occupy Arsenal’s full-backs. Though if the wide players in the three track back for Wenger’s side, leaving one three for the counter as Chelsea do, then it could be an interesting man-to-man battle.