The last meeting between Chelsea and Arsenal probably changed the outcome of the whole Premier League season.

The Blues' 3-0 defeat at the Emirates in September turned Chelsea’s season around, with Antonio Conte then changing the Blues’ system to a 3-4-3 formation, resulting in a club-record 13-match winning streak in the league.

Chelsea know that a win tomorrow lunchtime would kill off the faint hopes the Gunners have of winning the title, meaning their two meetings with Arsenal could arguably be their most pivotal games of the season.

An Arsenal win, though, would make a number of teams, including North London rivals Tottenham, think they had a chance of overhauling Antonio Conte's men at the top of the table.

If Diego Costa had scored a second-half penalty against Liverpool, the Blues would have been 11 points clear and probably out of sight.

But he didn't, and Chelsea go into the game hoping to show that was a temporarily blip in their push for the title.

The Blues do go into the game with 56 points from 23 games, knowing they'll finish the day at the summit of the Premier League regardless of the result.

Arsenal are third in the Premier League, nine points behind their London rivals.

Surely being 12 points behind the league leaders with only 14 games left would be an insurmountable mountain –  losing is not an option for Arsene Wenger.

Conte’s side have only lost once in 14 games at home in all competitions this season, while Wenger’s team has won nine of their 15 away matches. 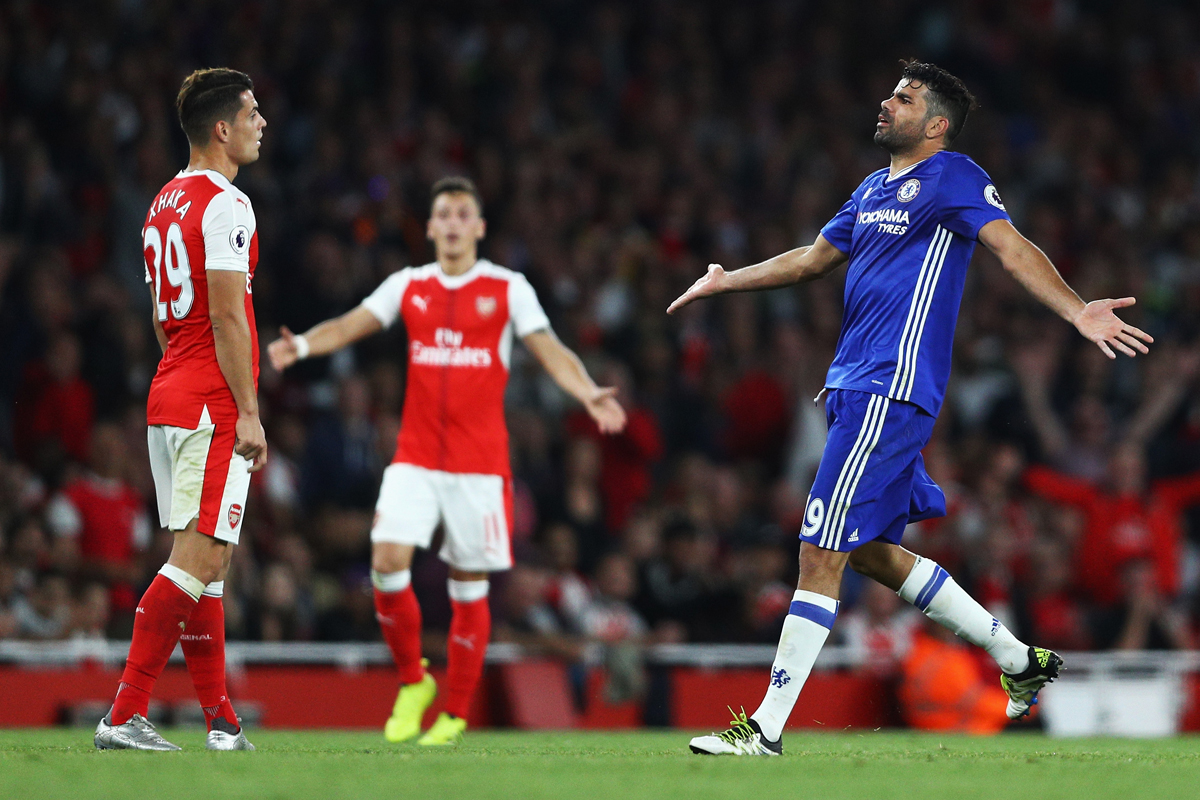 Chelsea have no known injury worries, but both Willian and David Luiz picked up knocks during Tuesday’s 1-1 draw with Liverpool.

The Blues also have no players suspended.

Arsenal will be without Santi Cazorla because of his Achilles injury.

Aaron Ramsey picked up a calf strain in Tuesday night’s defeat to Watford, while Alex Oxlade-Chamberlain suffered a knee injury in the same game.

Mohamed Elneny will miss the clash at Stamford Bridge as he is at the Africa Cup of Nations, while fellow Gunners midfielder Granit Xhaka is suspended until February 12 after receiving two red cards this season.

Chelsea go into this game having only failed to win twice in the league since that 3-0 defeat to Arsenal in September.

Their last five games in all competitions have seen the Blues win four times and draw once, scoring 14 goals and conceding just two.

The Blues have picked up 10 points from their last five Premier League games.

Arsenal have the same points total from their last five league matches. 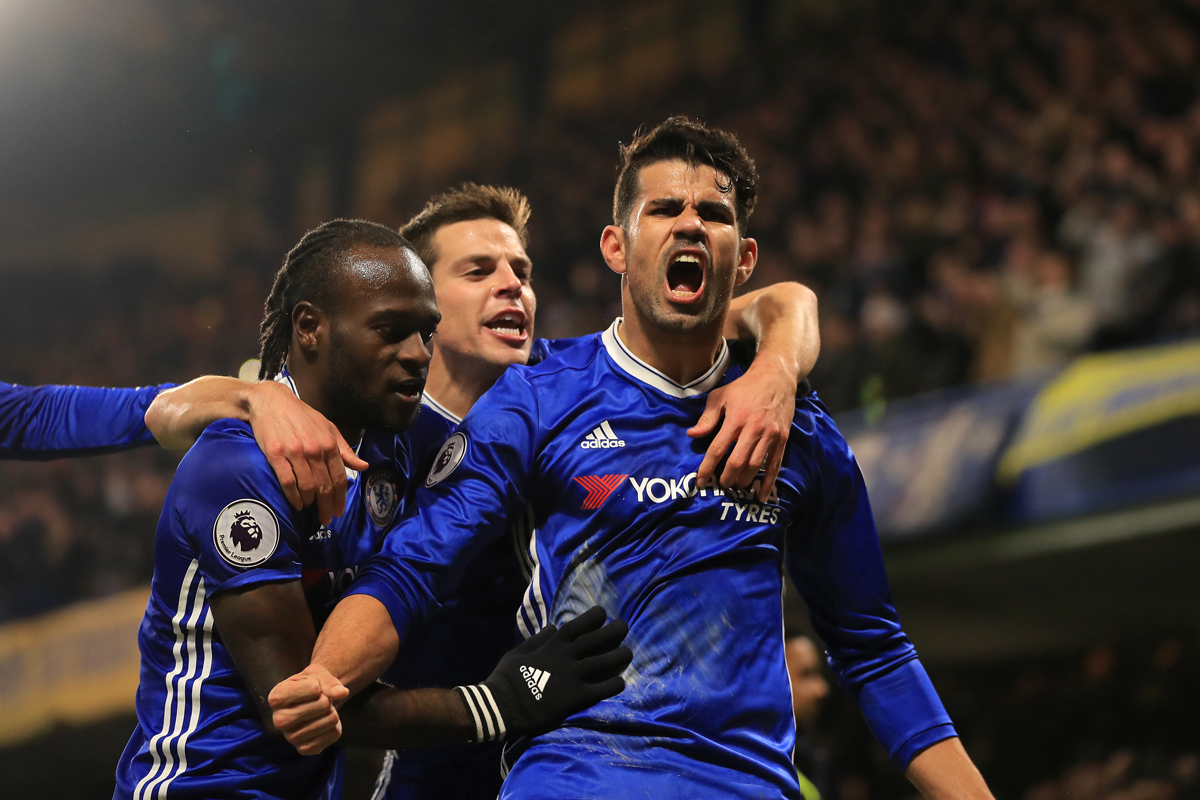 And like Chelsea, the Gunners have also won four times and drew once in their last five competitions.

In that period, they have also scored 14 goals, but conceded more goals than the Blues – four.

Chelsea’s 3-0 defeat by Arsenal in September was their heaviest against them since April 1997, which was also 3-0. Before that defeat, they were previously unbeaten in nine Premier League games against the Gunners, winning six and drawing three.

This match will be the 189th meeting between the two sides in all competitions.

Arsenal have won 73 of the previous 188 games, Chelsea have come out on top in 61, while there have been 54 draws.

The match at Stamford Bridge will see the Premier League’s two top scorers in action.

Both Alexis Sanchez and Diego Costa have 15 Premier League goals this season. 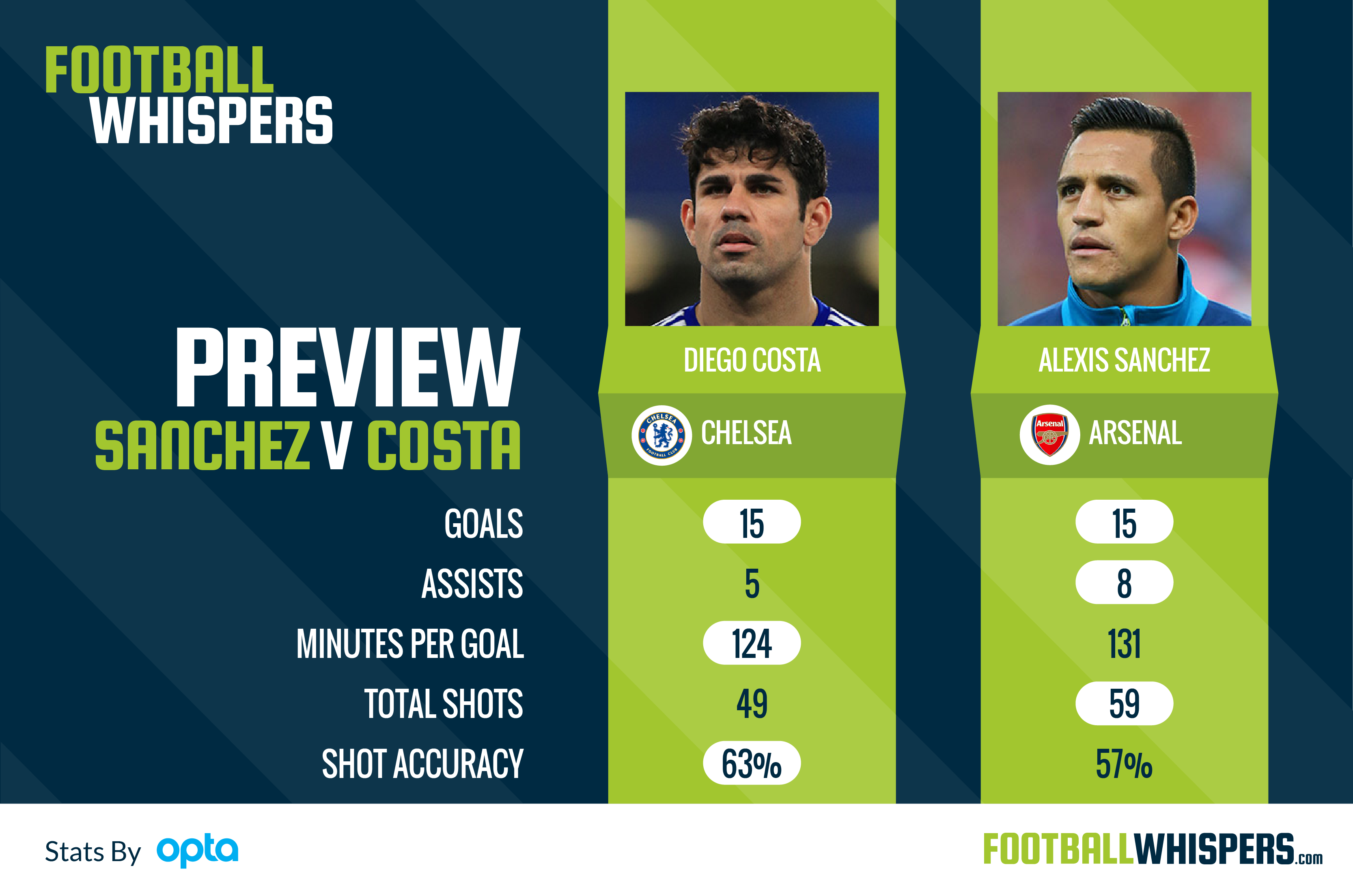 With the Spaniard playing fewer minutes than the Chilean, he has a better minutes per goal ratio – he has scored a league goal every 124 minutes this season, while Sanchez has scored every 131 minutes.

Sanchez has had more shots than Costa in the league this season – 59 to 49 – but the Chelsea man has had a higher percentage of shots on target than the Gunners striker – 63 per cent to 56 per cent.

They both have the same amount of goals from inside the box – 13 – with two from outside the box.

But Sanchez has scored two headers to Costa’s one. 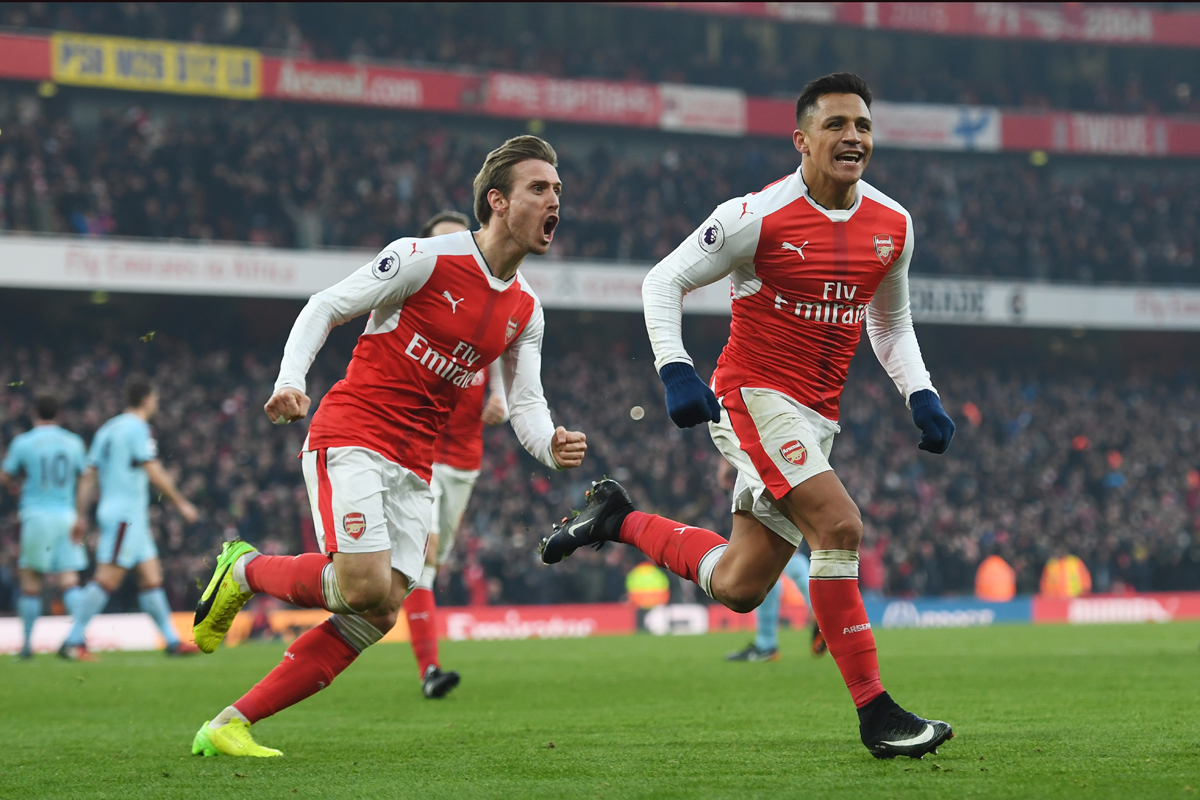 The match between the two sides in September was also Conte’s heaviest league defeat since October 2010 when he was Siena manager and his side lost 3-0 to Empoli.

In two of Diego Costa’s last four league games against Arsenal, he has scored in two matches and been booked in the other two.

The Gunners tend to create more chances than Chelsea – they’ve made 273 this season, compared to the Blues’ 248.

They have also scored more league goals than their opponents – 51 to 48, but the Blues have conceded fewer goals – just 16 compared to Arsenal’s 45.

Both teams have had the same pass accuracy this season – 84 per cent, with Chelsea’s passes being on average one metre longer than Arsenal’s – 19 metres compared to 18.

Danny Mills thinks the only way Arsenal can beat Chelsea is if they go with three up front.

He told Sky Sports News: “The [3-4-3] system works for [Chelsea] and they have an awful lot of strengths, but the weakness in any back three system is that area down the side of the back three.

“Gary Cahill is a fantastic defender, but [he is] not the most mobile anymore.

“That’s what Liverpool did in the first half – they caused them problems.

“It’s almost like you have to be very brave and over ambitious against Chelsea, and I think attack is your only option to try and beat them.” 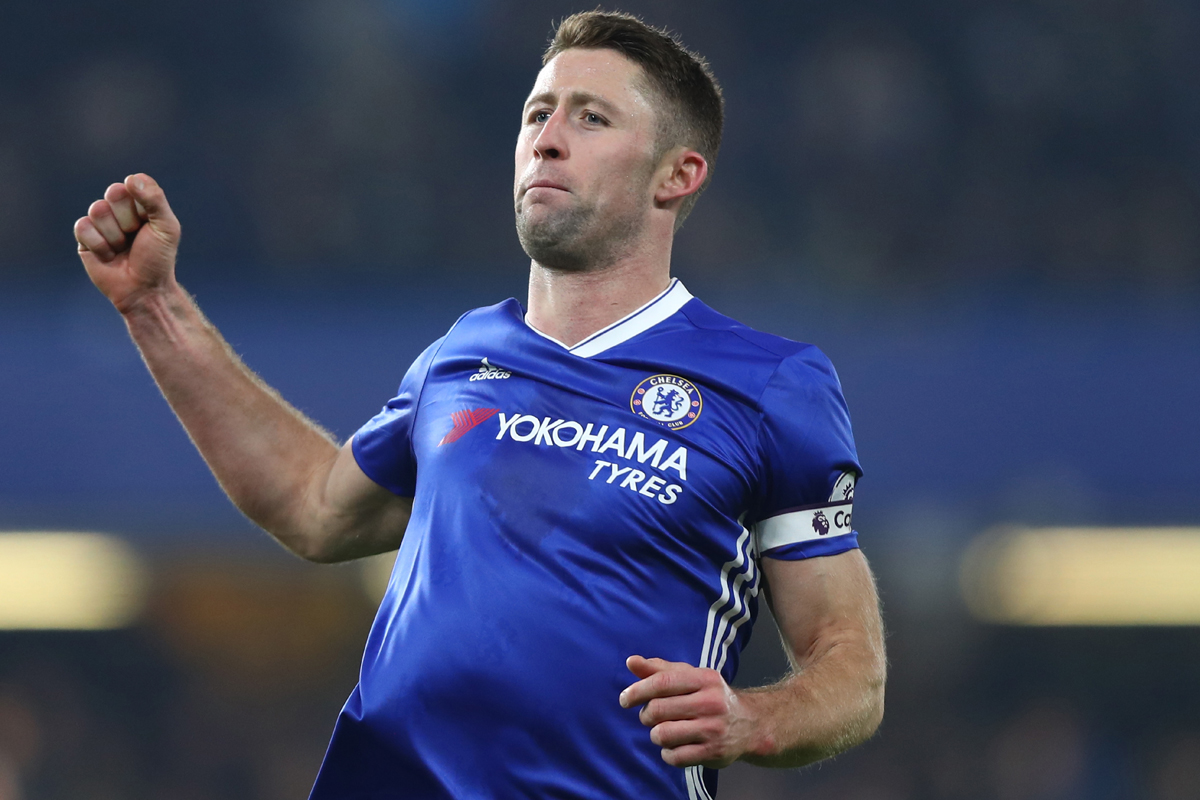 Chelsea are favourites with the bookies, and it’s hard to see Arsenal winning.

The Gunners have a poor record at Stamford Bridge in recent years, and the Blues have been unstoppable at home since switching to 3-4-3.

Arsenal used to struggle with Didier Drogba, who always seemed to get under their skin, and Costa seems to have taken over that role.

When he’s on form – and penalty miss against Liverpool aside, he is – he is unplayable.

The Gunners will look back on inflicting Chelsea’s biggest defeat earlier this season as a sign of hope, but that was a very different Chelsea side to the machine Conte has created.

If Chelsea win, it feels like that could be the end of the title race, with only the two Manchester clubs to face the Blues out of the current top six, but an Arsenal win could hand a glimmer of hope to the other contenders for the league.