Only six players in the Premier League have scored more goals than Tammy Abraham this season.

The Chelsea forward is enjoying his breakout campaign for the Blues, leading the line for Frank Lampard’s young side as the club’s No.9. He’s scored 13 times in the English top-flight and his form seen him force his way into Gareth Southgate’s England squad.

Despite this, the team currently occupying fourth spot in the Premier League are on the lookout for attacking reinforcements. Throughout the January window, strikers kept being linked with a move to Stamford Bridge. Moves failed to materialise but the fact Moussa Dembélé, Edinson Cavani and Luka Jović were seemingly on Chelsea’s radar suggests a centre-forward tops their transfer wishlist.

Abraham recently revealed he would’ve liked Cavani to join him: “The players we were talking about coming, like Cavani and other top-class strikers, have been around in the game for many years. It would have been nice if he had come.

“He would have been someone I could have learned from and stolen his ideas to add to my own. It didn't happen though and for me it gives me that extra push and desire to claim my position and be as best as I can.

“Playing for a club like Chelsea there is always going to be pressure. For me, it is about being in the right place at the right time and believing in myself and my abilities as well. I am sure I will score a few more. I like the pressure and I play under pressure.”

On the surface, a move for another senior striker, one which might see Abraham benched, seems harsh given his performances this season.

But the Chelsea No.9 has netted just once in 2020 and the Blues have picked up maximum points on just one occasion since the turn of the year. They now hold a slender four-point lead over Tottenham Hotspur; their grasp on a top-four place isn’t quite as firm as it once was.

Lampard’s men are still scoring, they’ve scored four goals in their last two outings, but this return has resulted in winning just two points. Abraham's inexperience is showing and it could be costly.

While his record of 0.61 goals per 90 is impressive, his post-shot expected goals average tells a different story. The metric looks at where the shot was taken from and where it lands on target. You’re then able to see which players add value to their shots and which don’t.

Abraham’s post-shot expected goals per 90 average is 0.45. Significantly down on his actual goal return. It shows he is overperforming, as all elite forwards tend to do, but his finishing needs to be worked on. The difference between those two figures is six goals over a 38-game season.

His finishing is a concern but it's the chances he is passing up that should worry Chelsea fans. Match of the Day highlighted it on Saturday and it is hard to overlook. 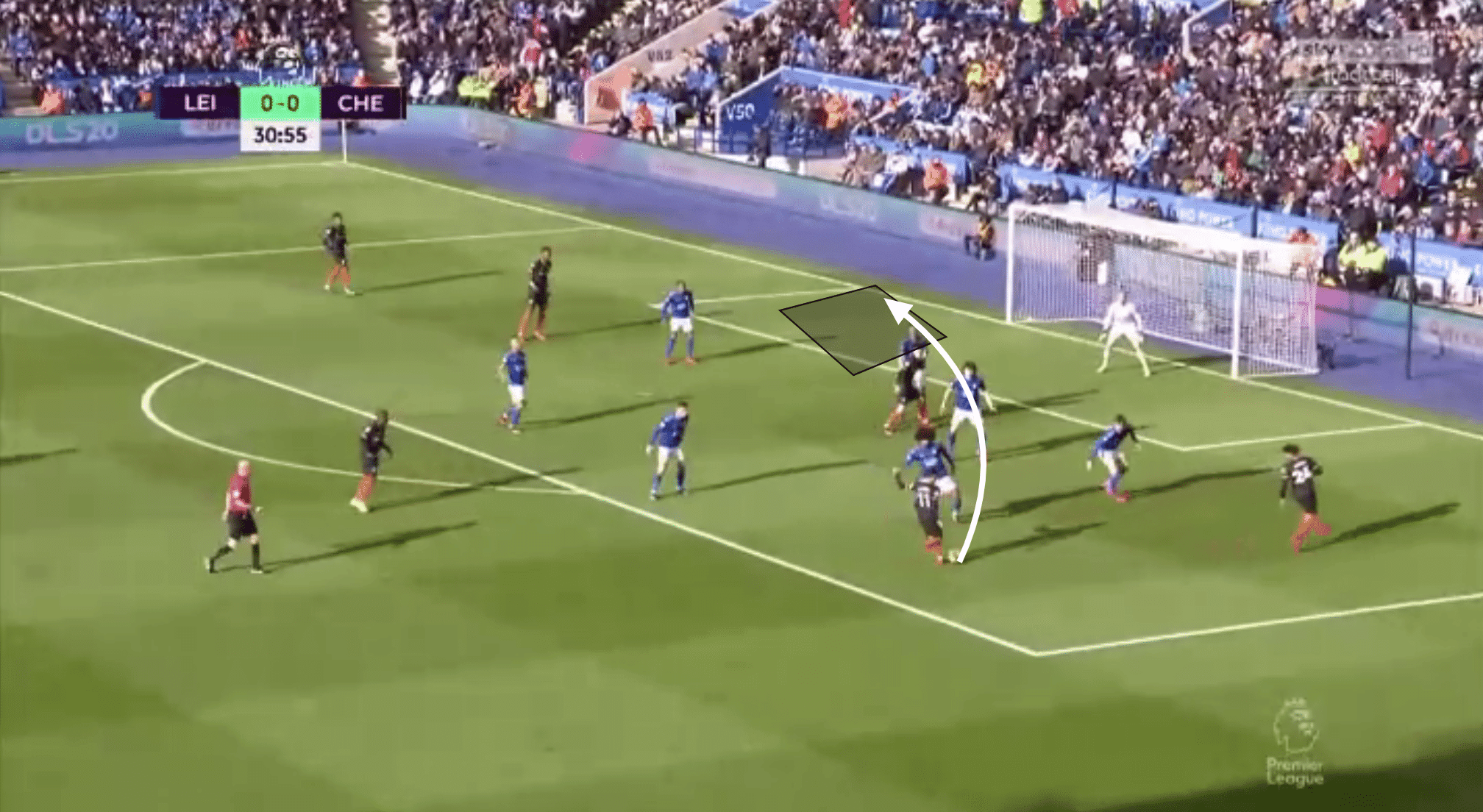 At first glance, it appears as though Abraham has taken up a good position in the image above. He's peeled away to the back post and has height on his side in an aerial battle against Ricardo Pereira. But his positioning makes it virtually impossible for Pedro to pick him out.

Chelsea's No.11 can't float the ball on top of the Leicester right-back because Hamza Choudhury is in the way. The only real target area he can hit is highlighted with a black box. But even if the former Barcelona man gets a cross into that area, the Chelsea forward is too far away to properly react. He doesn't need that much of a running jump on a 5ft 7in full-back.

A potentially dangerous chance results in Pedro attempting an outrageous but fairly straightforward chip. If Abraham was a few yards closer to Pereira, the opportunity may have favoured Chelsea a lot more.

This wasn't the only instance in the match that saw the Chelsea No.9 devalue a potential chance with his positioning and movement. 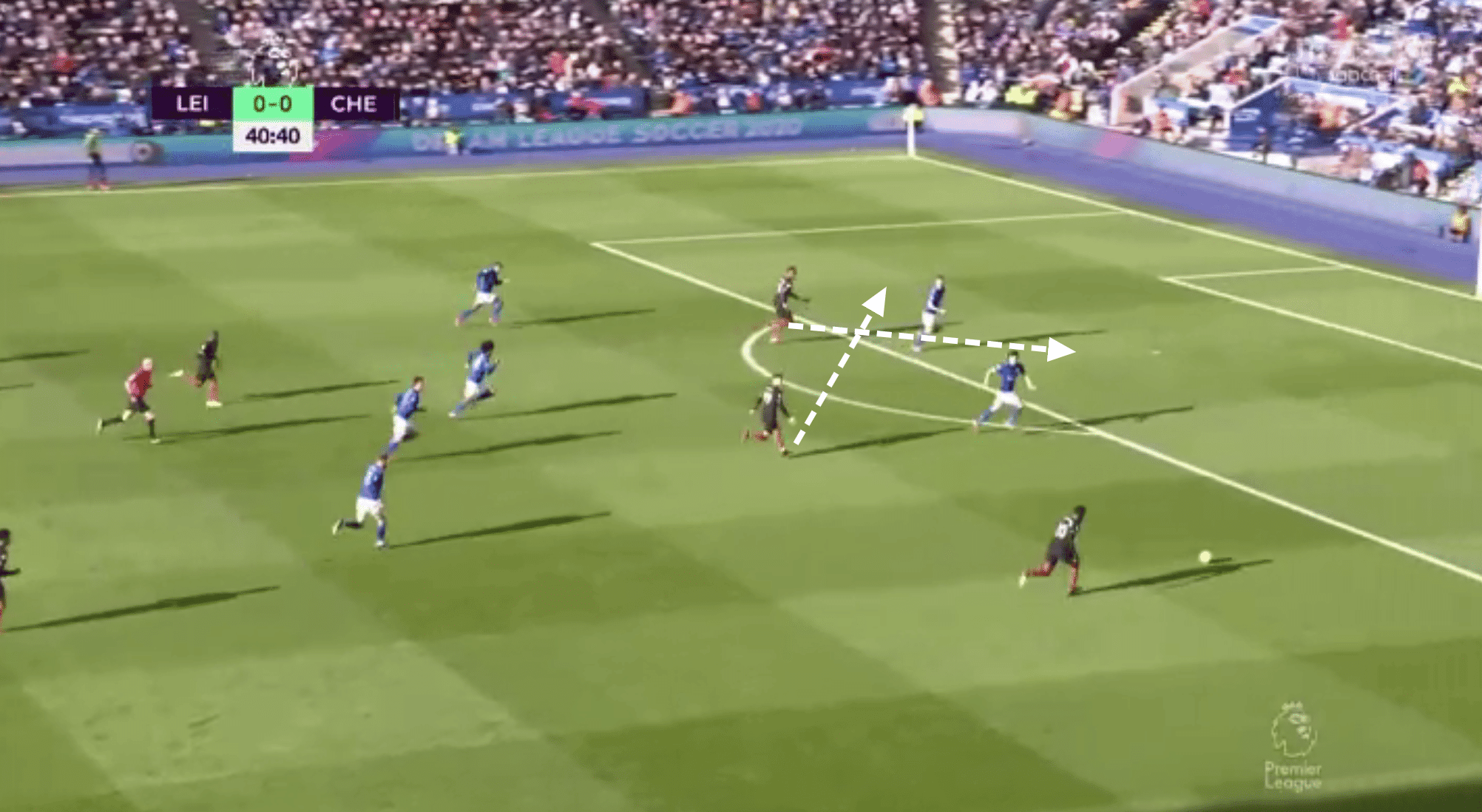 In the still above, Chelsea have just regained the ball after Mason Mount pressed Leicester into a mistake. With Callum Hudson-Odoi racing to collect the ball, Abraham should dart in front of Jonny Evans.

That would have meant the Blues No.20 only had to miss out Çağlar Söyüncü with a pass into the area to find a team-mate. Mount could then attack the space at the back post created by Abraham drifting into a central area as a backup option. 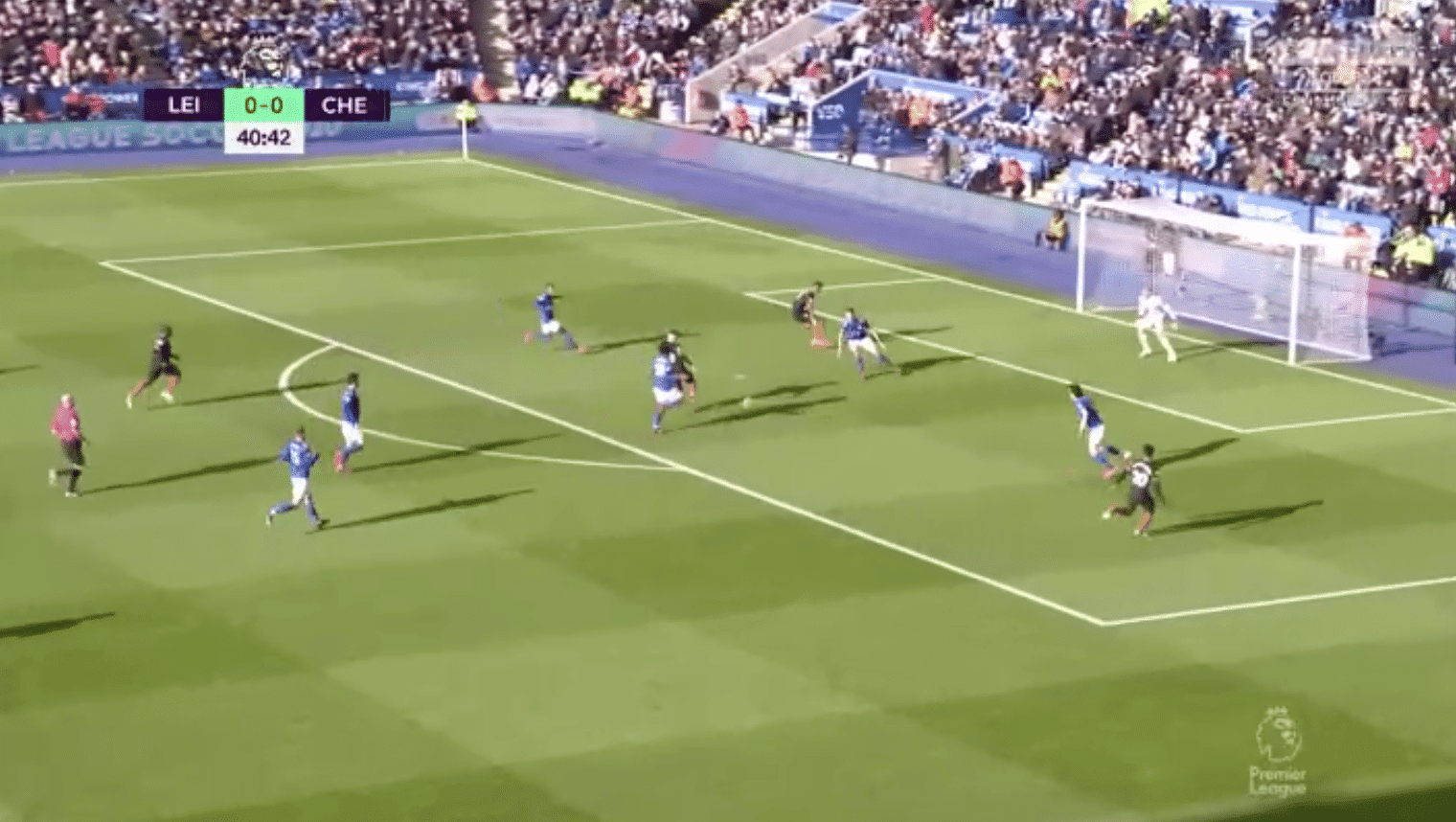 Instead, Abraham continues his run towards the back post and Hudson-Odoi is forced to pick out Mount with a pass. The Chelsea midfielder can't hit it first time, or bring it under his control properly, and Leicester are able to smother him and the potential chance. By the time Mount shoots, the Foxes have two men on the line, a goalkeeper, two defenders and Abraham in front of the youngster.

Chelsea needed two set pieces to find a way back at Leicester on Saturday despite creating decent openings in open-play. Abraham's limitations are starting to show and it could cost the Blues a place in the Champions League next season. They should stick with him as he will likely improve with experience. But they could've done with a short-term boost during the January window.