Certain numbers in football come with a lot of baggage.

For Liverpool and Manchester United, the number seven, associated with the likes of Kenny Dalglish and Eric Cantona, can be something of a poisoned chalice. The weight of expectation can crush players before they’ve even kicked a ball.

For Chelsea, that number happens to be the number nine. However, the mystique surrounding it is for all of the wrong reasons.

Not since Jimmy Floyd Hasselbaink have the Blues had a player who thrived wearing the No.9. Radamel Falcao, Franco Di Santo, Mateja Kežman, Gonzalo Higuaín and Álvaro Morata have all tried and failed to build on the foundations laid by Hasselbaink as Chelsea’s leading striker.

It was viewed as a cursed number, and there comes a point when it moves away from being a joke and becomes something of a reality.

But streaks are there to be broken and Tammy Abraham has done just that this season. Handed the No.9 shirt ahead of the current campaign, the 22-year-old was trusted by new manager Frank Lampard to be his main man in attack.

The club's transfer ban inevitably helped Abraham’s cause but football sometimes creates opportunities and players have to grasp them with both hands. Exactly what the former Aston Villa loanee has done.

Currently the joint-top goalscorer in the Premier League with eight goals, Abraham has helped fire Chelsea to fourth, just two points behind second-placed Manchester City. It’s been a remarkable start for both striker and manager.

This is why the reports linking the Blues with a big-money January move for a striker seem somewhat bizarre. Callum Wilson is on the radar once again along with RB Leipzig’s man-in-demand, Timo Werner.

The latter has been linked with Bayern Munich, Real Madrid, Manchester United and Liverpool in the past but, despite his goalscoring exploits this season, the hype surrounding him has died down a little.

The 23-year-old has six goals in just over 600 Bundesliga minutes and he’s chipped in with two in three Champions League matches.

Wilson has started the season in fine form, too, and has already scored five in the Premier League. The 27-year-old is well on his way to eclipsing the 14 he struck last season – his highest return in the English top-flight ever.

Both Werner and Wilson are chance-getters and goalscorers. Both improve most top teams, though the ceiling of the former is much higher. But in Abraham, Chelsea already have a potentially world-class forward. In fact, on current form, the Blues’ No.9 is the best of the trio. 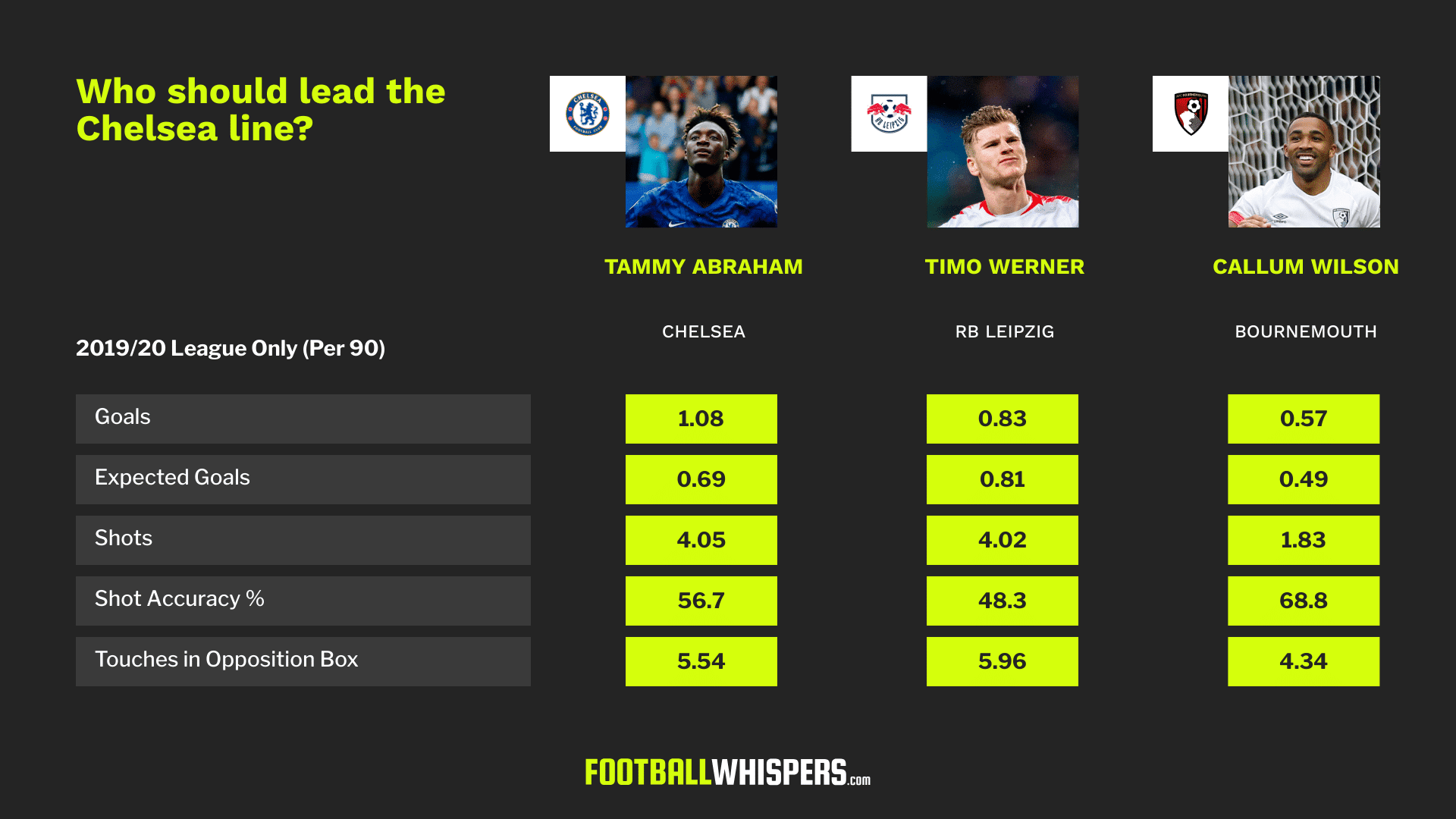 In terms of goals, Abraham leads the way with 1.08 per 90. This return will naturally slow down and then his expected goals average will come into play. The Chelsea No.9 is averaging an impressive 0.69 per 90 which shows a huge overperformance when it comes to actual goals. Furthermore, in terms of expected goals he's behind Werner (0.81) but comfortably ahead of Wilson (0.49).

Abraham's taking the most shots (4.05) and landing over 50 per cent of them on target. He doesn't lead the way for shot accuracy or touches in the box but overall his numbers are solid across the board.

Werner is an intriguing prospect, though. Once again he's on par with his expected goals. He's a fairly accurate marksman having landed close to 50 per cent of his 4.02 shots on target and he's used to seeing the ball in the box.

He'd be a shrewd addition to any attack given his versatility, he started life as a left-winger and often drifts out wide during games. But this could perhaps work against him if he moved to Stamford Bridge. Chelsea need someone to lead the line and be a focal point for their attack. That really isn't Werner's game and making him do that could well detract from what he's good at.

Furthermore, Callum Hudson-Odoi is tipped to claim the left-wing role and restricting him by signing Werner isn't going to be good for his development. Essentially, the Germany international's arrival would hinder two of the greatest talents at the club while costing Chelsea in excess of £50million if reports are accurate. It doesn't make playing or financial sense.

Likewise with Wilson. Given he's the leading forward for Bournemouth he isn't going to be cheap. He's playing in a two-man attack and seems to thrive in that environment. Chelsea don't play with a two and shifting a system to fit in one player isn't the most sensible of things, not unless that player is Lionel Messi.

The Blues have finally ended their No.9 hoodoo. Why fix something that isn't broke? There are plenty of other areas Chelsea could do with improving.