Sources close to the the Premier League leaders revealed exclusively to Football Whispers they have taken a keen interest in the versatile 18-year-old, with Antonio Conte looking to improve his current squad ahead of a campaign in the Champions League.

The Blues have been fortunate to be able to call upon the same back six for the majority of the campaign but beyond those players, their options are fairly limited.

Michail Antonio, Joao Cancelo, Jeremy Toljan and Mattia Di Sciglio have all been linked with summer moves to Stamford Bridge and defensive reinforcements are a certainty.

Conte was able to turn former Liverpool flop Victor Moses into a formidable right wing-back and we have been told the Italian feels he could mould the teenage Liverpudlian into one of the best in the world. 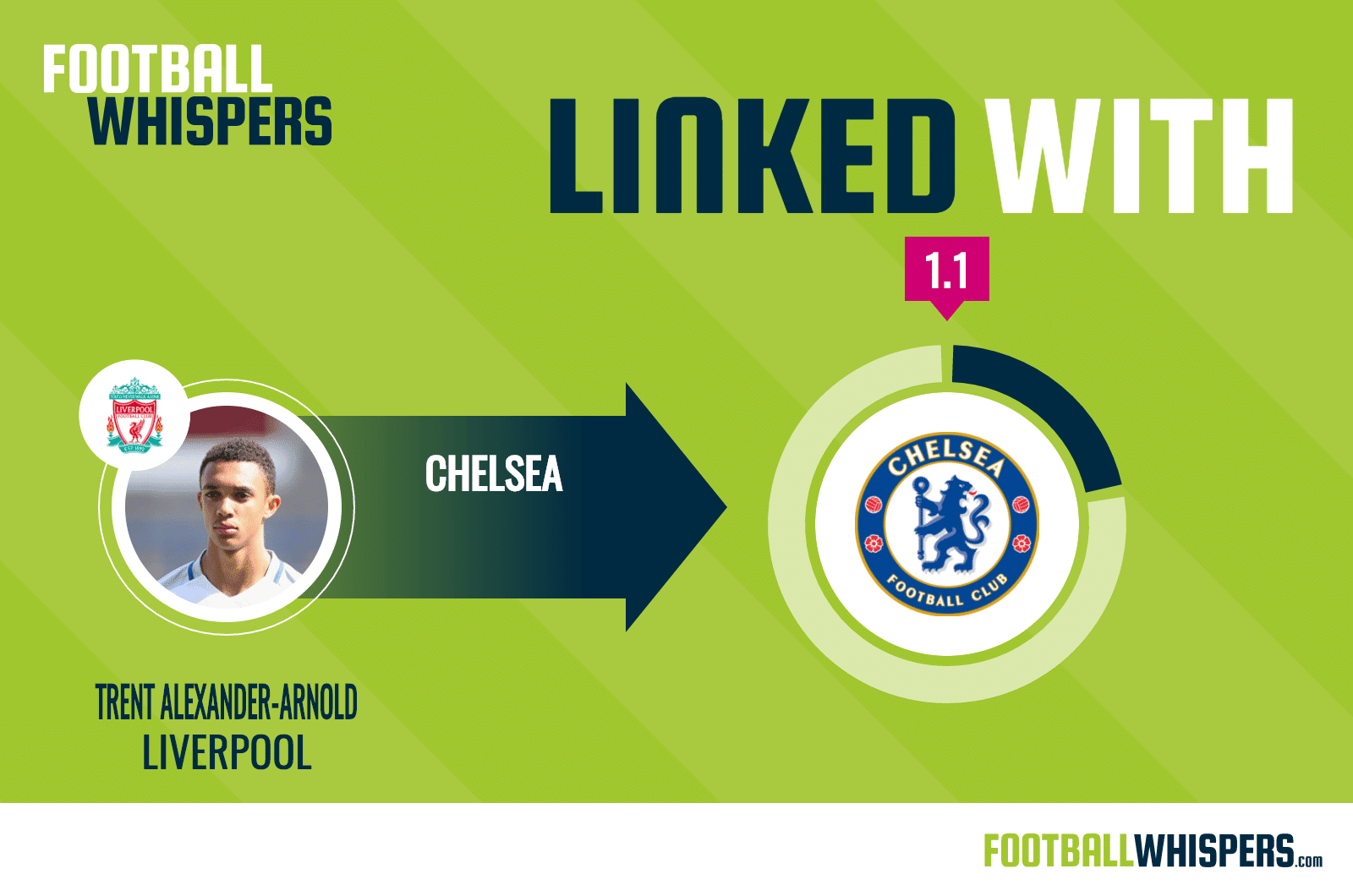 However, it is believed Alexander-Arnold is not keen on a move and wants to continue his development at Anfield.

Jürgen Klopp recently praised the youngster, saying: “Trent is a wonderful player. We are really happy to have him here.”

was born to be a footballer.

“He has something extra, a certain insight and creativity that makes him able to play unpredictable passes,” he said.

“He is quick in mind, knows what's going to happen and has the capacity to improvise – this opens up situations for himself or for others.

“Our playing idea is to create chance after chance, from each position taking this initiative. A right defender who can create and can dominate the complete right channel. In my opinion, he is one of the most all-round talents in Europe with a ‘team first’ attitude.

“When he was my captain at under-16 level, he was able to control rhythm and make the team play like no-one else. Some people are born to become a football player; he is definitely one of them.”

Liverpool, who sit in third position and trail Chelsea by 12 points, clearly have high hopes for Alexander-Arnold and hope he'll become part of the furniture over the next decade.

However, the more he impresses, the more his stock rises and the more admiring glances he'll get. There's not an abundance of high quality English players and those that fall into that category are courted by Champions League regulars.

Sterling Stats: No City player has assisted more goals than Raheem Sterling (14) in all competitions. 9 goals to go with that. pic.twitter.com/GDSkrg53M2

READ MORE: WHY JORDI ALBA IS THE UPGRADE CHELSEA MUST MAKE

The Reds may want to keep their best players but every player has a price and if they aren't playing in Europe's elite competition there will always be a risk of these individuals leaving.

The youngster is a forward-thinking manager's dream. He has the raw tools to be a top class footballer in a variety of positions. He started life as a striker before Lijnders used him in the No.6 role in a diamond. He's played at right-back for the first-team as well as part of an attacking trio.

For Chelsea it's more than likely he'd turn out as a wing-back. Chelsea use Marcos Alonso and Moses as the players to primarily offer the width. However, they don't just hug the touchline and are encouraged to make their way into the penalty area to support the attack – the wing-back pairing have a combined eight goals and four assists this season.

Any wing-back signing for Chelsea will have to have an attacking output. 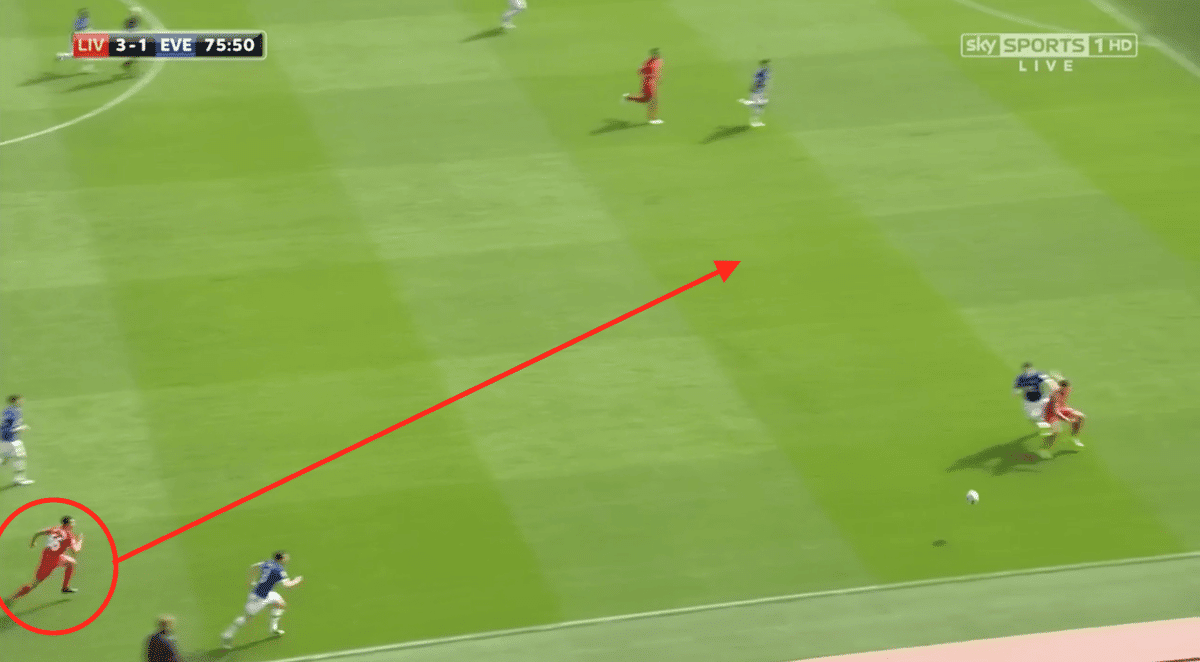 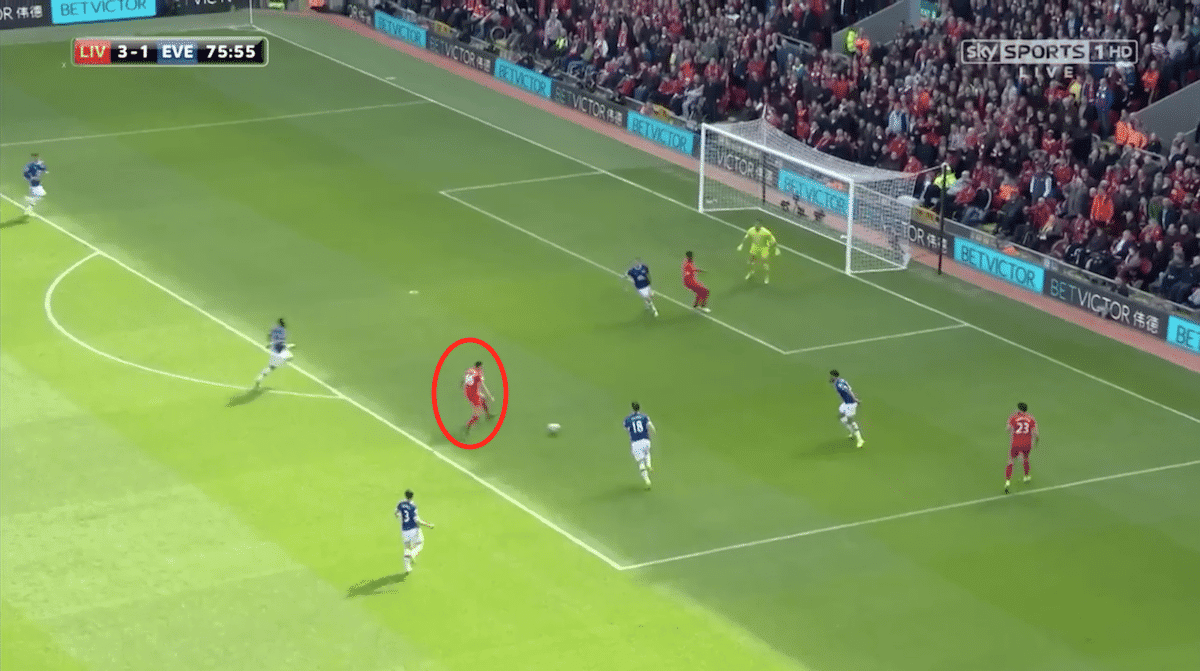 As you can see in the two pictures above, Alexander-Arnold has those attacking instincts. In the initial picture he's circled breaking into the Everton half having played a pass to Emre Can.

He doesn't hesitate and he's not reluctant to attack the space in central areas. He takes up a good position in the penalty area to receive the return ball from Can before testing Everton ‘keeper Joel Robles with a good effort. 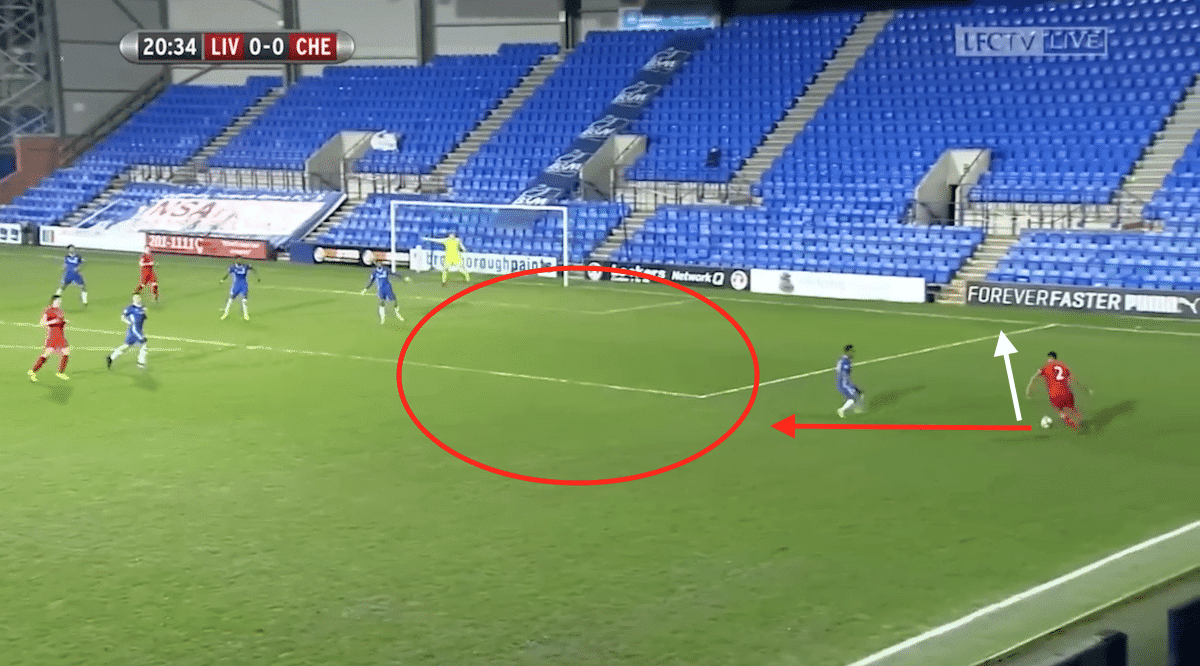 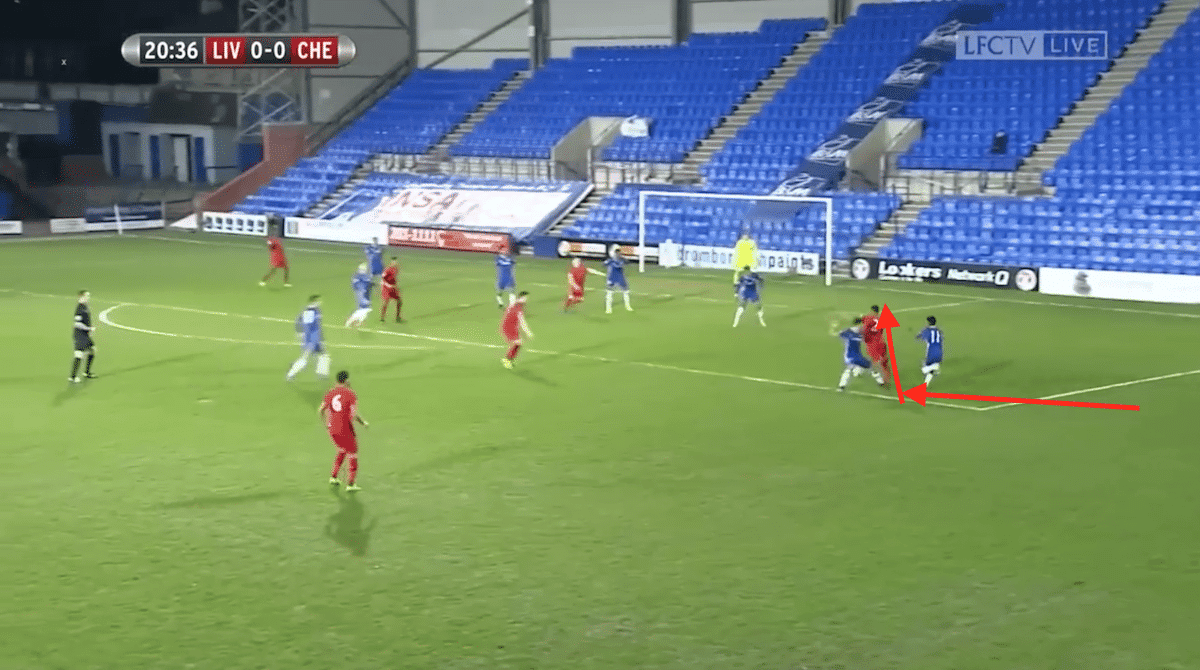 This time it's his intelligence on display. He picks the ball up in a wide area against Chelsea's Under-23s. He could attack the defender on the outside, shown by the white arrow, and look to cross the ball into the penalty but in doing so he'd be minimising the space he can work with.

Instead he cuts inside and attacks the acres of space in the Chelsea penalty area, red arrow, and his quick enables him to slalom past two players before being caught for a penalty. 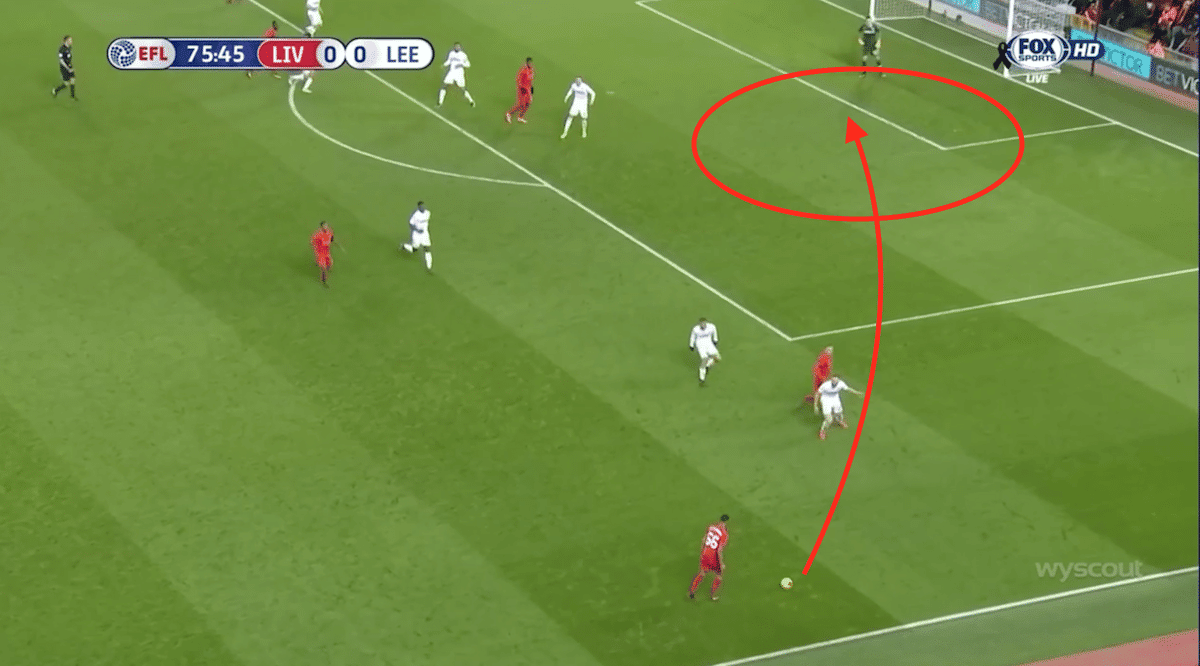 Lijnders once said Alexander-Arnold was his very own Ruben Neves. For such a statement to be true the Liverpool player must have ability on the ball and an eye for a pass. He does.

In the picture above, this time from the EFL Cup match with Leeds United, you see him grab an assist. He could attack the space on the outside and then look to get the ball into the area or he could dribble infield in an attempt to lure the away side out.

Instead he puts an early ball into the box in an area which is near impossible to defend. Divock Origi is on hand to poke the ball home. It just goes to show how much of a nightmare it is to defend against him. Give him space and he's got the ability to put dangerous balls into the area. Get tight and he's more than comfortable taking his opponent on.

Fortunately for Liverpool fans it looks as though they will have the pleasure of watching Alexander-Arnold maraud down their right flank for the foreseeable future.

He has a contract with the Anfield club until 2021 having signed a new deal in July 2016. If he continues to impress he'll be in-line for another extension as the Reds make moves to tie their integral players down.