There are often a number of ways to approach any given transfer rumour. Some are simply ludicrous, some are perfectly plausible, but almost all of them are a blend of reality and speculation, with a little bit of drama sprinkled on top.

The recent reports surrounding Aleksandr Golovin are perhaps a perfect example of that. Some reports in England state the Russian is a Chelsea transfer target and the Blues are leading the way in signing the 22-year-old.

Others in Italy claim the London club have only moved in to prime position after Juventus decided he wasn’t worth the money his club, CSKA Moscow, were asking for. He has also been subject of Manchester United transfer rumours.

So which is it? Is Golovin a new star for Chelsea fans to get excited about, or is he a player Juventus deemed good but not good enough to throw their summer transfer budget at?

The answer to that question could prove to be exceptionally important for the Stamford Bridge side in the season ahead.

It’s quite telling that before the World Cup Golovin was linked with Newcastle and Southampton. And after just three games he’s suddenly good enough for the Premier League top four.

That’s not to say that either of those clubs aren’t of a certain standard, but Chelsea aren’t going to reach the heights they need to return to if they’re signing players that are perhaps better suited to mid-table or even relegation-threatened clubs.

Indeed, eagle-eyed Chelsea fans may have noted the stories circulating around the Russian international and noted that their club have been here before.

Last season the West Londoners signed Danny Drinkwater and Ross Barkley for sizeable sums and although both players are proven Premier League players and decent enough, neither are really capable of helping Chelsea take the necessary steps back up the league table.

And a quick look at Antonio Conte’s side from last season suggests there are plenty of these mid-range, so-so midfielders at the club.

Cesc Fàbregas, Ruben Loftus-Cheek, Tiémoué Bakayoko and the aforementioned duo are either too young, too old or simply not good enough. Aside from N'Golo Kanté there isn’t a single central midfielder at the Bridge that would walk in to Manchester City, Liverpool or Tottenham’s starting XI. 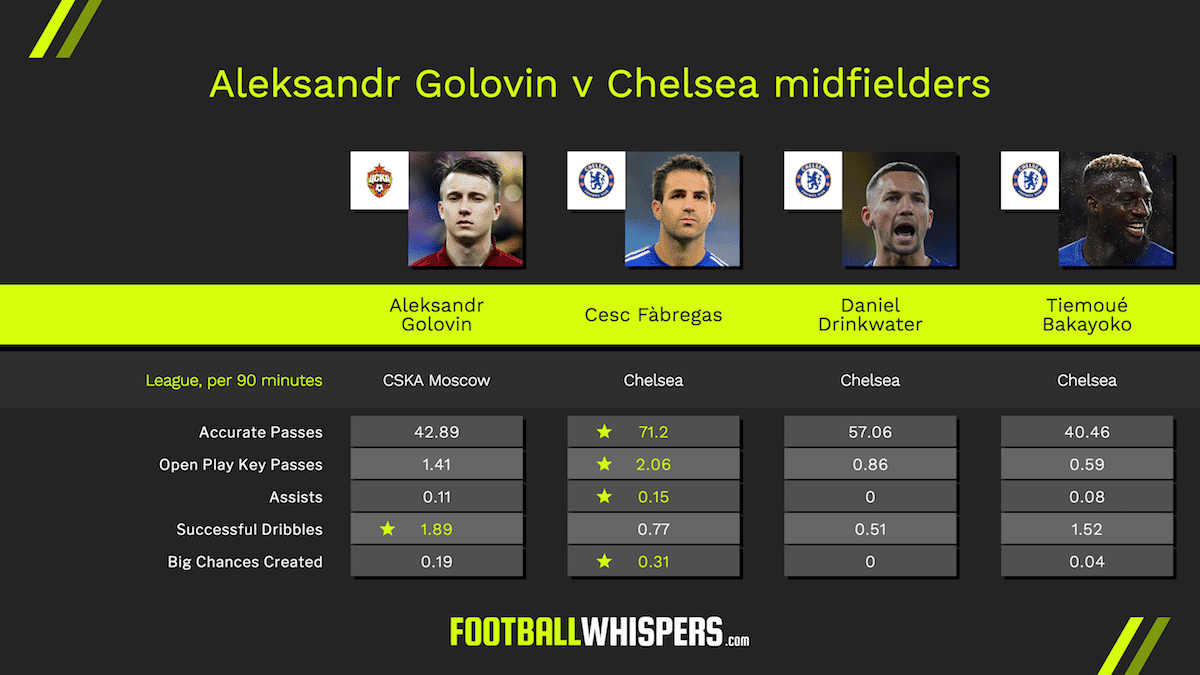 When we take a look at Golovin’s stats they don’t suggest a player that would arrive at Chelsea and immediately galvanise a squad which put up a pathetic defence of their title win a year prior to finish fifth.

The 22-year old is primarily a playmaker, yet his open play key passes per 90 for CSKA last season stood at just 1.41, while his assists totalled 0.11 per 90. That’s worse than Fàbregas’ at Chelsea last season and the Spaniard was playing in a much tougher league compared to Golovin, whose team finished second in the Russian top flight.

The midfielder is also famed for his goal-scoring ability but that also comes across as slightly underwhelming with just seven goals in 43 games for CSKA last season; Golovin’s average was 0.19 goals per 90. To put that in to context it’s only marginally better than Drinkwater’s 0.17 for Chelsea last season.

At just 22 there’s no doubt that Golovin could become a great player for Chelsea in the Premier League and Champions League but young, promising players have to be exactly that – promising – before they then become great.

While Golovin has had a decent season in Moscow there’s very little to suggest that he’s been ripping up trees in Russia and is ready for a bigger, tougher test.

For Chelsea, who seem to be stuck in a managerial and transfer twilight zone at the moment, a quick look across the league at their nearest rivals may offer a better tactic for identifying talent.

In midfield, Manchester City have Fernandinho and Kevin De Bruyne, Manchester United have Paul Pogba, Tottenham have Dele Alli and Christian Eriksen, and Liverpool have Fabinho and Naby Keïta joining.

Each club has prioritised world-class players in their midfield, yet Chelsea seem content with half measures and players with possible potential. Until they change that policy they will struggle to get back into the top four on a regular basis.