So let's get the staple sentences that are in almost every article about a Chelsea youth player out the way.

No, the Blues haven't had an English player come through their Academy and break into the first-team since John Terry. Yes, there have been a number of false dawns; Josh McEachran, Nathaniel Chalobah and probably Ruben Loftus-Cheek. And yes, the club do have a surprisingly large number of players out on loan.

Right. That's done. Nice to have ticked them off early, right?

What is clear from the above is that it can be very easy to bash Chelsea for how they handle young players. The Blues haven't had – and still don't – clear pathways in place to the first-team. Of that there can be no debate.

But the club deserve to be lauded for the quality footballers they are producing on a yearly basis. Chelsea haven't won the past five FA Youth Cups, the last of which was by a 7-1 aggregate score against Arsenal, by accident. They've done so because of excellent coaching at various youth levels.

The best example of this is Callum Hudson-Odoi, the talented winger who has been with the Blues since he was just seven years old. Clearly he had potential as a young boy yet it needed developing. And that is what Chelsea have done over the last decade.

He was the standout in that FA Youth Cup final win against Arsenal, scoring twice and assisting another in the 4-0 second leg victory at the Emirates Stadium. And now at the age of 17 years old ‘CHO' is a member of the first-team squad.

Hudson-Odoi is arguably the club's brightest prospect, all pace, skill and plenty of end product. Yet he has only featured in one competitive game so far under Maurizio Sarri, and that was as a 60th-minute substitute with the Europa League clash against BATE Borisov already won.

His lack of game time isn't entirely surprising despite his impressive performances in pre-season. The Premier League is a very different world to the laissez-faire friendlies played in the summer.

What is, though, is that the winger has been included in a match-day squad just twice this term – the League Cup victory over Liverpool in September and the win over BATE. 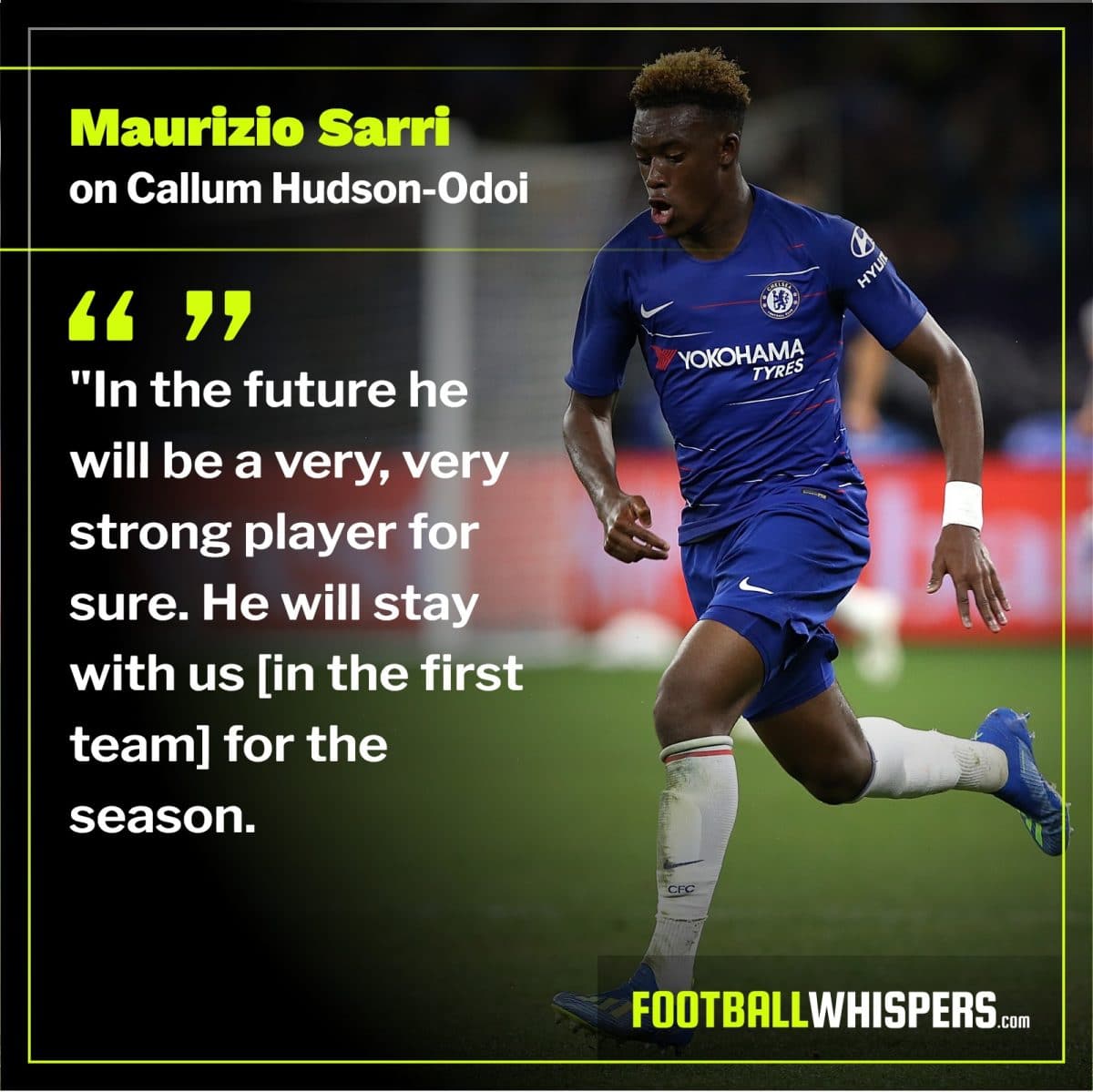 Sarri has said all the right things about Hudson-Odoi but he hasn't yet backed them up with his actions. Neither did Antonio Conte before him. And given the circumstances of the teenager's contract, that is a problem.

In the summer of 2020 Hudson-Odoi will be able to walk away from Chelsea. The Blues are, according to numerous reports, in talks to extend his deal before it enters its final 12 months.

Yet the youngster isn't committing to the club because he is unsure about the opportunities he will be given in the first-team. It's a valid concern and one Chelsea must assuage in the coming weeks and months.

For years there was a commonly held belief that young English players were not as good as their European contemporaries. And, in truth, there may have been something in that.

Times have drastically changed, however, and now young English players are in demand like never before.

Success at youth level, such as England's Under-17s winning the World Cup, has played its part. But it's the likes of Jadon Sancho at Borussia Dortmund, Ademola Lookman during his loan spell at RB Leipzig and Reiss Nelson at Hoffenheim that have proven there are platforms out there to star. They simply have to be found.

Clubs in Europe are ready to take advantage of Chelsea's – and other Premier League clubs' – failings. There are reports Borussia Dortmund are lining up moves for Hudson-Odoi in addition to Manchester City's Phil Foden and Liverpool's Bobby Duncan.

Foden and Duncan are tied down to long-term contracts and their clubs are unlikely to sell no matter the fee offered. Hudson-Odoi, though, holds all the cards when it comes to his future.

It's why Chelsea must handle him with great care. He can't be ignored or forgotten about. There has to be a clear plan in place, one that ensures he is given the platform to succeed that he deserves.

Think back to the Community Shield, a game which Hudson-Odoi started. He was Chelsea's biggest threat that day against Manchester City despite being up against arguably the best right-back in the Premier League in Kyle Walker.

That was an amuse-bouche for the player Hudson-Odoi could become. He is a star in the making. One that deserves a grand stage. If Chelsea don't want to give him one, another club will.