It would not be at all surprising, given Chelsea’s recent track record, if Maurizio Sarri were to leave for a new challenge this summer. The Italian coach has not yet been in the job for 12 months, but already there are suggestions of a rift between he and his superiors.

This season has not been easy for Chelsea. They started superbly having convinced the highly rated Sarri to leave Napoli for Stamford Bridge. In November, it seemed they might challenge Liverpool and Manchester City for the Premier League title.

Their form soon dropped off, though, and there was a struggle to find consistency. Fans grew frustrated with the ponderous football on display; they had been promised fluid, high-tempo attacking football, but instead got something more cautious, almost disjointed.

Sarri, too, often seemed unhappy. His demeanour on the touchline did not suggest he was relishing the task of forging a Chelsea team in his image. In his press conferences, he looked frustrated, irascible.

Then there were the heavy defeats: a 6-0 humiliation against eventual champions City and an almost equally embarrassing 4-0 defeat at Bournemouth. The dissenting voices grew louder.

Sarri, though, has been nothing if not persistent in his first season at Chelsea. He has been accused of dogmatism, condemned for not adapting to the challenges presented by the Premier League. But his players, over time, grew more accustomed to the demands of their new coach. 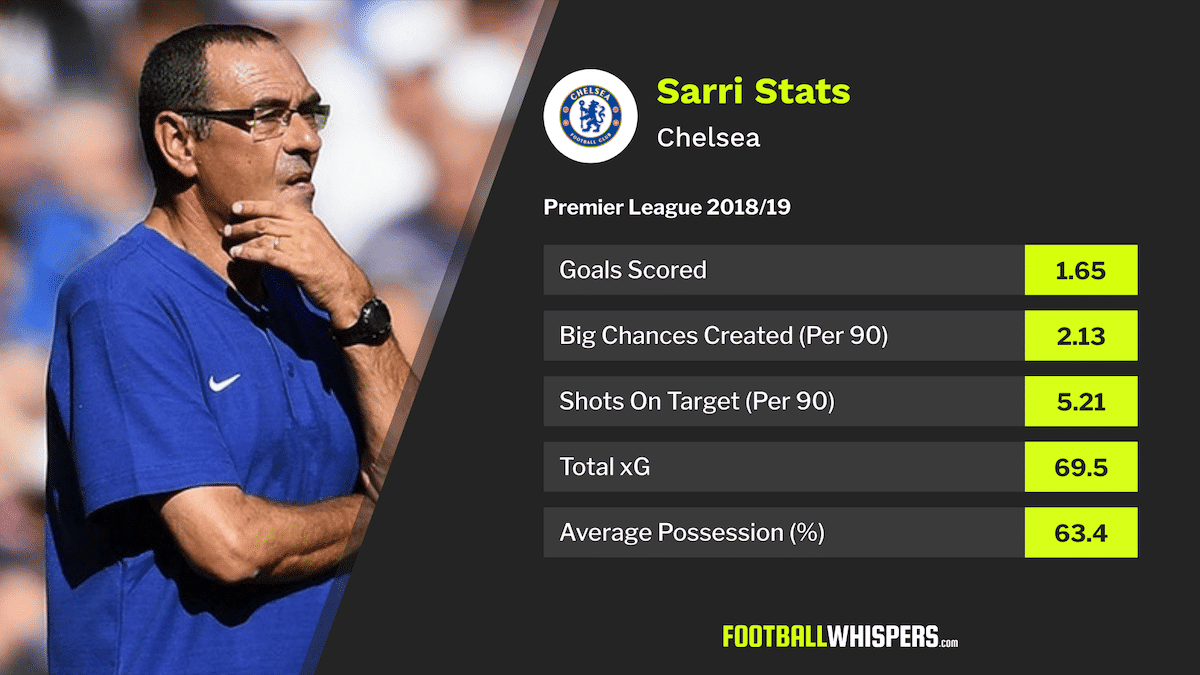 Finishing third and securing Champions League football next season was not an insignificant achievement, particularly when you consider Chelsea’s long run to the final of the Europa League.

Victory over Arsenal in Baku this week would add silverware to what has been a reasonably successful first season in England for Sarri. It must be remembered, too, that he was a penalty shootout away from winning the Carabao Cup back in February.

There is, then, a foundation to build on for next season should Chelsea opt to stick with the 60-year-old. But Sarri, understandably, might not feel welcome at Stamford Bridge. He has been linked with a move to Juventus, who are looking for a manager after the departure of Max Allegri, and the chance to join the Italian champions could prove tempting.

“I have two years of my contract here,” Sarri has said in the build-up to the Europa League final. “I have no contract with other clubs. I have to speak with my club after the final. I want to know if they are happy with me.”

Sarri has been asked, too, whether his future at Chelsea depends on the result of the upcoming meeting with Arsenal, a suggestion which he categorically dismissed: “If the situation is like that I want to go immediately because you cannot after 10 months of work have to play everything in 90 minutes. You are either happy with my work or not happy.”

It remains to be seen whether or not Chelsea are truly happy with him. He has split opinion amongst supporters, who have not warmed to him like they did Antonio Conte.

Chelsea, though, have made progress this season, despite the transition to a very different style of play. They are two places and two points better off than in Conte’s final season and have reached two cup finals.

The stats suggest the Blues were one of the most efficient teams in this season’s Premier League: only City and Liverpool have a better xG per 90 than Chelsea’s 1.82, and it is a similar story with xG conceded per 90 (Chelsea’s 1.04 is bettered only by the top two).

Sarri has highlighted the need for time; time to implement his ideas, to close the significant gap between Chelsea and the division’s runaway leaders this season.

Sarri has also emphasised the lack of time at the training ground: “In Naples, I was able to have about 60 trainings only for the defensive line. Here I had about 11 or 12 on the defensive line, so there is a big difference.”

If Sarri is cast aside after just one season at Stamford Bridge, Chelsea will almost certainly be left wondering what might have been. The Premier League’s top coaches – Pep Guardiola, Jürgen Klopp and Mauricio Pochettino – all had periods of transition before making a mark at their respective clubs.

It would be premature to give up on Sarri now, particularly if the alternative is the comparatively inexperienced Frank Lampard. With a transfer ban on the horizon, the Italian’s know-how and tactical intelligence could be the key to navigating another challenging season.