Monaco have undoubtedly been the story of the season, both domestically and in the UEFA Champions League. No one expected them to win Europe’s elite competition, but a run to the semi-finals must be celebrated.

Arsenal transfer target Kylian Mbappé, Bernardo Silva, Thomas Lemar and Radamel Falcao have picked up most the plaudits, but over at left-back, Benjamin Mendy has been a difference maker. The runs and support from the 22-year-old have become almost as important to their success as the six attackers in front of him.

Although he only made an £11million move last summer, his superb displays have seen him linked with Manchester City and a rumoured summer target for champions-elect, Chelsea. 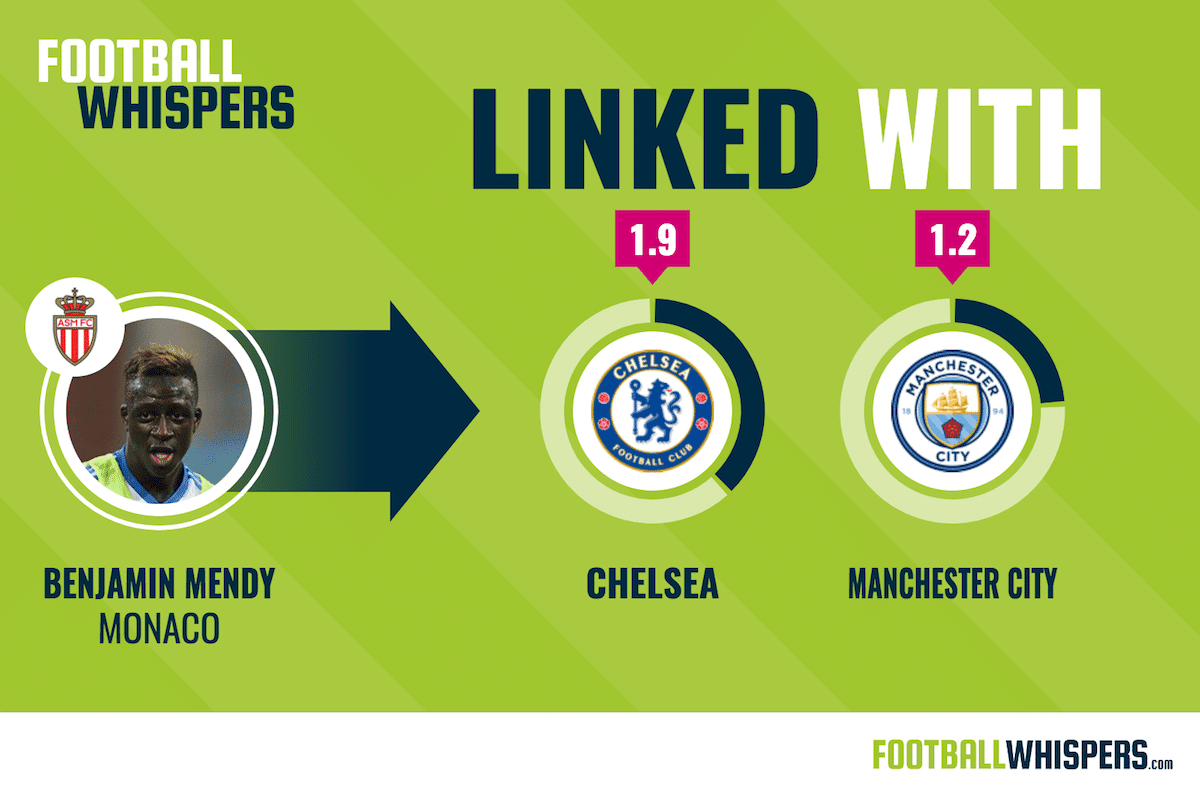 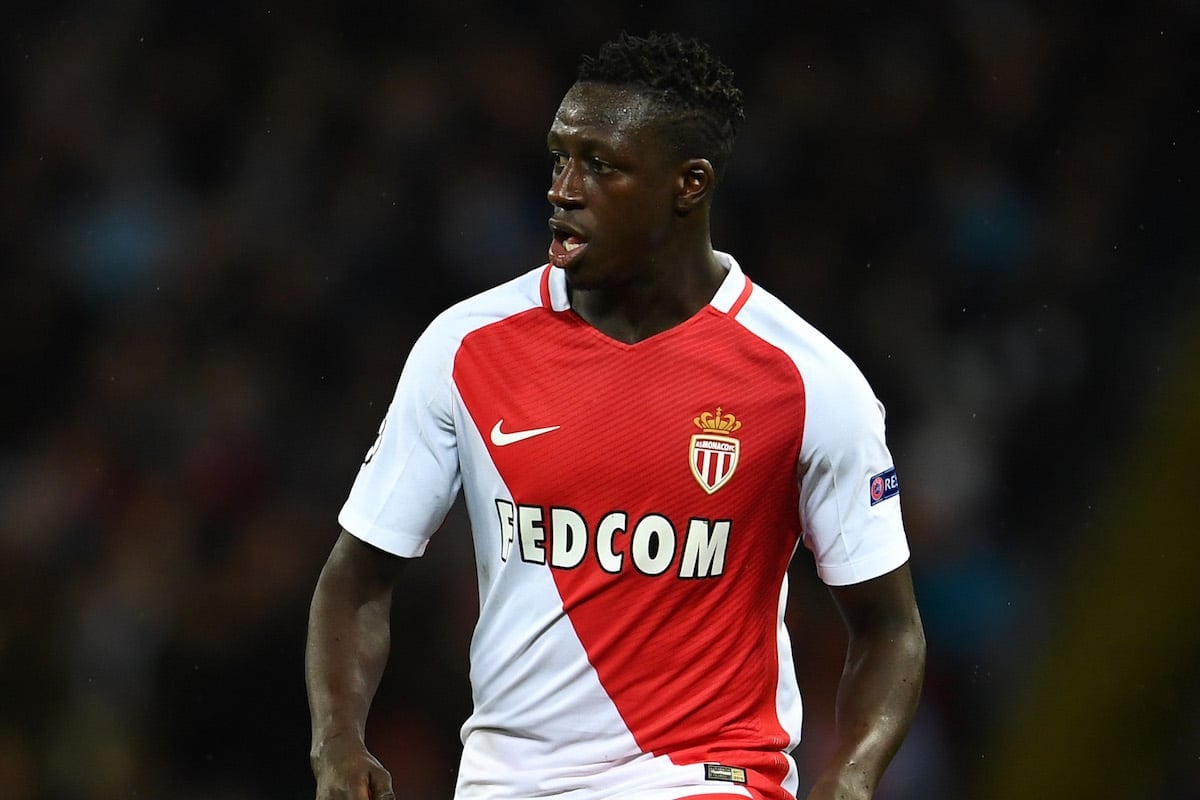 His importance to Monaco became more than apparent during their 2-0 defeat to Juventus at the Stade Louis II. Mendy was ruled out with a hip injury and in his place came the returning Djibril Sidibé.

Both have been criticised in terms of their defensive duties, but it’s what they bring in attack that has added real value. Against the soon to be Italian champions, Sidibé made two tackles and three clearances, but only added one key pass and two crosses, it was a disappointing display from the France international.

To contrast, playing against Dortmund, with 12 fewer touches, Mendy made one key pass and four crosses.

It was a similar story against Manchester City in the second leg, Mendy was immense. He won five tackles, made five interceptions and three clearances in defence, but made one key pass and seven crosses, picking up an assist in the 3-1 victory.

The understanding that the former Marseille left-back has built with Thomas Lemar has been crucial to how well Monaco have played and it has established him, not only as the best left-back in France, but one of the most impressive players in his position throughout Europe.

Only Alex Sandro of Juventus, Spurs Danny Rose, Real Madrid’s Marcelo and David Alaba at Bayern Munich provide more of a threat at both ends of the pitch than Mendy.

The 22-year-old has provided Guingamp’s impressive Brazilian, Fernando Marçal has seven, but in terms of overall play, Mendy trumps them all.

Add in another four in the Champions League and two in the Coupe de France and his attacking prowess becomes clear.

Pep Guardiola needs new full-backs. Gael Clichy isn’t going to take City to the next level and Mendy is everything that the Spanish coach would want.

A powerful runner, the France international will make sure he’s covering every blade of grass possible. His engine was perfectly captured in the Coupe de France win over Marseille this year.

With the game level in Extra-Time, Monaco won the ball in midfield and it was Mendy’s chance to pounce. 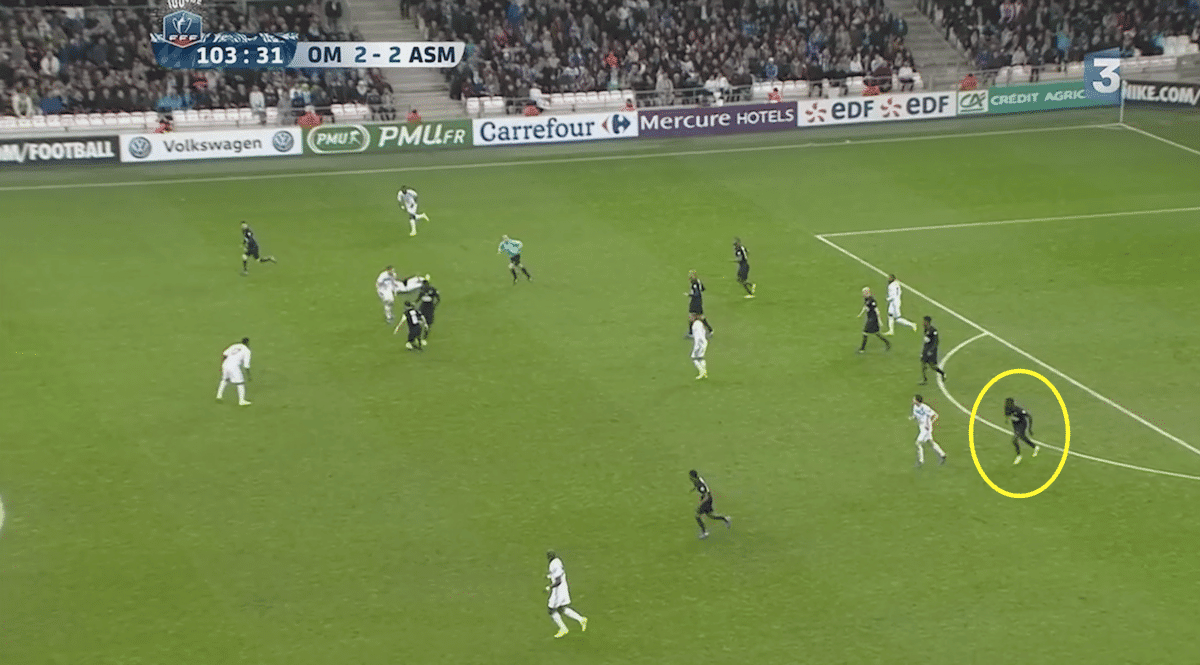 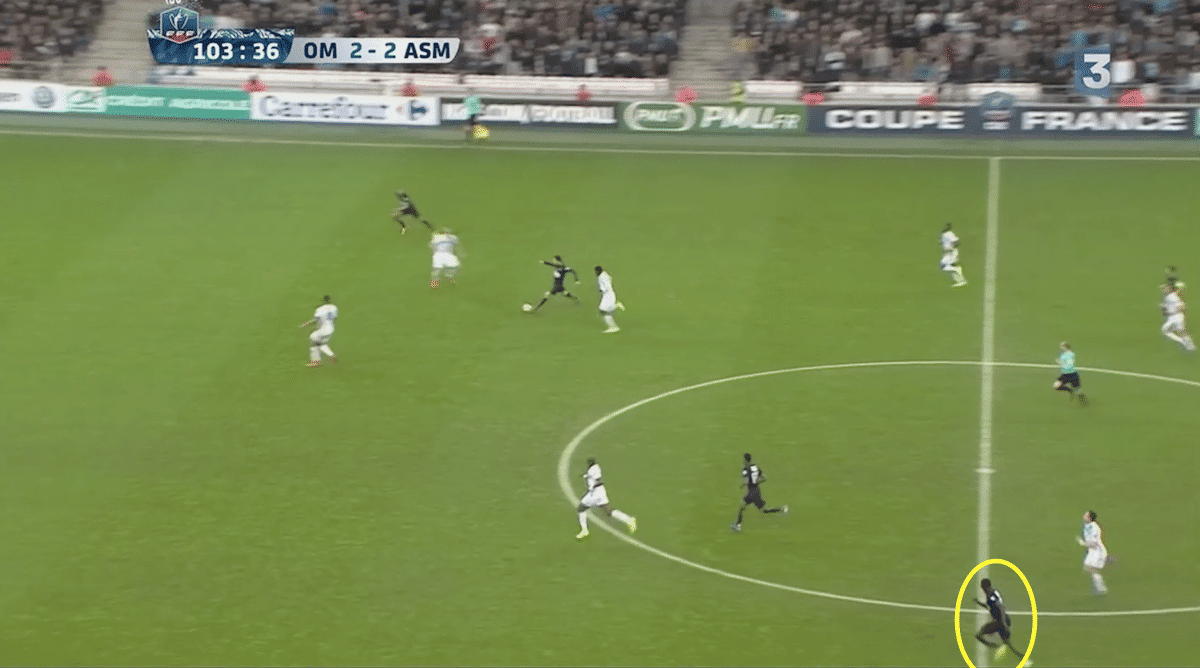 He’s on the edge of the box when they gain possession, but seconds later he’s on the half-way line, leaving players in his wake. 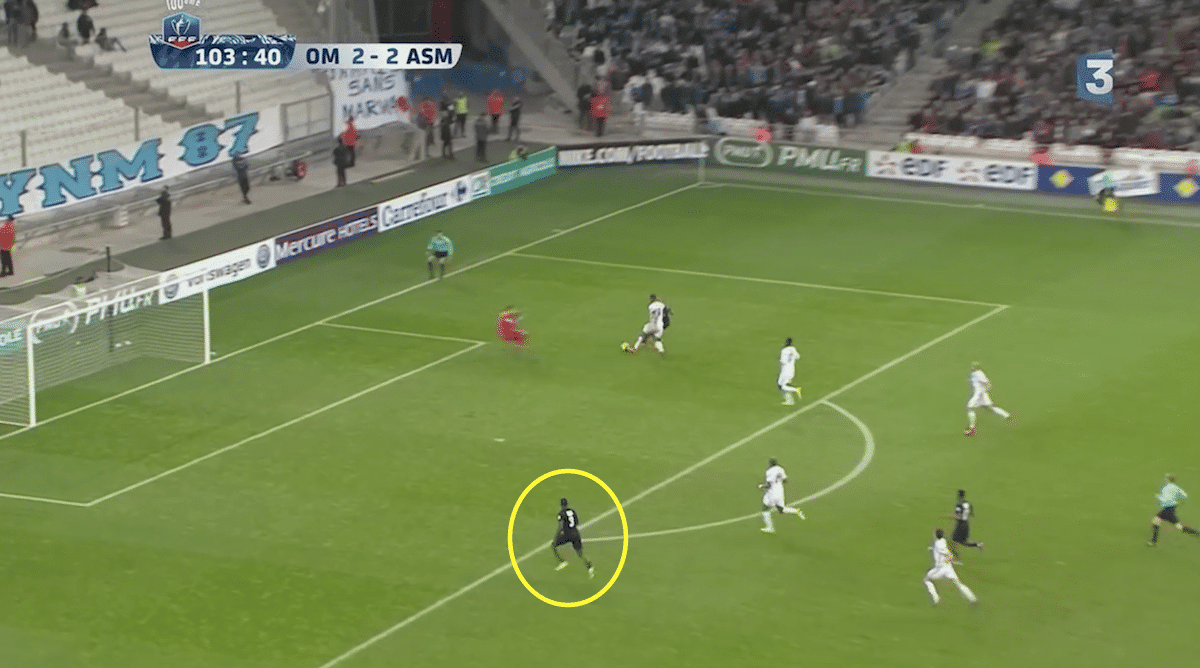 The effects of 103 minutes of football had no obvious effect on his stamina. Charing past OM’s entire team, he’s left free at the back post to tap in to put his side ahead.

Mendy’s season has been built on his relationship with Lemar on that flank. The former Caen midfielder loves to cut inside despite having a devastating left-foot, that opens the space for the defender to exploit.

The Monaco man wins more tackles than Gael Clichy, plus he blocks more crosses and beats more opponents off the dribble.

Although the current City man completes 26 more passes per 90 minutes, it’s Mendy that finds his team-mates with five times as many crosses. The Frenchman is a better defender, athlete and weapon in attack.

Felt they missed Mendy on the left; his crossing from open play is arguably the best in the world right now https://t.co/Ut39Q7R3Lu 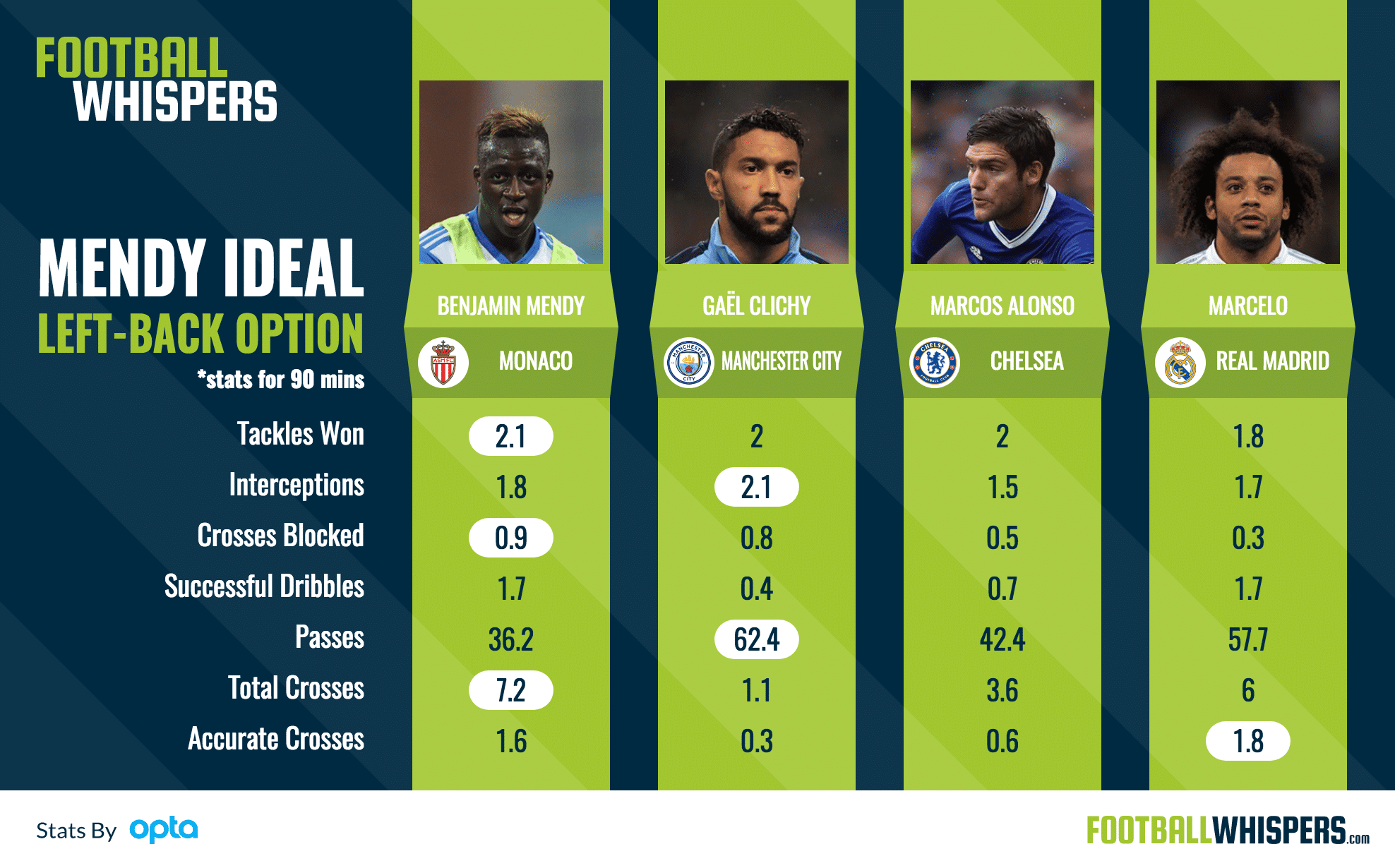 If you look at what Mendy has done in Monaco’s 4-4-2 and that defensively he isn’t as strong as playing on the front foot, add him to Chelsea’s 3-4-3, playing as a wing-back and it would be a shock if he wasn’t a perfect fit.

Previously linked with a summer move for Barcelona’s Jordi Alba, the Spaniard offered more in the way of attack than Marcos Alonso, something that Mendy does too, but he’s just as strong as either in defence.

In the air, Mendy is a weapon, strong, physical and won’t be over powered. Alba has more experience and is a winner, but Mendy, at 22 years old, has a higher potential.

The Frenchman matches Alonso in terms of tackles won, but makes more interceptions. Although they are top of Ligue 1 and faced little in the way of attacking threats, Mendy is still blocking more crosses than Alonso, up at 0.9 per 90 minutes.

With two teams playing some of the best football in Europe and relying on the wing-backs to provide width as the wingers cut inside, they see a similar amount of the ball. Alonso completes 42.2 passes per 90 to Mendy’s 36.2 – not far off.

Only Real Madrid’s Marcelo matches the Monaco man in terms of beating defenders, no one attempts as many crosses, exactly double that of Chelsea’s left wing-back. Alonso has been excellent this season, suiting Antonio Conte’s system perfectly, but with all the strengths mentioned above, as well as protecting his weakness, Chelsea would be the perfect home for the former Le Havre youngster.

Perfect for the Premier League

There’s little doubt that Monaco’s left-back is ready built for a life in England. He has the physical attributes, the pace to make an impact and the attacking intelligence to become a worthwhile signing for any club.

As ideal as he would as a left wing-back at Stamford Bridge, Manchester City’s need for someone of his skills is much greater.

If Pep Guardiola wants to make a move on Chelsea’s soon to be Premier League crown, they need Mendy, or definitely someone like him. Although there are not many who can do it as well as the 22-year-old France international.