On the one hand, given his work at Napoli, the immediacy of Maurizio Sarri’s impact at Chelsea shouldn’t come as a great surprise. But the extent at which he’s turned around and energised an under-performing and largely stale set of players, with relatively minimal changes to the squad, is still deeply impressive.

The search to establish the secret of his success is inevitable, in how he has installed Chelsea as Premier League title contenders as opposed to the fourth-placed challengers they were initially pigeon-holed as prior to the season.

At the heart of his reinvigoration of the Blues, outside of raising the levels of individuals such as Eden Hazard, has been his midfield. Jorginho’s arrival has been absolutely fundamental in shaping and crafting Sarri’s game plan on the field, providing a seamless transition from the football played at Napoli – i.e. the reason Chelsea hired the manager in the first place.

Jorginho’s passing rhythm, tempo and continuity in possession has been as crucial, as has been the ever-tireless work of N’Golo Kanté alongside him, the France international even being afforded a more offensive role under Sarri.

Having started every Premier League game – and Kanté one of five Chelsea players to have played all 1080 minutes this season – that pair’s place in the side appears set for the rest of the campaign, barring injury, but the identity of the third man remains in flux.

With Cesc Fàbregas out of favour and seemingly on his way out of the club, the third role has been a job share between a reborn Ross Barkley and the summer loan arrival Mateo Kovačić; the former has started five games and the latter seven.

The make-up of Sarri’s midfield has essentially been a reflection of his final season at Naples with Jorginho, Kanté mimicking the role of Allan and Kovačić and Barkley versions, we can assume, of Marek Hamšík and Piotr Zieliński, that is, in simplified terms, the more offensive-minded of the trio.

Jorginho bears the majority of the passing burden – 94.4 per 90, second-highest in the Premier League – and with Kanté’s energy – famously the work of “two players” according to Claudio Ranieri during his Leicester days – allows that third midfielder to have a greater sense of freedom.

They can be the further point forward but also have a responsibility to be what neither Jorginho or Kanté can: that is, a line-breaker and a physical link, beyond the path of a ball, between midfield and attack.

In terms of dribbling, it’s Kovačić who’s been the most efficient as the Croatian averages 1.69 per 90 compared to Barkley’s considerably more modest 0.77; one reason, perhaps, why the loanee has enjoyed marginally more first-team action.

Where Barkley has shone is his ability to support Willian consistently as while Kovačić is averaging a very strong 2.31 scoring attempts per game, the England international is out-performing him on 2.91.

Although, curiously, the Croat is averaging more touches in the opposition penalty area (2.61) than his teammate (1.94). That could maybe be down to their style of play with Kovačić naturally more inclined to hold onto the ball or because Barkley likes to arrive late and first time onto chances ala Frank Lampard.

Either way, it’s clear that both are performing the task of being attacking midfielders – they’re in the top ten among players of a similar position in the Premier League for both metrics – while also being secondary distributors and holding position in a defensive sense.

In terms of that distribution, both are posting career-high averages for accurate passes per 90: Kovačić at 87.4, when his previous best for a league campaign was 72.0 with Madrid last season, and Barkley a starker leap at 77.6 with his previous highest being 53.0 at Everton in 2014/15.

That shows not only the demands placed on them by Sarri but also how they’re successfully adapted to the situation, Barkley in particular.

But creatively, Kovačić has the edge with his 1.38 open play passes well in excess of Barkley’s 0.58, although the Englishman’s xA is superior at 0.14 to 0.06, indicating the quality of chances he fashions are superior to his teammate.

What this back-and-froing between their qualities means, in the grand scheme of things, however, is that because their levels of production are so similar – with a few exceptions – there is, in Sarri’s 4-3-3, only place for one of them.

If Jorginho wasn’t such a metronomic passer, perhaps one could adopt that role, although do they possess the same level of positional discipline? While neither’s defensive game is anywhere near the same scary-high standard of Kanté’s (frankly, whose is?).

As long as those two are fit, they will start: their characteristics and performance levels mean they simply have to. But can there ever be a scenario when both Kovačić and Barkley can play?

Given Sarri has used his tried-and-trusted 4-3-3 for all 12 Premier League games and rarely deviated away from it with Napoli, a formation change is unlikely, with a midfield diamond the only logical option. It will, therefore, require one of Jorginho or Kanté to drop out.

The obvious Mr Indispensable is Kanté, such is his worth defensively. As he did for France at the World Cup, allowing Paul Pogba and Blaise Matuidi to play further forward, the same principle could be applied to Chelsea, against the right opposition, with Barkley and Kovačić. 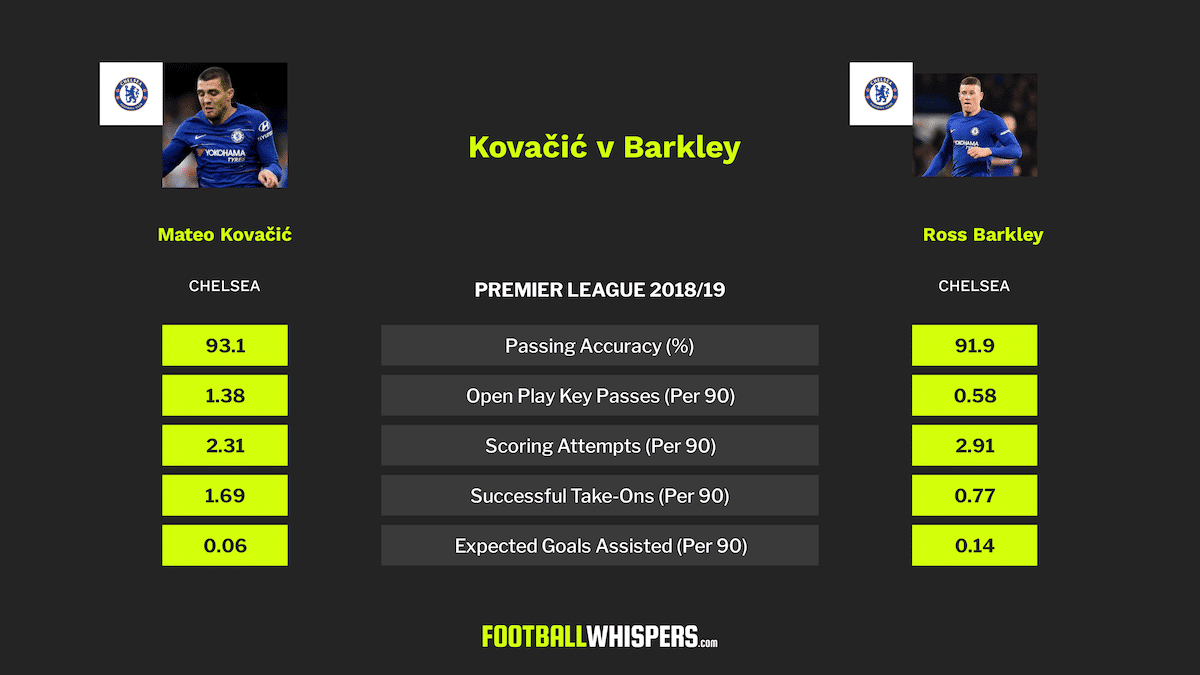 It should be remembered as well that Kovačić at Madrid did occupy a defensive role at times, meaning he could rein in his natural instincts of attacking the penalty area

However, Sarri’s unwavering faith in Jorginho means it’s the Italy international who’s likely to be viewed as undroppable. And in that scenario, it’s hard to envisage a place for both Barkley and Kovačić.

Off the ball, Jorginho is positionally outstanding but simply doesn’t cover the same distances as Kanté. Once Chelsea’s midfield line is broken, it’s hard to see them being able to recover without the Frenchman alongside him.

As an offensive option with Chelsea chasing a game, 100 per cent; but in a normal match situation with Sarri determined to improve the Blues defensively, the responsibility he bestows upon Jorginho combined with the slight risk of leaving Kanté means, for the foreseeable future, Barkley and Kovačić will have to get used to that job share.