Chelsea boss Antonio Conte has made no secret of his desire for new players this month. In fact, his message has been delivered loud and clear since last summer.

“I do not aim high with my requests, especially as in my history I’ve rarely been given the players I asked for,” he told Sky Italia after Chelsea's 2-2 draw with Arsenal at the start of the month. “I always ended up at clubs who were running an austerity programme.

“I just try to do my work. If someone arrives, good. If they don’t, then that’s fine too. I have to continue my work either way.”

A striker to back up Álvaro Morata is desperately needed, while Juventus‘ Alex Sandro is a long-term Chelsea transfer target. A centre-half, too, could be sought if the out-of-favour David Luiz leaves.

One area which is getting little attention, though, is right wing-back. The summer arrival of Davide Zappacosta from Torino was meant to bolster Conte's options, supplementing last season's comeback kid, Victor Moses.

But the Italian has flattered to deceive in his first four months at Stamford Bridge – and there have been suggestions he might not have been Conte's first choice – while Moses appears to have regressed to the player who bounced between Liverpool, Stoke City and West Ham United on loan after failing to convince at the Bridge.

There was little to no expectation placed on the Nigerian international's shoulders when Conte swept into Chelsea two summers ago. Perceived wisdom said he would finally be shipped out for good, four years after arriving from Wigan Athletic.

In the opening two months of the season he played just twice with both outings in the EFL Cup. Yet when Chelsea were humbled 3-0 at Arsenal in late September and Conte – now famously – abandoned 4-2-3-1 for 3-4-2-1, Moses was the biggest beneficiary.

A winger throughout his career to that point, his pace, coupled with his work-rate and strength, made him the ideal candidate to play right wing-back. It proved a masterstroke and the former Crystal Palace prodigy did not look back.

But this season the 27-year-old's form has mirrored Chelsea's. After storming to the Premier League title last term, the Blues find themselves in third, 16 points behind the juggernaut that is Manchester City. 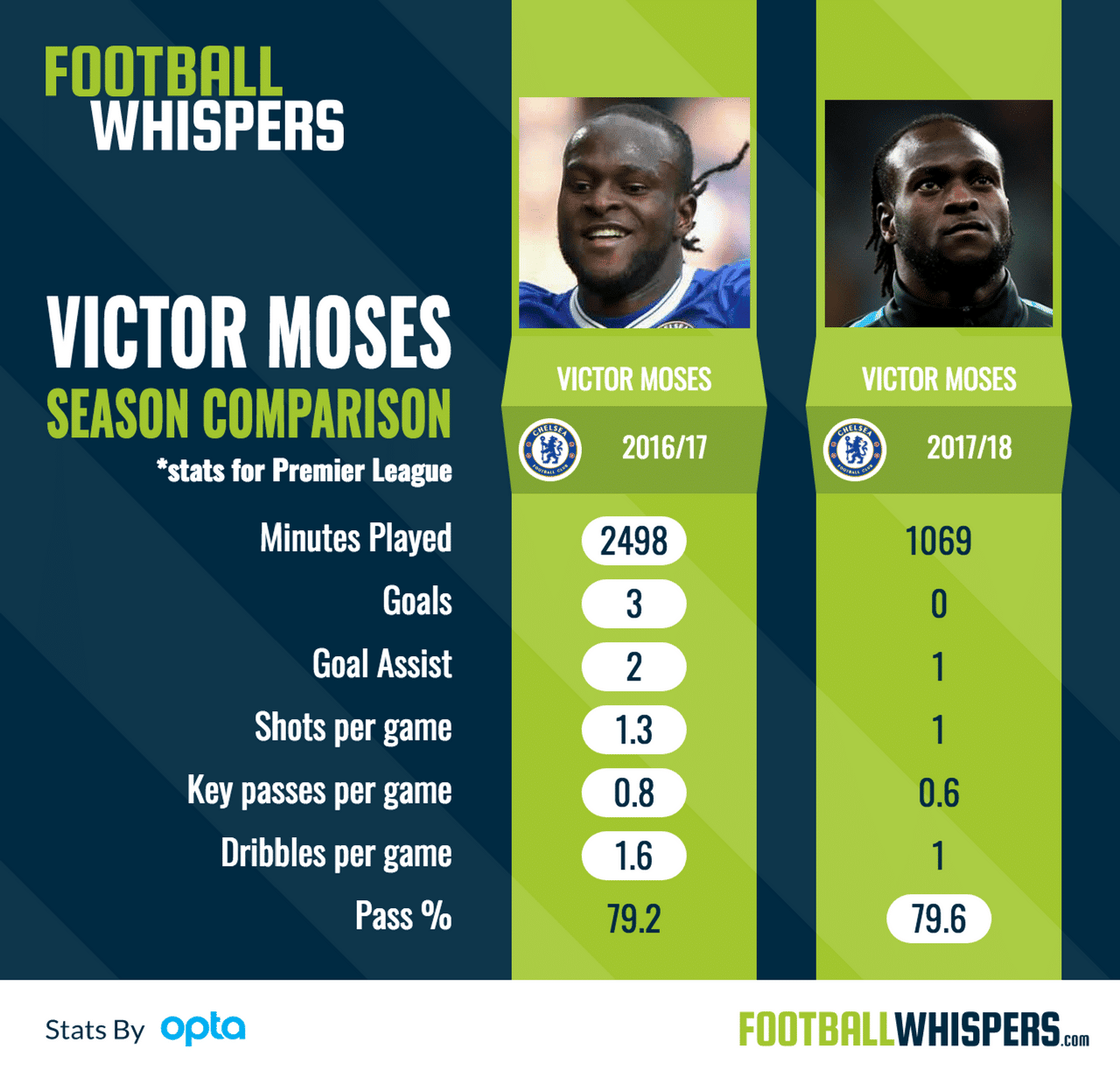 Moses has failed to hit the heights of last season and the statistics bare that out. He is attempting fewer shots per game, as well as providing fewer key passes and dribbles. The only number which is up, marginally, is his pass completion percentage. Although he is halfway to last season's assist tally in the Premier League, his expected goals per 90 (xG90) is down from 0.14 to 0.08.

It is a similar story defensively, too, where all of his numbers bar interceptions per game have seen a decline since last season. 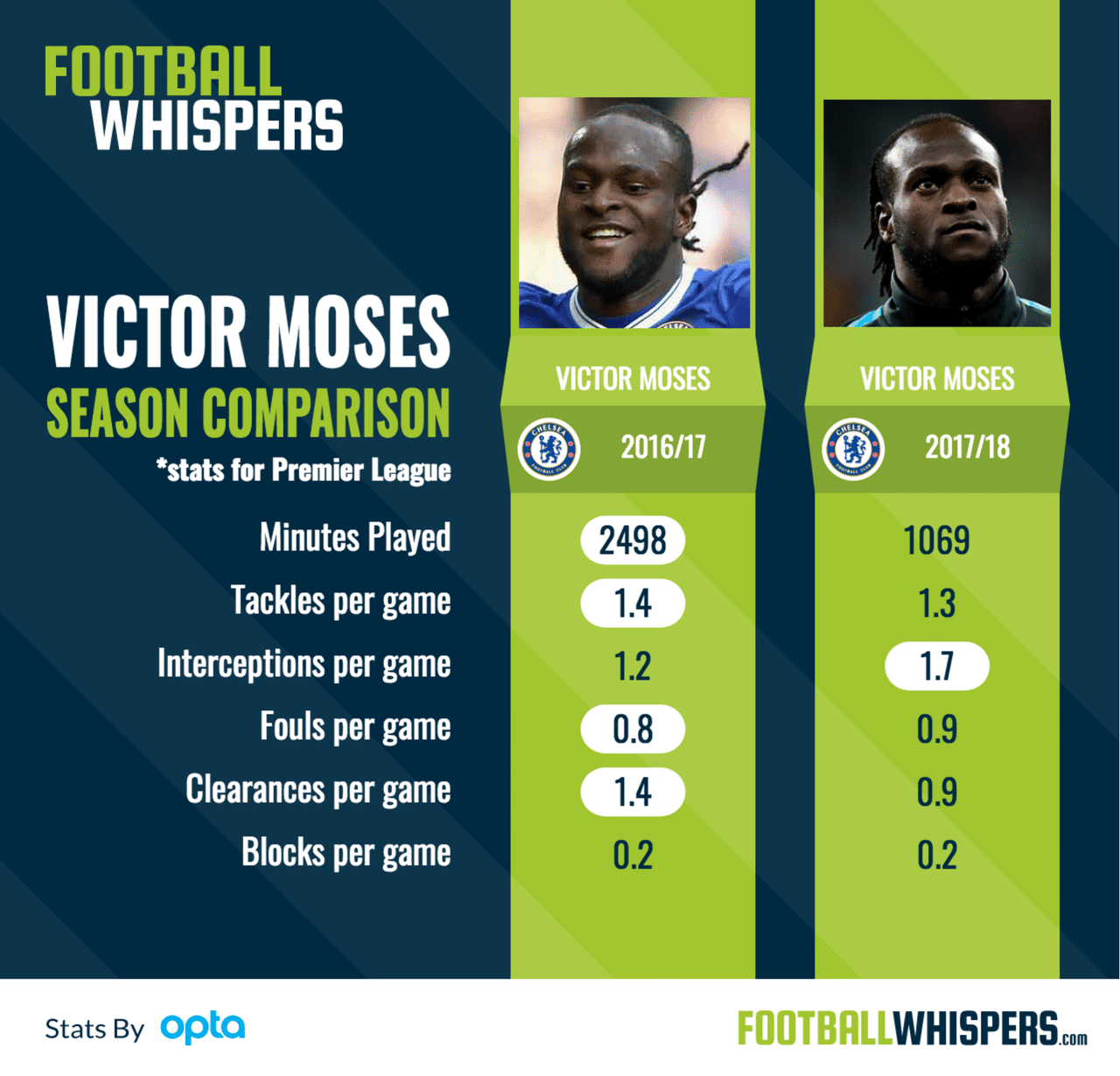 Interestingly, on the opposite flank, Marcos Alonso has shown no sign of the same decline in form. In fact, the Spaniard has already matched last season's six-goal tally in the Premier League and is averaging more shots (two to 1.5) and key passes (one to 0.8) per game than last term. He is, however, attempting fewer dribbles (0.7 to 0.5) than in Chelsea's title triumph.

So why is Moses struggling to recapture last seasons's form? In offensive terms, Chelsea are actually averaging more possession (54 per cent to 53) this year and creating more chances – an average of 12.8 per game versus 11.7 last season.

But what can't have helped is the Blues' style of play. Last season Conte's men scored the most goals on the counter-attack in the Premier League (seven). This term they are without a goal on the break. Given Moses' pace and propensity for carrying the ball forward at speed, a more considered, slower style of build-up is counter productive for Chelsea' No.15.

But it isn't only Moses who is suffering. Zappacosta, the man brought in to give him some competition, has also struggled to rediscover his best form at Stamford Bridge. The only metric in which he has shown improvement on last season in Serie A is dribbles per game. 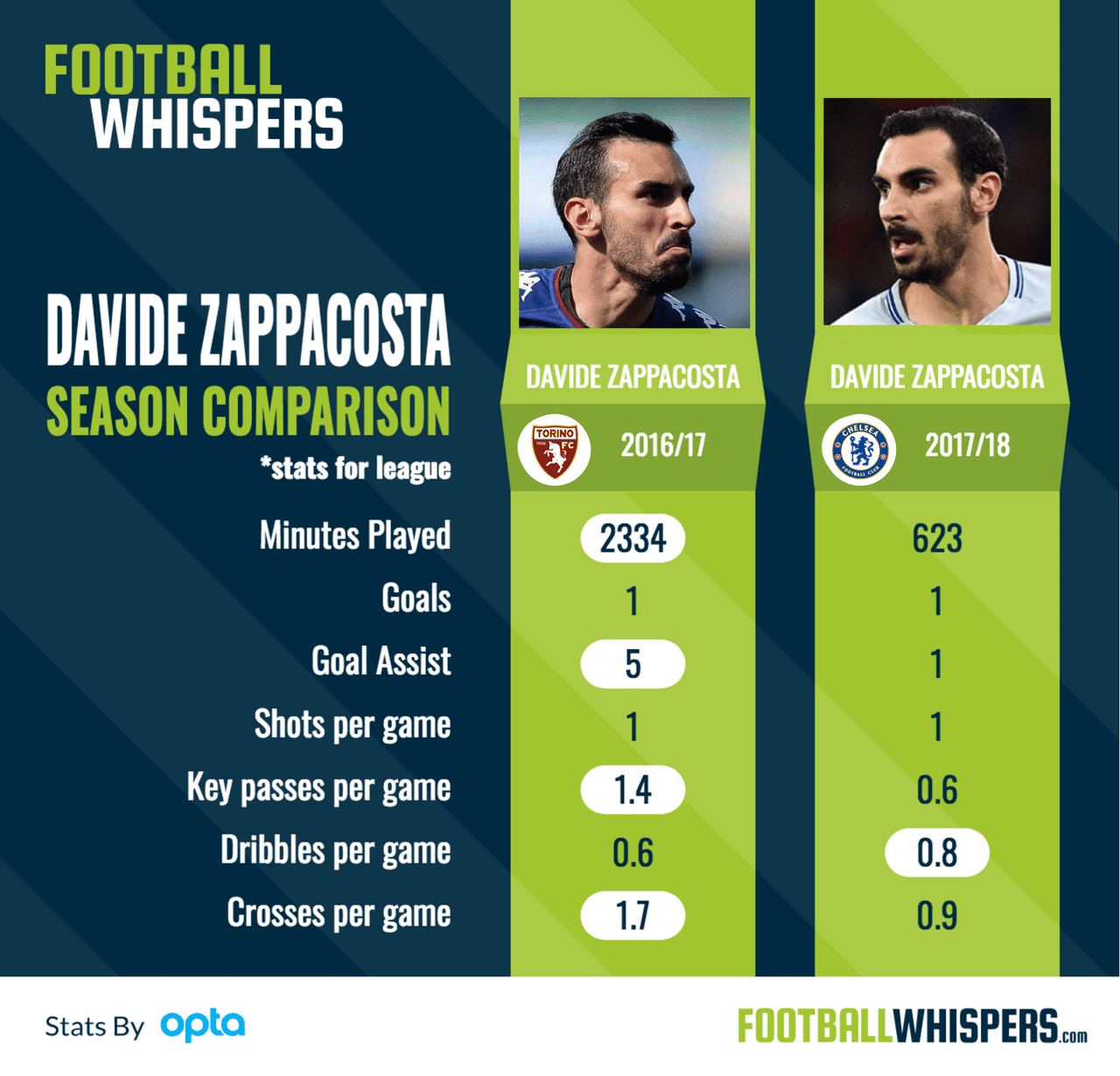 The Italian's dip in form can be explained, to some extent, by the fact he is new to Chelsea and the demands of Premier League football. It might be a cliché peddled by pundits but there is truth in the assertion England's top flight is quicker, rougher and tougher than its continental cousins'.

Zappacosta is not without merit either; he has shown glimpses of what he can do, most recently in supplying the assist for Alonso's equaliser against Arsenal. But all too often he has been solid without making a decisive impact.

At Torino last season, more of the play was directed down Zappacosta's side than any other area of the pitch (40 per cent). Yet at Chelsea, the Italian international has seen the ball channelled down the right-hand side just 36 per cent of the time. 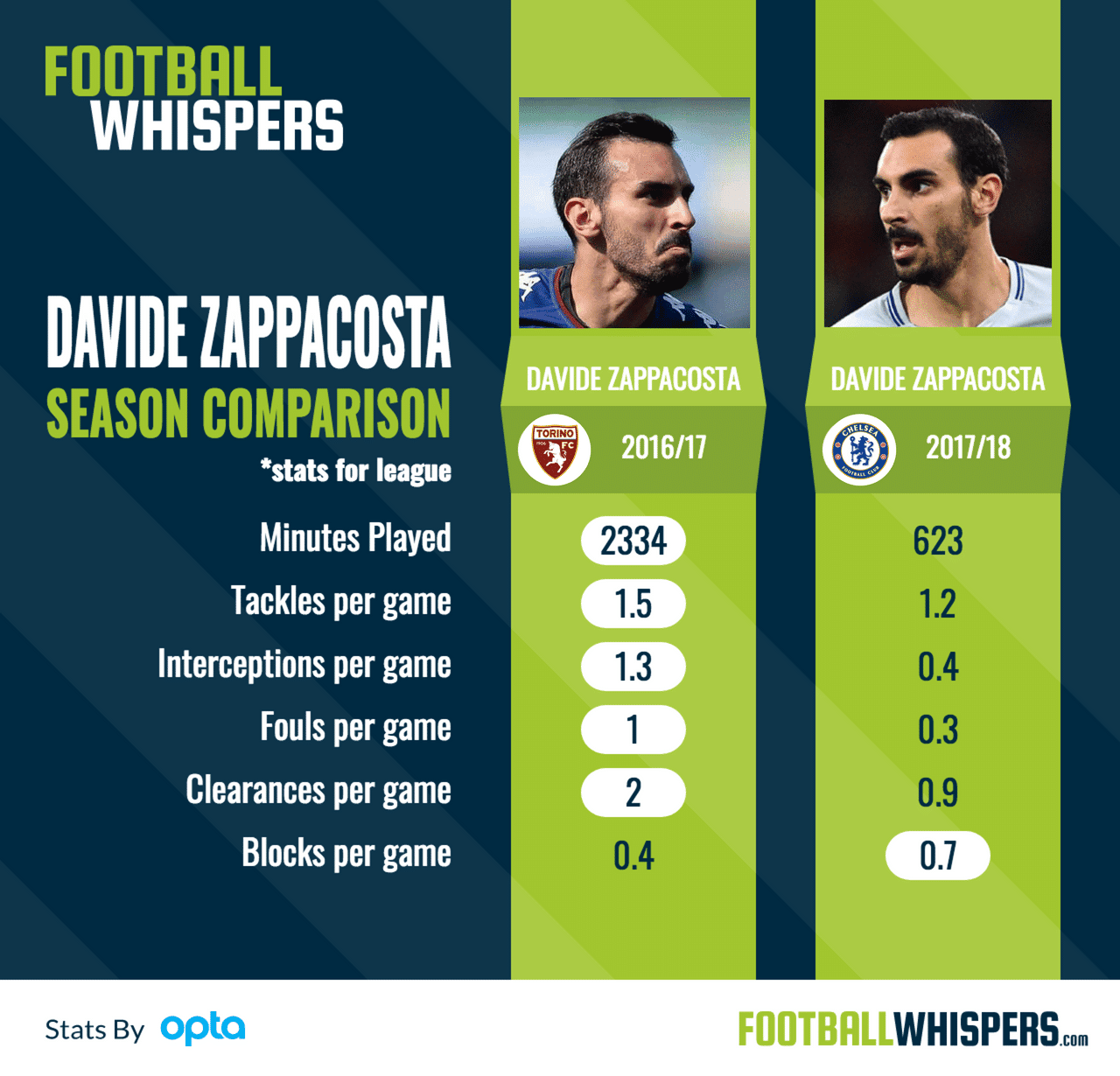 It's a similar story defensively where Zappacosta has posted noticeably worse numbers in the major metrics; only the number of blocks he is making per game improving.

But how do the Chelsea duo compare to some of the peers? Although José Mourinho have favoured four-man defences for much of this season so we cannot use Kyle Walker and Antonio Valencia as yardsticks.

Instead, let's take Tottenham Hotspur‘s Kieran Trippier as a comparable player utilised in a wing-back system. It is interesting to note he has comfortably more assists (four) than either Chelsea player. But he does this by crossing from deep, a fact reflected in his 0.4 dribbles per game.

From a defensive point of view, the England cap is way ahead for tackles per game (2.4) but comes last for interceptions (0.4), well behind Moses on 1.7 per game. That, however, can be attributed to defensive strategy as Spurs press to win the ball, rather than holding their shape and waiting to pick off loose passes.

Another right-sided wing-back playing in a top-six team is Arsenal‘s Héctor Bellerín. Like Zappacosta and Moses he has not been at his best this season and has one goal and one assist. The Spaniard tries one shot per game, makes one key pass and completes just 0.7 dribbles on average per game. 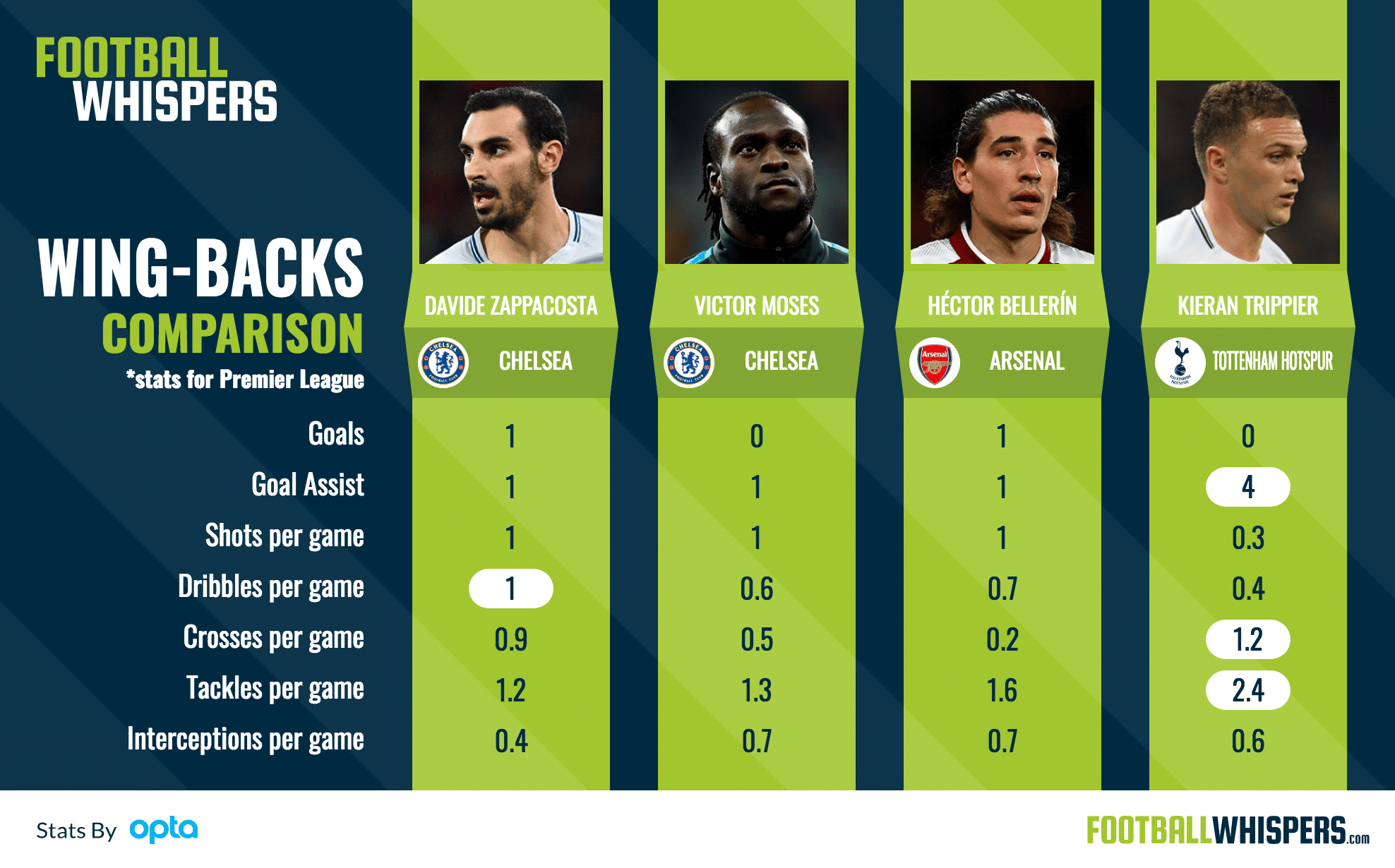 The statistics will not make pretty reading for Conte. In summary, Zappacosta and Moses come out on top in just one metric and defensively they are considerably less effective than Trippier and Bellerín despite playing in a side higher in the Premier League standings.

The Chelsea boss, unlike his wing-backs, is never backwards about coming forwards. He has been quick to drop under-performing stars from last season – see David Luiz – and simply refuses to use signings who do not meet his high standards – ask Michy Batshuayi. Conte will not have been impressed by his wing-back's contribution this term and if he remains at the club beyond the end of the season, it is an area he will surely look to strengthen.