Eden Hazard spent over a year playing a high-stakes game of poker with Chelsea.

The Belgian held all the cards when it came to his future at Stamford Bridge and he knew how to play his hand. There were a few bluffs, throwaway remarks designed to ensure Chelsea stayed at the table, but Hazard knew what he wanted.

And, according to several reports, the Belgian has finally revealed his hand. In an interview with RMC – recorded two months ago but released this week – he said: “I know what I am going to do. I have made a decision.”

That decision is to join Real Madrid in the summer, by which point Hazard will have only one year remaining on his contract at Chelsea. The Premier League club can't afford to lose a valuable asset for nothing in 2020 and are ready to accept an offer of around £100million.

The Spanish giants are reportedly willing to match that figure; the stars are aligning for the Belgian.

“Real Madrid is the best club in the world,” Hazard said in October. “I don’t want to lie today. It is my dream since I was a kid. I was dreaming about this club.”

If, and more likely when, Hazard departs for the Spanish capital he will leave as a Chelsea great.

He has won two Premier League titles, the FA Cup, the League Cup and the Europa League during his time at Stamford Bridge. He has scored over more than goals and produced countless moments of spellbinding skill. And yet there is a feeling of ‘what if' when it comes to the 28-year-old.

Hazard is a player of incredible talent. Only a handful of players in world football can dribble past defenders with such ease, and fewer can match that with flawless technique. His ability on the ball is almost unrivalled.

However, what has been questioned is his mentality within games and across seasons. Does he have the killer instinct of a truly elite star? When he scores one, does he want a second? If he gets a second, does he want a third? And if Chelsea are struggling, can he rise above it and win a game?

“It is not important how many goals I score,” he said in September. “You know me, I don’t care about that. I just want to enjoy my football, win games.”

It is something of a laissez-faire attitude and perhaps why Maurizio Sarri questioned whether Hazard could be considered a team leader last month.

“He's more an individual player than a leader,” the Italian explained. “He is very important for us because he is a great player. He always can win a match in two minutes, sometimes in one minute, but at the moment he’s not a leader.”

Should he move to Real Madrid in the summer, Hazard will need a mentality shift. The Bernabéu crowd are notoriously difficult to please – Cristiano Ronaldo, the club's all-time top scorer, was even whistled on occasion – and given he would be viewed as a replacement for the Portuguese superstar the pressure will be on.

For Chelsea, their No.10's departure would be a disappointment. However, it may prove a blessing in disguise.

Hazard hasn't bought into Sarri's football. As the Italian said, he remains too much of an individual in a system that requires almost perfect cohesion. “He likes very much to go in the direction of the ball, wanting the ball at his feet,” the Chelsea boss admitted in January.

And Hazard doesn't hide the fact he doesn't conform to what his managers demand.

“In my career I have frustrated all of my trainers,” he told France Football. “Now I am frustrating [Maurizio] Sarri. They think I need to mark more, do more here and there, do more than I am doing. And the next coach I have, I will also frustrate him.”

Sarri has encountered several problems at Chelsea this season, some of his own making, others less so. The fact the club's star man isn't willing to compromise, isn't willing to learn and adapt, is a major issue.

The graphic below highlights the problem. At Napoli Lorenzo Insigne played the ‘Hazard role', namely being stationed on the left of the attacking three. Yet his stats for the 2017/18 Serie A campaign are noticeably different to what Hazard has managed in the same system. 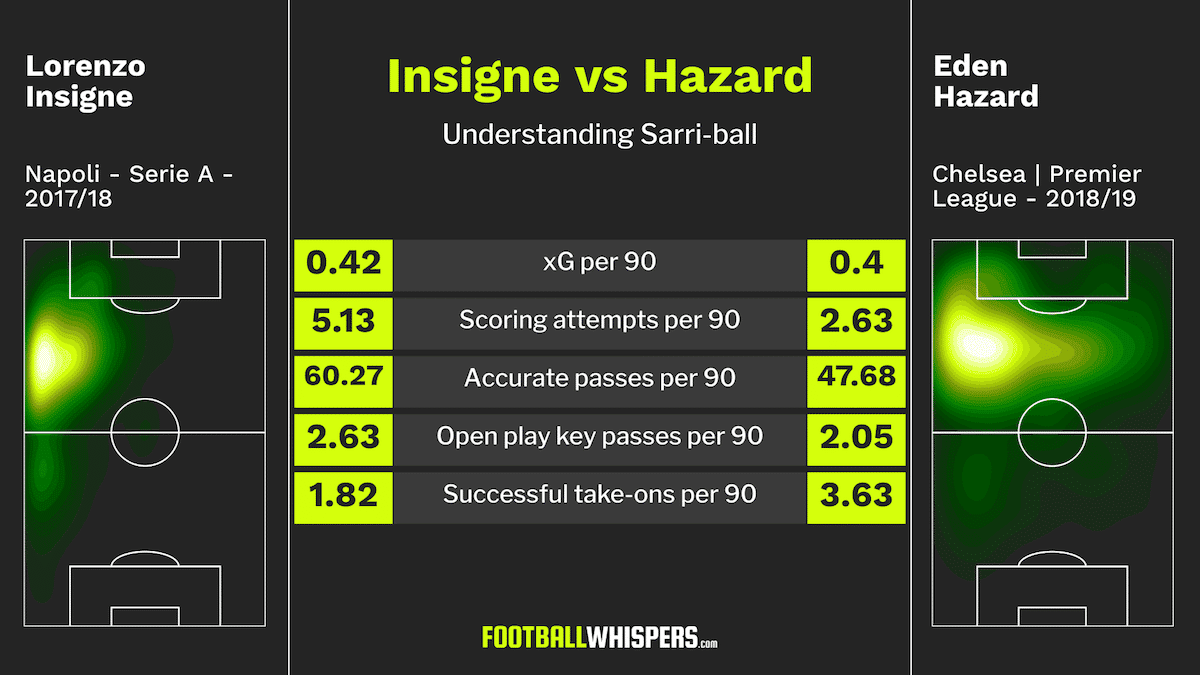 There are caveats, of course, the most notable of which is that Hazard has spent a period leading the Chelsea attack this season as a false nine. Yet the numbers suggest the former Lille star hasn't subscribed to Sarri's football; namely one-touch passing, constant rotation of the ball and plenty of movement to create space.

The Blues may decide to dispense with Sarri, either in the coming months or at the end of the season. However, the Italian has a tactical structure that, given the right players, would enable the club to move on from Hazard.

Chelsea may have not wanted to cash in their chips when it came to their brilliant Belgian. But he may have inadvertently created the ideal situation for them to do so. Forget the house, this may be a rare situation where everybody wins.