It was no wonder Liverpool pursued lightning-quick winger Mohamed Salah in the summer. The Egyptian had terrorised defences across the peninsula during his time with Fiorentina and Roma. The current Premier League joint-top scorer fired in 17 goals and provided 12 assists in all competitions for the Giallorossi during 2016/17, and there was one particularly grateful recipient.

Former Manchester City striker Edin Džeko enjoyed his best-ever campaign last term, his return of 29 league goals seeing him finish the season as capocannoniere, the top scorer in Serie A. That goal ratio saw Chelsea come knocking in the January transfer window in order to provide some competition for an inconsistent Álvaro Morata up front and some cover for the departed Michy Batshuayi.

That man turned out to be Olivier Giroud, but an excellent performance against Napoli at the weekend may have had Chelsea fans wondering whether they missed out on the real prize. The first goal saw Džeko rise above marker Elseid Hysaj to latch onto a floated cross from Alessandro Florenzi, heading home to give the visitors a 2-1 advantage over the current Serie A leaders.

His second was a truly superb solo effort, the striker receiving a cross-field pass from Aleksandar Kolarov just outside the box before taking advantage of an unusually static Napoli defence to curl a beautiful left-footed shot past Pepe Reina.

That made the scoreline 3-1, paving the way for an eventual 4-2 defeat of leaders Napoli that would blow the title race wide open and give Roma an advantage over those battling them for a Champions League qualification spot.

It was a sublime performance from the Bosnian who, per StatsZone, completed three of the four take-ons he attempted and hit the target with three of the four shots he took. Džeko also won three of five aerial duels in that encounter and, while he is often accused of not participating fully in matches, he also helped his team-mates defensively.

That is a vitally important part of stopping the Napoli machine from functioning and the 31-year-old did his share of work at that end of the field, winning one tackle and completing all three of the headed clearances he attempted. He also completed all four of his passes in the defensive area of the pitch, ensuring he didn’t give the ball away in dangerous areas under Napoli’s intense pressing. 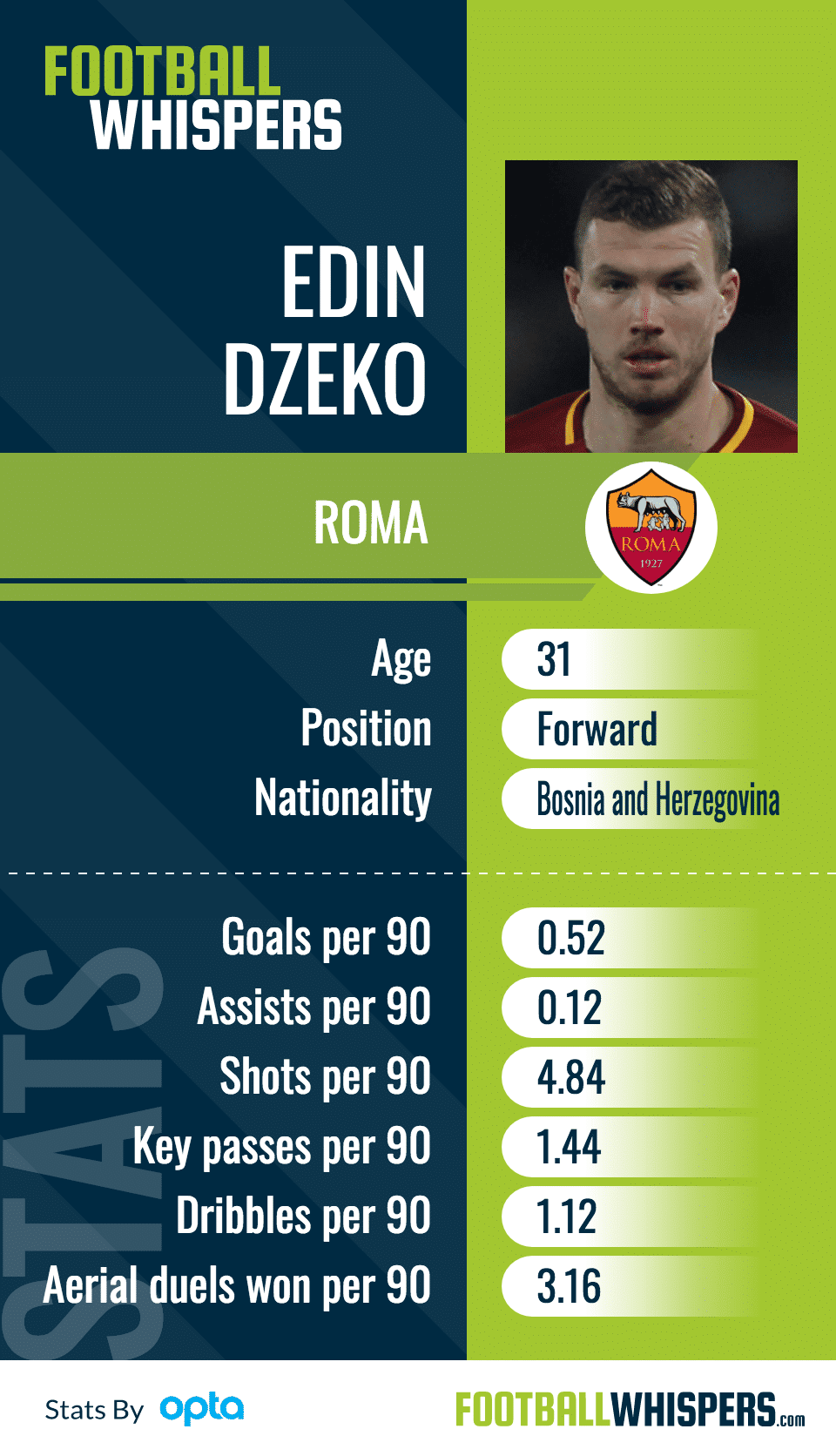 “We put in a great performance against the team that plays the best football in Italy,” the striker told Mediaset Premium after the match. “I do not look to the past, but I say we aren’t as bad as people think. Before kick-off, some thought we were meant to lose 5-0. The last few weeks have certainly not been easy, but I do not look for excuses. If I do well or not, I don’t seek excuses. I just want to work for the team.”

His words regarding “working for the team” hint that his improved performance was down to an increase in effort, and a look back suggests Džeko had certainly increased his work-rate for the huge clash with Napoli.

He had only played the last 15 minutes of the previous game with Milan, however a 2-0 win for Roma against Udinese on February 17th saw Džeko misplace 11 of 31 passes, fail in both of his attempts to make a tackle and complete just one headed clearance in the 90 minutes.

It was also a match in which he failed to score, with three of his four attempts on goal off target. Indeed, this wayward shooting was even a problem when he finished as top scorer last term. Džeko took 5.2 shots per 90 minutes to bag 29 Serie A goals in 2016/17, according to WhoScored. Torino forward Andrea Belotti, by contrast, needed just 3.8 shots per goal to finish with a tally of 26.

Despite his league-topping tally, Roma supporters often became frustrated with Džeko, leaving them to ponder just how many goals a more clinical finisher would have bagged with such excellent service from Salah last term.

“At Roma it’s similar to with Bosnia, they do not criticise you, they insult you. So I'm used to it,” the striker complained to Il Messaggero in January of last season.

“At home, you will be OK three times, but if you miss a fourth time, the insults start again. It’s as if they are waiting for the right opportunity to hit you. I can just remember what I have seen and then I often think about how I do well throughout the match and then if I miss one chance, everyone talks about the miss. Only that.”

While it might seem like the Giallorossi supporters were behaving in somewhat of a spoiled manner, anyone who watched Roma last season could testify that – irrespective of the numbers – Džeko is a frustrating player to watch.

“Džeko does really well between the lines,” Roma boss Eusebio Di Francesco said after the match with Napoli. “He’s a No.9 when close to the goal, but can do well in other areas too. I’ve seen few players like him. Zlatan Ibrahimović could do that, but was more determined and Edin lacks that at times.”

Such comments, even after a good performance, further highlight that while Džeko is capable of excellent displays, he is also lacking in some areas.

Tough taskmaster Antonio Conte may have been able to bring the best from him, but Chelsea supporters may have dodged a bullet here by not having to endure the frustration of watching Džeko every week.