After Chelsea had dispatched Crystal Palace to extend their winning run in the Premier League to six matches, the praise was understandably effusive for Frank Lampard and his side.

The Blues, temporarily, sat second in the table. They were ahead of Manchester City. Ahead of Arsenal. Ahead of Manchester United. Ahead of Tottenham Hotspur. And this is with a team full of academy graduates and without summer signings due to the club's registration ban.

Yet there was one concern raised: the Blues' defence. Lampard's side have conceded 17 goals in the Premier League this term, the second most, along with Arsenal, of any side in the top half of the table.

“Frank is making all the right decisions,” Owen Hargreaves told BT Sport after Chelsea‘s win over Palace prior to the international break.

“The only thing for Frank is that while they're [currently] second in the league – and that's unbelievable – they've conceded as many goals as Newcastle United. Offensively they're outrageously good but if they just tidied up that defensive part they will be in the title race.”

Hargreaves is right. No side conceding an average of 1.42 goals per game will taste success come the end of the season. Trying to outscore opponents is a nice idea but it's one that rarely, if ever, bears fruit.

However, where Hargreaves is wrong is his assertion that Lampard needs to tidy up the Chelsea backline. Delve a little deeper – beyond that 17 goals conceded figure – and it's clear the Blues head coach has already done his housework.

As the graphic below, produced using Football Whispers‘ exclusive Content Toolbox, highlights a marked defensive improvement over the course of the last six Premier League matches. 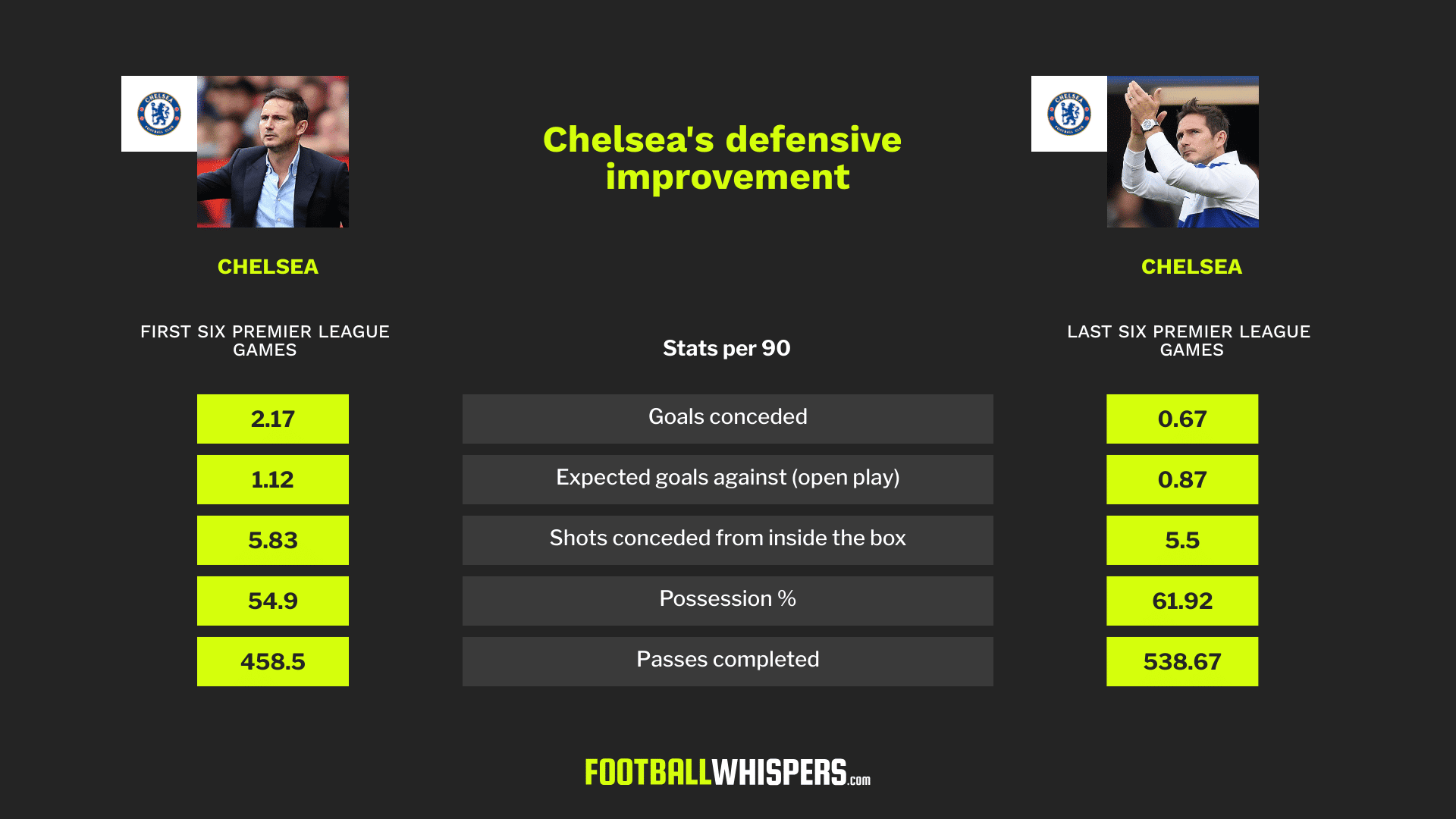 What's most striking is how dramatically the goals conceded figure has dropped. In truth, that was always likely to happen.

In the first six games of the top-flight season, the Blues' opponents were scoring with 24 per cent of their shots on goal. It was a big overperformance and one which, understandably, led to questions being asked of goalkeeper Kepa Arrizabalaga.

In the last six matches, their opponents' conversation rate has dropped to just seven per cent. As a result, Chelsea have stopped shipping as many goals. Not a great surprise.

What is perhaps more intriguing is the change in open-play expected goals against per 90. In those opening six matches, which included games against Manchester United, Leicester City, Wolverhampton Wanderers and Liverpool, the Blues were far too open, far too easy to break through.

In open-play, the Blues were conceding chances worth 1.12 expected goals per 90. Since the defeat to Liverpool, that has now dropped to 0.87 . Over the same period, only the league leaders can better than the figure (0.84).

The defensive duo of Kurt Zouma and Fikayo Tomori have impressed. The latter has even broken into the England squad. “You can see the way he plays, he is very comfortable with the ball and without it he has got pace and can defend very well, even on one-on-ones he doesn’t get beaten,” Lampard said of Tomori earlier this month. 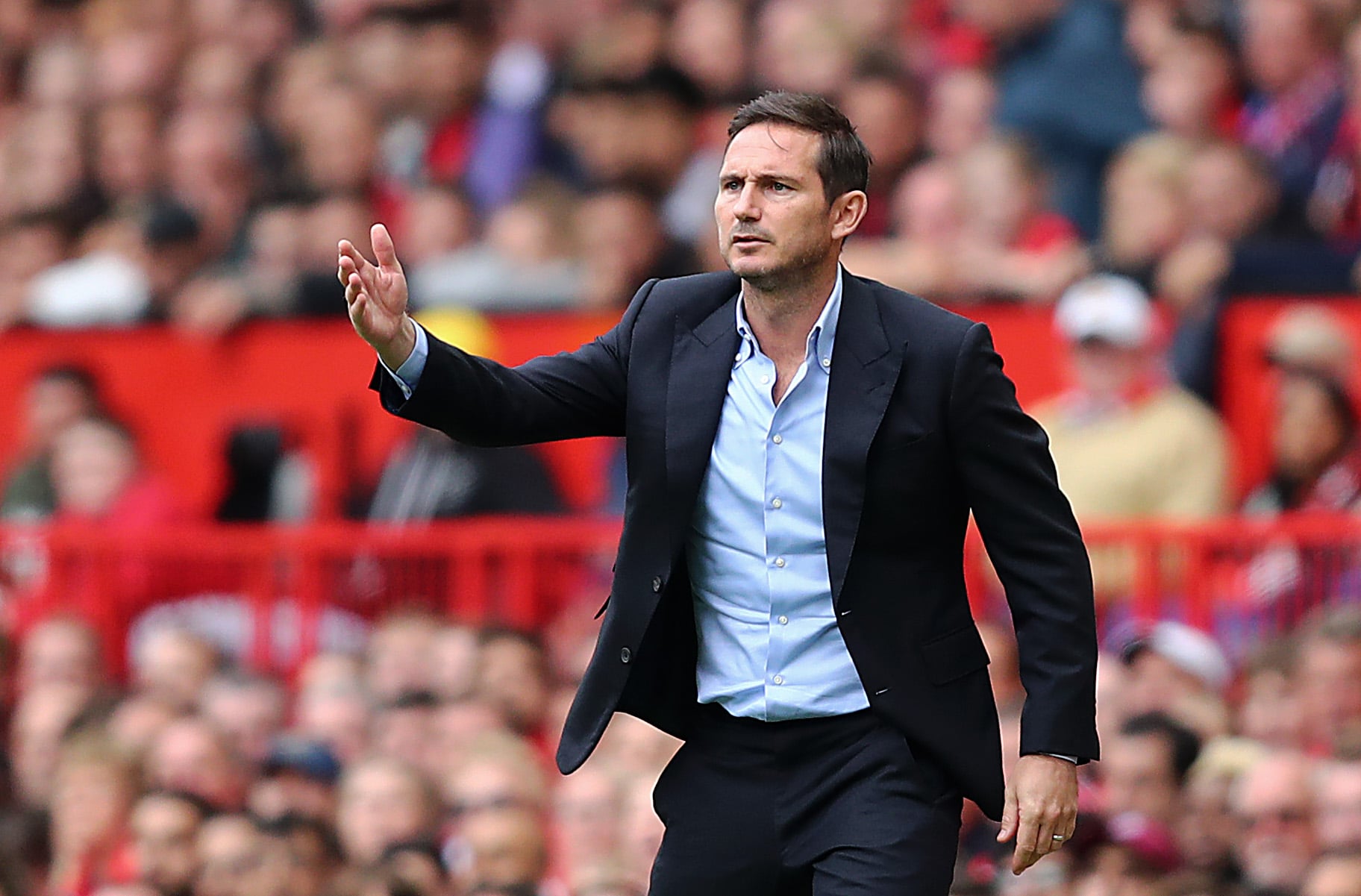 “He is a very good player for us. Like everyone, he is working hard because the competition is hard. We just want to be on the pitch doing well.”

From the above, it would be easy to feel Lampard has cracked it. Chelsea are producing high-quality chances with ease and aren't allowing the opposition clear opportunities on goal.

Yet there are caveats. The biggest of which is the opponents Chelsea have faced in this six-game run: Brighton and Hove Albion, Southampton, Newcastle United, Burnley, Watford, Crystal Palace.

The old adage that a team can only beat what is in front of them rings true, but these are hardly the Premier League's most imperious or prolific sides. Two of them are in the relegation zone. Only one is in the top half.

Chelsea would expect to beat these sides. More importantly, they would expect to dominate them, especially in terms of having the ball. And this is where the second caveat comes in.

The Blues' possession has spiked in the last six games to 61.92 per cent. They are controlling matches, restricting their opponents to hopeful counter attacks. Quite simply, opposition sides are not having enough of the ball to be a consistent threat.

It's an effective tactic, one several of the very best sides have utilised. Starve opponents of the ball, wear them down, and then take advantage. But that is, despite the recent results, not what Lampard has built at Chelsea.

His side press and harass in order to create transitional situations. And when they win the ball back, players flood forward to threaten the opposition goal. When it works, it can produce breathtaking, swashbuckling football. Think Chelsea's comeback against Ajax in the Champions League.

Their more measured approach – one which has benefitted the backline – has come as a result of the sides they have faced. But on Saturday against Manchester City, the Blues will face a true examination of their new-found defensive solidity.

If they are able to contain and frustrate the Premier League champions, who will dominate the ball, and come away with a positive result then perhaps Lampard has truly found a formula for success.