A few years ago, suggesting Chelsea would sell Juan Mata would have seemed almost sacrilegious.

The Spanish star was undoubtedly one of the most popular players at Stamford Bridge. Twice named their Player of the Year, Mata was instrumental in helping the club to Champions League, FA Cup and Europa League victories. Yet he found himself marginalised upon José Mourinho’s return to the club.

Eventually Mata was sold to Manchester United for £37.1million – the final signing of David Moyes' ill-fated reign. Could he be joined by another Blues player this summer?

That leaves the Brazilian out of the side and there is talk he could join Mata and Mourinho at Old Trafford.

On the surface it is easy to see why Willian has been the one to miss out with Pedro shining in one of the two No.10 spots and Real Madrid transfer target Eden Hazard continuing to torment opponents in the other. The duo have been devastating of late, scoring and creating goals at a remarkable rate and leaving 29-year-old to take a seat on the bench.

Yet, as a deeper look into their statistics shows, Willian still has much to offer. Despite playing second fiddle to Hazard and Pedro, he leads the way for assists (3), has just one goal fewer than the former Barça man (2) and attempts more dribbles per game (1.4) than the Spaniard.

In terms of his expected output this season, Willian has over-performed in terms of xG (expected goals) and xA (expected assists). 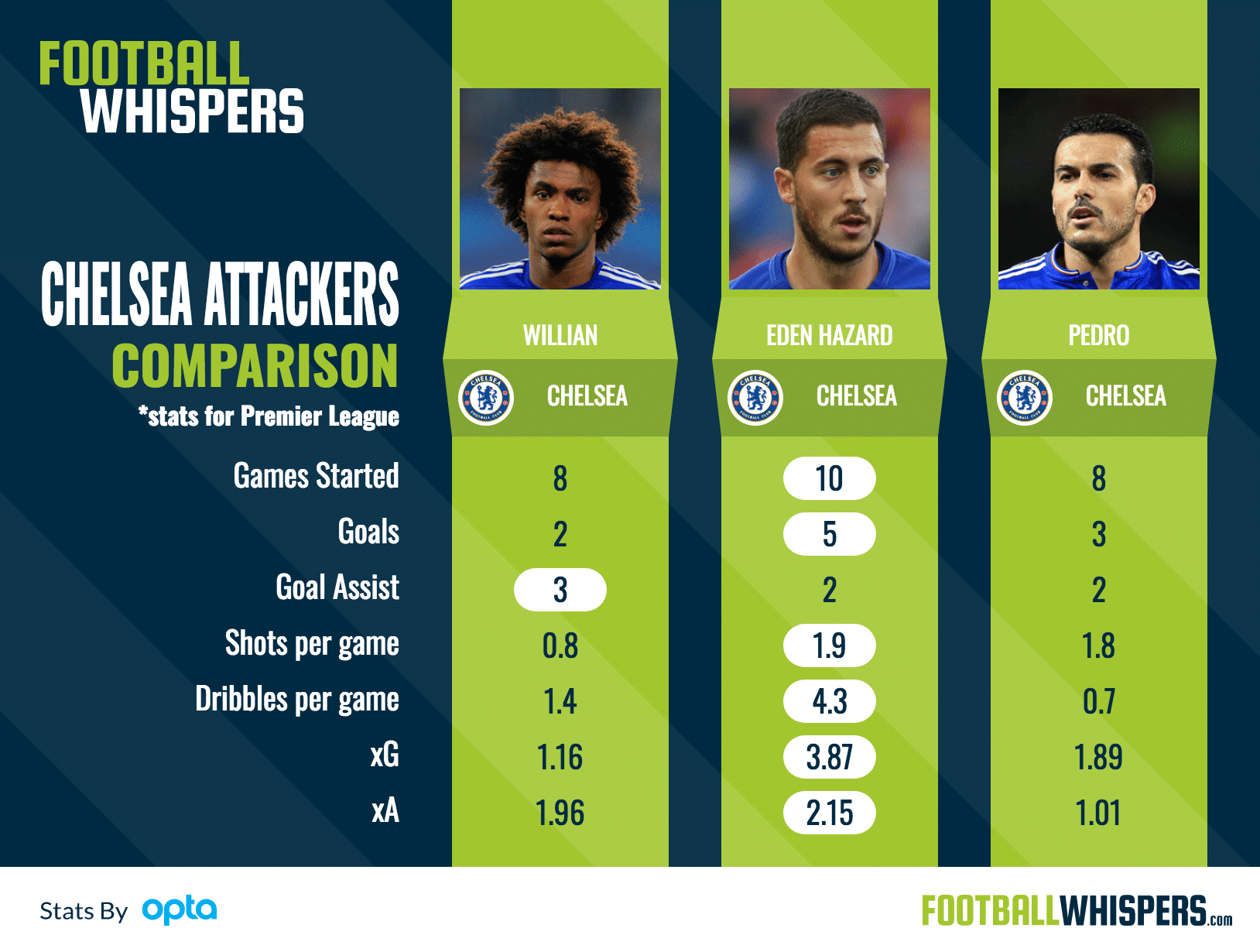 Then there is his dead ball prowess, a weapon that can help any side. “After training I hit ten balls every day. I have to do it every day in order to be confident on the pitch,” he says. “These free-kicks can decide the game. Sometimes you only have once chance and you need to be confident. I want to score more.”

Fans of the former Shakhtar Donetsk star would argue their man deserves to feature more, perhaps pointing to a match-winning display against Tottenham in the FA Cup last season as proof he can deliver when it matters.

However, Conte – the only man whose opinion really matters – clearly believes his side is better balanced with Pedro and Hazard  behind Álvaro Morata with results vindicating his choice.

Time To Move On?

After four successful seasons, it could be that it is time for the the Brazilian to move and the reported £45million fee would be good business for all concerned.

Mourinho would get another versatile attacking player to help United turn some of their deadlocked games into victories, while Chelsea would pocket a useful sum of money.

However, the Blues boss – having already left Juventus in a disagreement over transfer policy –  is unlikely to be impressed given he has already been vocal in his dissatisfaction about the depth of his squad and the club's summer business which left him light in midfield.

Only the acquisition of players ready to help Chelsea's assault on Europe would appease the former Italy coach, while the young attacking core at Old Trafford could learn much from a player as experienced as Willian.

“I was happy with my performances last season but it is difficult when the team doesn't go the same way,” Willian said earlier this term. But now it appears the opposite is true.

Chelsea are flying, but their No.22 has been grounded, and with talent like his there is no doubt that he will generate plenty of interest should the Blues opt to part company with him this summer.