“I have no regrets, no way. I am still 100 per cent happy with my decision,” Nathan Aké explained in October 2017, four months after leaving Chelsea for Bournemouth.

“Chelsea were disappointed and wanted to keep me, but they understood as well. They didn’t want to stop me from fulfilling my dreams.”

A year on and Aké is certainly on the road to doing that. He has become a regular in the Netherlands set-up, is impressing in the Premier League on a weekly basis and has been linked with two of the biggest clubs in England; Manchester United and Tottenham Hotspur.

Bournemouth have placed a £40million price tag on the 23-year-old, double the figure they paid Chelsea a little over 12 months ago. But the Blues boxed clever during those negotiations and ensured they had the first option on the Dutch centre-back.

The problem would be that Aké would need convincing that returning to Stamford Bridge, instead of moving to Spurs or United, would be a smart career move.

He spent six years with Chelsea after joining as a 16-year-old but only made nine starts. So history is not on the Blues side.

What would be different this time around? The answer is Maurizio Sarri.

The Italian demands his centre-backs are comfortable on the ball. They play vital roles in not only building attacks but also sustaining them. It's why Antonio Rüdiger (577) and David Luiz (543) have completed the second and third most passes of any Premier League player this term.

Aké, who has on occasion been used in midfield, would be perfectly suited to such a role. He has demonstrated as much at Bournemouth this term as no Cherries player has made more accurate passes (306) than the Dutch star.

His passing accuracy of 89.7 per cent is also higher than any of his teammates and his forward passing percentage of 39.8 per cent is better than both than Luiz (36.9 per cent) and Rüdiger (33 per cent). 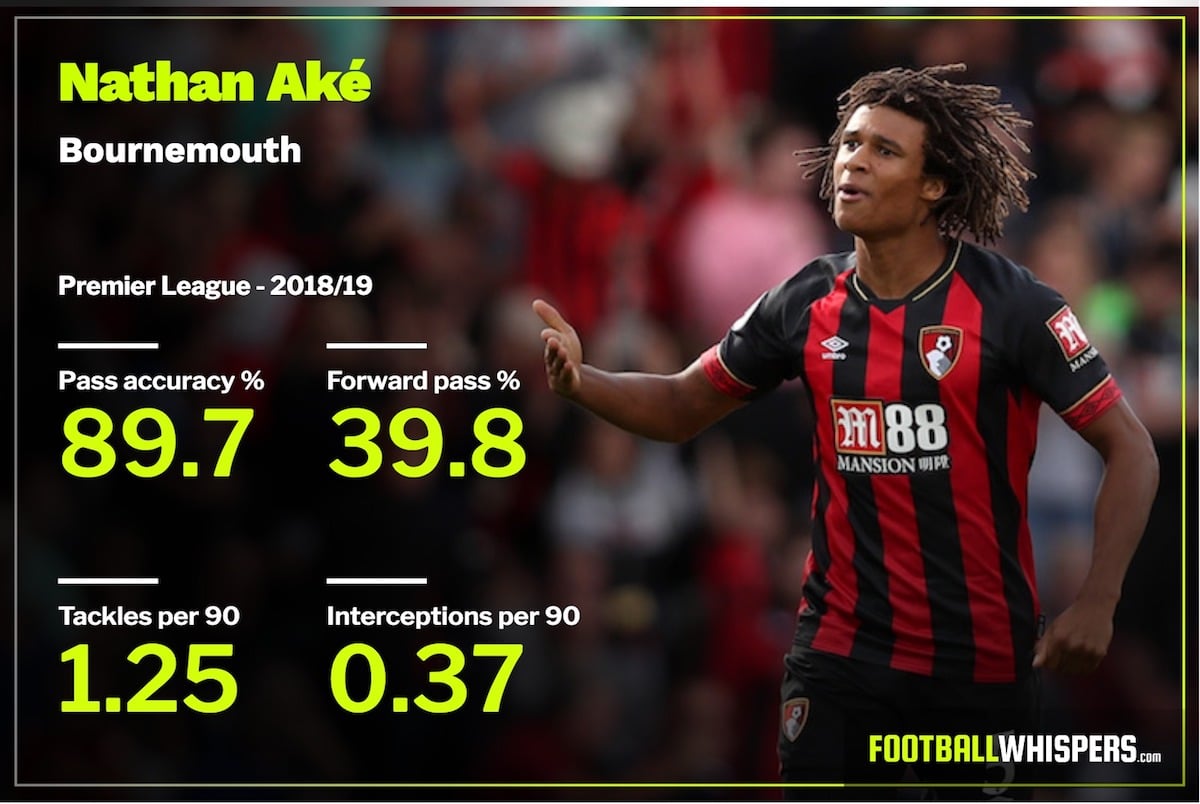 Defensively there is still room for Aké to improve; he often doesn't get enough distance on headed clearances and can take unnecessary risks when in possession.

But his development has been marked since he joined the Cherries permanently. Aké reading of the game is excellent – it's why he doesn't make a huge number of tackles – while his interceptions per 90 is low largely because they masquerade as passes.

Take, for example, the below, taken from Bournemouth's win at Vicarage Road against Watford. 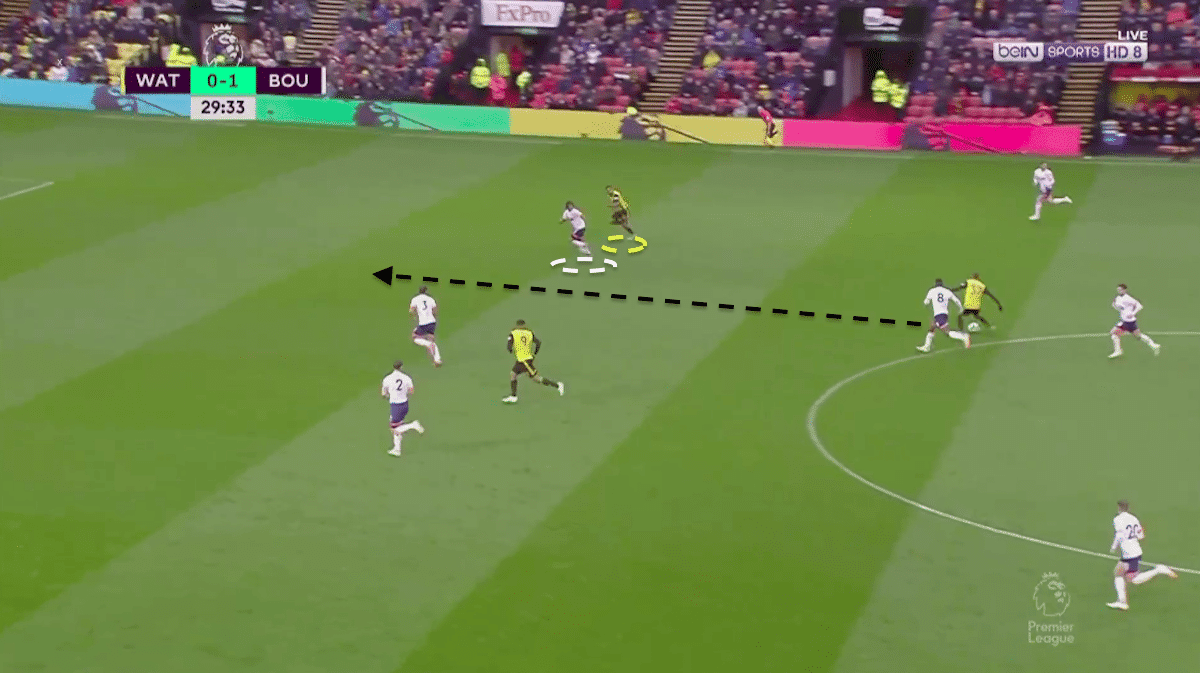 The centre-back is in a tricky position. The quick Andre Gray is on his shoulder and there is no pressure on Roberto Pereyra on the ball. Aké has to get his positioning spot on or the Hornets will be in on goal.

As the Argentine releases his pass, the former Chelsea man quickly steps across to intercept. But instead of simply clearing, he plays a progressive pass to Lewis Cook. 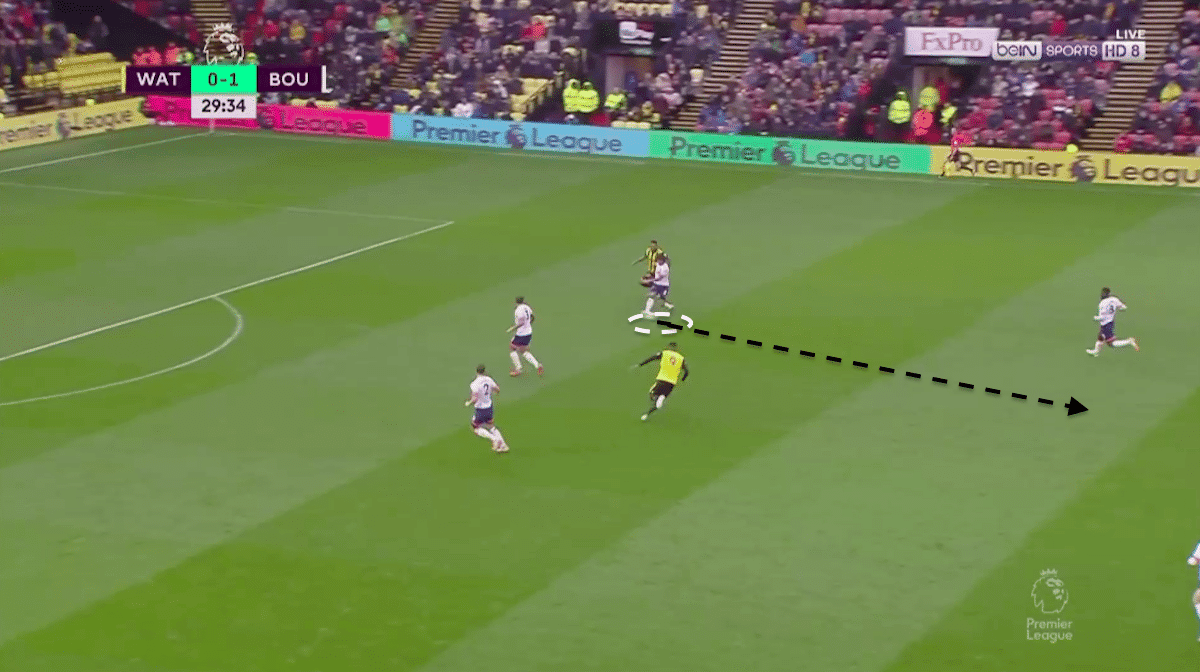 The Bournemouth midfielder comes under pressure but quickly knocks the ball out to full-back Simon Francis.

He has the time to play forward and Bournemouth, thanks to Aké's composure, launch an attack seconds after being in a vulnerable position. 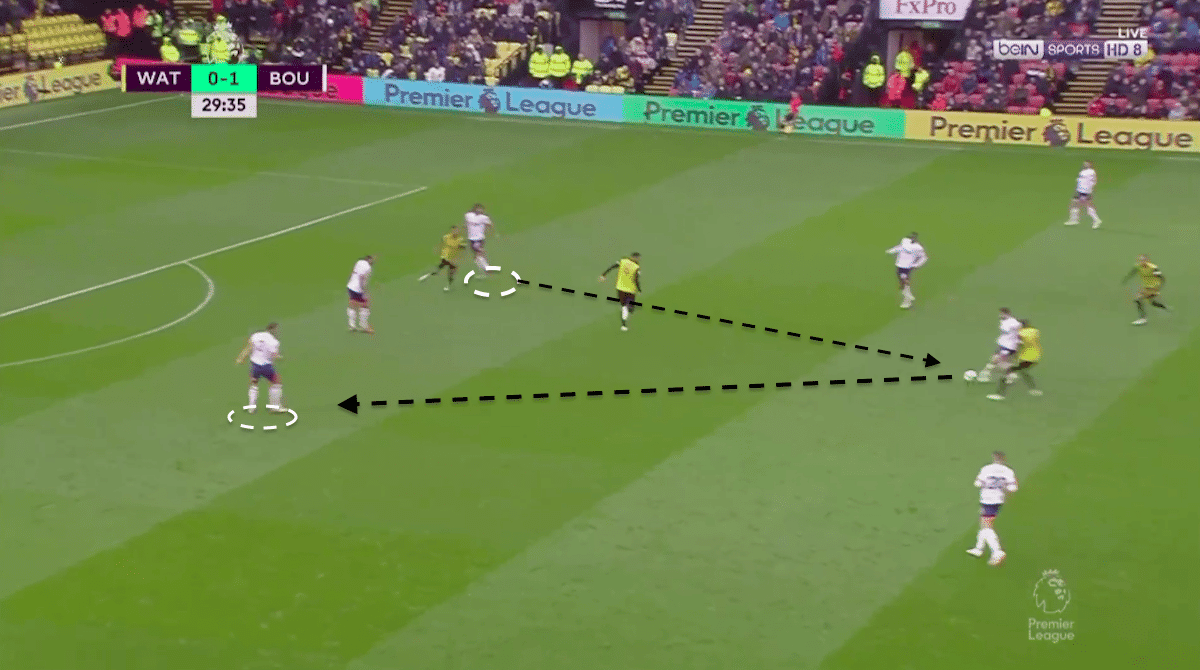 There are several examples of the Dutch defender repeating the above. And that quick-thinking, while a trait possessed by many elite defenders, is one that would be hugely beneficial in an attack-minded side like Sarri's Chelsea or Pochettino's Spurs.

“At the moment I play at Bournemouth and that is going well, so I focus on that,” Aké said this week while on international duty with the Netherlands.

“This [the links to Tottenham and United] does not say much about my status yet. They are rumours on the internet and as long as I do not hear anything myself I will not go into that.”

While these reports may, at this stage, be just speculation it doesn't take long for a club to firm up interest. If Manchester United or Spurs do make a move, Chelsea must act accordingly.

If he was to go to Old Trafford or north London and shine, it would be another bitter pill to swallow given the previous with Kevin De Bruyne, Romelu Lukaku.