Chelsea have a challenge on their hands this summer. Replacing Eden Hazard is a task in itself. Filling the void left by the brilliant Belgian while the club has a transfer ban makes things even trickier. But not impossible.

We’ve discussed in great detail the players who could arrive at Stamford Bridge to replace the No.10 if the Europa League winners are able to sign players. Replacing his 16 Premier League goals and 15 assists if the ban is upheld hasn’t yet been entertained. Until now.

The Blues could replace the majority of those strikes without spending a single penny during this summer. It all hinges on the tactics deployed by Maurizio Sarri.

Last season, the Italian struggled to implement his style. Fans revolted while players literally resisted listening to the former Napoli manager, see Kepa Arrizabalaga for more details. And he wasn’t backed in the transfer market. Not properly.

The club failed to sign a striker. Álvaro Morata wanted out and was eventually loaned to Atlético Madrid. Gonzalo Higuaín wanted in but, at 31, it was always going to be a struggle to adapt to the Premier League from the off and he ended the season with just five goals to his name.

Because of this, there was an overreliance on Hazard. The former Lille man revelled in it. Now he’s gone, Chelsea can piece together a forward line with a much more sustainable output as opposed to a brilliant albeit inconsistent one.

Firstly, Sarri needs to play to the strengths of the forwards he has at his disposal. Olivier Giroud, Tammy Abraham and Michy Batshuayi may appear different on paper but they share a number of similarities.

Giroud netted 11 goals to win the Europa League Golden Boot. Abraham, meanwhile, finished the season with 26 goals as Aston Villa were promoted from the Championship. Batshuayi even bagged five goals in just 757 minutes on loan at Crystal Palace. All could loosely be described as poachers.

They do their best work in the penalty area. Most modern-day forwards have adopted an all-round game which sees them pop up out wide. In some instances, that is a positive. Sometimes, however, you just need someone to put the ball in the back of the net. 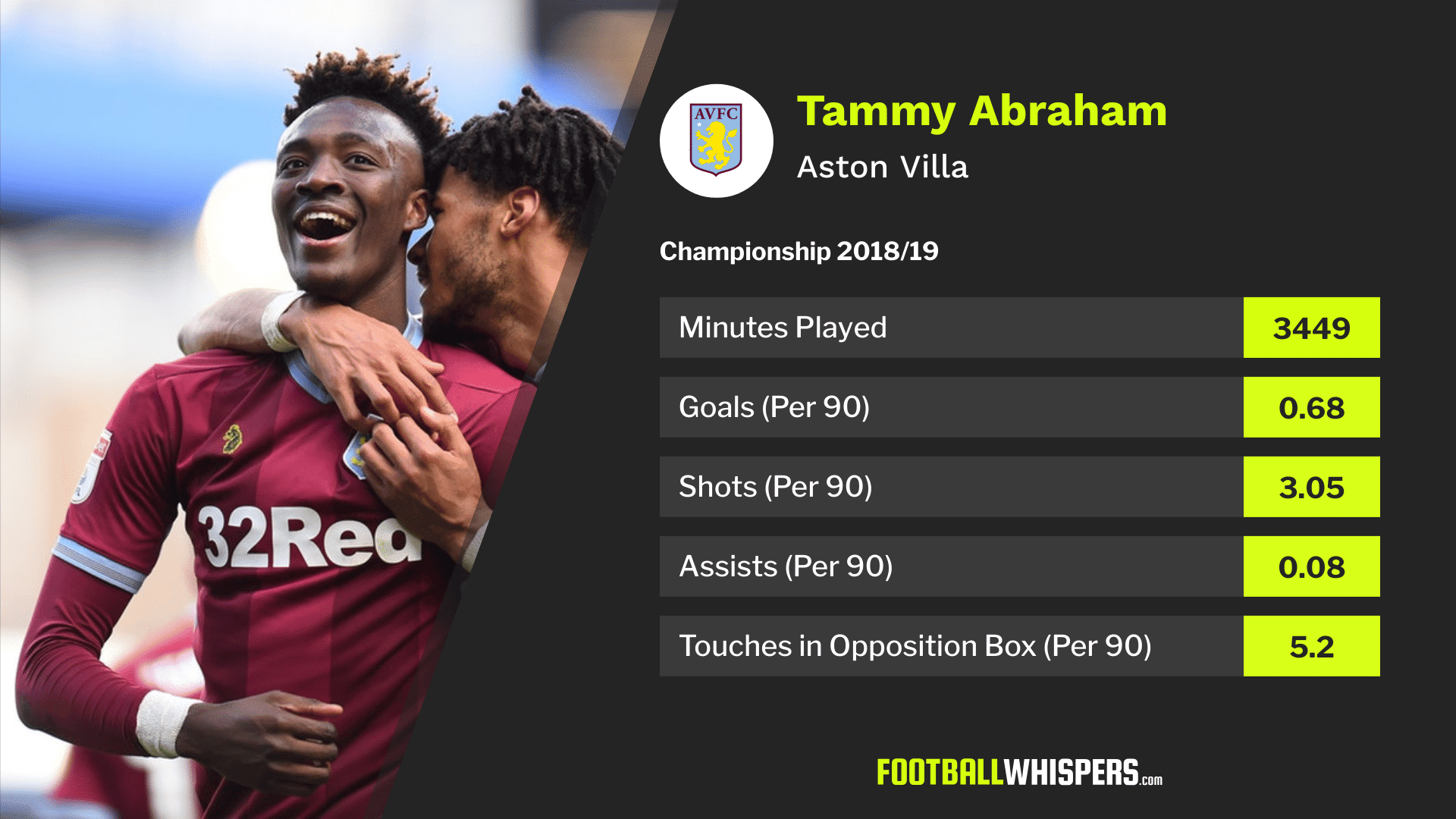 There's a pattern. A trend you can spot when looking at the three potential Chelsea forwards next season. They rely on service, yes, but they're dependable goal threats if serviced correctly. And while similar in many ways, they're different enough to each bring something to the table in order for Sarri to mix it up.

The Blues may have lost one of the best wide forwards in world football but they've also acquired one of the most exciting ones, with Christian Pulisic now calling Stamford Bridge home.

Injuries hampered his 2018/19 season but he still managed to post impressive numbers. The USMNT attacker could be key to Chelsea's forward line getting the service they need. The 20-year-old struck up quite an understanding with Pierre-Emerick Aubameyang at Borussia Dortmund before the forward moved to Arsenal. 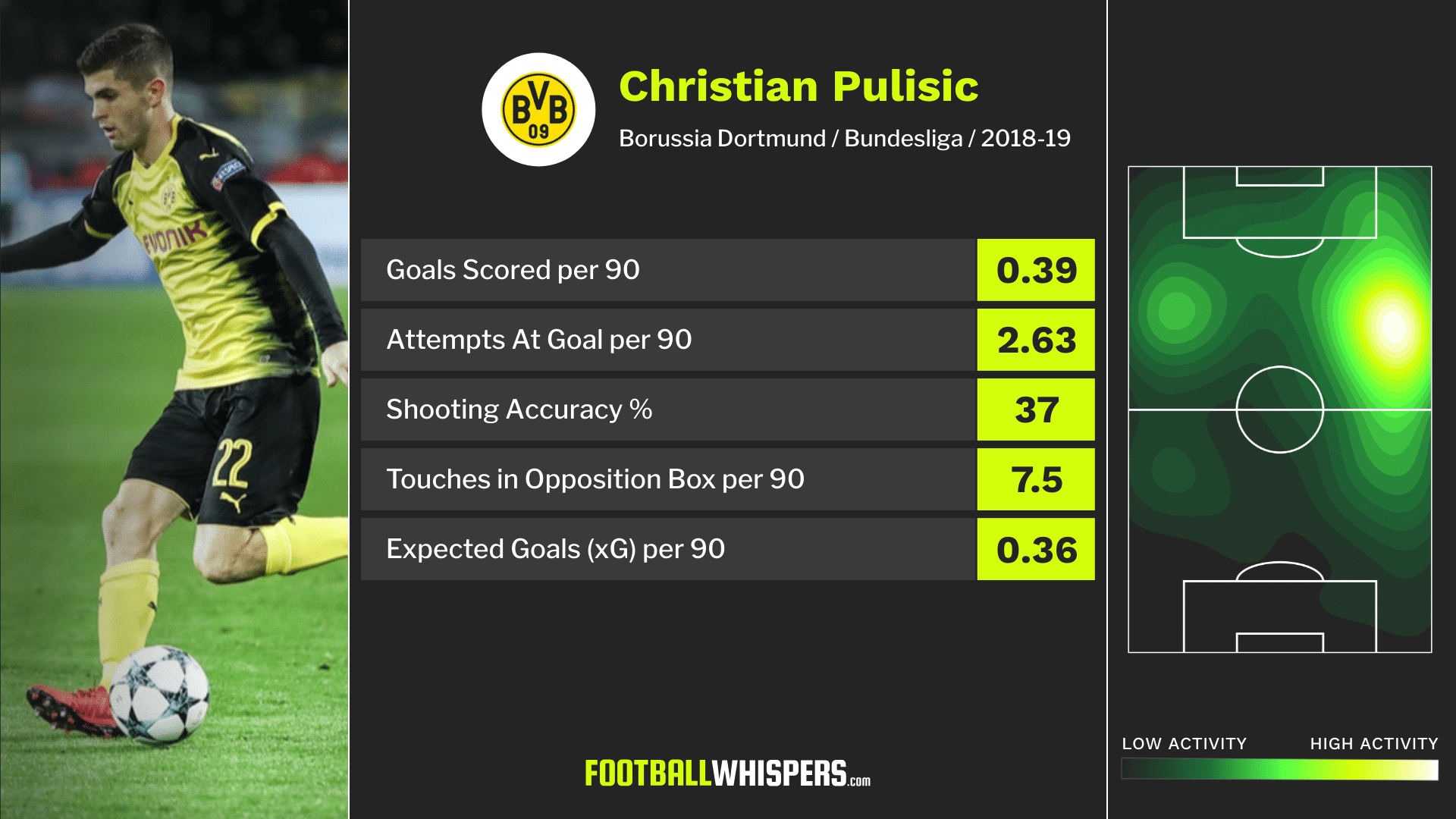 Pulisic would often slalom his way into the area before picking out a pass for the Gabonese speedster to tap home. If he's able to bring that to the fore at Chelsea then Abraham and friends could run riot.

Over a three-season period, Pulisic has created 0.58 Big Chances and he's assisted 1.2 shots on a per 90 basis. Impressive numbers for a teenager in a team often described as being in transition.

He isn't the only one, either. Over the same period, Willian has created 0.3 Big Chances and assisted 1.87 shots while Pedro chipped in with 1.32 shot-assists while creating 0.24 Big Chances. All while playing for different managers in different systems.

If everything is geared towards creating high-quality, repeatable chances, then these numbers could well spike.

If set up properly with a clear vision of what is required from them, there's no reason Abraham and Batshuayi can't surpass the 21 goals Hazard and Higuaín managed last term. With a more complete forward line, with goals throughout, Chelsea could be more dangerous than they were last season.