Every transfer window has its sagas. This summer looked for all the world that it would be Neymar's sensational move to Paris Saint-Germain from Barcelona.

In fact, that was concluded somewhat swiftly and, with the best of a month to go until Deadline Day, it has left the door open for a different deal to be painfully protracted, gripping us, frustrating us and boring us in equal measure.

Step forward Virgil van Dijk, who has voluntarily catapulted himself straight into the centre of a media storm after releasing a statement revealing that he had handed in a transfer request to Southampton.

The 26-year-old Dutchman, a reported Chelsea and Liverpool transfer target, now seems destined to leave St Mary's. Last month, a move to Anfield fell through when Southampton reported the club for an illegal approach. Liverpool apologised and speculation cooled.

However, van Dijk has reiterated his desire to leave, saying he is ‘incredibly ambitious' and wants to play European football, which has opened the door once again, not only to Liverpool but to Premier League champions Chelsea, too.

Will Conte pounce ahead of Klopp?

According to The Daily Telegraph's Matt Law – a reliable source when it comes to Chelsea's transfer dealings – van Dijk was identified as Antonio Conte's top defensive target at the end of last season before the former Celtic centre-half looked destined for an Anfield switch.

Van Dijk's transfer request is likely to reignite Chelsea's interest in the player, though, and with relations between Liverpool and the Saints strained, the Blues may have edged in the race to sign him.

There has been disquiet in the Chelsea camp about a lack of new signings this summer, even with the arrivals of Álvaro Morata, Tiémoué Bakayoko and Antonio Rüdiger for a combined £126 million, and Sunday's disjointed defensive display against Arsenal highlighted the need for further defensive reinforcements.

Van Dijk ticks all the boxes and would be a major statement from Chelsea, a triumphant coup to assuage some of the pain from losing out on Romelu Lukaku.

Although last season was truncated by injury (he only made 21 Premier League appearances), he is still regarded as one of the most effective defenders in English football.

At 6ft4ins, van Dijk is an imposing figure and a player who knows how to utilise his physical prowess to his advantage.

He is physiologically equipped to deal with even the biggest centre-forward, while he is likely to match them both on the ground and in the air.

In the 2015/16 season van Dijk won more aerial duels than any other player in the league. Although he struggled with fitness last season, van Dijk's 75 per cent of aerial duels won still comfortably eclipsed that of Gary Cahill, David Luiz, Cesar Azpilicueta and Rüdiger.

With Conte likely to deploy three centre-halves once more in either a 3-4-1-2 or a 3-4-3, van Dijk's athleticism, pace and ability would be valued assets as the club look to not only defend their league crown but re-establish themselves as a force in the Champions League.

What makes van Dijk so attractive to the top clubs, however, isn't just his towering frame – it's his impressive reading of the game. Van Dijk averaged a hugely impressive 2.72 interceptions per game last season, 0.68 blocks and 6.8 clearances.

He knows where to be, either in the box or when defending in a high-line, and that helps him stay one step ahead of the striker.

Dating back to his time at Celtic, van Dijk declared himself a ball-playing centre-half. “I’m a strong defender and I’m good in the air, but I also like to play football on the ground,” he said after joining the Scottish side in 2013. That statement encapsulates why

That statement explains why Conte is interested in van Dijk. A perfectly efficient penalty box defender he may be, but the Dutchman possesses that ability to recognise space in front of him and carry the ball forward, thus helping the team shift seamlessly from a defensive to an attacking phase.

Combine that with composure in possession and the vision to execute an incisive pass and van Dijk is looking better and better.

Like van Dijk, Cahill and Luiz are both adept at ball-carrying and possess an impressive range of passing, so it's understandable that Conte would want to bolster his back-line with a player that will compliment their own strengths and help cover their weaknesses (Cahill's pace, Luiz's aerial duels).

Of course, while it's precipitous for one to suggest that van Dijk is a player without flaws, he has never made an error that has directly led to a goal, according to the Premier League's website – and there aren't a lot of defenders that can say that.

Fitness may be the sole worry

The potential risk to signing van Dijk – especially if Southampton get the £75million they are reportedly demanding – is his fitness. He hasn't played since January, which means it may take some time before he gets back to full match sharpness and prime condition. 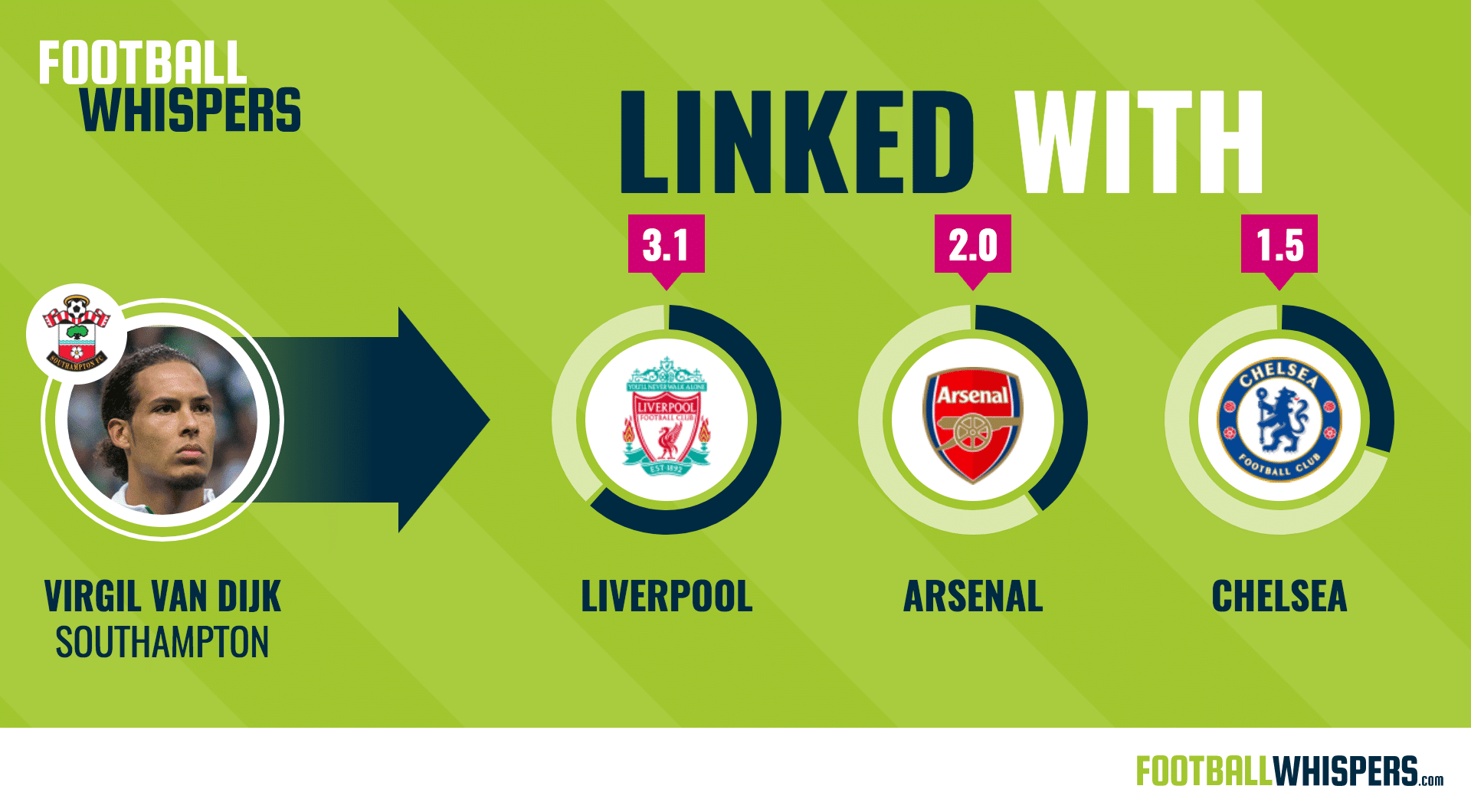 With that in mind, Conte may look to integrate him into the first-team squad gradually, but he can afford to do so with Cahill, Luiz, Rüdiger to call upon.

The timing may not be a coincidence, either. A day after Chelsea's need for reinforcements was exposed by Arsenal, van Dijk issued a ‘come and get me plea' to teams who can offer the chance to win major honours and play European football. Chelsea can, of course, offer both.

With the Manchester clubs strengthening their squads enormously in recent weeks, Conte is wary that retaining the Premier League will be a tall order, especially while his players negotiate a more gruelling schedule that includes Champions League football.