Chelsea and Arsenal are fighting over the same defensive target according to reports in England and Germany. Borussia Dortmund’s Greek defender, Sokratis Papastathopoulos, expressed his frustration after BVB failed to lift the Bundesliga trophy and now both London clubs are interested in his signature.

“I want to play until I'm 33 or 34,” Sokratis told WAZ.de, via Yahoo. “But I have not thought about whether this will be here or elsewhere. After the end of the season there is enough time to think about the future.”

The 29-year-old joined the Ruhr club in 2013 from Werder Bremen, but in those four years, he has failed to lift the league trophy.

“There is something I have been missing. If you are young, you have a lot of time to get something. But I'm no longer young, I've got a lot of time for myself – and I really want to win a title.”

Dortmund did finish in the Champions League places, needing to win on the final day, they would then beat Frankfurt in the DFB-Pokal final, at least lifting some silverware.

Both Chelsea and Arsenal have apparently put out feelers regarding his intentions.

“It is too early to talk about the new season,” he continued. “In the summer, so much can happen, players go, players come.”

The Greece international signed a new contract in 2015, keeping him at the club until 2019, so Dortmund will be in no rush to sell, although this summer would be the last time they are in a position of power to make sure they get the best deal.

Sokratis would cost either side around £25-30million in the current market, which represents good value with the way fees have jumped up over the past 12 months.

What does Sokratis bring?

Standing just over 6 foot tall and weighing 82 kilograms, Sokratis is a big, strong, powerful defenders and he shows that in his style. Uncompromising in the tackle, he loves to go to ground and slide in to clear the danger.

What Chelsea and Arsenal will be looking for in a centre-back, is someone who is comfortable in both a back-four and back three, and that’s perfect for the former Milan defender.

Although he is stocky, he is quick along the ground and more than capable of chasing out wide and closing down attackers on the flanks.

The Greek wins 2.3 tackles per 90 minutes, and although it is not always great to have your centre-back attempting so many, when you play in a back three, it’s little different as you need to perform similar duties to that of a full-back.

Aerially, he is fairly dominant, despite not being much taller than 6 foot. Winning 69 per cent of his battles, he is a force to be reckoned with when the ball is in the air. 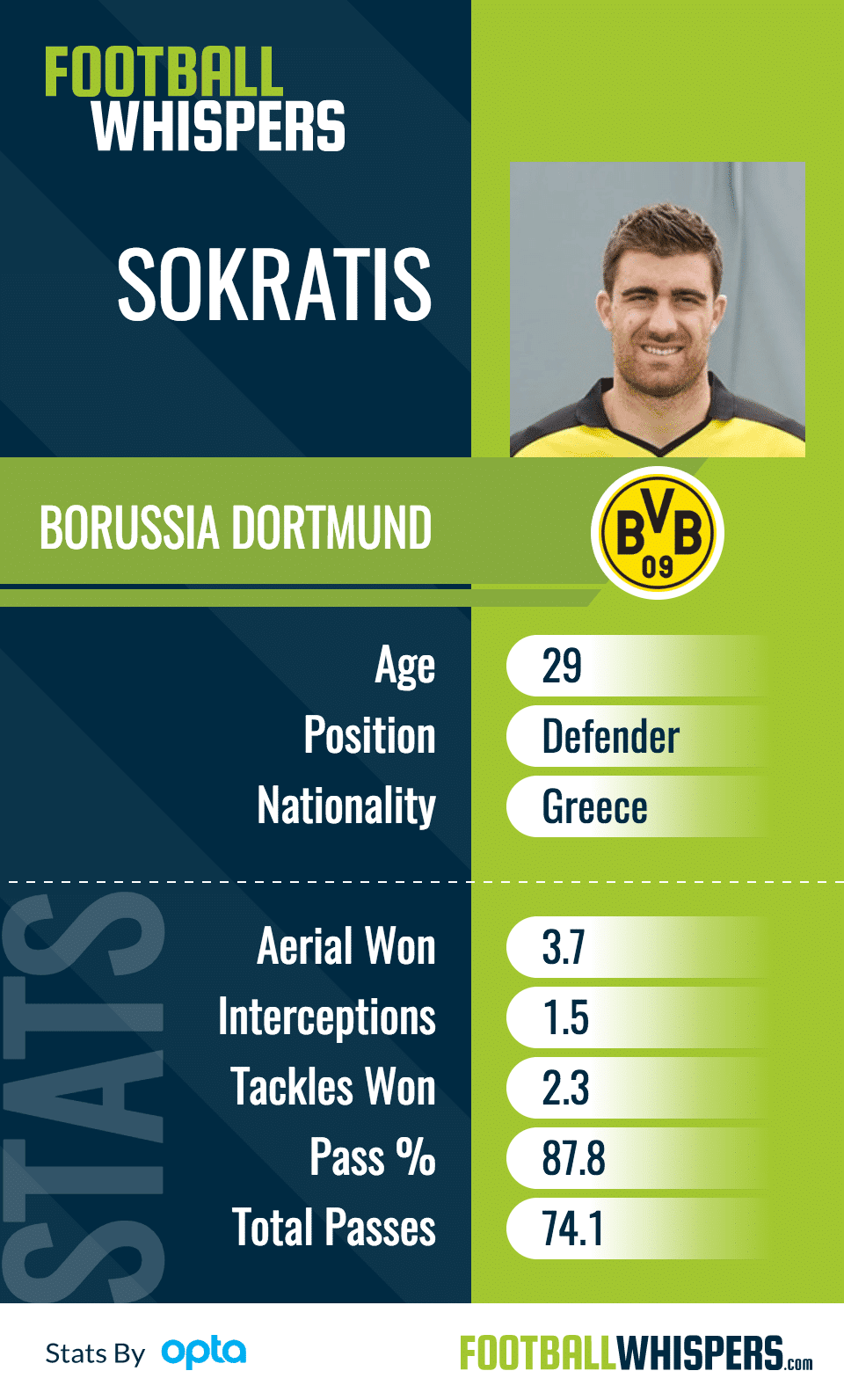 Very comfortable with the ball at his feet, he makes more passes per 90 then the other defenders we measured him against.

Sokratis has also shown great vision and can hit on-running wingers with deadly long balls. The Dortmund man edged David Luiz in terms of long balls attempted and how many met their mark.

Against Frankfurt in the league, earlier in the season, he showed what he was fully capable of with the ball at his feet.

Due to his power, he can spring out of the defence, looking to create in the final third. Advancing up the pitch, he cut inside and caught a glimpse of goal, smashing a wonderful shot into the top corner.

Where does he need to improve?

What comes across very quickly is Sokratis’ passion to recover the ball when mistakes are made. Sometimes it can be a huge positive, like when he mis-judged a header in the away leg against Monaco.

The ball skimmed the top of his head and new Manchester City signing Bernardo Silva was on to it in a flash. 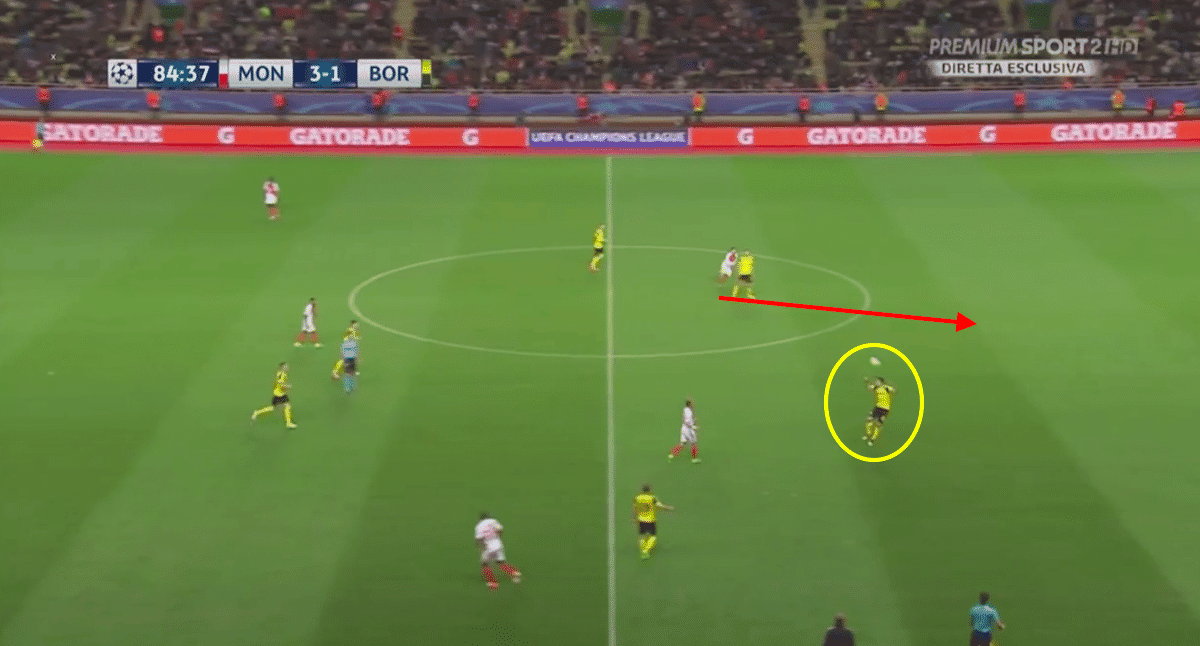 The little Portuguese forward was through on goal, but the Greek defender powered back, doing everything within himself to get back. He got close enough to launch himself at the ball, doing enough to clear the danger. 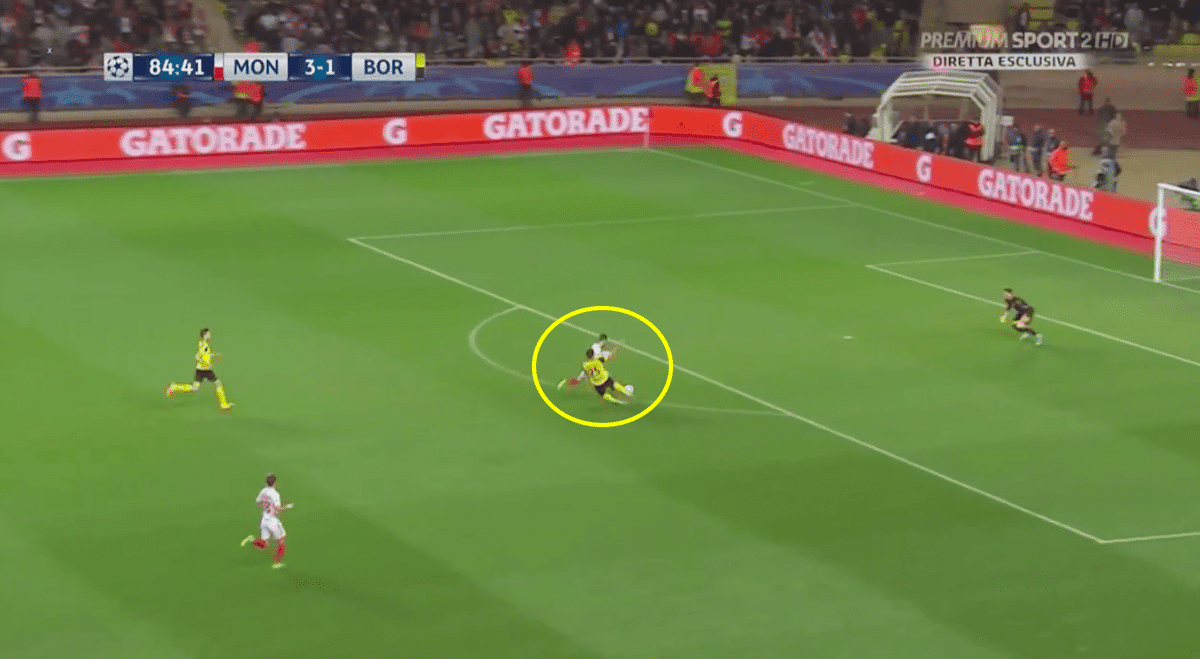 Although it was his fault the chance was made, he wasn’t about to sit back and let Bernardo have a clear road to goal.

At times, he can be too aggressive, a little too enthusiastic and it leads to mistakes and fouls, but the same was said about David Luiz, and Antonio Conte has transformed him into one of the best in the Premier League.

Due to his ability to hit long passes, he can dawdle on the ball. That can either lead to a poor decision in who he tries to pick out, or spending too much time in possession.

Rather than stay on his feet and look to push back the attack with his impressive size, he does rush in more than he should. Luckily, a lot of the time he wins the tackle, but against better opponents, he can get caught out.

Arsenal or Chelsea: Where suits most?

At Stamford Bridge, you know he’s going to play in a back three. Antonio Conte knows that system as well as anyone and it's responsible for the turnaround at Stamford Bridge last season. Sokratis is no stranger to this having played it under Thomas Tuchel.

The former Dortmund manager was forever tinkering with his system but he did stick with the 3-4-3 system for a period and the defender looked comfortable playing there.

Arsenal finished the season using a three at the back system but it's not one Arséne Wenger has used during his managerial career. He simply adapted it to survive. However, if the Frenchman wants to stick with it then signing Sokratis would go a long way to making it a lot more functional.

Similairly, if Arsenal switched back to a more traditional 4-2-3-1 system the Greek defender would be a solid partner for either one of Laurent Koscielny or Shkodran Mustafi.

Would the Dortmund defender be a welcomed addition at your club?