Chelsea exhibited a performance of champions to put Arsenal to the sword in dominant 3-1 victory over their title rivals at Stamford Bridge. Goals from Marcos Alonso, Eden Hazard and former Gunner Cesc Fabregas all got on the scoresheet to send the Blues 12 points clear at the top of the Premier League and ultimately send Arsenal crashing out of the title race.

Although this article is meant to outline the things we learnt about these two side, it just feels like the same old story for the Gunners. After losing 2-1 to Watford at the Emirates in midweek, Arsenal were bullied out of another big game and look set to miss out again while Chelsea stroll towards the Premier League title for the second time in three seasons.

But what did we learn at Stamford Bridge?

3-4-3 formation brings the best out of Hazard 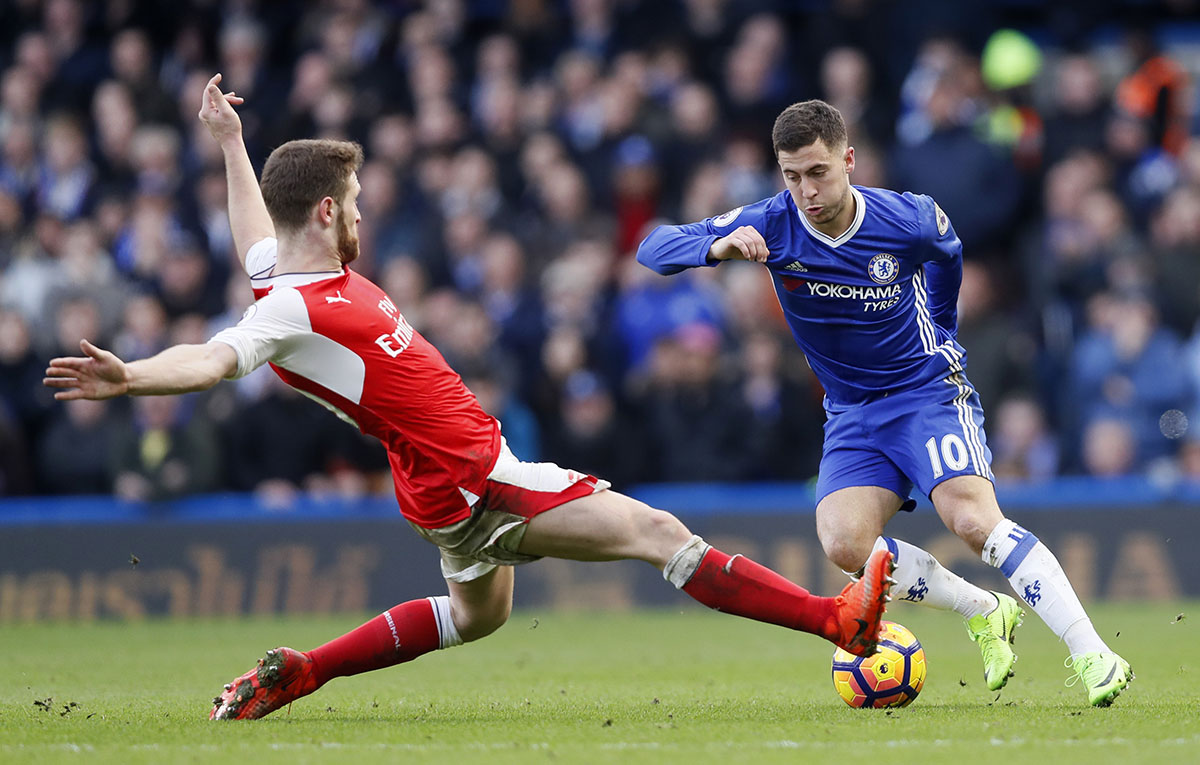 If you hadn't already noticed, the Belgium international is having the season of this life. Hazard put in a magical performance at Stamford Bridge and the Arsenal defence will be the first to admit that they couldn't get near him. And his goal, which saw him beat four or five Arsenal players before slotting past Petr Cech, will go down as one of the best goals this fixture has ever seen.

But what has changed for Hazard this season that has allowed him to play in this manner?

Chelsea have evolved tactically under Antonio Conte and the 3-4-3 system that the Italian has deployed for much of the season gets the best out of Hazard. The flying winger is an outstanding player and would probably be difficult to keep quiet if he was playing at full-back, but, his position makes him almost impossible to mark and gives the Belgian free reign to roam around and cause problems.

Opponents don't know who should be marking him and that causes mass confusion. Seeing Hazard play slightly more centrally also allows him to play in between the lines and drive at defences in dangerous areas. Additionally, having the likes of N'Golo Kante and Nemanja Matic in midfield to cover him down the left flank frees him of most defensive responsibilities.

Cesar Azpilicueta is Chelsea's Player of the Season

Although, Eden Hazard and Diego Costa will gain most of the plaudits for helping Chelsea run away with the title this season, their most consistent performer has been Cesar Azpilicueta. Azpilicueta took on the challenge of reinventing himself as Chelsea's third centre half under Conte and the Spaniard has been absolutely exceptional.

The 27-year-old has successfully converted himself from an attacking full-back into a reliable centre back and, in all honesty, he looks like he's been playing there his whole career. Not only is Azpilicueta able to give Victor Moses adequate cover when he bombs forward, he also reads the game well enough to support David Luiz whenever he tends to lose his positional sense.

Today's game was the biggest example of his improvement. Azpilicueta absolutely hounded Alexis Sanchez from start to finish and arguably prompted the Chilean to have his worst game in an Arsenal shirt. Not many defenders in world football could've closed Sanchez out of a game like that and the Gunners forward simply couldn't move without Azpilicueta breathing down his neck.

So, although, Hazard will rightly take the praise for today's victory, Azpilicueta was just as important. 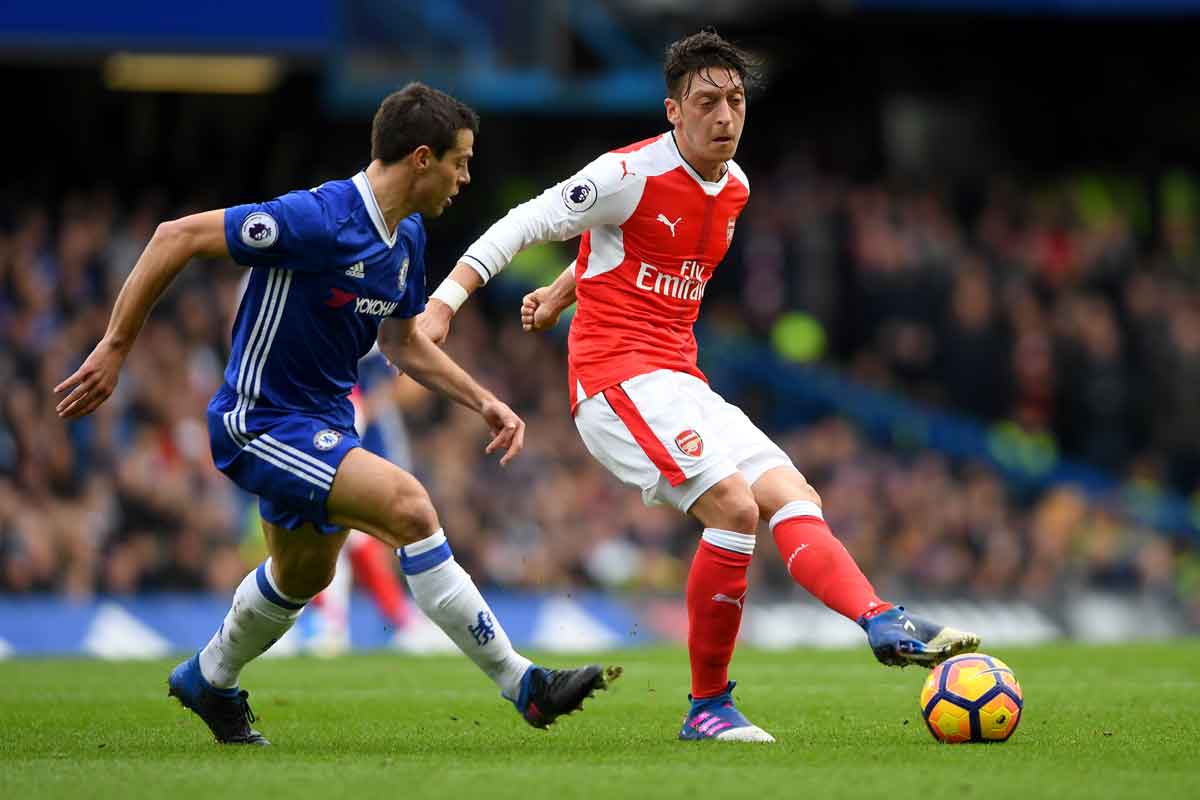 Where was Mesut Ozil?

How do you solve a problem like Mesut Ozil? Arsene Wenger certainly doesn't know how. Once again, rather predictably, the Germany international went missing on the big stage when his team needed him most. Now, there's no doubt that Ozil wasn't the only Arsenal player that struggled to cover themselves in glory at Stamford Bridge but the tricky playmaker has an incredible knack of fluffing his lines when his team need him the most.

Big teams look for big players in big games. Apart from in the reverse fixture when Arsenal humbled Chelsea at the Emirates, Ozil just hasn't delivered. Let's not forget that that Chelsea team were a stark contrast from the side that turned up today too. Ozil was ponderous on the ball and looked fragile every time Chelsea's aggressive midfield got anywhere near him.

If Arsenal are to take that next step towards major silverware, the German will need to become a bigger influence in title-deciding games. 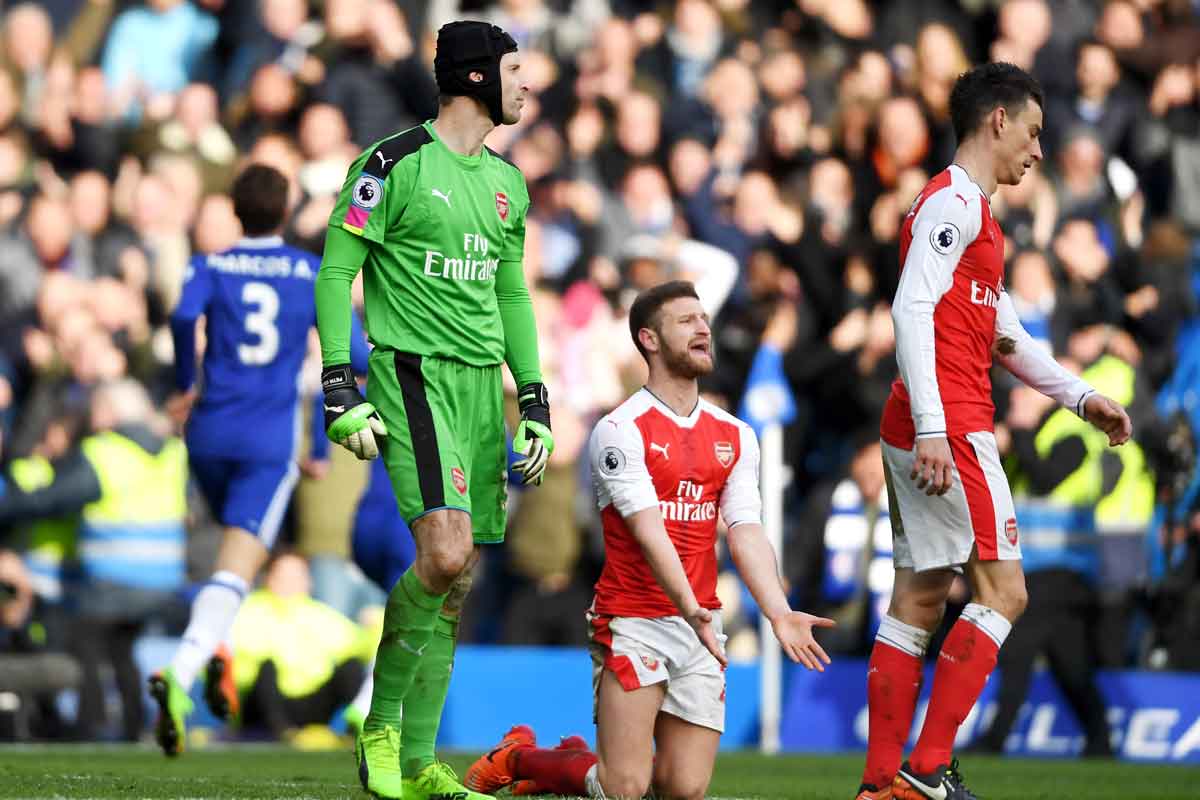 When the Frenchman arrived in English football, his record in the transfer window was exemplary. Without fail Wenger would continuously find these rough diamonds and convert them into world class players. However, even though he still seems to have that affect with forward thinking recruits, defensively speaking, Arsenal always seem to come up short.

At the very top level, Francis Coquelin was absolutely outclassed and humbled in the midfield battle by Matic and Kante this afternoon which allowed Chelsea to roam forward and pile pressure on the erratic Arsenal back four. At one stage, Arsenal had youngsters Alex Iwobi and Alex Oxlade-Chamberlain playing out of position in central midfield against the two aforementioned Chelsea players. This outlines the difference between the two teams.

Chelsea have strong, ruthless and experienced players that know how to nullify the opposition and win tough games. Arsenal simply don't. And they've needed the same players to push on for a number of years but Wenger doesn't seem to be able find them.

Yep, that's it. Although we all wish the title race would be a bit more exciting and go down to the wire, after today's win, they may as well start etching Chelsea's name on the Premier League trophy now. But don't they just deserve it. And, the Blues performance at Stamford Bridge perfectly showed just how good they've been.

Tactically, Conte got it right and his hugely praised tactical nous has seen the Blues come out on top in another big title decider. Chelsea's back three learnt from their mistakes at the Emirates and gobbled up one of the best attacking sides in the country in Arsenal with ease. The midfield worked tirelessly and bullied Arsenal out of the game which just left the rest down to their world class frontline who are the envy of their Premier League rivals.

After a tricky start to the season, Conte galvanised his squad and created a style of play that launched Chelsea into the title ascendancy. If they keep this sort of form going, they could finish with the biggest points advantage in Premier League history.