Chelsea and Barcelona played out an entertaining 1-1 draw at Stamford Bridge in a result which means there's everything to play for in the return leg in a fortnight's time.

The away side started brightly with Lionel Messi looking at his brilliant best but it was Chelsea who should've went into the break with a 1-0 lead. Willian struck both posts with Marc-André ter Stegen well beaten.

The Brazilian eventually put the home side ahead when he expertly guided the ball past the German ‘keeper from the edge of the area. It was a deserved goal and Barcelona looked bereft of ideas. Their sterile possession in the middle third played into the hands of Antonio Conte's men and Chelsea looked dangerous on the break.

But the home side couldn't hold on. A mix-up in defence gifted Barcelona with a glorious chance and Messi made the most of it to give Ernesto Valverde‘s men a crucial away goal to take back to the Nou Camp.

A draw was a fair result in the end. Here are five things we learned from what was a fascinating tactical battle between Valverde and Conte.

Conte is one of the best tactical coaches in the game today. However, one criticism often levelled at him is the fact he’s dogmatic. He knows what he wants from his team and, even when things are going his way, he’s reluctant to change it up.

The Premier League champions go into games against expressive opposition looking to absorb pressure and hit them on the break. It’s just what they do.

But against Barcelona it was different. Conte opted to have Eden Hazard start as a false No.9 with Willian and Pedro flanking him. On paper it’s an ideal trio to hit teams on the counter but this wasn’t the plan. Instead Chelsea use their pace and energy to press the La Liga side high up the pitch in a way you’d usually associate with the likes of Liverpool and Manchester City. 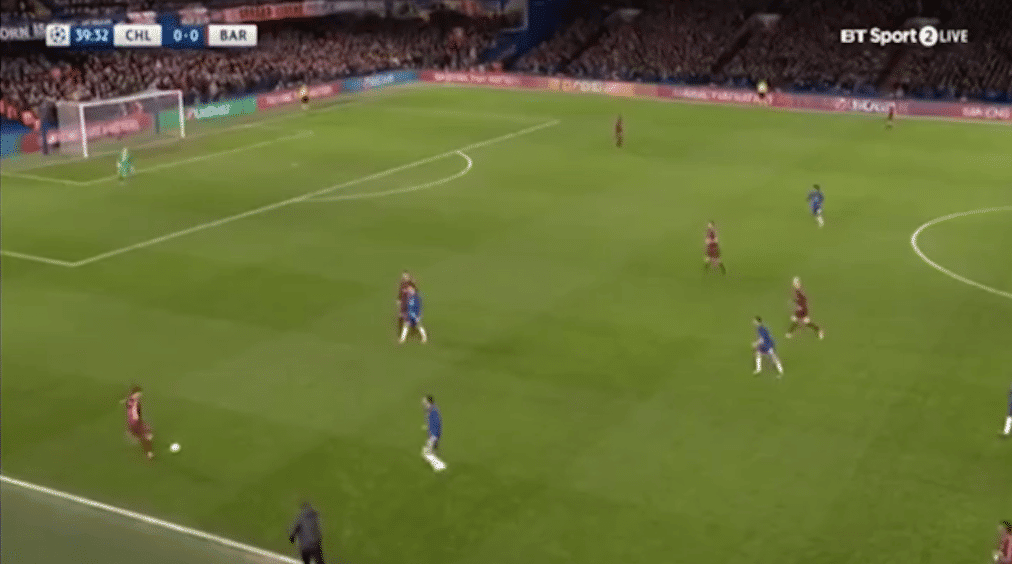 You can see it in the picture above. Marcos Alonso has pushed up from left wing-back to front up Sergi Roberto. Hazard is keeping tabs on Gerard Piqué, Pedro is closing the passing angle to Ivan Rakitic and Willian is looking to get close to Sergio Busquets.

The Catalan side are experts at playing through a press but at times it did impact their rhythm and Chelsea were able to win the ball back and attack Barcelona during transition. It was nice to see Chelsea being so aggressive as opposed to passive.

As soon as it became clear that Chelsea wanted to put Barcelona under pressure then the decision to start Hazard instead of Olivier Giroud and Àlvaro Morata made a lot of sense.

For the majority of the season, the La Liga champions-elect have played a 4-4-2 diamond system. Many expected them to play that way at Stamford Bridge but Valverde instead went with more of a 4-2-3-1 system.

Rakitic and Busquets sat a little deeper with Andrés Iniesta operating on the left and Paulinho playing on the right. This allowed Messi the freedom to play behind Luis Suárez.

On one hand you could look at it as though Barcelona just wanted to give Messi solid foundations to do what he does best but on the other you could argue that Valverde had to adapt his system to combat Chelsea's direct forward line.

Conte's decision to play Hazard in a central role proved to be a good move. The Belgian is a master of isolating the opposition and then dribbling past them. Putting another body in a defensive role just shores things up a little more and makes it harder for the Chelsea No.10 to dance his way past the away side.

The Chelsea front three completed 15 dribbles in the match, five more than Messi and Suárez.

Hazard has a future leading the line

Eyebrows were raised when Conte named Hazard as his striker for the match. The former Juventus manager is a fan of target men and spent the best part of £90million on Morata and Giroud. He was reluctant to use Michy Batshuayi when the Belgian was at the club despite his knack of scoring goals.

So, with all of this in mind, why was he putting so much faith in his No.10 operating as a false No.9? He'd played that role previously but it was when he didn't have Giroud at his disposal. It was a risky move and it could've easily backfired if Barcelona managed to pin Chelsea meaning the home side had no out ball.

That didn't happen though. Instead Chelsea showed attacking intent and, lead by Hazard, really got at Barcelona. Willian was the one causing the away side a lot of problems but it was Hazard pulling the strings and popping up in dangerous areas. The Belgian continuously created space for teammates and executed his role in the team perfectly.

There's no reason the 27-year-old couldn't transition from attacking midfielder into a striker moving forward and take his game to a whole other level. Others, who weren't as talented or as direct as Hazard, have done it.

Barcelona dominated the ball and narrative will have you believe they put Chelsea under a lot of pressure. But that wasn't the case. The Spanish side did dictate the game with their use of the ball but it was Chelsea who dictated the space. They allowed Barcelona to have the ball in certain areas but there was a bit of a force field around their penalty area. 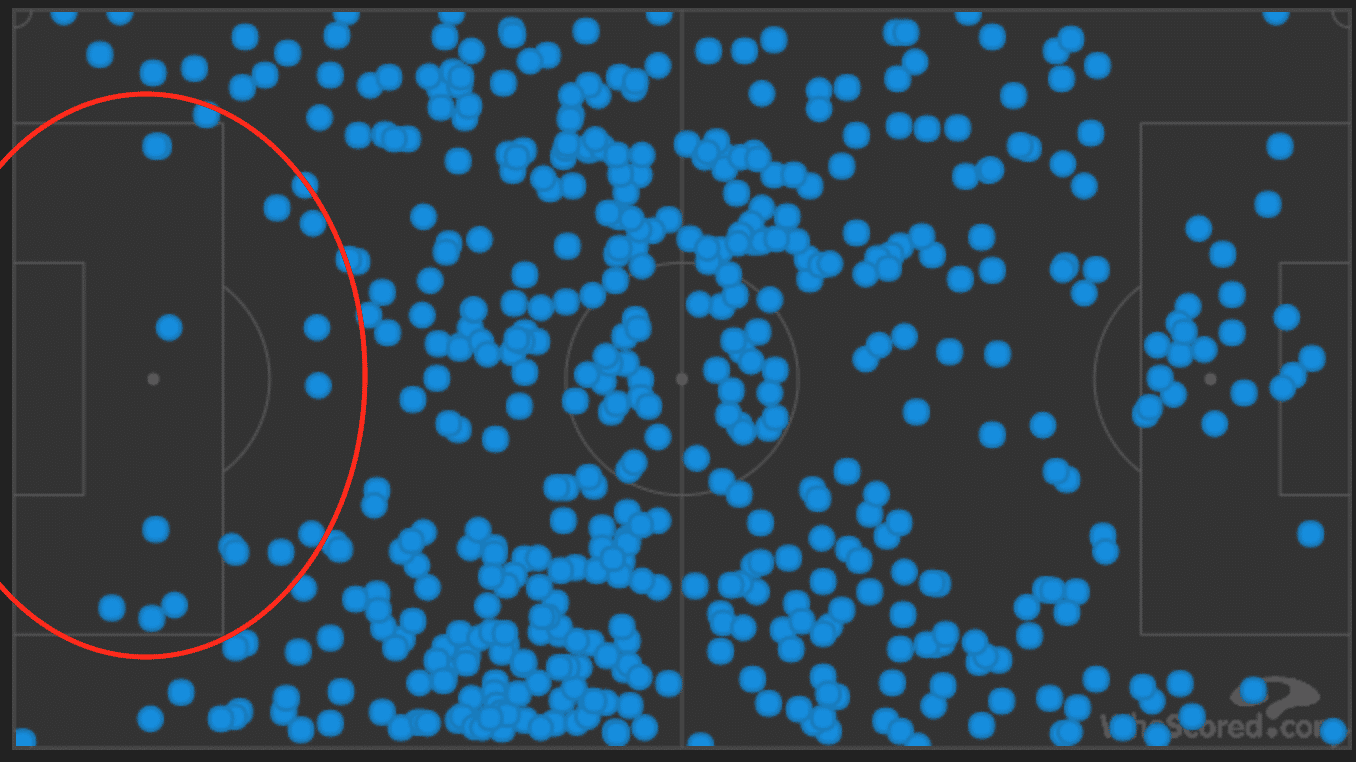 The touch map above, taken from the first-half, showed where Barcelona players had possession. As you can see by the red circled, the away side didn't manage many touches in the penalty area despite their dominance.

They had plenty of touches in the Chelsea half but struggled to really stretch Conte's defence. They're not the first team to struggle to do that and they won't be the last. But with Messi pulling the strings and the likes of Iniesta and Rakitic seeing a lot of the ball, you expected better. However, the Chelsea team did well to restrict Barcelona for the most part.

In eight matches against Chelsea prior to tonight Messi had failed to find the back of the net. Believe it or not, there are people who use that stat as a stick to beat the Barcelona legend with. People will ignore the records he's broken, the trophies he won and the goals he's scored because he wasn't able to score against Chelsea.

He righted that wrong tonight. All he needed was a half-chance, because that's what his goal was. There was a mix-up in the Chelsea defence and Iniesta selflessly passed the ball to Messi. The Barcelona No.10 made his emphatic finish look ridiculously easy when it was far from it.

With that strike he dispelled the myth that he couldn't do a job against Premier League sides in knockout football. But even without the goal to his name, it was clear that Messi was going to be the man to make something happen for Valverde's men. He was barrelling his way through the Chelsea defence in a way not usually associated with him and he was showing the odd moments of guile to open up the Blues' backline. Chelsea tried but ultimately fell short in their attempts to nullify Messi.