It was a little over four years ago that an 18-year-old Che Adams was plying his trade for Ilkeston FC in the Evo-Stik Premier Division. At the time, despite interest from several professional clubs, the teenage striker had one aim: staying in the team.

“I just want to play football and keep working hard for Ilkeston,” he told the town's local paper in November 2014. “That’s the way I’ve always been, and whatever will happen in the future will happen. Your place isn’t safe at any club if you don’t work hard to keep it.”

Adams didn't have to wait too long for his big break. He joined Sheffield United, then in League One, only two days after that interview was published and 18 months later would move to Championship side Birmingham City, his current club.

It took Adams two seasons to adapt to the second tier of English football. Given his rapid rise – and tendency to be used as an impact substitute – that was hardly a major surprise. This term, though, he's established himself as a regular starter and as one of the best strikers outside of the Premier League.

He's scored 19 league goals this season, nine of which have come in his last eleven matches, and has attracted interest from English giants Manchester United and Arsenal.

“Che is one of those players that comes along every so often and makes you think, ‘wow’,” Kevin Wilson, his old Ilkeston manager, told the Stoke Sentinal in December. “He has a knack of doing things in games that make you stand up and take notice.”

Adams list of suitors grows by the week. Celtic have also scouted the striker while Tottenham Hotspur, Leicester City Watford, Burnley, Southampton and Wolverhampton Wanderers are keen, too.

This can be, partly, put down to Jamie Vardy. Since the Leicester City star rose from non-league nobody to Premier League title winner, many clubs have intensified their scouting of the Football League and at grass-roots level. They are all searching for their own diamond in the rough. The rags to riches story. The unexpected hero.

Adams certainly fits the bill. He was released by Coventry City at 14 and wasn't picked up by another club. So he joined local side St Andrews and then moved on to Oadby Town, for whom he represented as a 16-year-old.

A successful trial with Ilkeston followed and from there… well we know what happened. The big question is what's next? Birmingham have, reportedly, placed a £22million price tag on Adams, a significant fee for a player with only one strong campaign behind him.

So is he worth the risk? 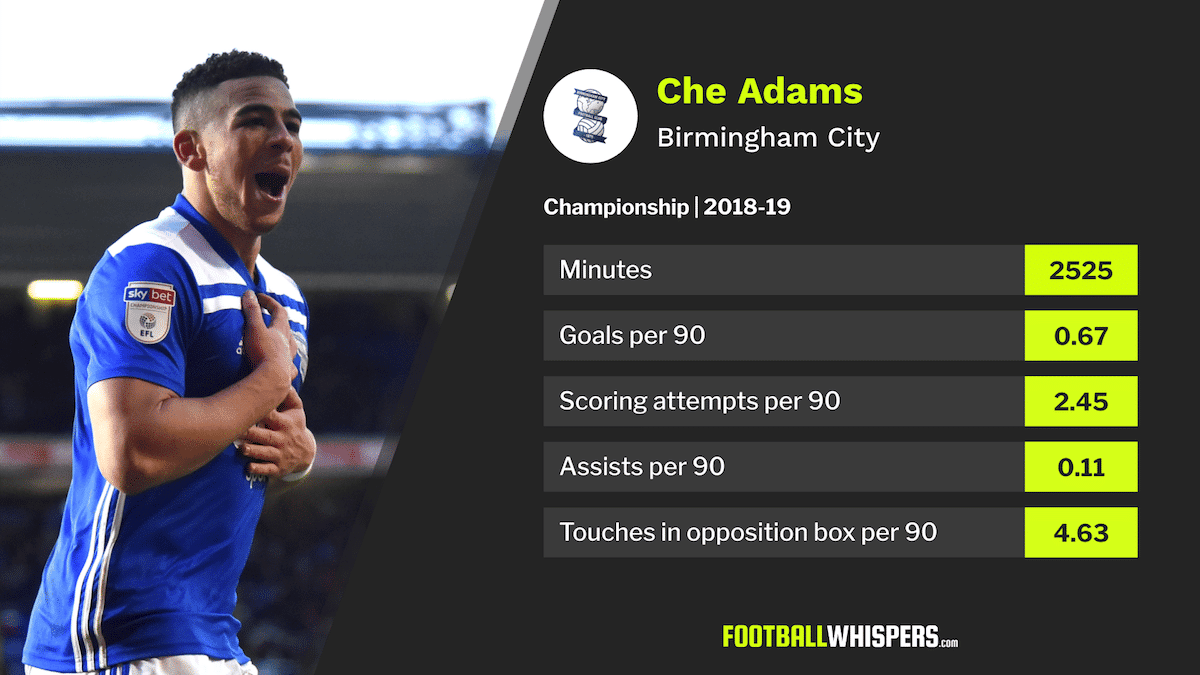 What is evident from the stats, and from watching Adams, is he is a well-rounded forward – which is likely to be because he has also been utilised out wide and as a second striker in his career.

Being stationed away from goal forces attackers to adapt. They tend to learn, appreciate and then develop the creative side of the game. That, in turn, makes them a multifaceted threat when they return to the frontline.

Adams showcases this excellently. No Championship forward has played more open play key passes (38) than the 22-year-old this term. He is also within the top twenty for successful take-ons, accurate through balls and accurate pull-backs.

This ability to link play is vital for modern strikers, especially those who harbour ambitions of one day thriving in the Premier League. Yet their goal threat must not be blunted, a match-winner they must remain.

Adams is just that. His open play goals per 90 this term (0.57) is the third highest figure among Championship forwards. However, it's more impressive when you consider his scoring attempts per 90 (2.45) is bettered by 31 other players.

Adams believes two factors have been important in his improved decisiveness in the final third.

The first is Southampton and Everton striker James Beattie, who joined the coaching staff at St Andrew's last summer.

“Since James has come in [as assistant manager] he has been amazing,” Adams told the Birmingham Mail. “He was a top, top striker and is helping all the attacking players with movement, patterns of play and what to do.”

The second is the fitness regime Garry Monk has implemented at Birmingham since he took charge in March.

“I feel much stronger and able to help the team. I’ve been asked to show my power, my strength, and with Jukey (Lukas Jutkiewicz), you are going to get that too.

“I want to be as strong and be a nuisance to play against. Sometimes defenders have had it easy against me but this year I feel much stronger and confident.”

Seven points off the Championship play-offs, it is not inconceivable that with their No.9's prolific form the Blues mount a push for the top six. Achieve that and then the Premier League is only three games away.

To fail in that objective would be a disappointment for Birmingham. And for Adams, of course. Yet the striker is on the path to the top with or without the Midlands club.

It appears he will have his pick of suitors come the summer. The move he makes will have to be the right one but Adams has proven time and time again in his young career that he can make the right choice at the right time.