In 1982 Danish international Allan Simonsen had the world at his feet. The former European Footballer of the Year had enjoyed three successful seasons at Barcelona and was the only man ever to have scored in the European Cup, UEFA Cup, and Cup Winners’ Cup finals. So imagine the shock when one of the deadliest strikers on the planet shunned the advances of Europe’s top clubs and joined Charlton Athletic instead.

When Barcelona signed Diego Maradona in 1982 it wasn’t just one of the biggest transfers in history, it also set about a chain of events that even Derren Brown would have been hard pushed to explain, as one of the most prolific strikers in the game suddenly found himself playing in English football’s second tier.

In the mid 1970s Allan Simonsen was Danish footballing Royalty in an era when the national side were hardly pulling up trees, eventually scoring 20 goals in 55 appearances for his country and becoming one of the most sought-after names anywhere in the game.

Simonsen made his senior debut for Danish side Vejle BK in 1971 winning the Danish Championship in his first and second seasons, as well as the Danish Cup to complete a memorable double. But his breathtaking ability and natural eye for goal meant it wasn’t long before he got the opportunity to test his ability against Europe’s elite clubs, signing for German Bundesliga champions Borussia Mönchengladbach in 1972.

After a slow start he eventually found his feet, banging in 18 goals as Mönchengladbach won the Bundesliga championship in 1975, while also finding the net 10 times in 12 games in the UEFA Cup that season, including two goals in the 5-1 final victory against FC Twente. In the following season Simonsen scored 16 goals as the club regained the Bundesliga title.

In 1977 he helped Mönchengladbach reach the European Cup final, which they eventually lost to Liverpool, but his memorable strike that night and performance throughout the season meant he was awarded the Ballon d’Or, the first Danish player ever to receive the prestigious award. 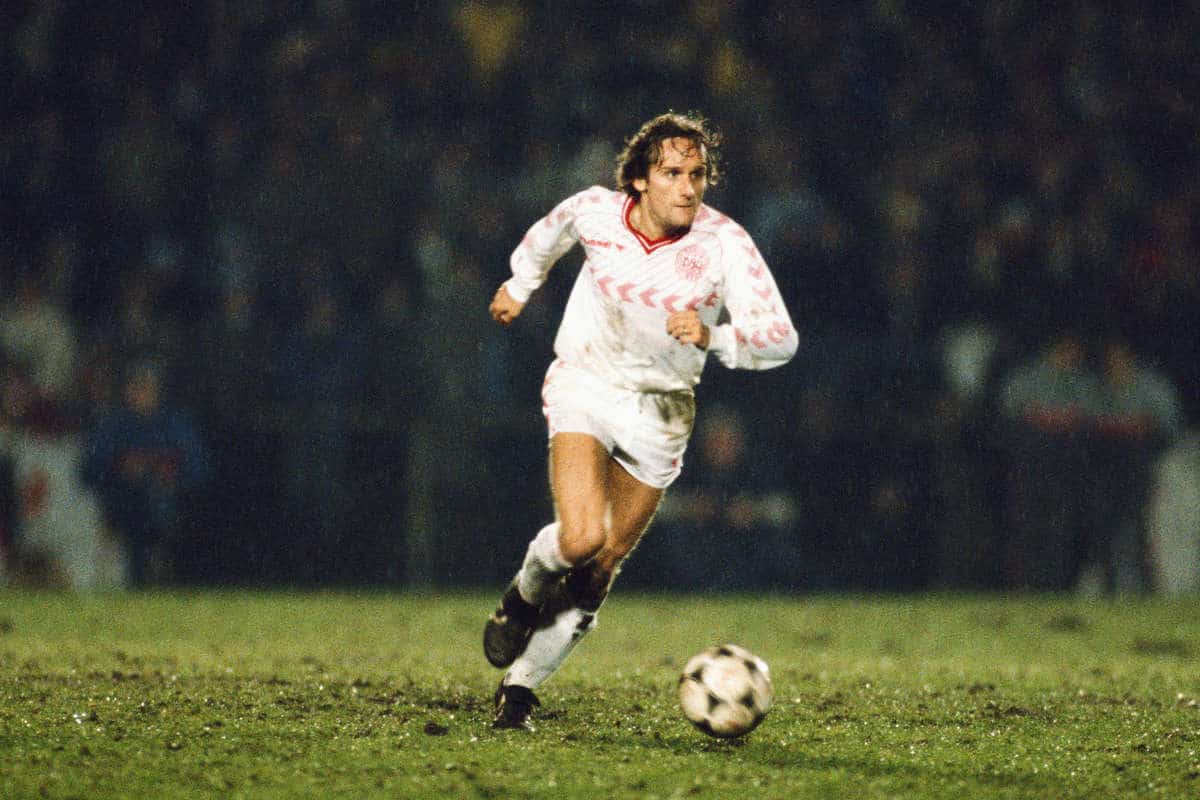 Simonsen continued his prolific goal scoring as Mönchengladbach claimed another European trophy, scoring eight goals in eight games to guide the club to the UEFA Cup final in 1979, even scoring the winner against Red Star Belgrade. By now he was attracting some serious interest from some of the biggest clubs in the game.

When his contract in Germany came to an end Simonsen had the pick of a number of top European sides to choose from, but eventually decided to join Barcelona in 1979, rejecting offers from Hamburg and Juventus, not to mention a number of sides in the Middle East who were prepared to offer very lucrative contracts.

He spent three successful seasons with Barcelona, finishing as the club’s top scorer with 10 goals in 32 games during his first year at the Nou Camp, but his personal achievements did little to hide the fact that his new side were struggling somewhat, both domestically and in Europe as their biggest rivals, Real Madrid, looked to strengthen their grip on La Liga.

Barcelona finished fourth in Simonsen’s first season at the Nou Camp, followed by a fifth place finish and then a runners-up place, but for such a huge club as this, even winning the Copa del Rey and the European Cup Winners’ Cup in 1981 — in which the Dane scored the winning goal — simply wasn’t enough for a club of this stature.

In a bid to compete with their fierce rivals Real Madrid, Barca splashed out £5 million to bring Diego Maradona to the club in a move which ultimately meant one of the most deadly goal-scorers in the game was suddenly looking over his shoulder.

It wasn’t his ability that was the problem, far from it, rather the fact that in Spain rules limited clubs to only two non-Spanish players. Barcelona now boasted Diego Maradona, Bernd Schuster and Allan Simonsen and put simply, two into three didn’t go.

Until now, Simonsen and Bernd Schuster had provided the backbone of Barca's foreign representation, but with the arrival of a player considered to be the greatest in the world, Simonsen soon realised his place was under threat. He was left with a simple choice; fight for his place or leave the club. Seeing this as something of a personal insult and asked for his contract to be cancelled.

It wasn't long before interested parties from across Europe came forward as clubs from Italy, Germany and England all got wind of his newfound availability, with Tottenham Hotspur and Real Madrid emerging as clear favourites to sign him. Simmonsen eventually opted for a life in London but it wasn't to be with the club from White Hart Lane.

At the last moment Charlton had bid £324,000 for the Dane, an offer that blew anything Real or Spurs were willing to pay out of the water and was, incredibly, double the amount that Barcelona had coughed-up for Simonsen three years previously. Few were surprised the offer was accepted, but many were left stunned when they found out where the money had come from.

Some weren’t even sure that the offer was genuine, but when a man who had played at the highest level in the game claimed that the idea of playing at a lower level and an easier way of life appealed to him – not to mention a contract worth £82,000 a year – the doubters soon had to eat their words as Charlton welcomed their very own superstar.

Despite having the largest stadium capacity in England at the time, Charlton were languishing in the English Second Division and pulling in crowds of about 6,000, some 70,000 short of capacity. The previous season, which had seen Charlton finish 13th, had seen the lowest ever gate receipts in the club’s history, with the last time they even half-filled their ground being almost 40 years previously.

Simonsen’s signing was the brainchild of Charlton’s new chairman Mark Hulyer, in a gallant effort to stop the rot and bring the glory days back to the club he loved. Looking to pull off one of the greatest PR stunts ever, Hulyer hoped that a big name signing would help fill The Valley with huge gate receipts eventually providing the money needed to fund the signing. Sadly, it was merely a pipe dream.

Initially things looked promising with over 4,000 coming along to watch their new idol in a reserve game, an attendance that rivalled their usual turnout for league games. Four days later more than 10,000 were there to see Simonsen play in a 3-2 league defeat to Middlesbrough.

In his first 16 games with the club, Simonsen scored nine goals and was without doubt the best player on the pitch. In a game against fellow strugglers Chelsea he was instrumental in an incredible comeback which saw the Addicks turn out 5-2 winners, despite having been 2-1 down with just 12 minutes remaining. Simonsen scored two and played a part in the other three.

The new signing was a class above the rest, his natural ability and creativity was way beyond those who he now faced regularly in England’s second flight. The problem was, he wasn’t just a cut above those he was playing against; he was on a completely different wavelength from his teammates as well. 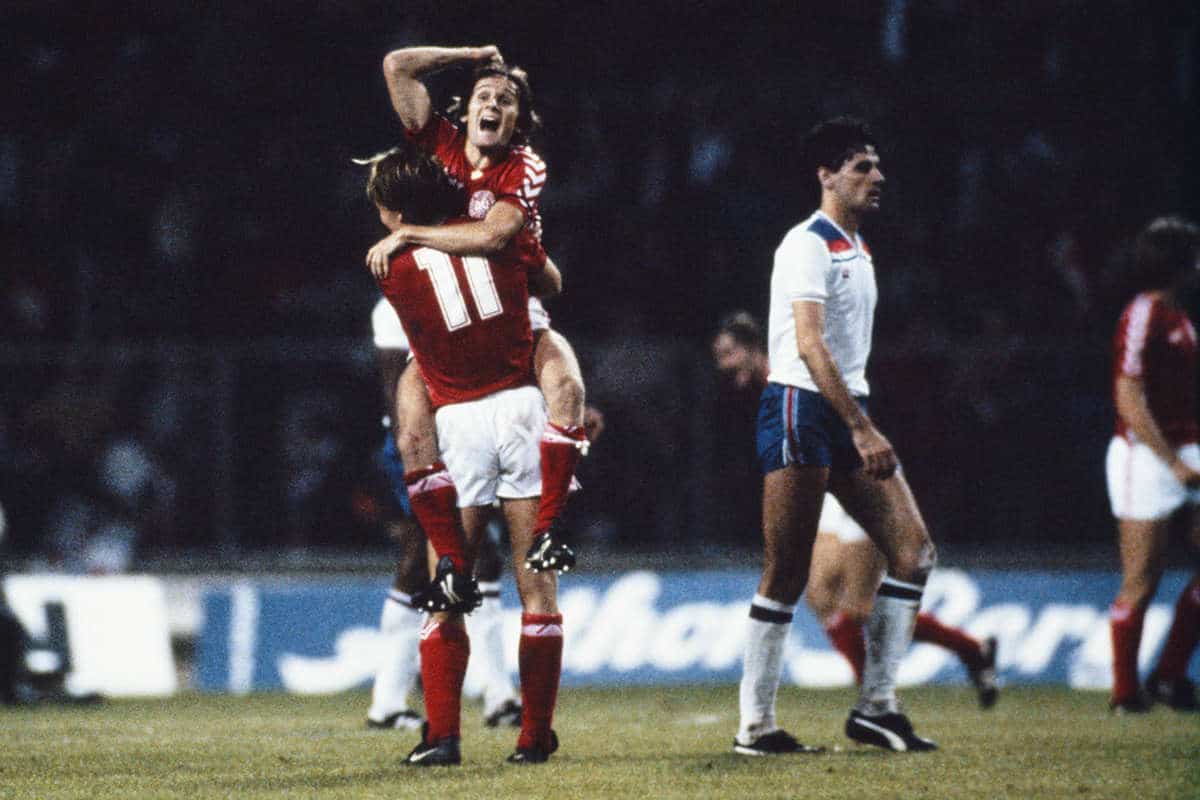 Despite improving Charlton as a side the move had failed to capture the imagination of the public in the way that Hulyer had hoped. Gates may have risen from 4,000 to 10,000, but that was still not even a quarter of The Valley’s huge capacity. Put simply, Simonsen’s arrival had put Charlton on the map, but had almost bankrupted them in the process. He’d doubled the gates but increased the debt almost ten-fold.

Another problem for the struggling Addicks was that they had only paid around half of what they had agreed for Simonsen's the services and offloading him wasn’t an option. To make things worse, when he signed, Simonsen’s agent, suspicious of Charlton’s ability to afford him, had placed a release clause in the player’s contract.

Only when it was made clear to Simonsen that Charlton could no longer pay his wages did he take matters into his own hands and enact the release clause himself returning to his boyhood club, VB, in Denmark. He'd played 17 games for Charlton, scoring 9 goals at around £35,000 a pop, for the South Londoners who had quite literally broken the bank to sign him.

Charlton eventually finished 18th after Simonsen’s departure, five places lower than the previous season and only avoiding relegation on the last day of the season and rather than his deadly through balls, sublime crosses and clever link-up play, his lasting legacy was to be the throbbing financial headache that saw Charlton Chairman Mark Hulyer landed with an Inland Revenue bill of £145k, along with bankruptcy petitions and winding up orders from disgruntled creditors.

The signing of Allan Simonsen in 1982 wasn’t just the mother of all gambles, it was also the catalyst of a period that led to Charlton’s ultimate demise off the field and by 1984 the club was around £400,000 in debt with little chance of paying it back. With few options available to them the club restructured, entered administration and left The Valley, the ground they had called home for 60 years, to share with Crystal Palace.

The club did eventually win promotion to England’s top-flight under Lenny Lawrence in 1986 but off the field the club struggled for years to come, remaining in exile and without a home until they finally returned to The Valley in 1992.

Indeed, the signing of the club’s very first Galáctico had been a huge PR stunt which had certainly put Charlton Athletic back on the map; but it had also come at a price and no doubt one that, all these years on, Charlton fans will say wasn’t worth paying.