With four games left to play squeaky bum time is here for Charlton. Can they beat Crewe to jump back into the top six? Find out with our Charlton vs Crewe match preview with free tips, predictions and odds mentioned along the way.

Charlton to move back into the top six

Despite sitting eight in the table, Charlton are probably one of the better positioned sides to make the top six with games in hand over a lot of those above them. They were unbeaten in 10 before falling to a narrow loss against Peterborough and we fully expect them to win again on Tuesday as they host Crewe. After all, Crewe have only managed a single win from their last five games and reside in mid table with nothing to play for.

Charlton to win and keep a clean sheet

If prediction number one is for Charlton to win then the next of our tips lays out how we think it will happen. Given the recent form of both sides we expect Charlton to record a clean sheet against Crewe. The Addicks have only conceded two goals in their last five matches – that's one goal in two of those five games. Then you have Crewe who are hardly a goal getting machine; in their previous five matches they have netted three goals and have failed to score in three of them. They've also failed to score in their last four games against Charlton with the playoff chasers winning all of them.

With the prediction already made that Crewe will form part of a score line to ‘nil' we turn our attention to the total number of goals we'll see. Our advice would be not to expect a bucket load. Charlton's games have ended under that level in three of their last five home matches whilst four of the last Crewe away games have finished with fewer than three goals. To drive that stats home further, the game averages over those respective periods don't read well either. Charlton's sits at 2.2 goals per game with Crewe's sitting on a square two. When the duo met earlier in the season Charlton ran out 2-0 winners.

Charlton vs Crewe: Your key stats

Charlton to turn up the heat in race for playoffs

Charlton sit just outside the top six but know that their fate is firmly in their hands. A Crewe side that are essentially treading water through to the seasons end should be the next three points chalked off.

Charlton vs Crewe: Before you go… 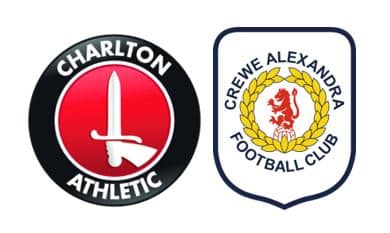