The AFC Champions League 2017 gets underway this week as 32 of Asia’s leading club sides compete for continental glory and, once more, 2013 and 2015 champions Guangzhou Evergrande will be the side to beat over the coming months.

For the experienced Cantonese side, nothing less than the title will be seen as acceptable following a disappointing group stage exit in 2016. For coach Luiz Felipe Scolari, the pressure is on.

However, for once leading into the competition it is Evergrande’s opponents who are stealing the limelight in the form of Hong Kong league champions Eastern Long Lions.

Not only are Eastern the first Hong Kong side to experience life in the Champions League proper, but in Chan Yuen-ting they will also feature the first female head coach in the competition’s history.

Having sealed league title success in 2016, Chan’s story is already widely known, but Eastern’s Champions League debut has seen a second surge of interest in the remarkable story. Participation in the continent’s premier club competition is just the latest first for a true trailblazer.

For perhaps the first time in his career in Asia, Scolari will go into a match without the media's attention.

For a clash which Evergrande should win comfortably in regular circumstances, there is unprecedented interest in the upcoming fixture. Not only is Chan’s presence a point of interest, but the match also represents a rare local derby between a Chinese and Hong Kong side.

Perhaps fortunately for the 28-year-old coach, controversy struck in recent days with the late cancellation of the Hong Kong side’s ticket allocation, with attention moving away from the coach to the political tensions surrounding Hong Kong in recent years.

Officially ‘internal problems’ at Eastern led to the late alteration in plans and decision to compensate the travelling support, but it is widely believed political sensitivities ahead of Hong Kong’s Chief Executive elections this year led to the sudden change of heart. Whatever happens, it is a game which threatens to be controversial.

Whatever is occurring off the pitch, it is Chan’s presence on the touchline which will surely be the long-term legacy of the tie. While she may be operating in the relatively small confines of the Hong Kong Premier League, her successes are breaking down barriers for female coaches worldwide. 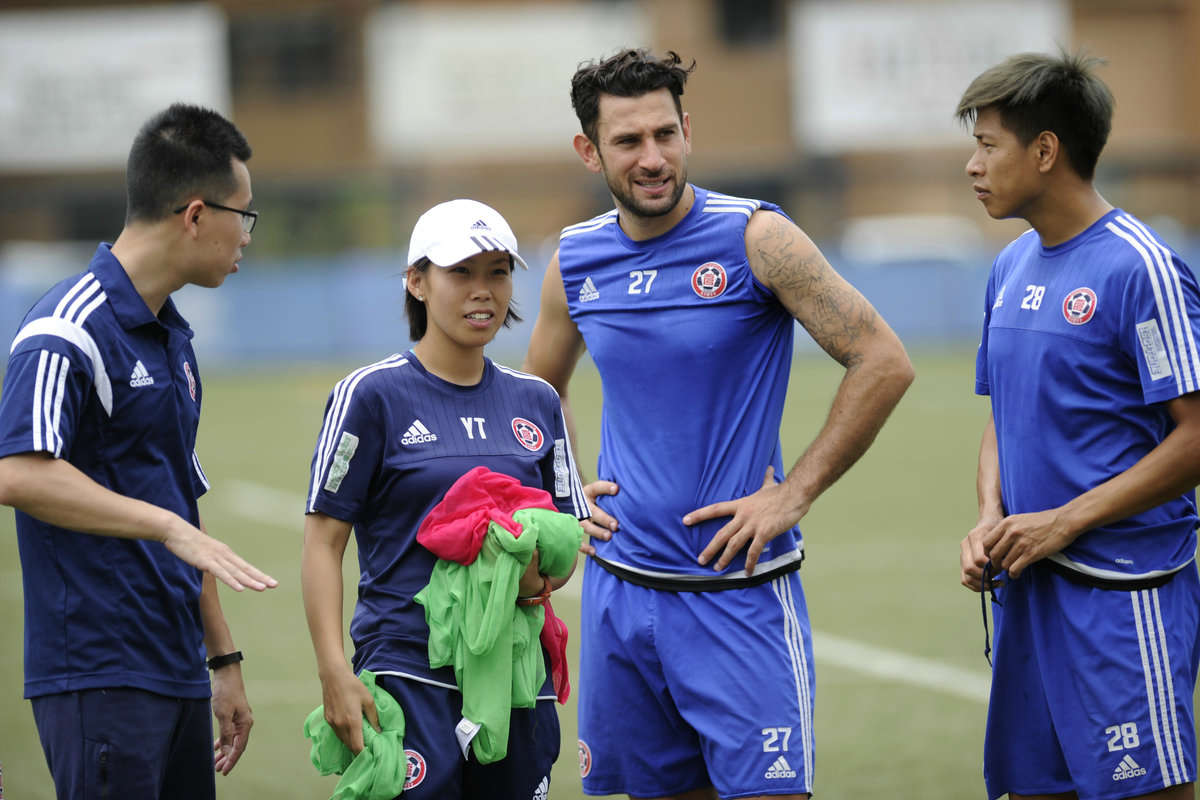 Australian defender Josh Mitchell is one of the few Eastern players who has experience of playing against Evergrande having previously spent two seasons with Chinese Super League side Liaoning.

Speaking to FourFourTwo Australia last summer, the Australian was glowing in his praise of Chan’s work and the future for women coaches in football.

“She’s been excellent. She’s very thorough, you can tell she just wants to achieve success in her role as well as for the team,” he said.

“I’m sure more and more female coaches will pop up and be given opportunities because it really is a case of if you do a good job you’ll get the respect you deserve, regardless of your gender.”

Having begun life as a data analyst at Sun Pegasus, Chan worked her way through under-18 head coach and assistant coach roles to earn the top job just a little over a year ago. As recognition for her rapid ascent to success, the Sha Tin native was named AFC Women’s Coach of the Year in November 2016 .

“Being the Eastern head coach is just the first step in my coaching career,” she told South China Morning Post in 2016.

“I want to be a success so I can have the opportunity of joining other developed leagues in the region such as South Korea where they have a women’s professional league or Japan, which has won the women’s World Cup.”

For the moment, though, Chan is firmly focused upon the task at hand in the AFC Champions league. In opponents Kawasaki Frontale, Suwon Samsung Bluewings and Guangzhou Evergrande, Eastern must test themselves against three of Asia’s most prestigious clubs with budgets dwarfing that of the Hong Kong side.

Given all three sides they will encounter in the group will be hopeful of going deep in the competition, Chan’s side will have their work cut out to claim any points over the next two months.

However, with absolutely nothing to lose and a fine story behind their progress, Eastern are sure to be neutrals’ favourites while their run lasts.

“I think we all understand that we just need to show everyone what we can do,” she told The-AFC.com this week.

“We are representing Hong Kong and we know we have a lot of support behind us. I think we can maybe draw a few games in the Group Stage.”

In front of 40,000 in Guangzhou’s Tianhe Stadium on Wednesday, Chan Yuen-ting could not ask for a bigger stage in Asian football upon which to test herself and her side. If Eastern can even slightly worry their illustrious rivals, the already burgeoning reputation of ‘Beef Ball’ will only grow further.

STORM FROM THE EAST: IS THE CHINESE SUPER LEAGUE A REAL THREAT?