Wolverhampton Wanderers will return to the Premier League next season but, if reports are to be believed, they might be without one of the stars of their promotion campaign.

According to Marcus Alves, a journalist based in Lisbon, Rúben Neves is a top transfer target for Liverpool and negotiations are underway to bring the midfielder to Anfield. And it's not the first time the 21-year-old has been linked with a move to Merseyside.

Back in January 2015, the heir to Sergio Busquets’ crown as best holding midfielder in the world.

Then, in October 2015, just weeks after Jürgen Klopp replaced Brendan Rodgers as manager, The Mirror claimed the Reds sent scouts to watch Neves in a Champions League match with a view to buy in January 2016.

Last summer, A Bola, a news outlet in Portugal, revealed Porto wanted to cash in on their midfield maestro and that England was his most likely destination. Liverpool were named alongside Chelsea as the two clubs leading the race for the youngster but it was Wolves, playing in the Championship, who pulled off a coup to land the Portugal international for a club-record £16million.

It was always going to be tricky for Nuno Espírito Santo to keep his squad together at the Molineux if they all performed to the best of their abilities – which Neves has – especially with super-agent Jorge Mendes pulling the strings. The former Porto man did, however, recently imply he'd be staying with the club for another season: “It’s [going to be] my first season in the Premier League, it’s the place that Wolves deserve, that the fans deserve as well.”

But with Manchester United, Manchester City and Chelsea all reportedly in the market for a midfielder of a similar profile, his first season in the English top flight not be with Wolves.

Who is Rúben Neves?

Neves joined Porto's youth system at the age of eight and worked his way through the club's academy. During pre-season in 2014, the midfielder was called up to the reserve side but was presented a chance with the senior squad after injuries to first-team players. He did enough to impress then manager Julen Lopetegui and made his debut in the Primeira Liga in the August, becoming the youngest goalscorer in the club's history.

He's also the youngest Portuguese player to appear in the Champions League and the youngest player to start in Europe's elite competition as a captain. It shows that, despite his young age, he's a mature individual.

It's also the measure of him as a man that he's now starring for a manager in Nuno who publicly embarrassed him during their time together at Porto. The midfielder was told to warm up during a Champions League play-off against Roma but was then ignored in favour of Evandro. He was pictured crying on the bench after his frustration had bubbled over.

Yet this season he's been putting in man-of-the-match performances for Nuno. There are clearly no hard feelings shared between the two – not only is Neves mature, he's also professional. Interested clubs will be looking at that in a positive light; they aren't just investing in the player on the pitch but the man off of it, after all.

Neves is having his own Goal of the Season competition. The best was perhaps his recent strike against Derby County. A corner kick was cleared and Neves picked the ball up 35 yards from goal. He nonchalantly flicked it back on to his stronger right side before firing into the top corner. It looked effortless.

But he's not in the team to score goals. He's there to provide the ammunition for others and does so with his progressive, probing and ambitious passing. The 21-year-old is a locksmith capable of picking open defences at will.

Neves is an all-rounder in playing terms. He’s not just a defensive midfielder but, similarly,  he’s not just a deep-lying playmaker. Placing him in one category is disrespectful. He merges the two roles together and under the right guidance he could excel in either or both. He’s a hybrid – a two-in-one kind of player.

For those familiar with Fernando Redondo, there are comparisons between the two. Neves is the type of player to shield the defence, make an interception, but, instead of playing it to his midfield partner, he’d opt play an incisive pass forward into an attacking midfielder's feet, which gets the team on their way.

When it comes to passing, he has the ability to mix it up. He can play the simple passes, the long diagonal switches and he can also execute more creative, between-the-lines passes. A menu of what he can serve up when in possession can be seen below. 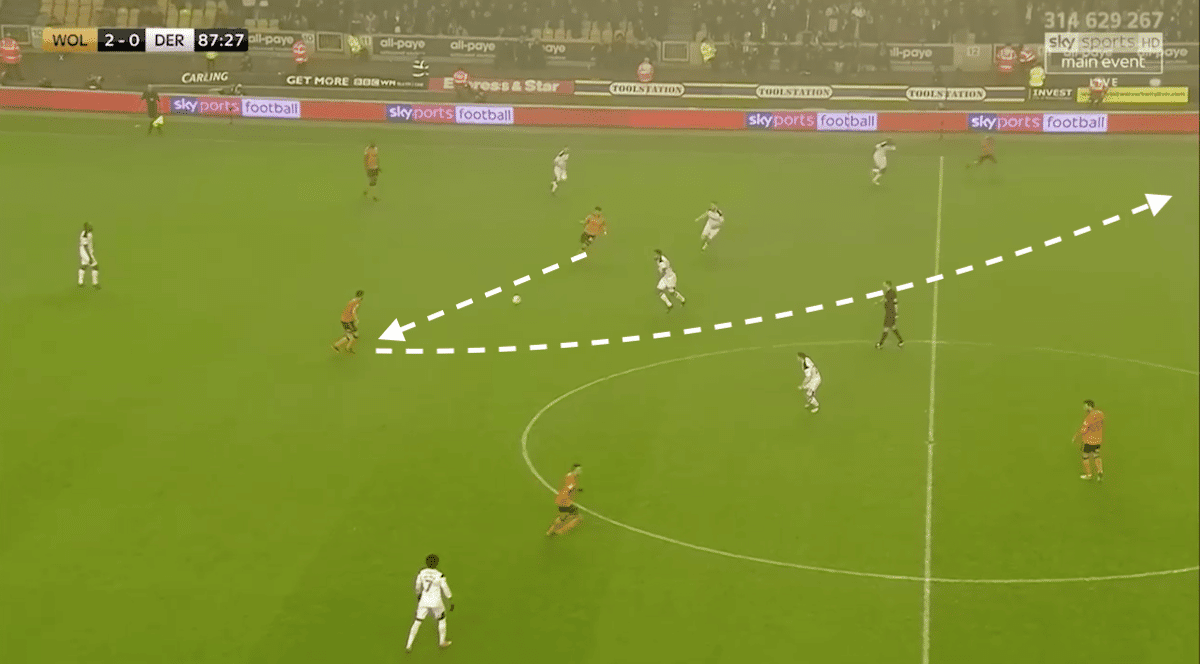 Neves receives the ball and, without taking a touch, he fires a pass into the space ahead of the left wing-back. It looks simplistic given how disorganised Derby are, but plenty of players take a touch to fully set themselves before playing this. The quickness with which the Portuguese midfielder gets the ball forward, aided by the run of his team-mate, is what enables Wolves to play through the press and create the opportunity.

He has an 84 per cent pass success rate this season and completes 70.3 per cent of the long balls he plays. 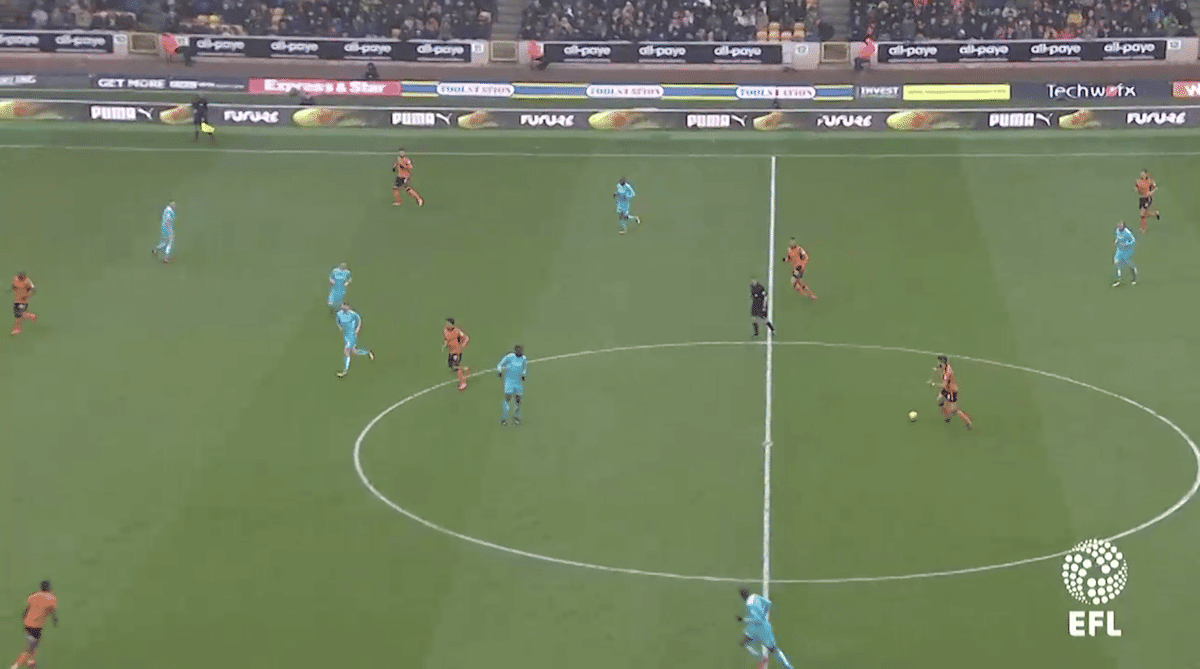 In the picture above, Neves picks the ball up inside his own half – a common sight for Wolves fans this season. He feints to play a switch to the left flank on more than one occasion while carrying the ball into the opposition's half. 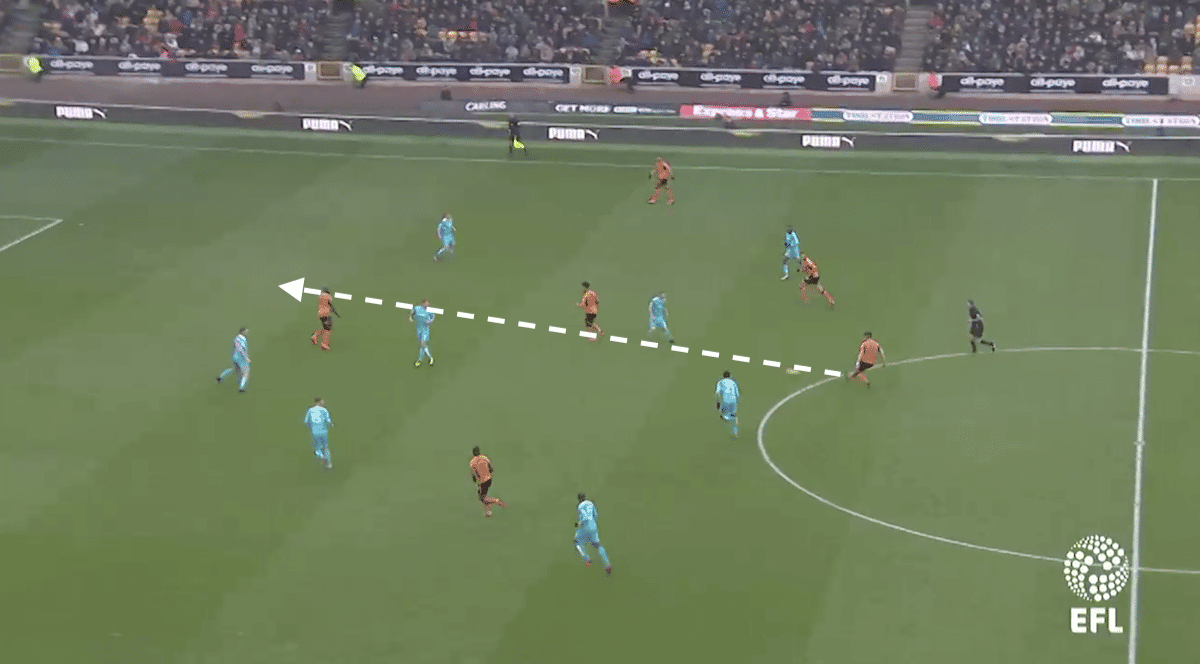 He's able to effectively walk forward with the ball while those in blue eagerly anticipate his next move. Some are visibly unsure where they should be and this creates enough of an opening for Neves to thread an incisive ball through the centre of the pitch and into the path of Benik Afobe.

Would he be allowed such time and space in the Premier League? Perhaps not. But it's encouraging to see him being confident enough to carry the ball forward and not just looking to pass it off as soon as he can.

That's what’s admirable when watching him play: he always seems to be brave when in possession. When you’re a tempo-setting midfielder it’s vital to get the team going; it may be tempting to play simple passes here and there but Neves always seemingly looks to play risky passes, and Wolves have looked much better with him in their side.

The opposition he's come up against this season might not be the greatest, but the time spent in the Championship will no doubt have toughened him up and will stand him in good stead for the rigours of the English top flight. He could adapt to play in a three despite operating for the majority of the season in a midfield two in Wolves' 3-4-3 system.

Parting with £30million to sign Neves may seem like a risk, but in the current market it's got the potential to be a bargain. If he adapts as quickly as he did to the Championship then he's a starting midfielder for the next decade. He could be this summer's hottest property.