With a few exceptions, the Championship was once the preserve of players either not good enough for the top-flight or not possessing the requisite skill set to consistently perform in the Premier League.

As a result, when it came to the transfer window, Premier League clubs tended to shy away and turned to Europe for their recruitment. But that process led to young, British players often being squeezed out, with the risk of failure simply too high.

Consequently – coupled with a change in approach in terms of coaching appointments – there has a big shift in the second tier with room for more technical footballers given room to flourish.

The Championship is an increasingly appealing marketplace for top-flight teams, looking for that forever-held desire commodity of value in the window.

So ahead of January, we look at seven Championship stars who could be on the shortlists of Premier League clubs.

It’s curious that for all the hullabaloo and, “will he? won’t he?” drama of the last few days of the summer window surrounding Grealish’s supposed transfer to Tottenham Hotspur, the speculation was killed stone dead on September 1.

Some of it may have been engineered for the purposes of entertainment but Steve Bruce claimed Spurs declared their interest too late in the summer. Yet, now they seem to have abandoned all plans to sign the 23-year-old.

If a club of the magnitude of Tottenham wanted the attacking midfielder, surely a team lower down the food chain would be keen? After a slow start, Grealish is showing signs of returning to his impactful best as Villa target Premier League promotion.

Yes, he’d undoubtedly be at the higher end of the price range when buying from the Championship, but his talents as a playmaker are ideally suited to the top-flight. Look how seamlessly, for example, James Maddison and David Brooks have adapted, due to their technical prowess.

Villa’s signing of the excellent John McGinn has ensured Grealish’s departure won’t leave such a creative void and, although they’d dearly love to keep hold of their creative talisman, with 11 points to make up on second-placed Norwich, the right offer may be too good to turn down.

As the Bees continue to slide down the table following the departure of Dean Smith to Villa, the chance of holding onto their prized assets dims by the week. 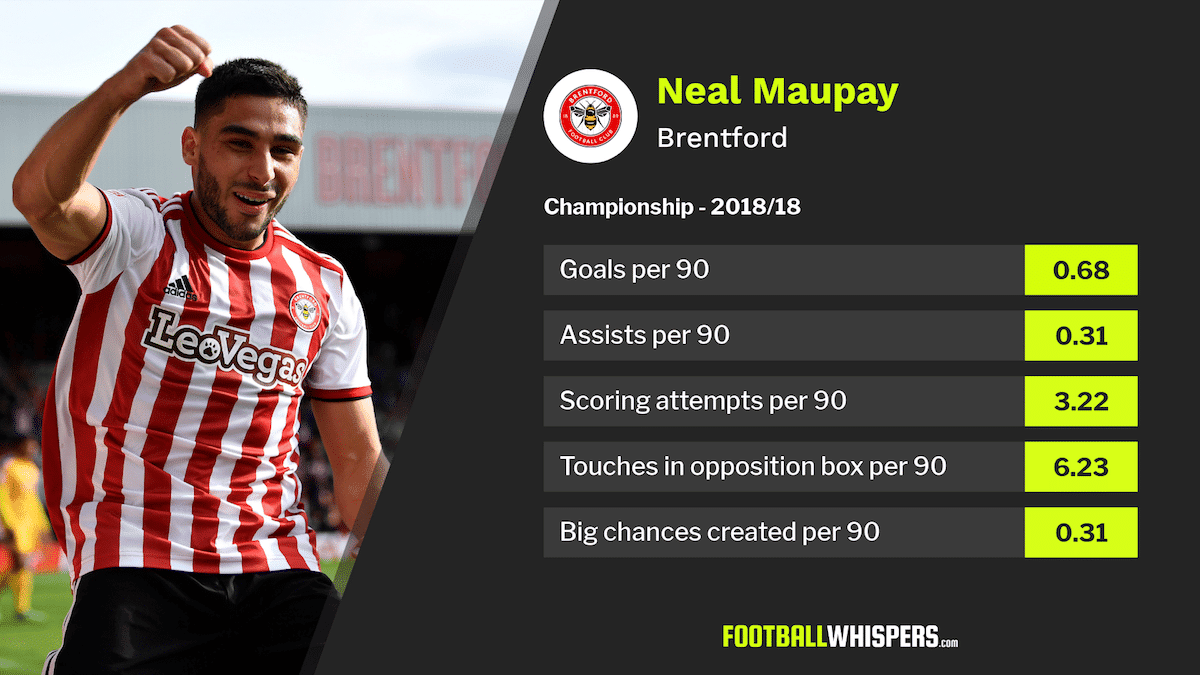 With outstanding finishing capabilities, a willingness to share the ball and bring his teammates into play, excellent body strength and physical gifts and a striker who is unafraid to indulge in the dark arts, he is a tailor-made target man for any Premier League side who likes to play with one up top.

For the likes of Huddersfield Town, Burnley, Cardiff or Fulham, sides struggling to score goals and provide a consistent offensive threat, Maupay is a player who simply has to be on their radar.

Dynamic full-backs can be as integral to a team’s success as solid centre-backs or free-scoring forwards and in 18-year-old Aarons, the Canaries have unearthed a gem who looks destined for the Premier League one way or another.

He’s only four months into his professional career at Carrow Road but has been a fixture of Daniel Farke’s side and has impressed not only with his capabilities going forward but his calmness on the ball and defensive acumen.

The right-back is very young and very raw, while performing in a successful team may help gloss over certain imperfections, but his development cannot have gone unnoticed among the bigger clubs who have been drawn to East Anglia to watch Farke’s exciting team.

What would be sensible and prudent is for Aarons to remain at Norwich for the foreseeable future; he is settled in a system and under a coach who trusts him. But, unfortunately, such is the natural order if a Premier League club comes knocking with a significant offer, it’ll be hard for the Championship side to say no.

And if Aarons continues on such an upwards trend, his value is only going to increase in kind. Something Norwich, and any potential suitors will be more than aware of.

There’s a certain sense of irony to the fact that for all the flamboyance, outside-of-the-box thinking and general unorthodoxy Marcelo Bielsa has brought to Leeds this season, arguably their top performer is a hard-working defensive midfielder who keeps it simple.

Phillips, 23, was actually used in a more advanced role last season but Bielsa’s judgement has helped him flourished when positioned deeper where his positioning and speed of passing has been critical in keeping the Leeds engine purring.

The Premier League is a very different beast in terms of the quality of opposition he would be up against, not to mention the more aggressive and precise pressing, but you don’t start for a Bielsa-led side if you can’t move the ball quickly and efficiently.

Phillips also appears to possess real leadership characteristics and although Leeds would want to hold onto him for their promotion push, for any Premier League side who prioritises speed of possession and ball retention –Bournemouth, Wolves and Southampton with Ralph Hasenhüttl at the helm – he would appeal.

Whereas Phillips is well-established in Bielsa’s Leeds team, Clarke has existed on the periphery, making a handful of substitute appearances. That’s not a slight on his ability, far from it, it’s because he only turned 18 last month.

There is understandable excitement around Elland Road about the potential of the young forward, who for now looks more of a winger but over time will drift more into a central role. His cameos have revealed a prodigious and fearless talent who’s direct and constantly on the front foot.

In an age when dribbling and the ability to unsettle well-organised and rigid defences a key asset, Clarke is very much the model of the modern forward as he makes things happen with a quick shimmy or turn of pace.

Of course, it is far too early to be discussing his Premier League potential and in a perfect world he’d be a Leeds player until well into his early 20s but, unfortunately, money talks and if a Premier League club – with Manchester City having scouted him – want his development on their watch, they can make it happen.

Tony Pulis' identity as a manager is well-established and his ability to make his teams dogged, determined and difficult to beat, almost legendary.

It’s no great shock that Boro have the best defence in the Championship, with only league leaders Leeds for company in that department.

What is surprising, however, is at the heart of that defence is a 21-year-old whose admirers reportedly include Liverpool, Chelsea, Manchester United, Tottenham, Celtic and Leicester.

Fry is no overnight success, either, having made his debut three years ago and been capped for England at every level from Under-17 to Under-21. 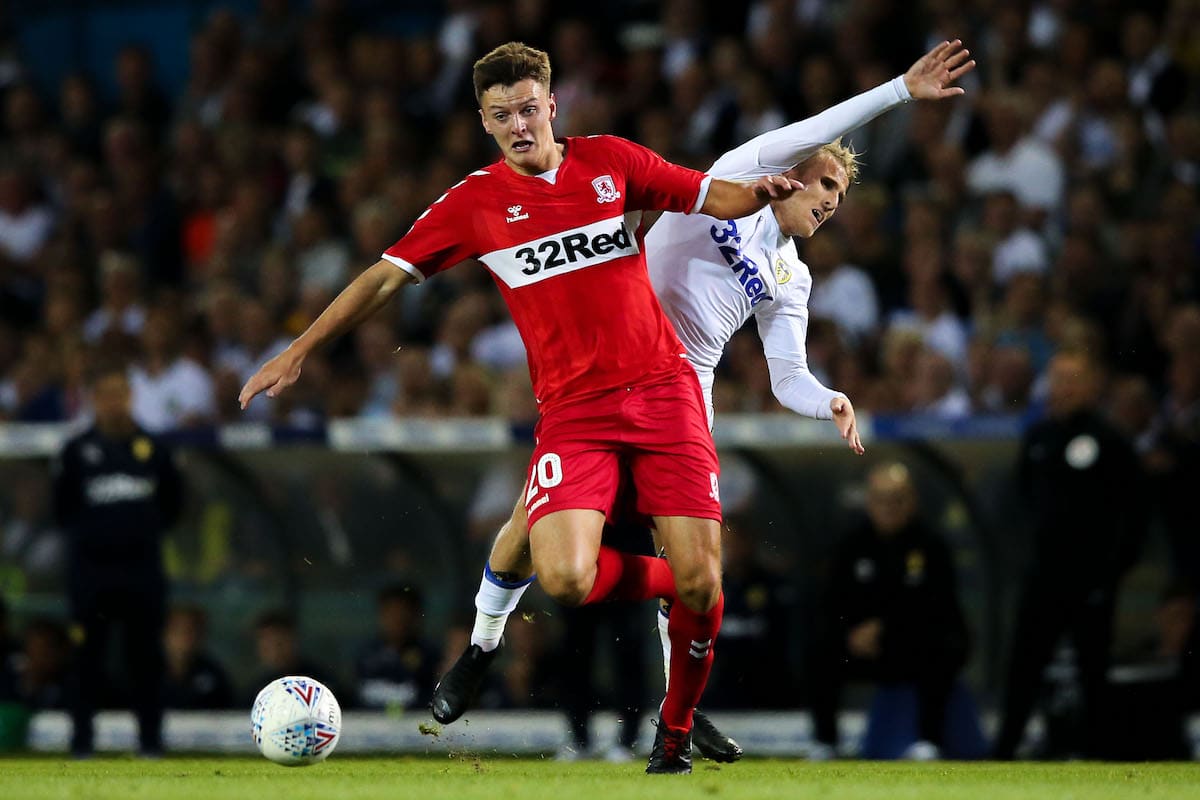 His gradual rise is one of careful management on the part of Boro but also circumstance, as if they were still a Premier League club, he’d arguably not be getting the same level of consistent game time.

Comfortable at right-back or in the centre, Fry is tall but also has an elegance on the ball, awareness of danger and overall reading of the game plus has taken on a greater sense of responsibility in being a defensive organiser.

Eventually, someone will test Boro’s mettle, the only question is when.

Much of the appeal surrounding Graham Potter’s appointment at the Liberty Stadium surrounded his belief in the aesthetically-pleasing side of the game, true to Swansea’s modern traditions, and his willingness to invest in youth.

Although the Swans have been inconsistent in their first five months under the former Östersunds’ coach, both characteristics of his management style have played out in South Wales and if this season proves unsuccessful in terms of promotion, the club looks to have a bright future.

Among the examples of Potter’s progress is 21-year-old, Swansea born-and-bred, Cheltenham Town. What immediately stands out about the defender is his technique and desire to play his way out of trouble.

The Championship is traditionally an unforgiving place for more cultured footballers but the influx of forward-thinking coaches has helped shake that persona. As a result, more players of Rodon’s ilk should emerge.

Potter is not alone in how he approaches the game, which means the players who develop on his watch should be increasingly Premier League-ready, sending scouts along the M4 more regularly. Rodon could prove the first of many.