Championship Manager – now Football Manager – is a game like no other. It pulls you in, toys with your emotions and can leave you wondering quite how you've managed to lose several hours of your day.

It's so addictive it should come with a health warning on the box. But for so many different reasons we love it. That will never change.

One of the biggest highs you can feel while playing the game is finding that hidden gem that can transform your side. Few life experiences match the elation of discovering a 16-year-old Lithuanian with the potential to become a world star.

Over the years the wonderkids in different versions of the game have taken on an almost iconic status. Their real life careers have rarely panned out as hoped but they will for ever be immortal thanks to Championship Manager.

And that got us thinking, which of these legends are still plying their trade today? It turns out a fair few. And we've picked seven stand-outs. Prepare for a nostalgia rush. 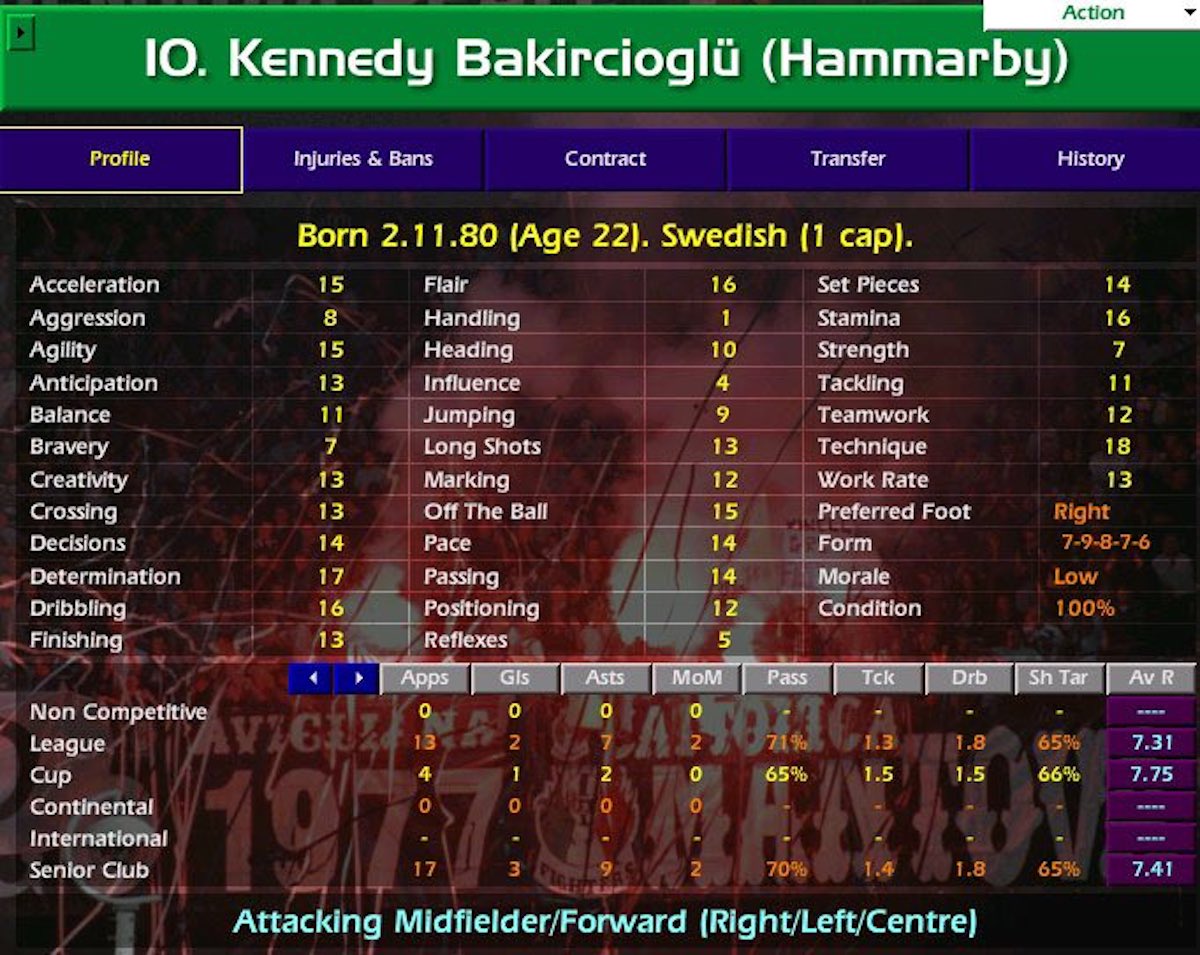 One of the series' first icons. The midfielder was a must buy from Swedish side Hammarby for several editions, but his peak was Championship Manager 3.

Affordable for the majority of clubs, sign Bakircioglü and you'd have one of the world's great midfielders. He was able to score from any area of the pitch and could guide the most modest of sides to Champions League glory.

Unfortunately his real life career didn't have the same success. He was by no means a failure, like others on this list, and had spells in Holland with Twente, Racing Santander.

Now 37 years old, he is still playing and is back at Hammarby. Deployed as a deep-lying creative midfielder, Bakircioglü has already featured in the 2018 Swedish season.

Load up Championship Manager 4, take charge of your club and immediately submit a bid of under £1million for the Litex Lovech teenager.

If you were able to secure a work permit for 17-year-old Todorov, then you had a star striker for the next 15 years in place. He had it all; pace, composure, movement and, above all else, incredible finishing. He was a dream.

Unfortunately for Todorov his career hasn't come close to hitting the heights of his CM4 counterpart. He has played for 12 different clubs since his days at Litex and is now regarded as a midfielder.

He hasn't come close to representing Bulgaria, either. He is still going, however, at the age of 32 and turns out for Bulgarian third division side OFC Spartak Pleven. Don't worry, Anatoli, we still love you. 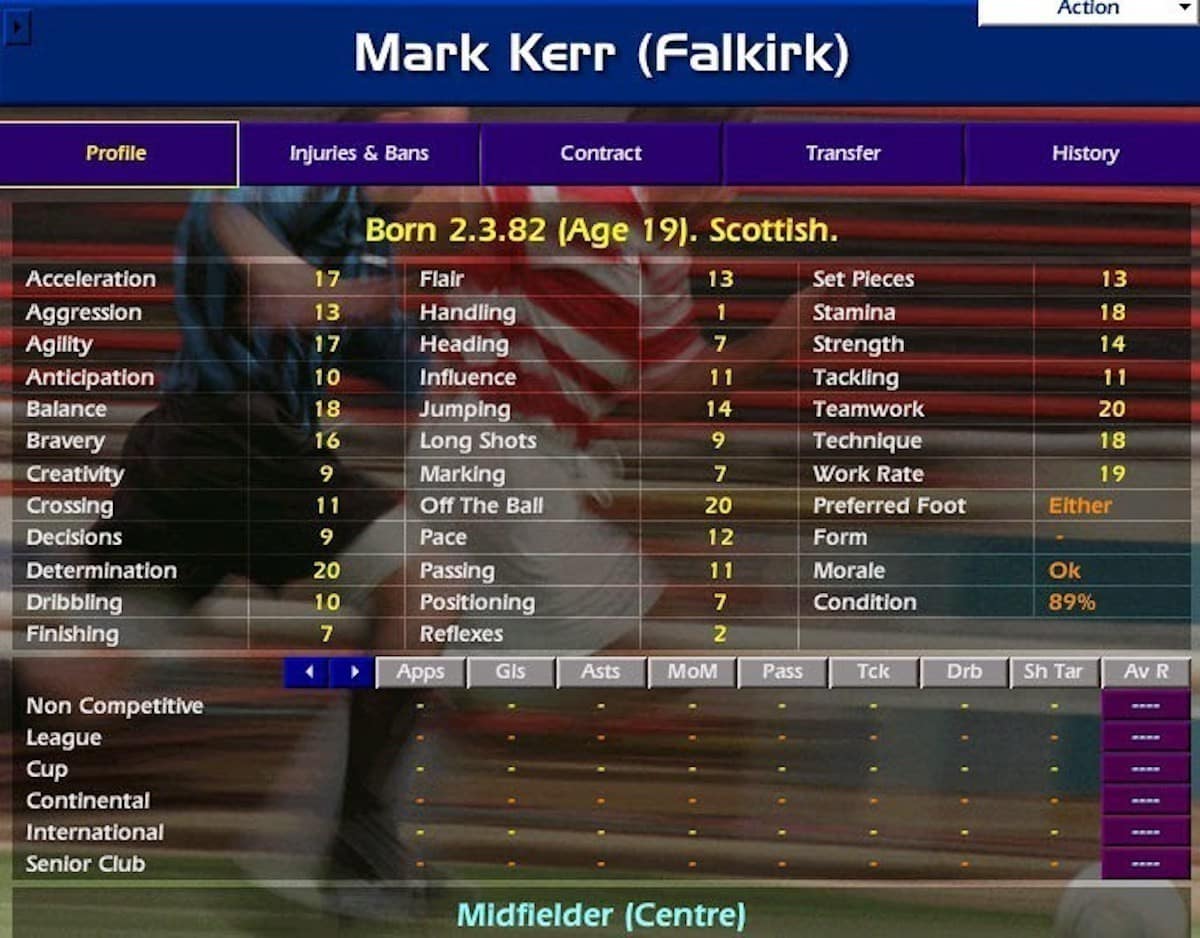 Another of Championship Manager's favourite sons. On CM01/02 the Scottish midfielder's stats were by no means the best, but they suited the match engine perfectly.

Signing him from Falkirk almost felt like having a cheat code; he was a beast. An affordable Scottish midfielder who could dominate games alone.

Kerr didn't, sadly, enjoy the same success in real life. After five years with Falkirk he left the club in 2003 for Dundee United. He has since played for a number of different sides in Scotland and also had a season-long spell in Greece with Asteras Tripolis.

The club was a step into the unknown for Kerr, but his teammates, while never having seen him play, knew full well who Kerr was thanks to his CM fame.

Now 36 years old, Kerr is in the twilight of his career. He was released by Falkirk in January and joined Scottish League One side Ayr United.

Another CM01/02 star. Arca joined Sunderland in the summer of 2000 from Argentinos Juniors with the Black Cats beating off competition from Newcastle United and Leeds United for his signature. That meant Argentine had a big reputation and it was reflected in the game.

If you could prise Arca away from the Stadium of Light, and he often didn't come cheaply, you had the perfect attacking full-back – his Sunderland teammate and fellow Argentine Nicolás Medina wasn't bad either.

Unlike many on this list, Arca had a successful playing career at the top level. He spent six years with Sunderland before leaving for Middlesbrough.

Perfectly happy in the North East, he stayed with Boro until he retired in 2013 because of a foot injury.

However, in 2015 it was reported Arca was playing for Northern Premier League Division One North side South Shields. The story turned out to be true.

“The older you get the more you enjoy playing football,” the now 37-year-old said in an interview with the Guardian last year. “They’re great lads, great fans here. I’m really excited to be part of this team.”

Roncatto started the game as a 17-year-old at Brazilian club Guarani but a bid of around £2.5million would be enough to bring him to Europe – although securing a work permit for him to play in the Premier League was always tricky.

What you would get was a striker who, despite his tender age, had 20 finishing, 17 pace, and 13 off the ball movement. He was ready-made for any division and could easily be a starter for 15 years plus.

Unsurprisingly outside the world of Championship Manager, Roncatto never lived up to his early hype. He's played for a string of different Brazilian sides, had spells in Portugal, Cyprus, Kazakhstan and Norway, and now plies his trade in Greece with third tier side Kalamata.

He's certainly had an eclectic career, if not a successful one.

The most high-profile wonderkid ever? Adu was the great hope of American football/soccer. He was dubbed the next Pele and became the youngster athlete to sign a professional contract in the USA after being selected by D.C. United in the MLS SuperDraft in 2004.

His real life potential was reflected in the game and in several editions Adu was one of the must buys. Nurture him in the right fashion and he'd grow into the star he was expected to become.

But that weight of expectation weighed heavily on Adu outside of the CM world. He started off brightly and was capped by the national team at 16, but the winger's career soon stalled and he was traded to Real Salt Lake in 2006.

That was the beginning of the end for America's first football sensation. He lasted just eight months before heading to Europe where he joined Benfica in the summer of 2007.

He has since played for clubs in Portugal, France, Greece, Turkey, Brazil, Serbia, and Finland. He finished up a spell with the Tampa Bay Rowdies, now home of former Chelsea star Joe Cole, and has since been on trial with several clubs in hope of securing another contract.

Incredibly, he is still more than two years away from celebrating his 30th birthday. So expect Adu to pitch up at another unexpected footballing outpost in the near future.

While Cherno Samba was every Championship Manager player's dreamboat in the early noughties, there was another young Millwall striker on the 03/04 edition of the game that could win your heart.

Ashikodi was a 16-year-old prospect who, much like Samba, was tipped to play for England. It's why with the right nurturing he would become one of the most fearsome strikers in the world in the game.

Available for a small compensation fee at the start of any new save, Ashikodi was the ideal signing. Within three years he'd be a great and you'd never have to think about signing a striker for close to a decade.

Unfortunately for Ashikodi his real life career hasn't been as glorious. He left Millwall in April 2004 after allegedly threatening a teammate with a knife. He was picked up by West Ham United but last just 18 months before leaving for Rangers.

And so began his nomadic career. He's since played for close to 30 different clubs in the lower levels of the English game and is currently representing Kent-based side Rochester United.