As swingeing inequalities push the top of the Premier League ever increasingly away from its bottom, it is tempting to conceive of the Championship as little more than the wilderness into which are banished those who have failed in their bid to make a dent in the hierarchy of English football.

Of course, as natural resources are hoarded by the more financially able clubs, the second tier of England’s league structure has become the playground in which the stars of tomorrow are blooded.

But in recent years, the Championship itself has provided us with footballers who have gone on to impress at the top table of English football, working their way up from lower league sides until they were picked up by Premier League clubs.

Last season saw the emergence of David Brooks, James Maddison, the Murphy twins and Bobby Reid, all of whom became important for their teams in their debut seasons.

But with the Championship’s quality increasing year on year, a question arises about the hidden talent within the league. Jack Grealish and Emi Buendia, Kalvin Phillips and Neal Maupay—these are all players who have drifted onto the horizons of non-Championship watchers.

But are there any gems who have gone under the radar?

As the summer window opens and clubs look to let in some fresh air, here are some of the players who could make worthy additions to Premier League squads next season.

Frank Lampard’s Derby County have flattered to deceive this season. With a forward line that includes Harry Wilson, Mason Mount and Tom Lawrence, they are front-loaded and have out-attacked teams into submission on a number of occasions, something that saw them over-perform their xG output, particularly in the latter stages of the season.

Derby’s precocious trifecta are not solely responsible for their impressive late surge, though. Jayden Bogle, playing right back, has played an integral role in the side’s progress down the field.

Bogle also finds himself in dangerous areas on the field: last season, he managed 0.07 pull-back passes per 90 minutes—the third highest number for defenders—as well as winning 0.04 penalties per 90 minutes—a production that puts him at fourth on the list of defenders.

But this attacking prowess does not come at the expense of defensive solidity. Bogle attempted 2.57 tackles per 90 minutes, completing 1.57 of them. Both of these figures put him within the top 15 for defenders in the Championship.

At 18 years old, Bogle is young to have 3,665 Championship minutes under his belt. In that time, though, he has more than demonstrated that he can hold his own amongst much more experienced players.

It’s been a disappointing season for Forest. Challenging for the playoff places at the halfway point, they fell away after Christmas, eventually finishing midtable.

Despite this second half downturn in form, Joe Lolley was a consistent performer for Forest, being their most potent chance creator from his position on the wing.

Lolley is excellent on the ball. Through the course of the season, he attempted 189 dribbles, being successful in 111 at a completion rate of 58.7 per cent. Per 90 minutes, this translates into 4.8 dribbles attempted and 2.82 completed: the second-best numbers in the league for midfielders.

This on-ball ability saw him create 0.4 big chances per 90 minutes, a rate of production that saw him pick up 11 assists across the course of the season.

In the end, he picked up 28.2 per cent of his team’s assists for the season. Considering Forest finished 9th in the table but were 14th in terms of the number of assists, it’s clear how important Lolley was to the side.

Jarrod Bowen already has Premier League appearances under his belt. The problem is, there are only seven of them and they came in the season in which his side were relegated.

Since then, though, Bowen has gone on to be an important member of the Hull City squad. Playing wide right, he has been a vital source for Hull when it comes to goal production, scoring 22 at a rate of 0.5 per 90 minutes.

However, Bowen is not simply a goal provider. He also performs a decisive defensive role for Hull, boasting the best record for strikers winning possession in the defensive third. He won possession 104 times in his own team’s defensive third at a rate of 2.37 possessions won per 90 minutes. 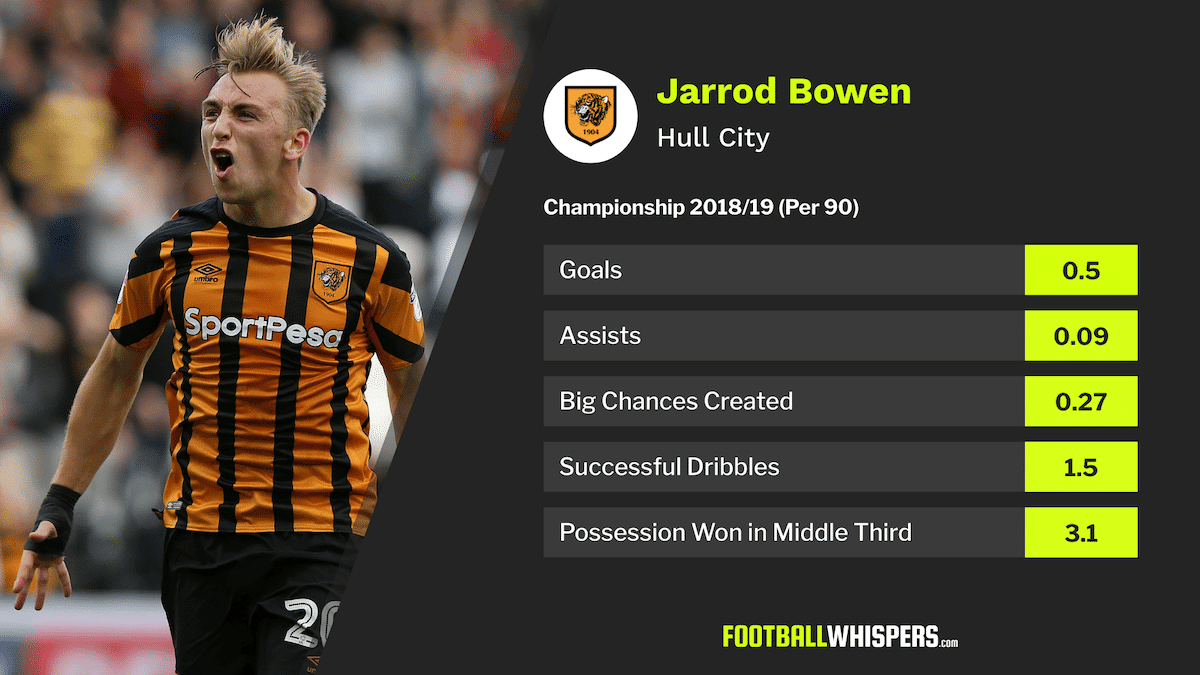 This output continued in the middle third. Bowen turned over possession 136 times in the middle of the field—again more than anyone.

With Premier League clubs always on the lookout for attacking players who perform a defensive duty, Bowen fits the bill perfectly.

Considering he moved to Bristol City from Ipswich Town last summer for a fee of £3.5million, it seems odd that Adam Webster is still overlooked when it comes to defenders in the Championship.

In the event, Webster proved that he could perform at a side challenging for promotion just as much as he could at a side who were battling against relegation.

When Webster was at Ipswich, they were 20th in the league for passes attempted, passes completed and passes in open play. By contrast, Bristol City found themselves 12th in the league this season for the same stats.

The 24-year-old centre back has slotted into the City back line. While his stats do confirm him to be strong in the air and in the tackle—second in his position for aerial duels won and first in his position for defensive duels won—he has also not been phased by the uptick in passing that he has experienced at his new club.

This proficiency on the ball, matched with a capacity to defend, could make Webster an attractive commodity amongst Premier League teams. 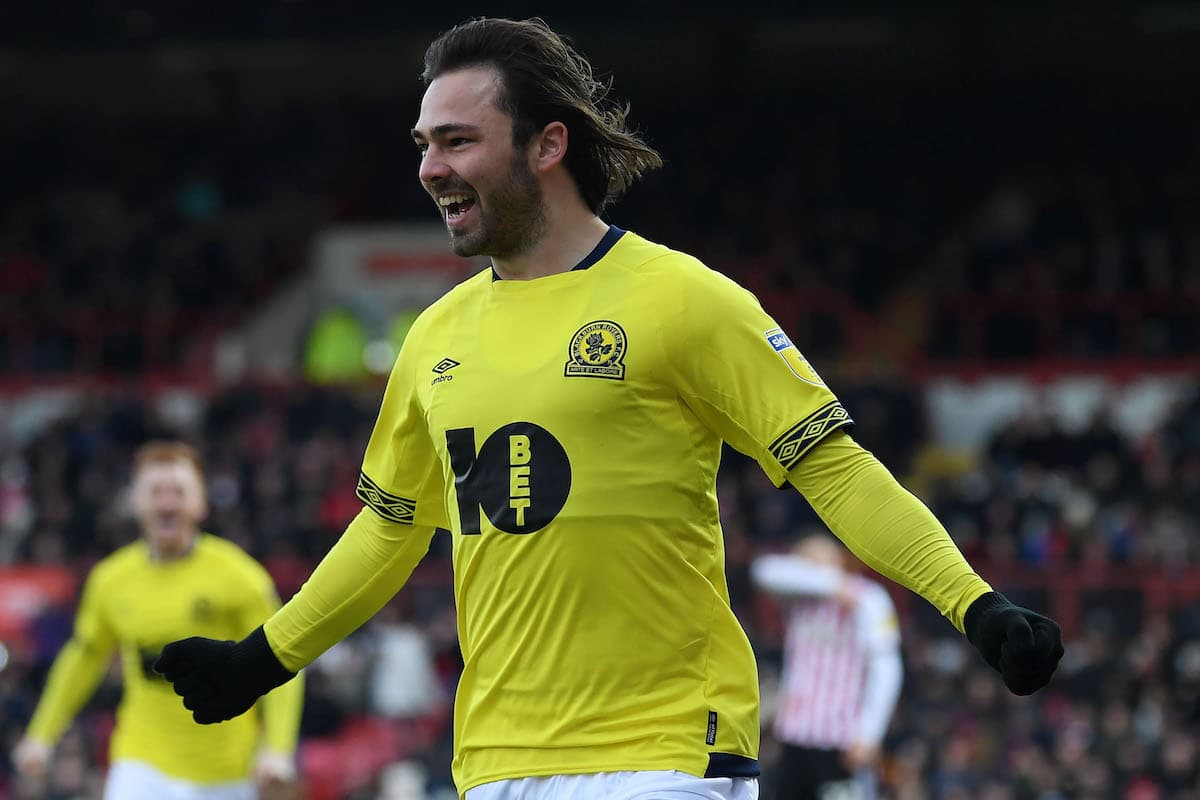 At 25 years old, Bradley Dack has been around enough to make it onto people’s radars. Given that his club, Blackburn Rovers, have had a couple of poor seasons, Dack has failed to live up to the billing that he had when he moved from his former club, Gillingham.

Dack’s underlying numbers are fairly unremarkable in the main. However, there is an area in which his figures can’t be ignored: goalscoring. Which isn’t to say that he is prolific: with 15 goals to his name last season, Dack was the second-highest scoring midfielder in the division.

Dack, though, is remarkably efficient in his decision making in front of goal. His goals all came from within the box. Of these, 11 were big chances. Of the 116 shots he took, 54 of them were from the centre of the box: the highest figure for a midfielder in the Championship. He also took the third highest number of touches in the box for a midfielder: 174 at a rate of 4.53 per 90 minutes.