Prior to West Ham United’s win over Huddersfield Town – their first of the Premier League season so far – there was talk that they might move to replace Slaven Bilić with Maurizio Sarri. While this speculation wasn’t necessarily huge news in England, it was big in Italian football circles.

Sarri is the head coach of Napoli, one of Serie A’s top teams. He is also widely regarded as one of the finest coaches to come out of the peninsula, a land renowned for the consistency and quality of its managerial talent.

After a superb spell with Empoli, the 58-year-old has led the Partenopei into regular title contention. In his first season in charge they finished second, nine points behind first place. In his second campaign they finished third, five points behind eventual champions Juventus. They achieved this while playing some of the most brilliant football on the continent.

As a result, the rumours linking Sarri to West Ham seemed silly, and he moved to clarify his position before his side’s Champions League opener against Shakhtar Donetsk on Wednesday night. Addressing the link, he told the press: “Right now that is the furthest thing from my mind. We are playing in the Champions League and that is enormously satisfying. We’ve got a fascinating season ahead of us and I am concentrated only on that.”

And concentrate Sarri should, for his Napoli could be on the verge of their defining season. After two years spent chasing Juventus domestically and losing out in Europe, it’s high time they added silverware to the style.

How does Football Index work? by FootballWhispers

Their Champions League draw is a tough one, with Manchester City and Dutch champions Feyenoord also in Group F. However, City boss Pep Guardiola is fully aware of the threat posed by the Italian side, saying: “We're going to face the team who played the best football in Italy. I'm not talking about winning – I like to watch the teams who want to play.

“In Italy, where the culture is defensive in the box, they play 40m in front a bit like (former AC Milan boss) Arrigo Sacchi did once. With the ball they are fantastic. For me, and it's just my opinion, they are one of the three best teams right now in Europe playing football.”

WHAT MAKES NAPOLI SO ENTERTAINING AND EFFECTIVE?

The most eye-catching aspect of Napoli’s play is the way they attack. They relish possession, something that can be highlighted statistically by the fact only four teams in Europe’s five ‘major’ leagues – those teams being Barcelona, Borussia Dortmund, Paris Saint-Germain and Manchester City – complete more passes per game.

However, a simple number of passes made per game figure doesn’t do justice to such an exhilarating outfit. More valuable, and interesting, is the way they use their possession of the ball; rather than slow retention or sideways circulation, they look to penetrate the opposition at every opportunity. 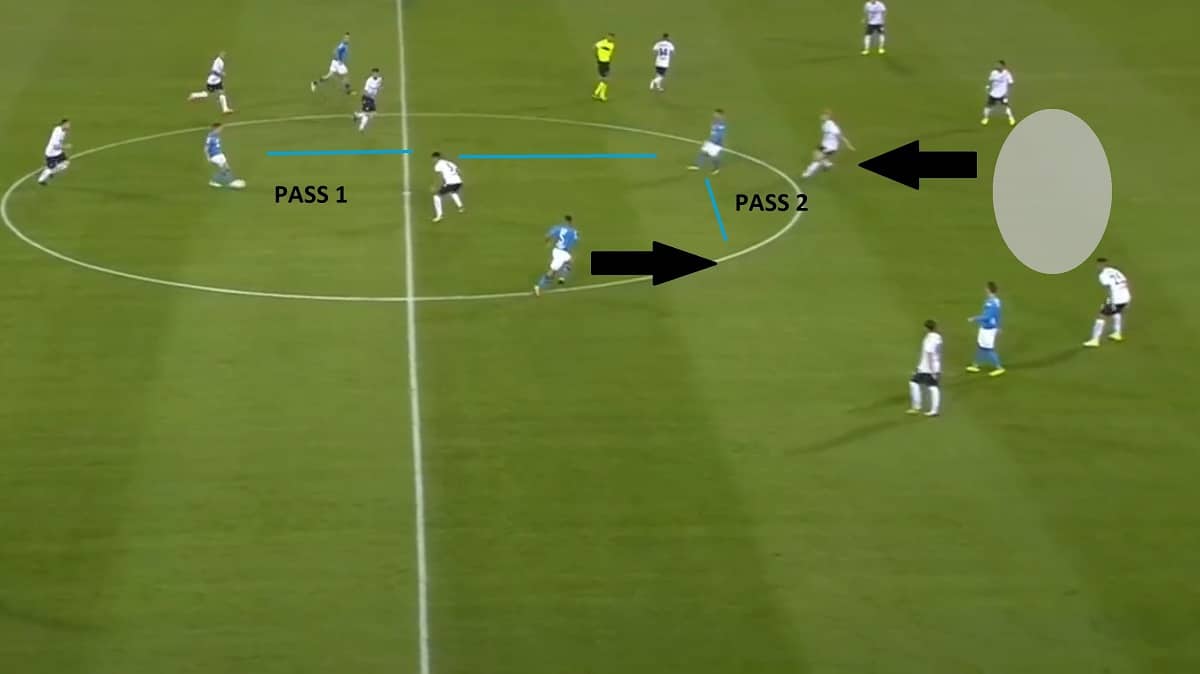 Indeed, the only time Napoli consistently look to go sideways is in the situation seen above. They play high-speed possession, giving the opposition little time to get set and defend against it. This involves plenty of one-twos, wall-passes and third-man runs.

In the above graphic, taken from their 3-0 away win over Bologna in league action last weekend, their deep-lying playmaker, Jorginho, has the ball. Ahead of him, Dries Mertens drops deep from his central attacking position, dragging his marker with him and creating a gap in the opposition back line.

Anticipating the first pass, central midfielder Allan makes a third-man run off the ball. While he isn’t involved immediately, his movement will create an obvious second pass. Mertens goes on to lay the ball off to him with one touch, giving the Brazilian an opportunity to drive forward into space, breaking the opposition midfield line in the process.

This is the Napoli way. Vertical passing, done at a high tempo, disrupts opposing defensive schemes, taking individual markers out of the game, and creates attacking opportunities. However, they don’t always focus on the middle of the pitch.

Their left wing is perhaps the most dangerous area of the team. This is not only due to the presence of some of their best players, but because of the way in which these players combine with one another. The below graphic is an example. 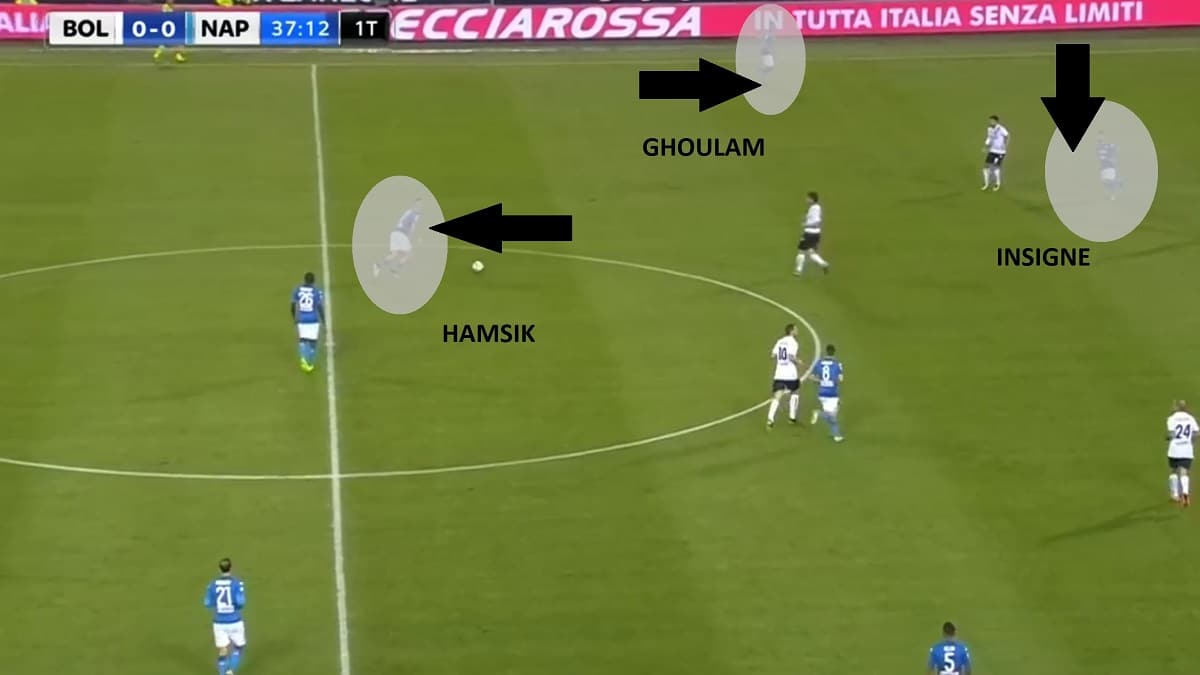 This is just one example of the rotations of position the trio perform during a match; there are a number of other combinations that they undertake to open up the opposition’s defensive structure and create angles for forward passes into more advanced areas.

Napoli are also one of the few sides whose defensive game is almost as entertaining as their attack. They take up an extremely high defensive line, often on or just beneath the halfway line, as a means to support high pressing. Their pressing is focused on the ball, as they look to cut off the opposition ball-player’s options at every turn. 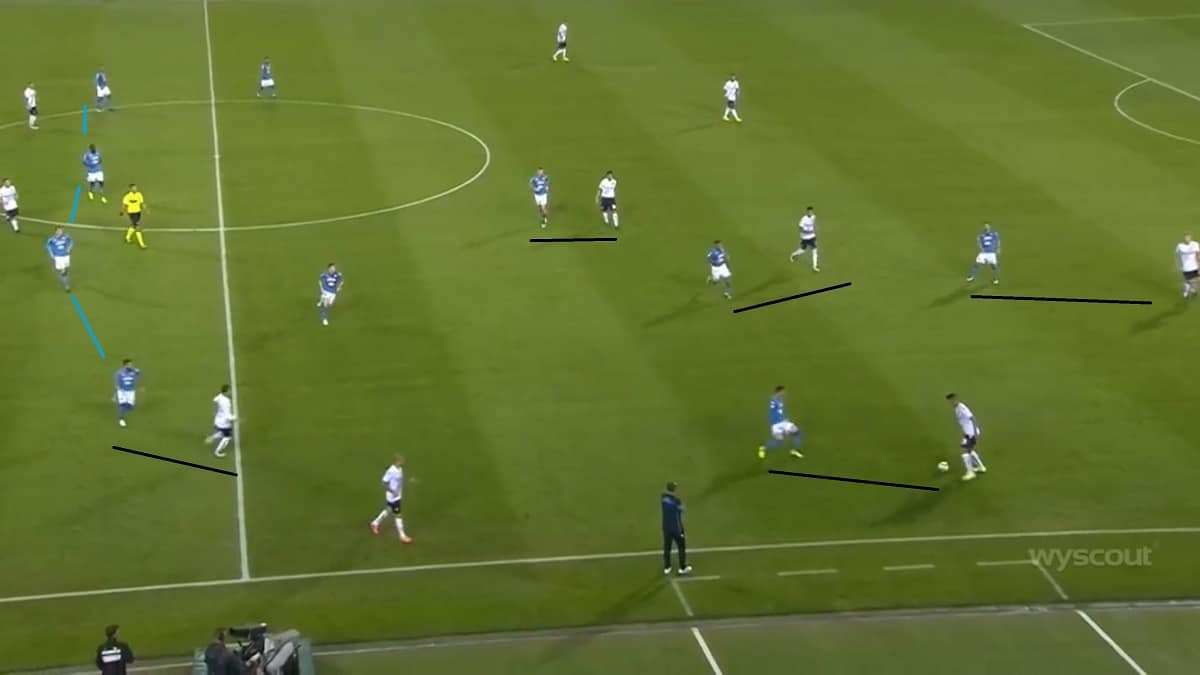 This is depicted in the above graphic, where the Bologna left-back is unable to access a nearby team-mate due to the presence of six Napoli players in close proximity to him, each covering his nearest passing options. The high defensive line Sarri prefers is also seen, congesting the space for Bologna to utilise.

This approach is high risk, but it is also high reward. In pressing so comprehensively so high up the pitch, the Partenopei are able to limit the danger of opposition attacks, ensuring they take place far away from their own goal. They are also able win the ball back high up the pitch, allowing for instant counter-attacking.

Napoli’s build-up starts from the back, where Kalidou Koulibaly’s technique and willingness to drive forward are maximised. The Senegalese centre-back is one of the finest in the world in his position, combining outstanding physical traits with remarkable composure and ball-playing capability.

Often when opposition sides take up a deep defensive approach, he is the man tasked with attacking them to draw out markers and free up his more advanced team-mates. And, on occasion, he will simply drive forward into the final third himself.

Reported Manchester United target Hamšík is the captain and the club’s all-time second-highest scorer, lying just two goals behind the iconic Diego Maradona. The Slovakian midfielder will undoubtedly surpass the Argentine’s tally of 115 in all competitions this term, further cementing his legendary status at Napoli.

Beyond the goals, he is Sarri’s orchestrator of attacks. His movement is intelligent and well-timed, his passing is succinct but incisive, and his ability to create and take chances is equalled by few other central midfielders in Europe.

Ahead of Hamšík, Insigne and Mertens are a devilish, diminutive attacking duet. Neither are static throughout a game; they both move constantly in order to get on the ball and make things happen.

The latter was Napoli’s top scorer last season, hitting 28 goals in Serie A and a further five in the Champions League. His increasing productivity can be attributed to his being re-deployed as a striker following the sale of Gonzalo Higuaín to Juventus last summer; previously he was seen as a winger or attacking midfielder.

Insigne is the local hero, the only Neopolitan in the starting XI. It is apt, therefore, that he has a better understanding of his team-mates than most other individual footballers can boast.

As well as his combinations with Hamšík and Ghoulam, he has an almost telepathic connection with José Callejón. When he cuts inside and distracts the opposition defence, the Spanish right winger will make his blind side run into the penalty box to receive a ball over the top.

Napoli are thrilling to watch, but they are also highly effective as a team. When they begin their Champions League campaign against Shakhtar, Europe, and in particular Manchester City, had better take note.