Welcome to the Champions League wasteland, where it's cold, dark and club football's most illustrious tournament is wrapped up in its bed until February.

Let's be honest. The week goes in a lot faster when we have Europe's best slugging it out on Tuesdays and Wednesday and the Europa League playing the supporting role on Thursday.

But, until UEFA's club showpiece returns at the end of winter, we can only reflect on what we have seen to this point.

As you may or may not already be aware, we chose our Champions League group stage best XI.

But while it was a joy to behold Lionel Messi dancing around Spurs defenders and Thiago Silva celebrating tackles like they were goals, we at FW headquarters were also struck by some of the players who exceeded expectations.

We expect greatness from Messi, Cristiano Ronaldo and Neymar, sure, but we've decided to showcase some of the group stage's surprise packages.

An American catching the eye for a Belgian side, Horvath didn't concede a goal in 270 minutes of Champions League action. Although Brugge didn't come close to progressing to the next stage, the 23-year-old made a significant impression, particularly in the final group game in which he produced a string of acrobatic stops to deny Atlético Madrid.

Erik ten Hag's youthful Ajax side have been one of the most refreshing teams to watch in Europe this year.

Much of the attention on the Amsterdam club has understandably focused on star duo Matthijs de Ligt and Frenkie de Jong but several of their teammates played an important role in securing qualification from Group E, too.

Mazraoui has been a revelation to most, scoring an equaliser in the 1-1 draw away to Bayern Munich before netting a crucial winner deep into stoppage time to see off Benfica.

The former Manchester City defender has enjoyed a productive campaign, helping Schalke seal their spot in the next round by finishing second in Group D behind Porto.

The 25-year-old Serbia international formed a solid understanding with the evergreen Naldo, now 36, to help the German side ship just four goals across the six games. There is a possibility Nastasić will face former employers City in the round of 16.

With 110.5, Akanji comfortably averages the most accurate passes per 90 minutes of any player and, with an overall accuracy of 95 per cent, his steady influence at the back has been key in building attacks for Lucien Favre's slick Dortmund outfit.

The 23-year-old Swiss defender has slotted seamlessly into Dortmund's back-line since arriving from Basel in January and has formed an impressive partnership with summer recruit Abdou Diallo.

The Argentine was in the headlines for the wrong reasons on Matchday 6 after having been on the receiving end Thomas Müller's insane kung-fu kick.

However, that shouldn't overshadow the more positive aspects of his Champions League tale this season. The 26-year-old even recovered from Müller's assassination attempt to net a 95th-minute equaliser and earn a 3-3 draw with Bayern.

Tagliafico was excellent in the 1-1 draw with Benfica, too, winning more tackles (four) and duels (ten) than anyone else and stole the show in the 3-0 win over AEK Athens with two well-taken goals. Thoroughly deserving of his spot.

The fact Kimmich impressed for Bayern is no real surprise. That he did so as a makeshift central midfielder is. With Rafinha at right-back, Niko Kovać has experimented with deploying the German as a deep-lying, playmaking midfielder.

And the 23-year-old has adapted well, contributing two assists in the 5-1 win over Benfica. However, while many Bayern fans feel a double-pivot of Leon Goretzka and Kimmich is not sustainable in the long-term, the way he adjusted to a tough new role is a measure of his versatility and intelligence.

The dynamic Frenchman impressed for Les Gones in the Europa League last term but made the leap to the Champions League in style. A reported £90million Manchester United target, the 21-year-old caught the eye in the two games against Manchester City and scored in both encounters with Hoffenheim.

An agile operator, Ndombélé added real thrust to Lyon's midfield, completing 15 take-ons across his six appearances. One to watch in the next round for sure.

Another one of Dortmund's standout performers, the Portuguese midfielder scored four goals in four European outings, two of which were from the start, and sealed top spot in Group A with a brace away to Monaco.

The 24-year-old tops the charts among midfielders in goals per 90 (1.63), scoring attempts per 90 (3.63) and touches in the opposition box (7.36). He'll hope to carry this momentum into the next stage as Dortmund threaten to upset the continent's established order once again.

With just three points in six games, Hoffenheim tanked in this year's Champions League. Kramarić, however, did his reputation no harm, with five strikes and an assist, meaning he was directly involved in over half of his side's goals.

The Croatian's opener against Manchester City this week was the ninth game in a row in which he has scored for club and country. Despite his wonderful form, though, Julian Nagelsmann's side are seventh in the Bundesliga and couldn't secure Europa League football for after Christmas.

From narrowly avoiding relegation to the Championship to starring on the biggest stage, it's been quite a turnaround for Tadić.

The Serb left Southampton for Ajax in the summer and hasn't looked back since, with his five goals and two assists helping to secure qualification.

His brace against Bayern brought him to 15 in all competitions this season, bringing him level with the whole of the Southampton squad. What a stat.

Dusan Tadic and Southampton have both scored 15 goals this season

With five goals and an assist, Marega has led Porto's line impressively. The Mali international's goals helped the Portuguese champions comfortably clinch top spot in Group D with 16 points from a possible 18.

His hard-working displays make him a fan favourite at the Estádio do Dragão. It will be interesting to see if he can replicate his killer touch as Porto try to reach the last eight for just the third time since they won it under José Mourinho in 2004. 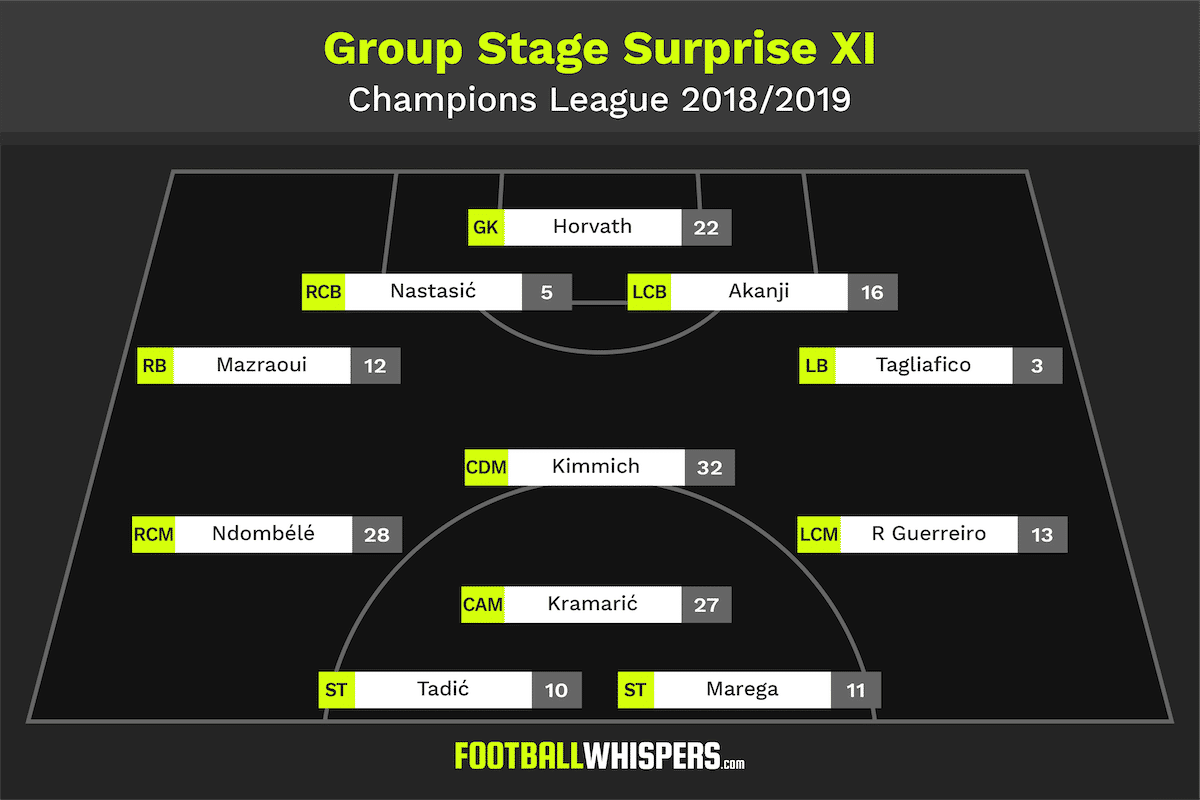