Many a legend are born through the unlikely. More legendary feat find their inception through the impossible. The impossible task. Right the way back to the stories of the Greek Gods do we hear of mission impossible. Mission unlikely and mission probably-won’t-happen. Stories in football often develop this aura around their existence. Biblical tales due to live on as long as the ball is being kicked. A tale as old as time.

In football, to inflate a performance is second nature. The very nature of the beast is to develop story lines and chief protagonists. The unlikely hero, if you will. The performance of so many Premier League stars can usually be propelled to unreasonable heights all in the name of selling the British game. There is a difference between an ever-lasting story and a never-lasting impressive season. This difference is such: time.

Players regularly come and go. Their names are remembered but they have to be a different class of player for fans to remember their spirit. That “I was there when..” memory that football fans love to remember. The special player needs to be a cut above the rest. The most special of diamonds within the grandest of jewellers. Special games though, afford a new level of memory. A new kind of romance.

Games of football lend themselves to the exciting. The money poured into the game now means that goals are scored and goals are conceded and teams can be involved in their own type of classic. The classic match. The thing that keeps managers, fans and teams going. “Oh, it was a classic. That game will be remembered forever” a fan will say. Until the next game. The next classic.

Matches themselves will often be said to “follow a script” – like a predetermined, written format leaving playable football in its wake. One minute the script is written, the next it is followed. No matter what happens, “the script” is always mentioned.

The writer of the script is meant to always be the favourite. The team most likely to become victorious. Managers who announce a predicable team is said to be sticking to the scripts, and when the favourite in the match wins, the script is adhered to. Predictable, allowable, controllable. The script is written and the actions will follow. 25th May 2005, however, the script was left in tatters. 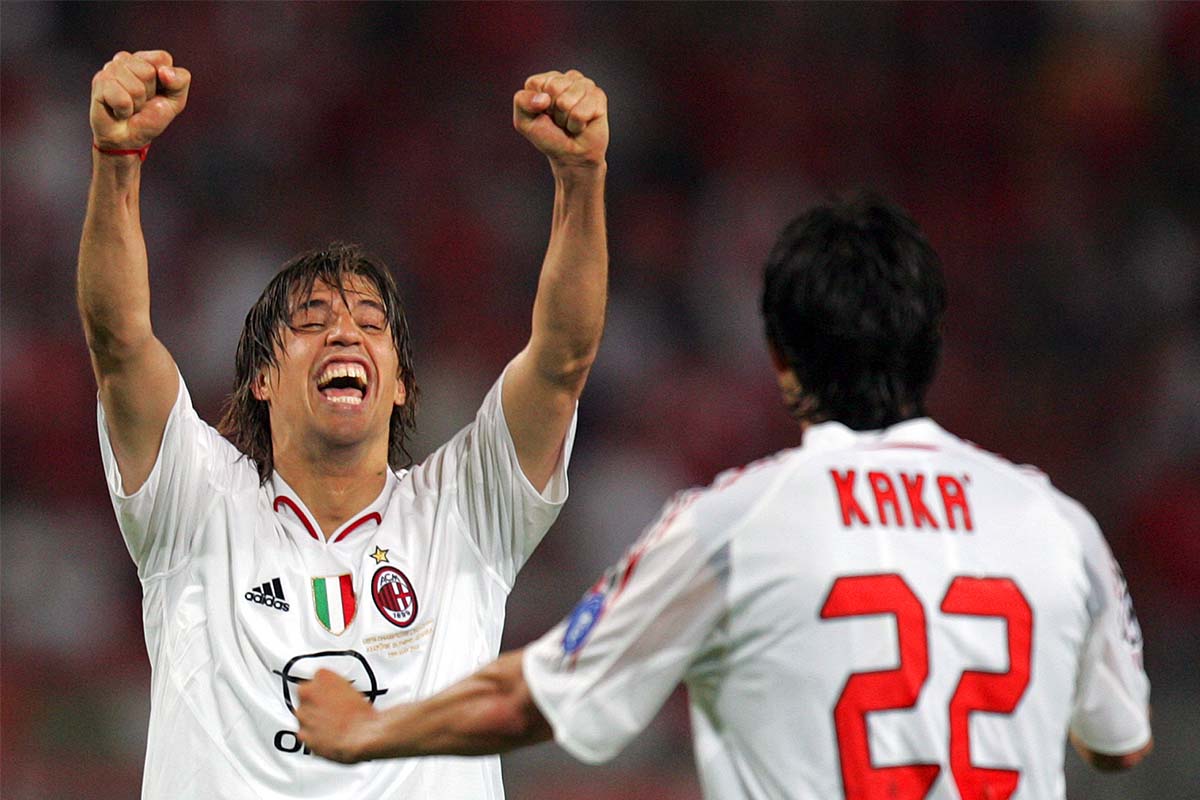 AC Milan of this era were one of the greatest club teams of their generation. Defensively excellent and with attacking flair, their team this day – the day of the Champions League final – was full of household names. Paolo Maldini, the greatest defender in the world and an Italian superstar marshalled their defence. Gennaro Gattusso was in midfield, with all the bite and determination that brought him the accolades and reputation of a dog of war. Andrea Shevchenko was the most feared striker in the world. A legend in his home country of Ulkraine, the forward was soon to complete an earth-shattering transfer to Chelsea. They aren’t even the half of it. Dida, Kaka, Hernan Crespo and Clarence Seedorf were amongst the star names on the team sheet. Ask any fan across the globe at that time and AC Milan were the best team in the world. And their opponents? They weren’t even the best team in their region.

Liverpool FC had fallen on hard times. As a club they were still famous the world over. The treble-winning season of 2001 re-adjusted the light in their direction, but the flicker that followed them was short lived. Former manager Gerard Houllier attempted to bring the title back to Liverpool and in truth came close. In his time at the club he had started the revolution. A European revolution. From training and transfers, to tactics and excitement. The club had become European in feel yet increasingly slim in European silverware. His leaving allowed the club to take another step into the European. Hiring well thought of manager Rafa Benitez was to usher in a new era at Anfield.

Little did the club know but this new era was to start, in essence, that very season. 2004/2005 for Liverpool was a year of domestic bore and global excitement. Peaking at the Champions League final in 2005.

By half time, Liverpool were 3-0 down. They were low on confidence and morale, but also low on goals. Against AC Milan. One of the world’s greatest. It wasn’t a case of if Liverpool lost the game, but when. No team could come back from this.

At the start of the second half, Liverpool made a change. Dietmar Hamman was brought on in place of Steve Finnan, a move the added an extra man in midfield and a man cutting out the space in front of a now diminished 3-man defence. 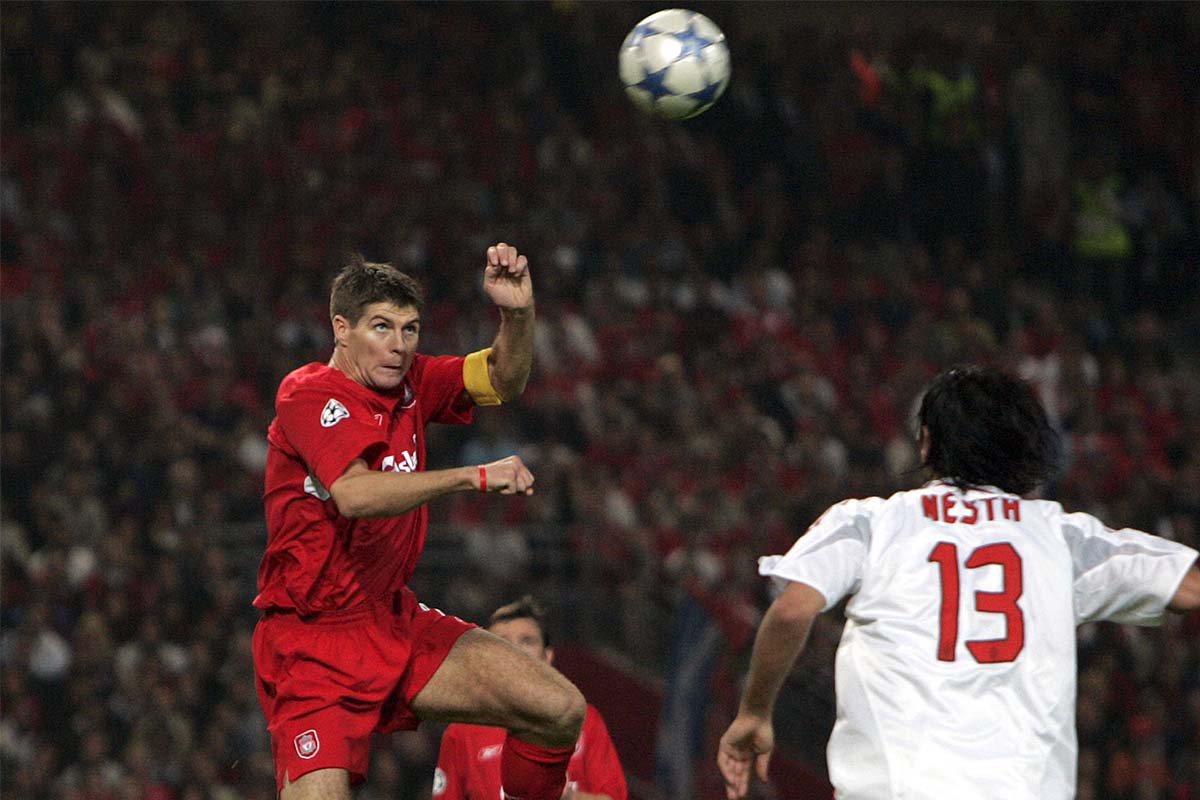 After 54 minutes, and a chance for both teams, Liverpool defender John-Arne Riise launched two balls into the box. One hitting the first man, the second hitting the head of Steven Gerrard. Gerrard’s header loops across and over Dida to bring the score back to 3-1. Ask anyone in the ground apart from one man, and they all will be thinking the same thing. “That’s a little bit of pride back” – one man who thinks otherwise, though, is Liverpool captain and talisman, Steven Gerrard. He roars the crowd into action and blasts the players into life. This game isn’t over. Not by a long stretch.

Vladimir Smicer had been a nearly man for Liverpool. An excellent trainer and an average match player, the midfielder was, during this game, making his final appearance for the Merseyside club. His final act was as important as any by any player since. 3-2. A low, swerving shot to the ‘keepers right and the game is back within Liverpool’s grasp. Milan were in a daze. Like a fighter who had been caught with a bright right-hook, they were seeing the stars. When finally, the biggest of moments arrived.

Steven Gerrard bursts into the box. Held back by Gattuso, Liverpool’s number 8 looks for the penalty, that he does. But he also finds it. Finds it and gives it to Xabi Alonso. A player who can put a football on a spot the size of a pound coin. The most accurate passer of a ball in Europe. Who accurately finds Dida’s palm, only to place the rebound high into the net. 3-3. What had happened? A legend had happened.

Other things happened that night. The penalties. The Saves, blindly, from Jerzy Dudek during extra time. Jamie Carragher’s incredible reflexes whilst staring down the barrel of cramp and of course the celebrations at the end of the game. The celebrations and the electricity.

The European Cup will always be the biggest game on the most incredible of stages, but that night, 25th May 2005, Liverpool defied the odds, the script and their status of underdogs to bring back their 5th European Cup trophy the their great city. Fans of football and fans of the club will hope for more of the same, but chances are this is the greatest game some of us will ever see. Istanbul 2005 – the unlikeliest of triumphs.