In an attempt to convince Roy Hodgson to extend his stay at Selhurst Park, Crystal Palace are prepared to sanction a big-money move for Fedor Chalov when the transfer window reopens in the summer.

The Eagles missed out on Jarrod Bowen in January while a deal for Nathan Ferguson broke down over his medical. Reports have since emerged claiming Hodgson is unhappy with the lack of investment in his squad. The former England manager is out of contract in the summer and he wants assurance the club are looking to improve the team before penning a new deal.

Goals have been a problem for Palace this season. No team in the Premier League have scored fewer times (22) and this is largely why they find themselves just six points clear of the relegation zone. The lack of potency in the final third means all the good work done in the defensive third is undone.

Hodgson has made Palace tricky to beat. The club need to show their appreciation for this in the shape of a £25million striker. The Premier League side tried to land Chalov during the summer but the 21-year-old remained in Russia.

The Daily Mail claim director of football Dougie Freedman remains a fan of the former Chelsea transfer target, and an increased offer could see them land the forward.

While the two-cap Russian isn't the most prolific, he does score goals. He's wasteful at times, underperforming his expected goals per 90 average by 0.21. But that stat highlights the fact he's regularly getting into dangerous areas. Eventually, his finishing will improve to make the most of those chances. 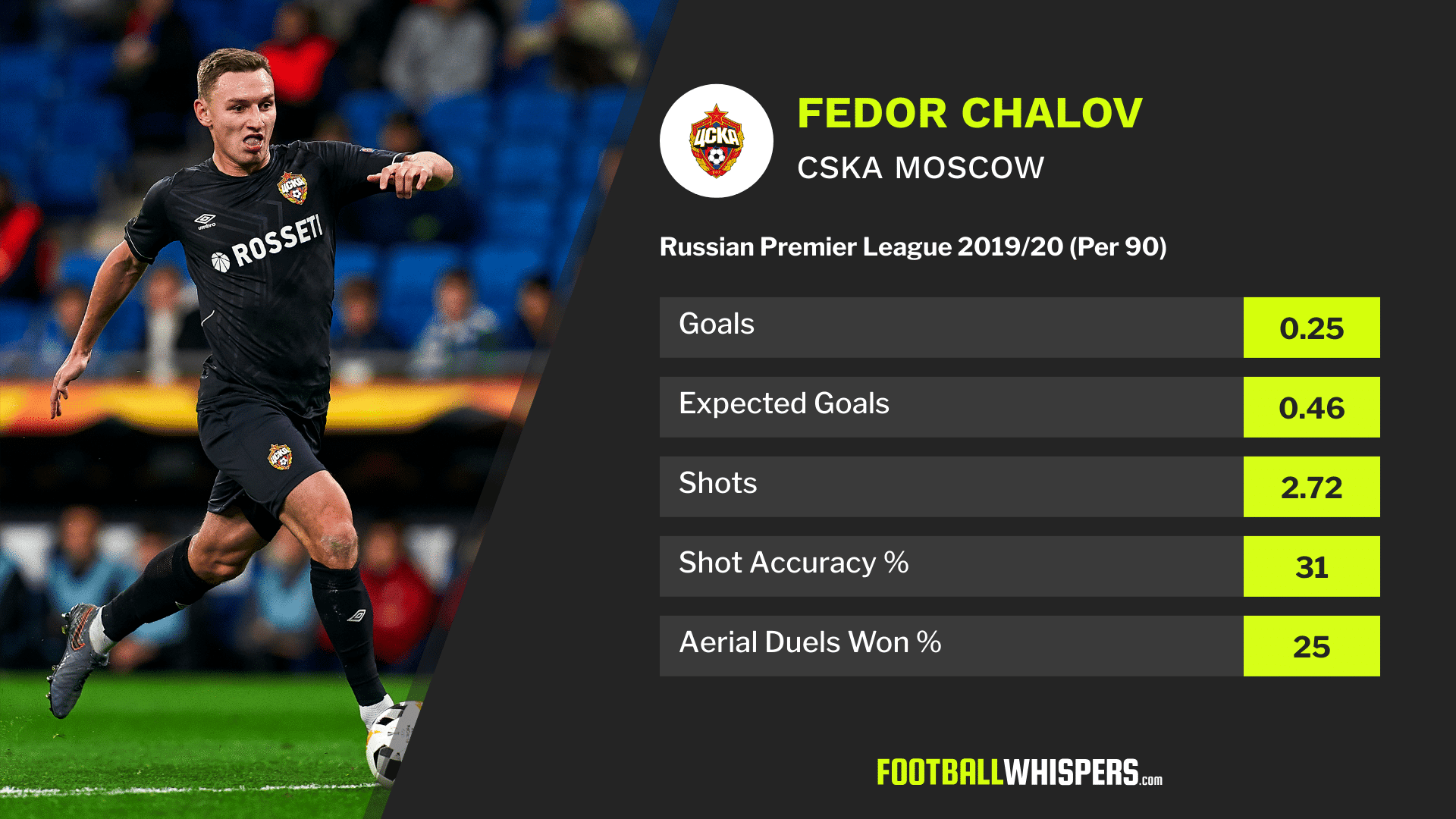 Furthermore, his averages show he isn't a volume player. He's having just 2.72 shots per 90 this term. The top strikers in England have north of four. They're not clinical and instead rely on a constant stream of opportunities. Chalov is dangerous despite a limited number of efforts. A positive sign for a club not battling at the Premier League summit.

What makes Chalov such an intriguing target, however, is the variety of goals he scores. He's unpredictable and this makes him an even greater threat. 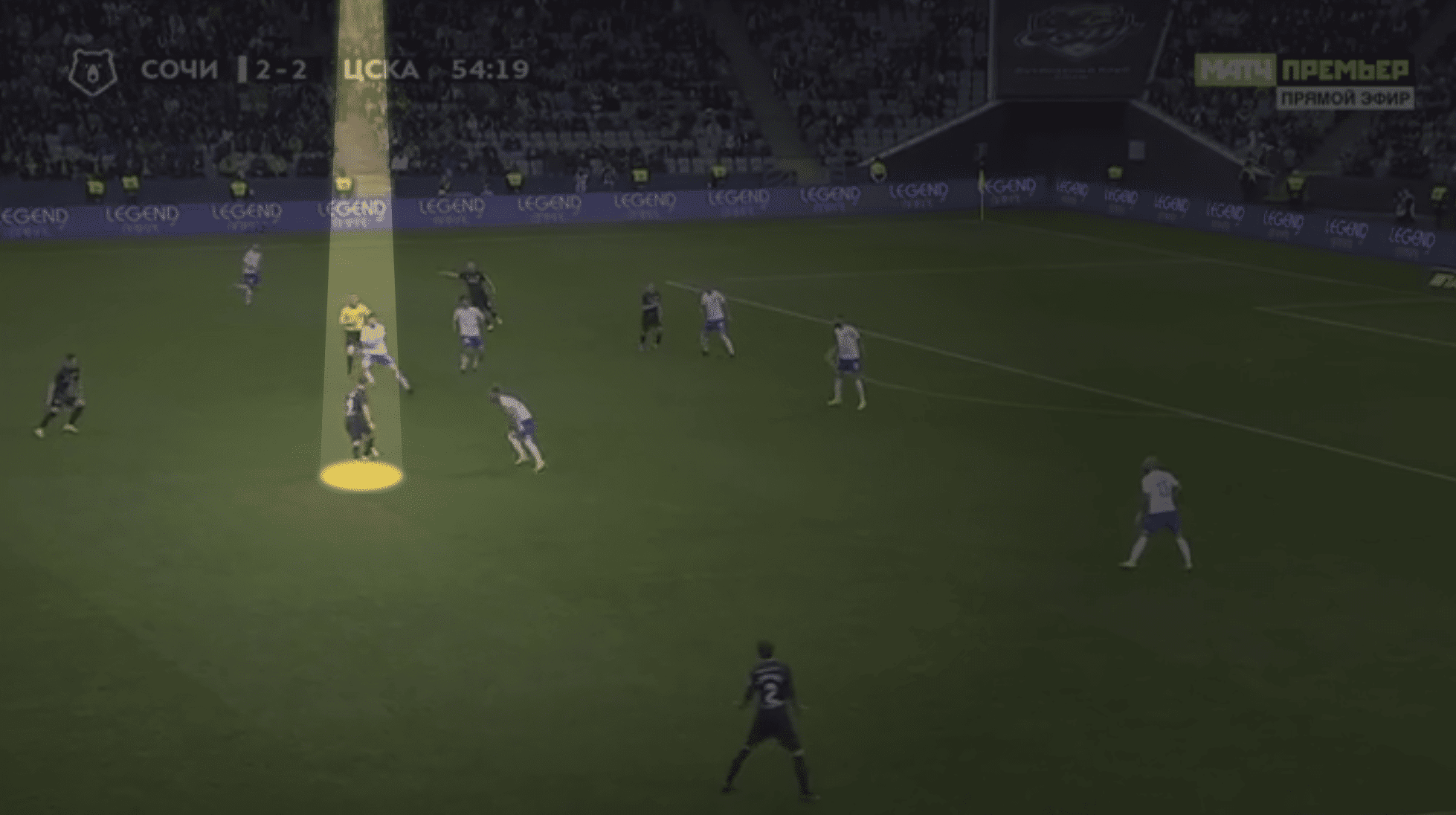 In the still above, Chalov is highlighted and he's dropped deep to collect the ball. He quickly turns and lays the ball off to a team-mate. 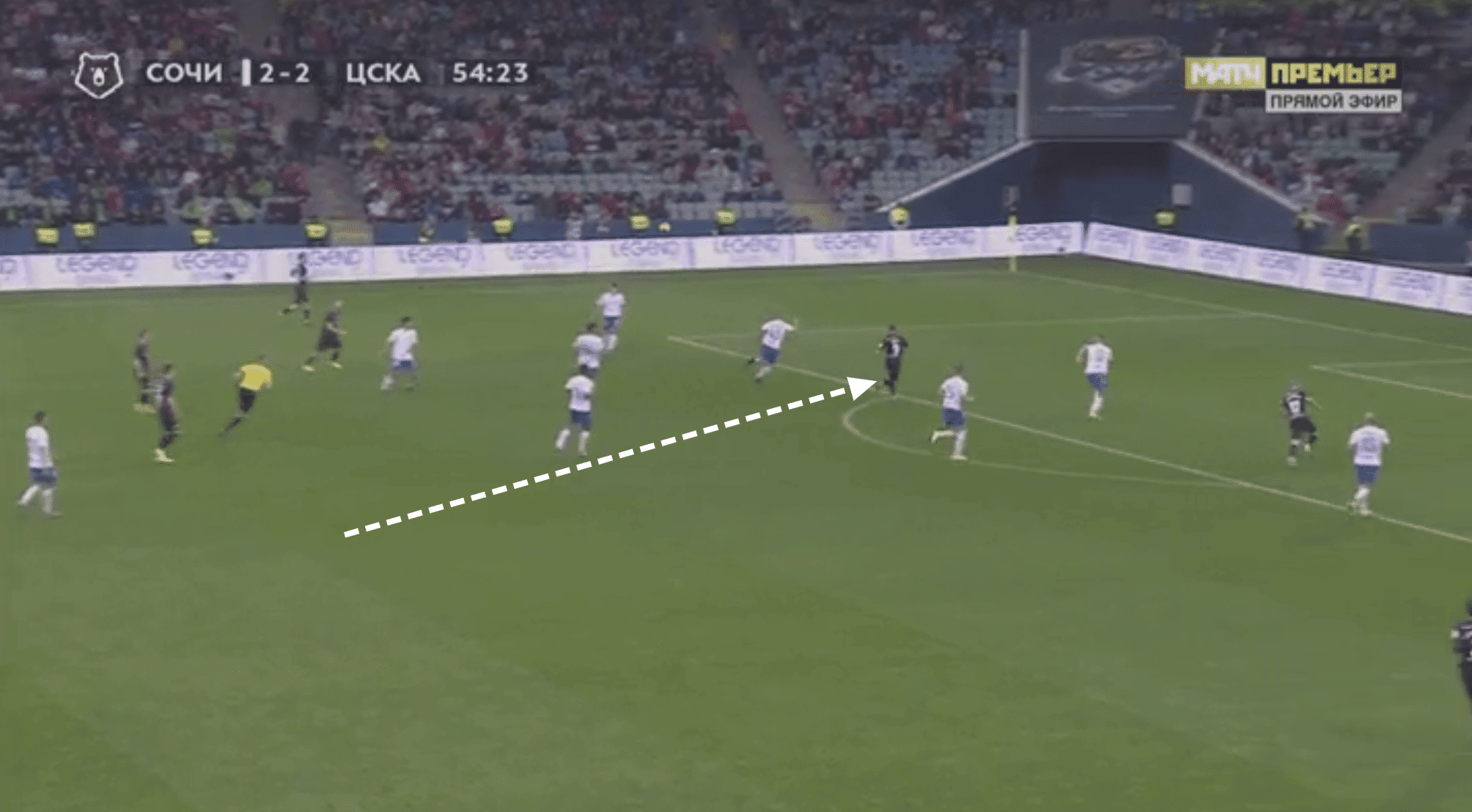 He then darts into the penalty area, exploiting the space and positioning himself intelligently. He receives a floated ball over the top and from an obscene angle he manages to lash home a left-footed volley. 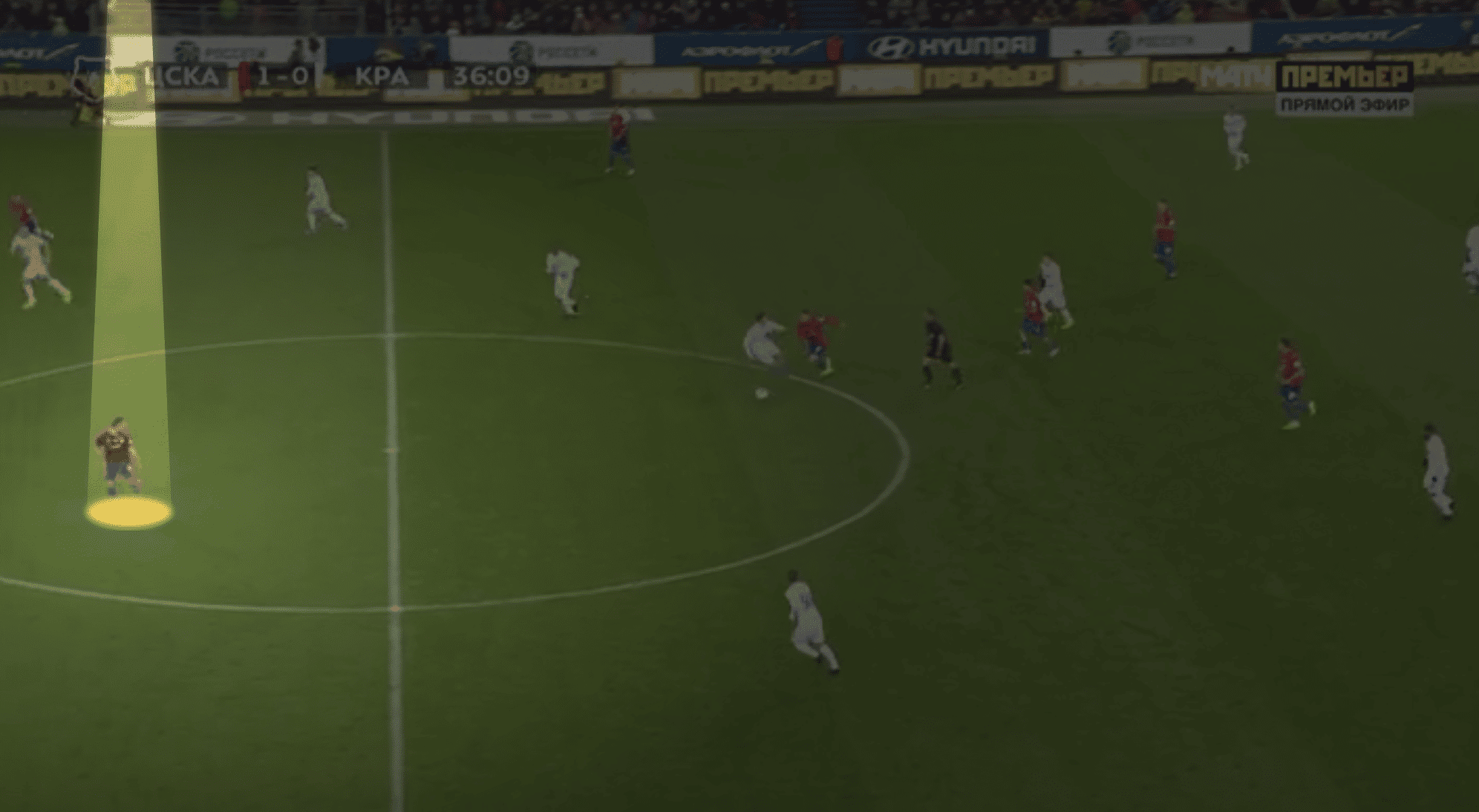 This time around, Chalov is in the centre circle as CSKA Moscow look to break quickly. He peels away to the left, freeing up space for the man in possession to carry the ball forward. 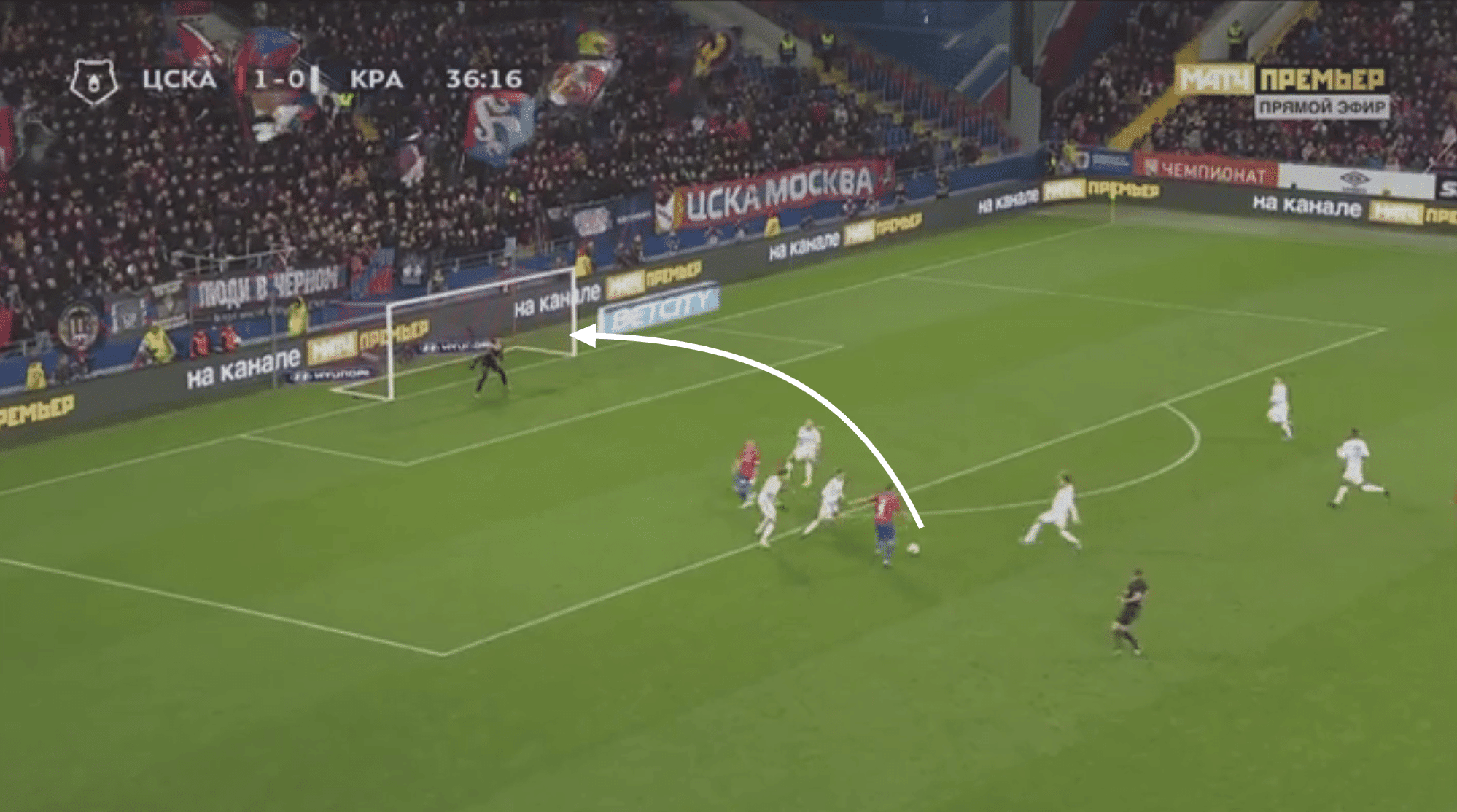 The pass reaches his feet and he slows play down. He threatens to go on the outside but snaps back onto his right foot and cuts inside. Chalov faints to shoot and this dummy creates the situation you see in the picture above. The 21-year-old then curls home a superb effort into the bottom corner and like that, CSKA double their lead.

The two goals highlighted show the variety Chalov brings to a team. He can score volleys on his weaker foot, bend the ball home from 20 yards, poke efforts past goalkeepers from inside the six-yard box and nonchalantly glance headers home from close range.

Not only would he add goals to this Palace side, he'd also free up Wilfried Zaha. Right now, teams know the former Manchester United man is the Eagles' main threat and they regularly double up on him. Adding another threat, and an unpredictable one at that, will decrease the focus on the Palace No.11 and that can only be a positive.

With or without Hodgson, the club should be adding Chalov to their ranks. He could be the player to help them cement their place as a mid-table team in the English top-flight.