Metz vs. Nice Crystal Palace vs Liverpool Arsenal vs Burnley Lyon vs Saint-Etienne Watford vs Norwich

It's not often a player with one Premier League start leaves a top-four club to a chorus of dismay. But when Nathaniel Chalobah joined Watford in a £5million deal from Chelsea, Blues fans were unimpressed.

The young midfielder was afforded just five starts in all competitions in the five years since turning professional at Stamford Bridge.

But his potential was clear. And, when the Blues allowed the rangy midfielder to leave the club in the same window they spent £40million on Tiémoué Bakayoko, there was palpable discord from Chelsea supporters.

At 22, Chalobah felt his time at the Premier League champions was up. He'd fine-tuned his game out on loan – first at Watford and then with Nottingham Forest, Middlesbrough, Burnley, Reading and Napoli – but, seemingly, to no end.

Upon returning to Stamford Bridge last summer the expectation was the precocious midfielder would compete for a first-team berth. But Antonio Conte preferred N'Golo Kanté, Nemanja Matić – at the time – and Cesc Fábregas. With some justification, too, as the Blues regained the Premier League title.

Fifteen appearances in all competitions was not what Chalobah had in mind. Nevertheless, Chelsea were keen to keep hold of the Freetown-born midfielder and offered him a new five-year contract, reportedly worth £60,000 per week.

Signing that deal and setting himself up for another five years of competing for honours – albeit as a bit-part player – would have been the easy thing to do. And the sizeable pay packet wouldn't have been unwelcome either.

But Chalobah wanted more than that. He had the gumption to know he was at a make-or-break point in his fledgling career. His next move was crucial.

With talks over extending his deal stalling – as the player tried to secure a guarantee of first-team football – Crystal Palace, Southampton and Watford waited.

Each club represented a step-down in terms of their targets and aspirations. Equally, though, they offered the chance to play regular Premier League football. And that was what Chalobah craved.

In the end, he plumped for Watford, re-joining the club for whom he'd starred on loan during the 2012/13 campaign. The Hornets exploited a £5million release clause in the midfielder's Chelsea contract which hinged on the number of appearances Chalobah made last season.

Naturally, leaving the Premier League champions for the side which finished 17th last season represents a risk. But it's one which Chalobah clearly feels is worthwhile.

After impressing for England's Under-21s at the European Championships this summer – along with fellow Watford recruit Will Hughes – the 22-year-old last week won his first senior Three Lions call-up.

At this stage that has little to do with joining Watford and more to do with Chalobah's performances for Aidy Boothroyd's side in Poland.

The former Chelsea starlet caught the eye of Southgate, his former Under-21 coach, at the European Championships. 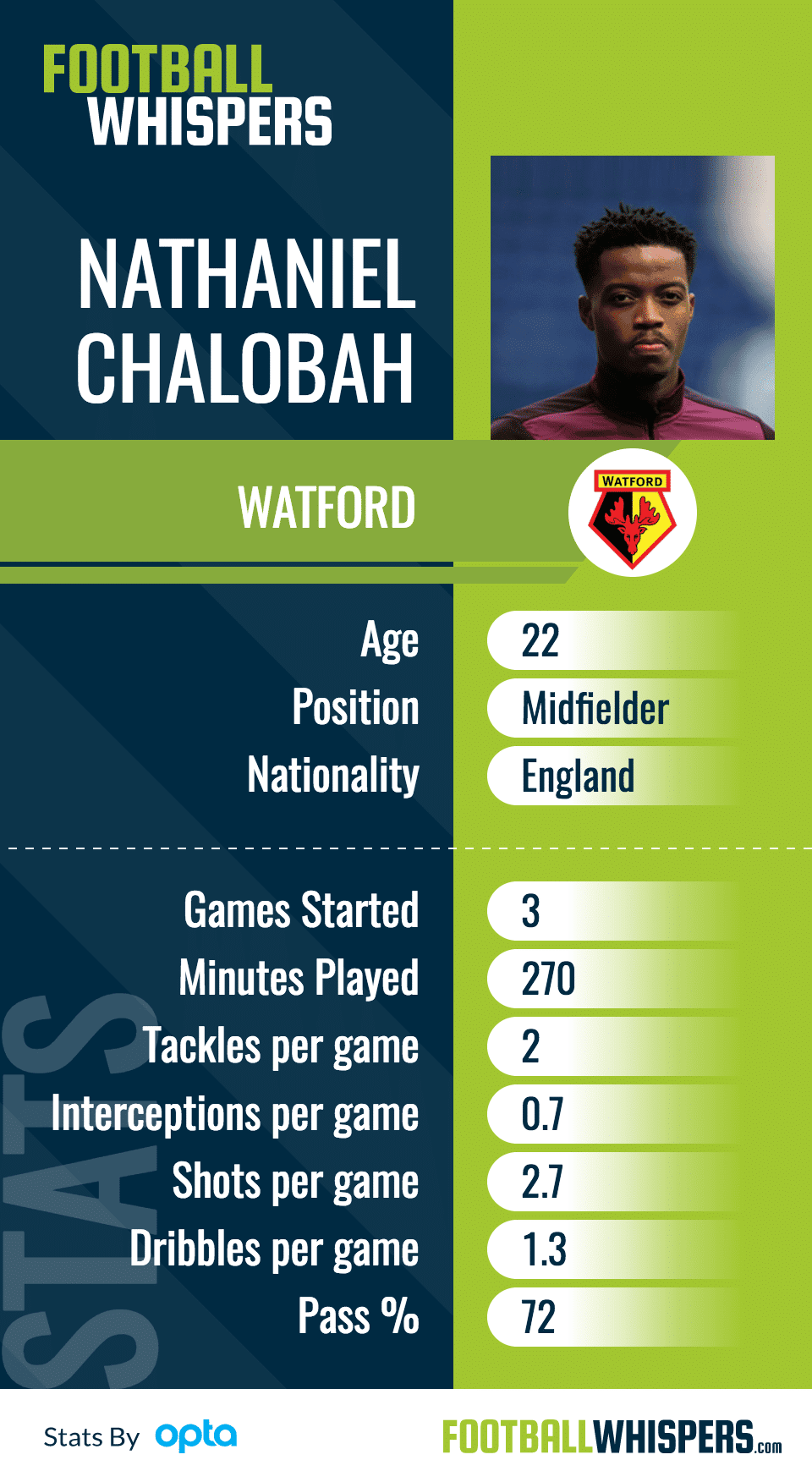 A strong start to the new campaign has seen the stylish midfielder called up for a World Cup 2018 qualification double-header against Malta and Slovakia at the beginning of September.

And by joining Marco Silva‘s side, Chalobah has given himself a good chance of earning further England calls – something that would be unfathomable were he still warming the bench for Chelsea on a regular basis.

Perhaps, therefore, Chalobah can be a trailblazer for the young English talent frustrated at a lack of opportunities. He is not the first player at a top-four club to find himself way down the pecking order with little opportunity of breaking into the first team.

Manchester City have had something of a knack for signing English players in order to meet the Premier League's homegrown rule before parking them on the bench and stalling their progress.

Fabian Delph, for example, who has had torrid luck with injuries, has made just ten Premier League starts since joining from Aston Villa in 2015. The ex-Leeds United midfielder had forced his way into the England side prior to his move to the Etihad.

Another English player who saw his progress stall while at City was Scott Sinclair. The winger joined from Swansea City in 2012 but was handed just two Premier League starts in three years. Now 28, Sinclair is finally back on track thanks to an electrifying season at Celtic.

That isn't to blame City solely though. Players are in charge of their own careers yet often lack the drive or, perhaps, bravery to move away from one of the Premier League's big boys in order to make the most of their career.

Jack Wilshere, to his credit, did just that last summer. The England international, the golden boy of his generation, was not so much stalling as pulled over on the hard shoulder with smoke pouring from his bonnet at Arsenal.

A season-long move to Bournemouth was low-risk for the 25-year-old who joined Eddie Howe's men with the aim of forcing his way back into England contention. Yet again injuries proved his undoing but he managed more starts (22) for the Cherries than he's managed since the 2010/11 campaign (31).

The Gunners appear to have moved on without the 34-cap England international and it seems unlikely there will be a spot for him in Arsène Wenger's starting XI this season. Going into the final season of his contract, Wilshere would be better served leaving the Emirates Stadium to get his career back on track.

And this is where Chalobah comes in. The Watford midfielder won't know it but he could end up blazing a trail for English players in need of first-team football if he is successful at Vicarage Road.

In joining the Hornets, Chalobah will be hoping to either drag the Hertfordshire side up the Premier League standings or see his own stock rise, regardless of how the team perform, and secure a move to a bigger club.

If he can do either, further England call-ups are a formality. And others will follow if he is successful.

Chalobah's move to Vicarage Road is one of the least-heralded this summer but it might just be one of the most important for the future of the England national team.