When Roma sold Mohamed Salah during the summer of 2017, the Serie A club thought they'd played a blinder. The former Chelsea had cost £16million. One year later, they pocketed £39million for the Egypt international and spent just £10million of that on his replacement.

The Italian side never envisaged Salah's meteoric rise and, in hindsight, the deal now looks a bad one of them. However, at the time it was viewed as shrewd business with the man they signed to replace him considered by many to be potentially better.

Cengiz Ünder was being courted by Europe's top clubs having initially burst onto the scene as a 17-year-old with Altinordu before a transfer to Başakşehir. Reports claimed he was close to joining Manchester City before Roma swooped. It was a coup. And an impressive one at that.

When he netted against Shakhtar Donetsk during the 2017/18 Champions League campaign, Ünder became the youngest Turkish player ever to score in Europe's elite club competition.

Injuries halted his progress during his first three years in Roma but, when fit, he has performed. But under new coach Paulo Fonseca, Ünder has fallen out of favour and a move is on the cards.

He was linked to Everton during the January transfer window but it is Tottenham Hotspur who have long held an interest in the Turkey international and, according to reports, José Mourinho wants to sign the 22-year-old this summer. Any deal, however, hinges on the North London club qualifying for the Champions League.

But Kane is susceptible to the odd ankle injury and Lamela has had hamstring problems for large parts of this campaign. Furthermore, the Argentine is the only left-footed attacker in the squad. For the purpose of balance, that needs to be addressed.

If reports are accurate, £30million would be required to convince the Serie A side to part with their No.17. By no means a bargain, it could be a clever piece of business. 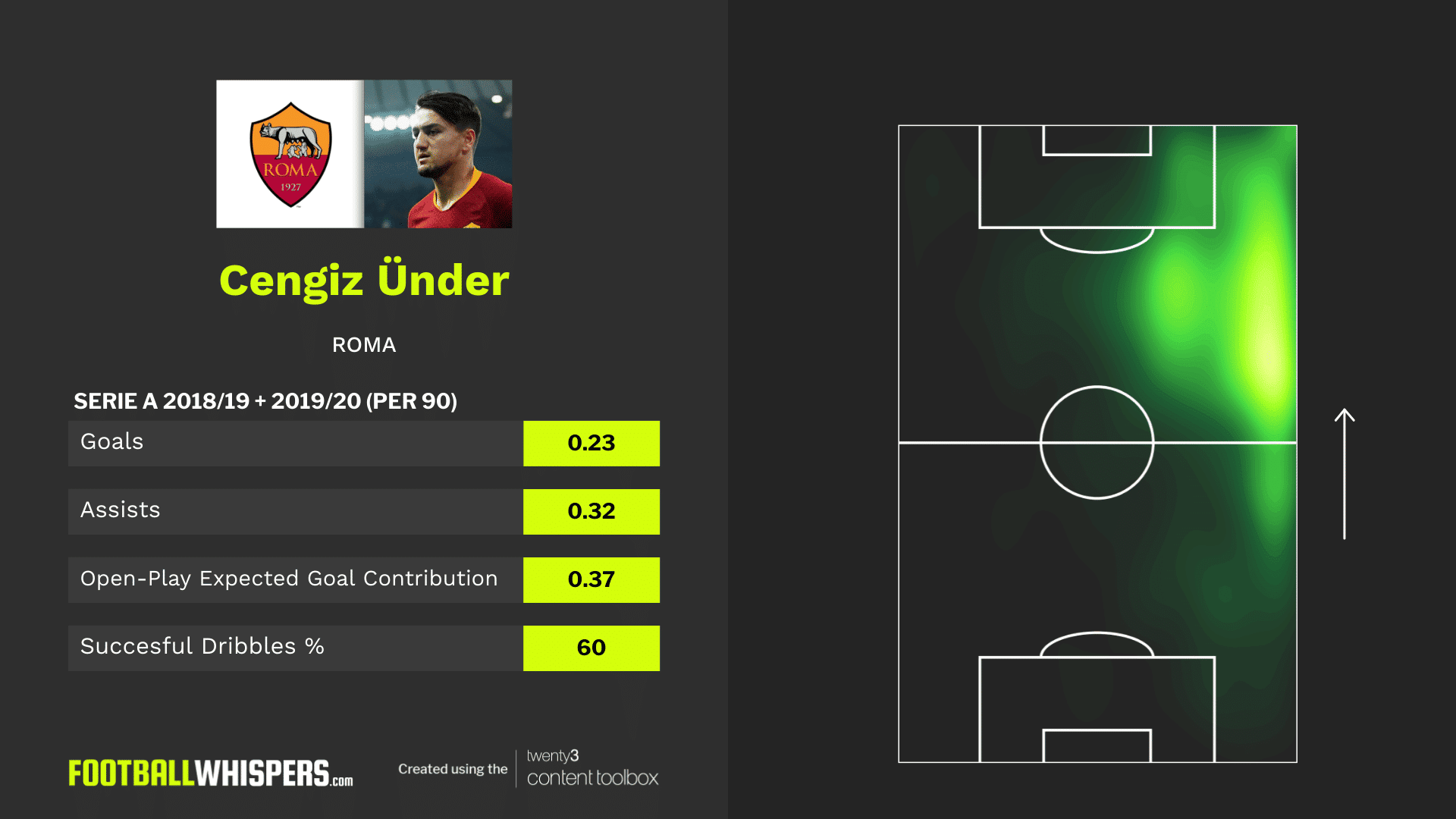 He's overperforming his expected numbers, averaging 0.37 open-play expected goal contributions per 90. That is still an impressive return for a player not consistently in the starting XI.

Ünder can create something out of nothing. An underrated trait in the modern game. 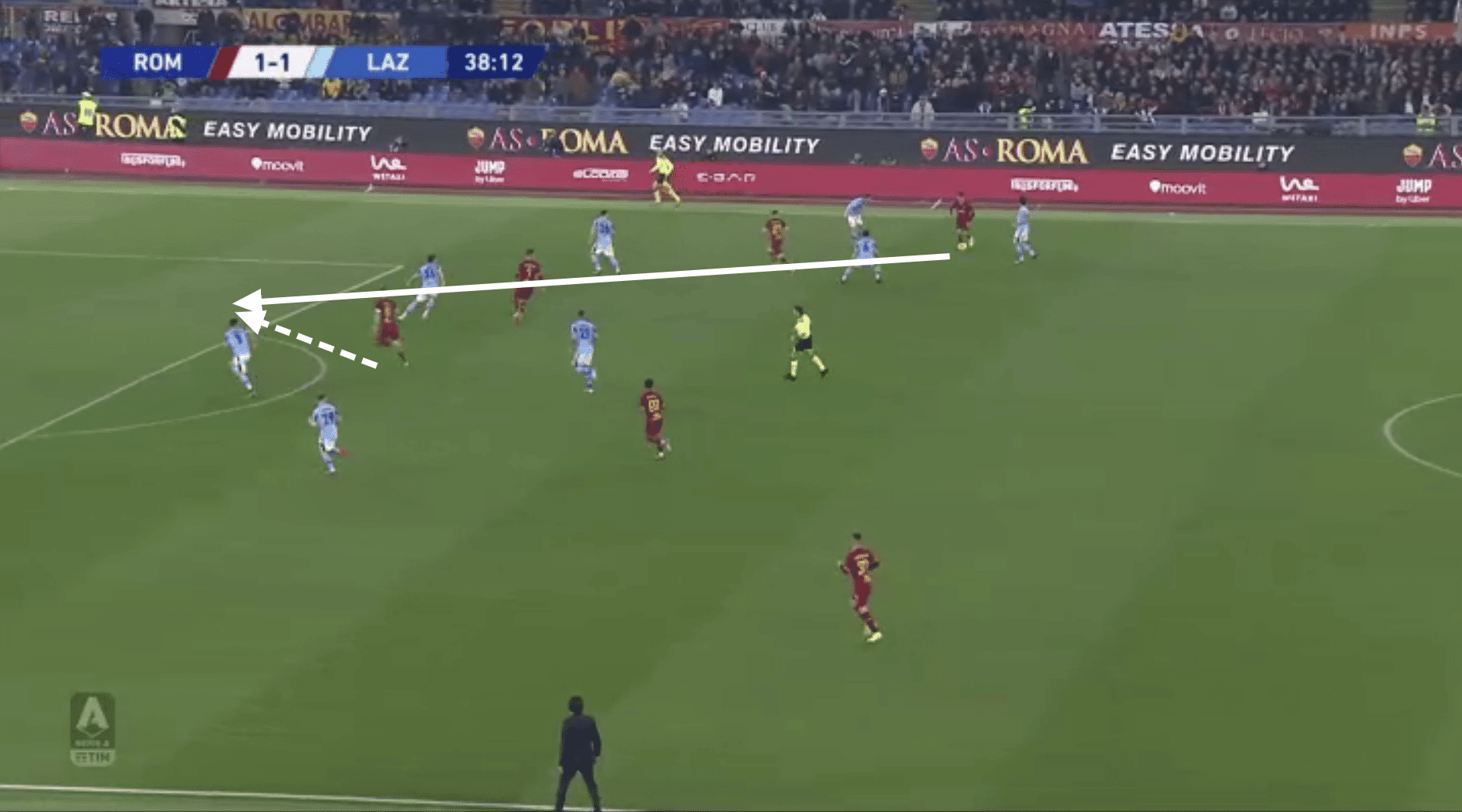 In the still above, the 19-cap Turkey international picks up the ball on the right. Lazio look to smother him to prevent him from going on one of his slaloming runs – he completes 60 per cent of the dribbles he attempts.

Before they're able to get close to him, he's threaded a pass past five players and into the path of Edin Džeko. In the blink of an eye, Lazio went from having seven players behind the ball to the last defender needing to make a desperate tackle to stop the former Manchester City forward getting a shot off.

The pass looks simple but very few would attempt it. 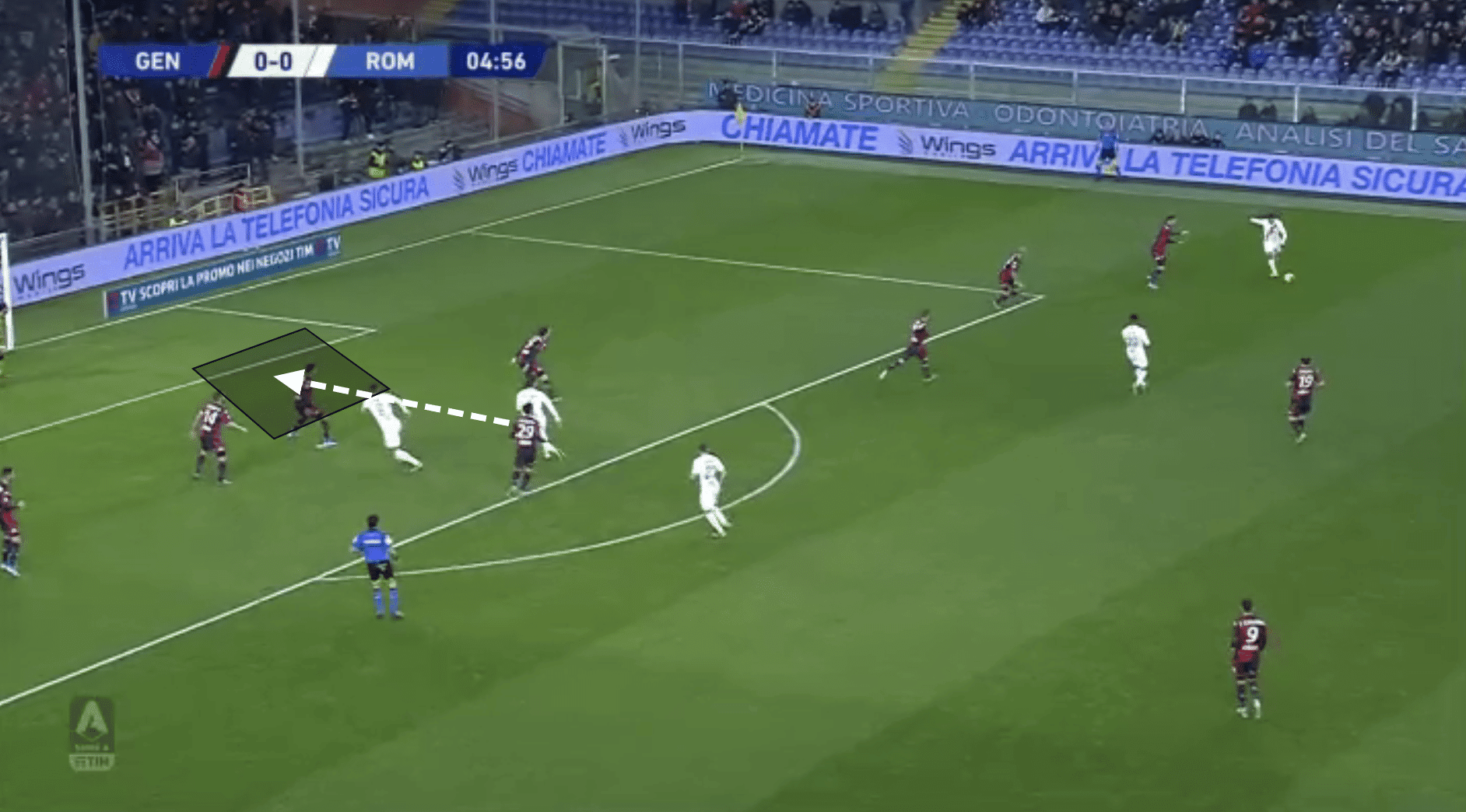 It is a similar story in the picture above. Ünder picks the ball up on the right and immediately looks to cut inside. He could play a simple five-yard pass to his team-mate and dart into the space behind the left-back in the hope of getting a return pass.

With Genoa outnumbering Roma five to two in the area, a cross into the box could be viewed as a waste of possession. But the 22-year-old doesn't just float a hopeful ball in. He puts the cross into an undefendable part of the box, highlighted by the black box.

The Roma attackers have the run on the opposition. Defenders are having to run backwards towards their own goal. It is a dream situation for attackers and a nightmare for the opposition. The visitors score what turns out to be an easy goal. But it was only due to Ünder's brilliance that this opportunity came about.

The Turkey international could fill the creative void left by Christian Eriksen‘s departure. Spurs have goals but they need a man to provide the ammunition. Ünder does just that.