Roma must be sick at the sight of Merseyside clubs.

Having sold Mohamed Salah and Alisson to Liverpool in successive summers – effectively turbo-charging the Reds' romp to European success – the Giallorossi are now contending with more interest from that part of the world in one of their players.

But it's not the newly crowned European champions. Instead, it's Everton knocking on the door, chasing Cengiz Ünder, the Serie A club's 21-year-old Turkish winger.

According to TuttoMercatoWeb, the Toffees have seen a £24.8million bid rejected. They're expected to return with an improved offer and, if Roma acquiesce, Marco Silva may have an intriguing talent on his hands.

But is Ünder a clear improvement on Everton's current attacking options?

The Portuguese coach deployed a 4-2-3-1 during his first year at Goodison Park. Ünder, a natural wide man, would presumably fight with Bernard and Richarlison for a starting place behind Dominic Calvert-Lewin, who's established himself as the club's first-choice striker.

Firstly, Ünder's Everton move would not require a dramatic tactical adjustment given he has mainly played in a 4-2-3-1 at the Stadio Olimpico.

A dynamic, fleet-footed winger unearthed by Monchi, who paid Başakşehir a fairly modest £11.7million, he shot to prominence during the second half of the 2017/18 campaign having initially been used as a substitute by then Roma boss Eusebio Di Francesco.

His burst of form between January and March, triggered by Di Francesco's switch to a 4-2-3-1 from a 4-3-3, sparked speculation he could move to the Premier League. Arsenal and Tottenham Hotspur were linked. Considering he averaged 0.84 goals per 90 (five in total) during that period, it's not difficult to see why they were keen.

Ünder ended his first season in Italy with eight goals and two assists in 1,552 minutes of action. That meant a goal involvement every 155 minutes which, for a 20-year-old making the transition from Turkey to Italy, was a commendable return.

This season, he has significantly enhanced his output, managing six goals and 11 assists.

His 17 Serie A starts suggest that, while he is prone to inconsistency, he is hugely effective during his time on the pitch. In fact, with 0.65 goals or assists per 90, Ünder was the most impactful player under the age of 23 in the final third during the 2018/19 Serie A season.

He seems like a Silva player, too. The Everton boss wants his attackers to press aggressively and win the ball high up the pitch. With 1.17 possession gains per 90 in the attacking third, Ünder comfortably eclipses Richarlison (1.1) and Bernard (0.84).

Ünder is a more creative presence than Richarlison on the right. Whereas the Brazilian only created 0.06 big chances per 90 in 2018/19, he mustered 0.39. Bernard, meanwhile, managed 0.16 from his position on the left. 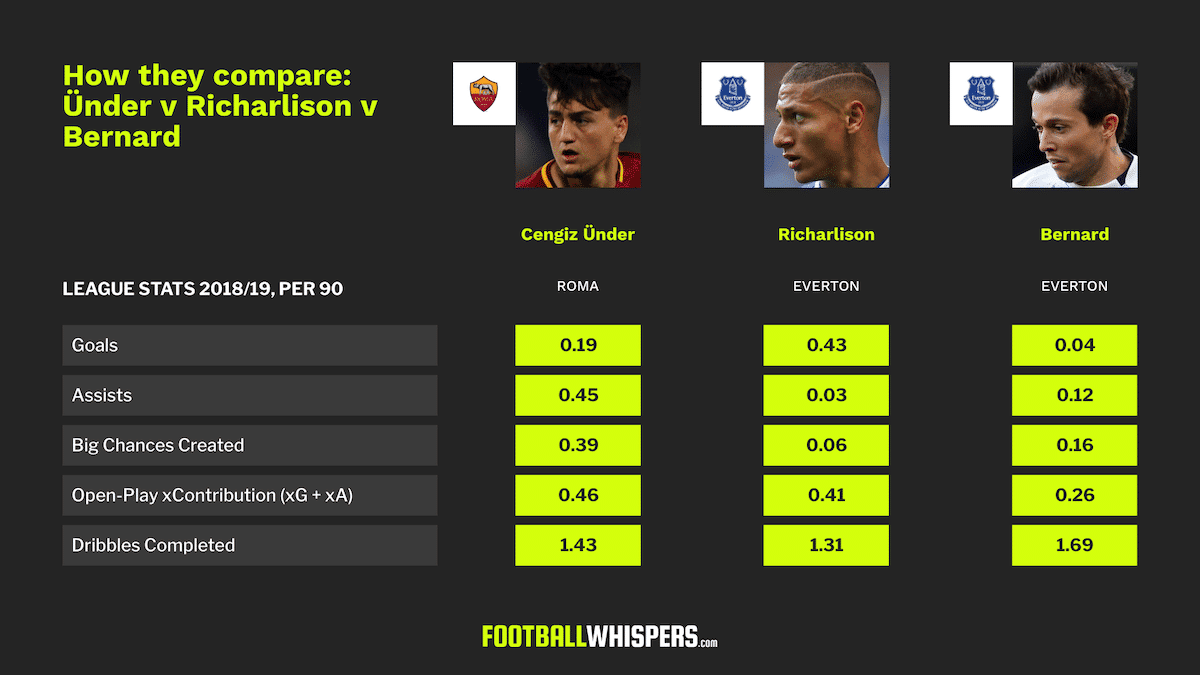 With the ability to take defenders on in one-on-one situations and cross with both his left and right foot, Ünder is an unpredictable and sometimes devastating presence out wide.

His quality from wide areas would be the perfect way to tap into Calvert-Lewin's aerial prowess. The 22-year-old striker scored four headed goals last season and managed the second-most headed shots behind Aleksandar Mitrović in the Premier League, with 26, but the most per 90 with 1.31.

But make no mistake; Ünder possesses plenty of goalscoring threat himself. He is a scorer of great goals rather than a great goalscorer. His first Roma strike was a thing of beauty, an opening-minute, left-footed bullet which ripped past Hellas Verona goalkeeper Nícolas. His goal against Udinese a few weeks later was another speed-of-light strike that fizzed into the far corner.

And just a few days ago, he could be found pulling another finish out of the top drawer during Turkey's friendly win over Greece.

The main thing for Silva will be keeping him fit and drilling consistency into his game. After producing some of his best form before the mid-season winter break, a thigh injury forced him to miss ten weeks. By the time he returned, Di Francesco had been sacked and opportunities were hard to come by under Claudio Ranieri.

With Roma missing out on Champions League football and uncertainty over their managerial situation, Ünder's departure seems a distinct possibility. 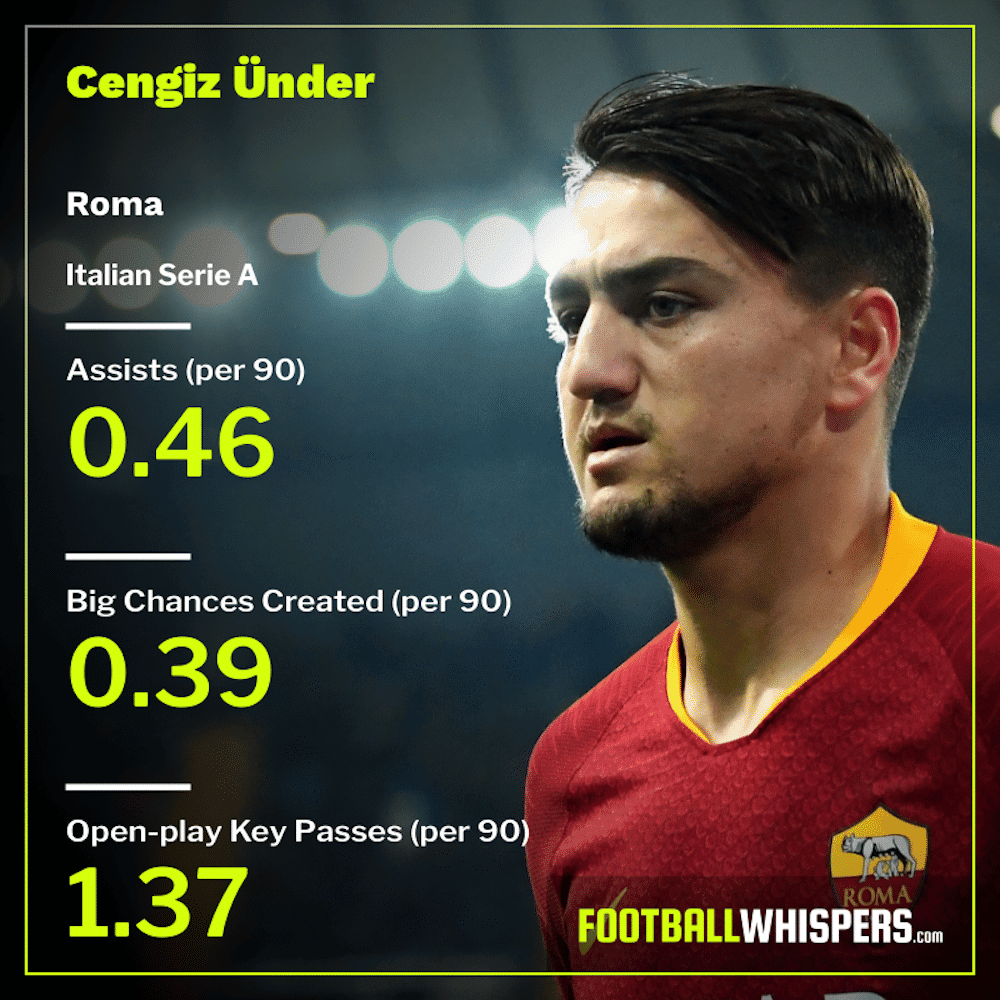 Given his scope for improvement at just 21, the Toffees will have to improve their offer, possibly to £40million.

However, that seems worth it for one of Europe's most promising young wingers, especially considering their £50million and £45million outlays on Richarlison and Gylfi Sigurðsson respectively.

Given Ünder's potential and ability to turn a game in an instant, Everton would be foolish not to go back with a better offer and strengthen their squad with a hugely exciting young prospect.