Celtic couldn’t have asked for a much tougher fixture to resume domestic affairs after last week’s trip to face Astana in Champions League qualifying. Following that away day in Kazakhstan, they welcomed St Johnstone to Parkhead on Saturday afternoon.

In their opening three Scottish Premiership games, Brendan Rodgers’ side had yet to drop a single point. A nervy 1-0 win away to Partick Thistle had been sandwiched by more comprehensive victories over Heart of Midlothian and Kilmarnock.

However, St Johnstone had also yet to drop points going into the clash, meaning the fixture was one involving two of the league’s table-topping sides. The end result was 1-1, with Celtic struggling to break down a well-organised opponent.

Rodgers lined his side up in a rough 4-2-3-1 shape, with Mikael Lustig and Nir Bitton at centre-back, Scott Brown joined by Olivier Ntcham in central midfield and Leigh Griffiths leading the line as the lone striker.

Tommy Wright responded with a 4-5-1 system – led by the experienced Steven MacLean – that looked to stifle the hosts and reigning champions. The ploy worked, though this had as much to do with Celtic’s failings as it did St Johnstone’s successes.

One of Scottish football’s primary tactical customs is intense, man-oriented marking. This essentially means each player within a given team is responsible for marking any opponent that comes into their specific zone.

Aberdeen, still undefeated after four games, deploy this tactic in the defensive phase to good effect, and St Johnstone did the same at Celtic Park last Saturday.

This made it difficult for Celtic to build possession from the back in the way they would like, as they were faced not with a passive, deep defensive block, but with an intensely man-oriented side keen on restricting their passing options fairly high up.

As a consequence, Rodgers’ side often struggled to build play through the thirds. The centre-backs were forced to go wide too often, though this issue could have been prevented by better movement off the ball from the champions.

Perhaps the most noticeable issue for Celtic when building possession from the back was their lack of compactness. The space between the midfield and the attack was simply too great – Brown and Ntcham looked to receive from the defence, but they were generally well covered by St Johnstone’s man-oriented marking.

With few or no viable passes into the middle third, Lustig and Bitton were therefore forced often to simply bypass the two central midfielders and either drive forward with the ball at feet or pass long. The former isn’t ideal; neither are particularly comfortable dribbling into tight spaces. The latter, meanwhile, wasn’t helped by the sheer distance between them and the forwards.

The large spaces between Celtic’s centre-backs and attacking players meant that any passes between them were risky. Not only do they ask more of the ball-player’s accuracy, but St Johnstone had more time to react to these long passes, and therefore had more time to mark, stifle or intercept.

Examples of the frustration this caused the centre-backs are seen clearly below. 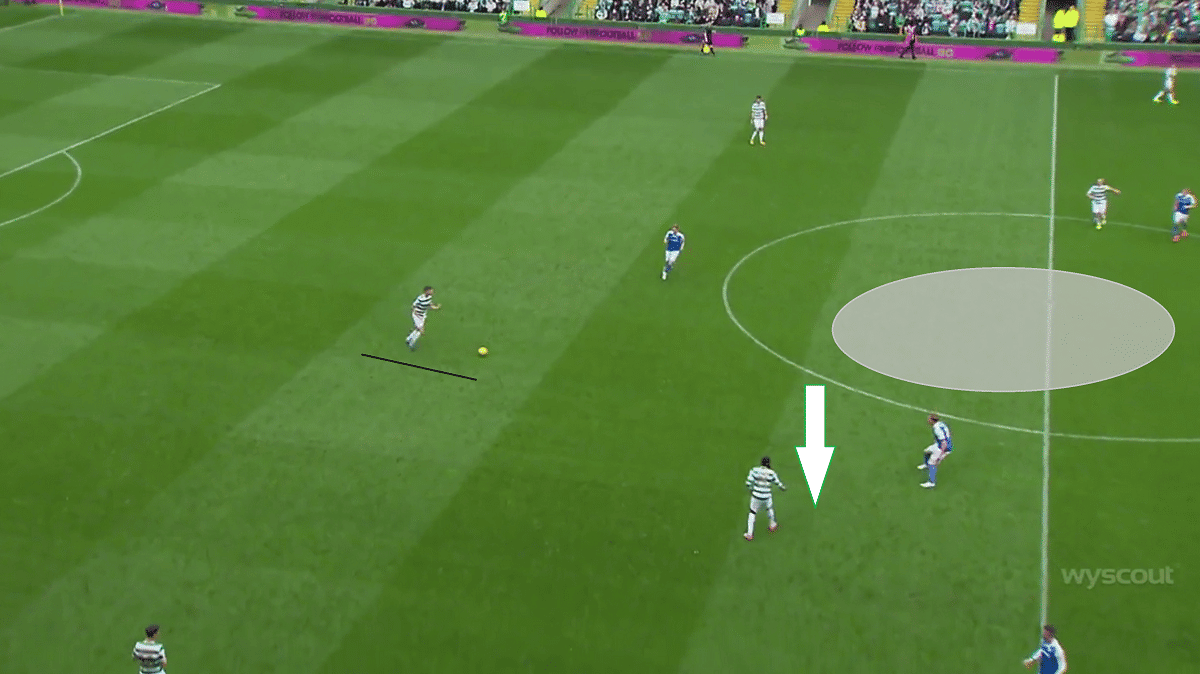 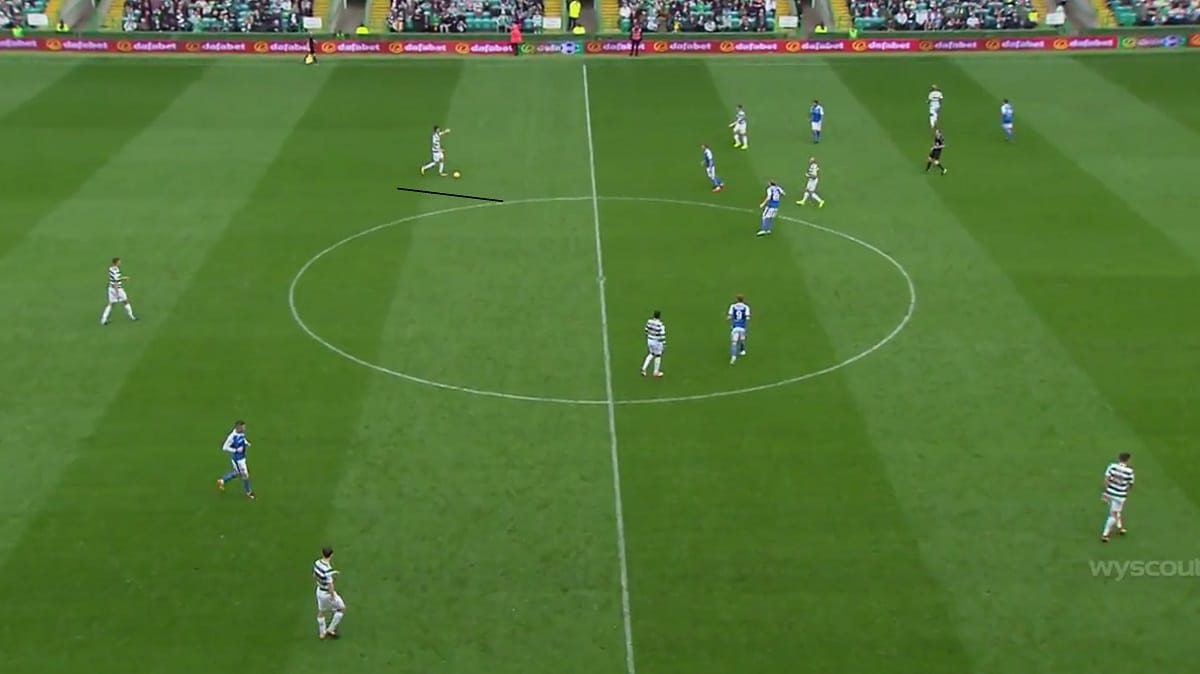 In the first image, Ntcham cleverly pulls to the right to create space for a forward pass for Lustig, but there is a large gap between the Swede and the forward player he is aiming for. Meanwhile, in the second, congestion gives Bitton no obvious forward pass.

There were some individual instances of Celtic’s forwards dropping deep or pulling wide to create space in behind, but this was rarely exploited by a team-mate. An example of this is seen below, where Scott Sinclair drops deep, drags his man-marker with him, only for nobody to run in behind. 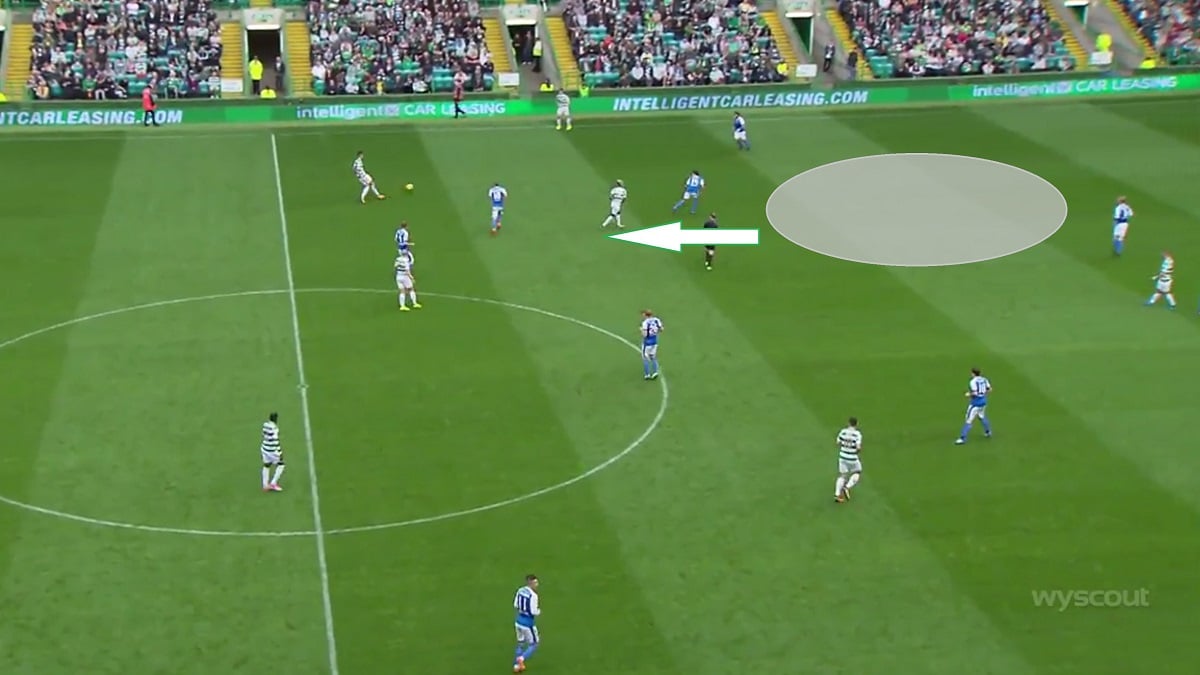 Additionally, there was often a lack of compactness and movement among Brown and Ntcham, meaning they were unable to connect with one another and the centre-backs to form triangles and exploit the reactiveness of St Johnstone’s defensive setup.

An example of this is seen below, where Celtic’s central midfielders are static and almost on opposite sides of the pitch. There is no possibility for them to pass to one another, and their wide positioning makes it easier for their opposition to press them and force them backwards. 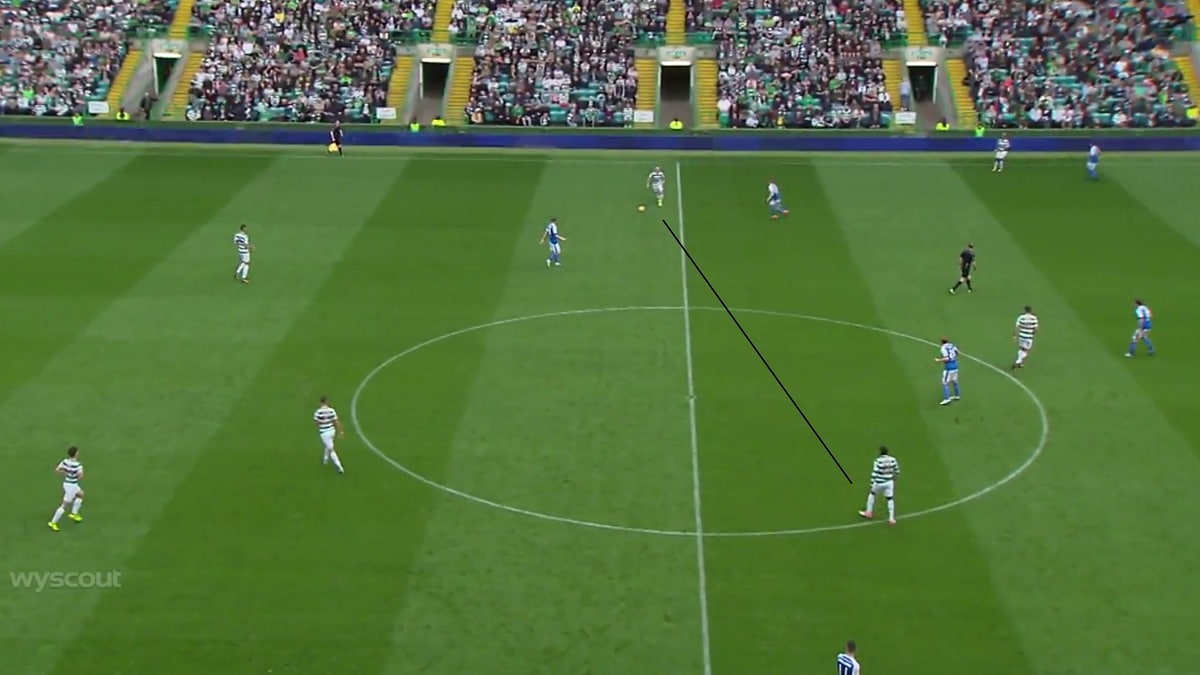 Unsurprisingly, it was from a build-up situation that Rodgers’ men conceded the opening goal. Stifled by St Johnstone’s man-marking, they were unable to pass through the pressure and an aimless kick from Craig Gordon found its way to MacLean, who equalised.

POSSIBLE SOLUTIONS TO THIS PROBLEM

One aspect of Celtic’s play against St Johnstone that was criticised was a lack of tempo in their possession. However, slow passing is often the result of a problem, rather than the problem in and of itself.

Quick passing and interplay requires a far more compact shape than the one Rodgers’ side took up on Saturday afternoon. This means reducing the distances between the lines, as well as the distances between players in the same line. For example, the attacking line should be closer to the midfield so as to forge connections with them, while Brown and Ntcham should be closer in the midfield for the same reason.

Celtic would also benefit in such situations from more movements off the frontline, with at least one of the forwards looking to drop back, drag a marker out, and create space for runs in-behind.

Another option would be to rotate positions more – the Bhoys forwards were simply too static, which made it easy for St Johnstone to man-mark them.

ARMSTRONG AND MCGREGOR TO THE RESCUE

Rodgers’ decision to introduce both Stuart Armstrong and Callum McGregor at different points in the second half were crucial to Celtic’s rescuing a point from this match.

They also offered valuable lessons for the team to learn from when next faced with an organised, intense man-oriented defence at home or in European action.

Armstrong brought more dynamism to the midfield than the man he replaced, Ntcham. He was constantly on his toes, moving in order to find ways to get on the ball, or make room for others to do so.

He was not afraid to break the lines himself with forward runs, as shown in the below still. Here, Sinclair drops deep and Armstrong responds by pushing into the space behind him.

The former Dundee United man also showed intelligence in moving to create space for forward passes from the centre-backs. Below he shifts infield, drags his man-marker with him and gives Lustig time and space to drive forward with the ball at feet. 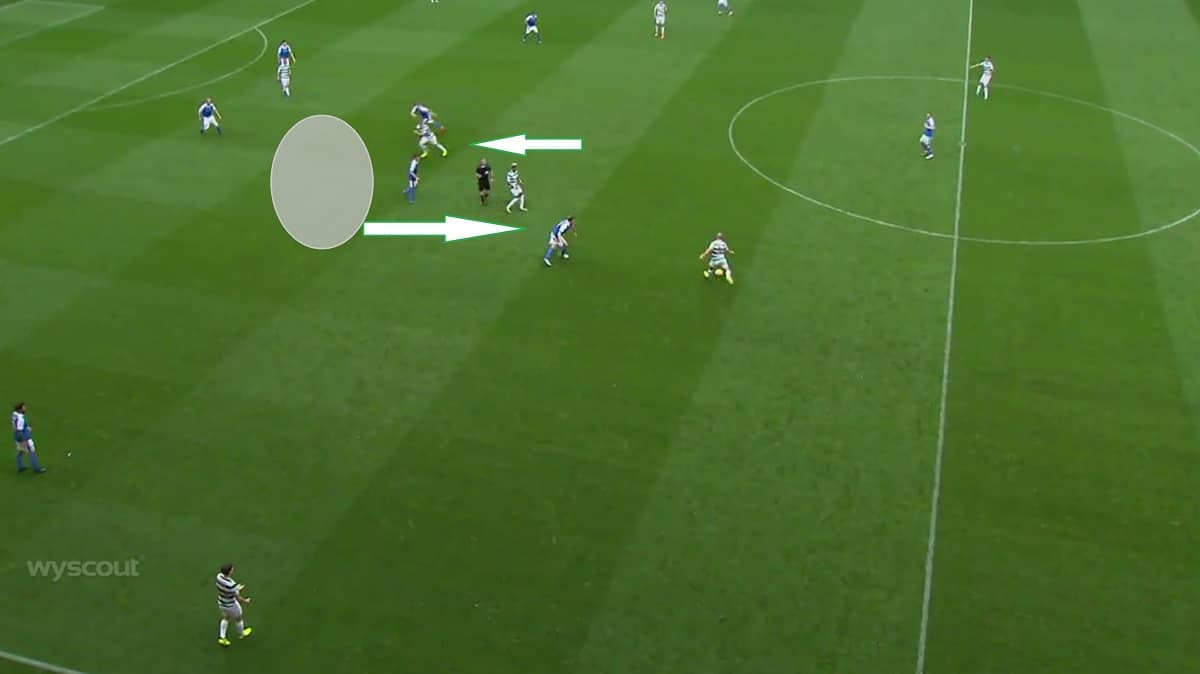 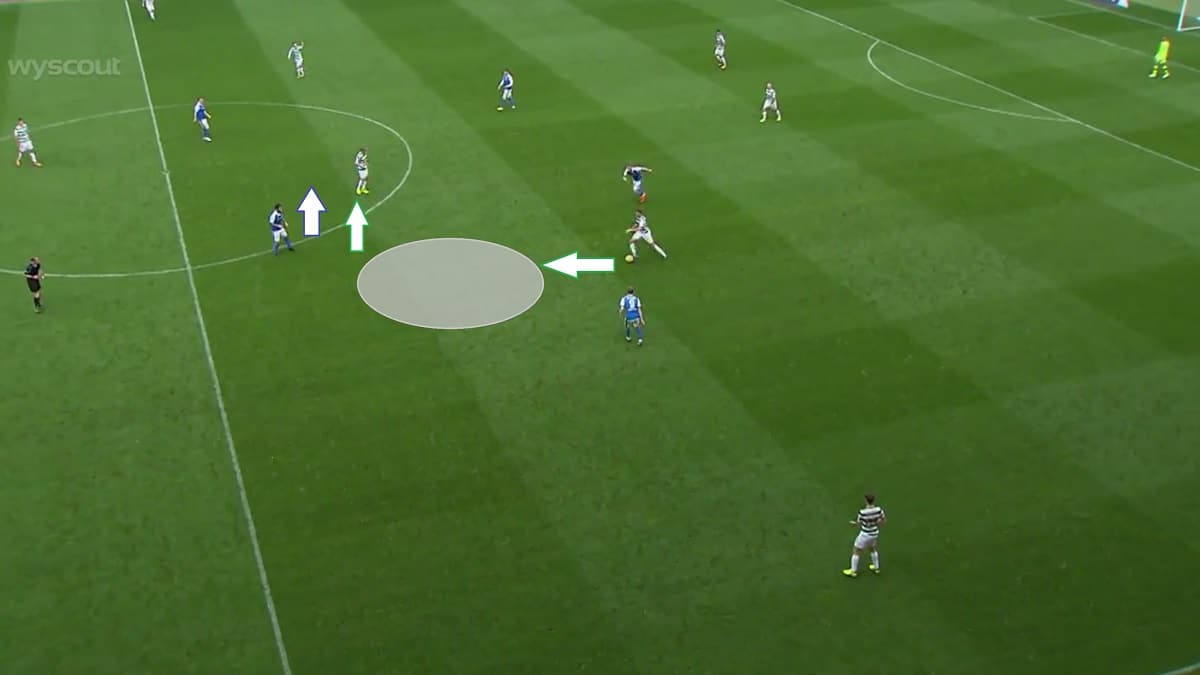 McGregor, who looked lively throughout his substitute outing – and eventually scored the equalising goal – combined well with Armstrong and his other team-mates to enable better build-up from the back.

The below still exemplifies this. 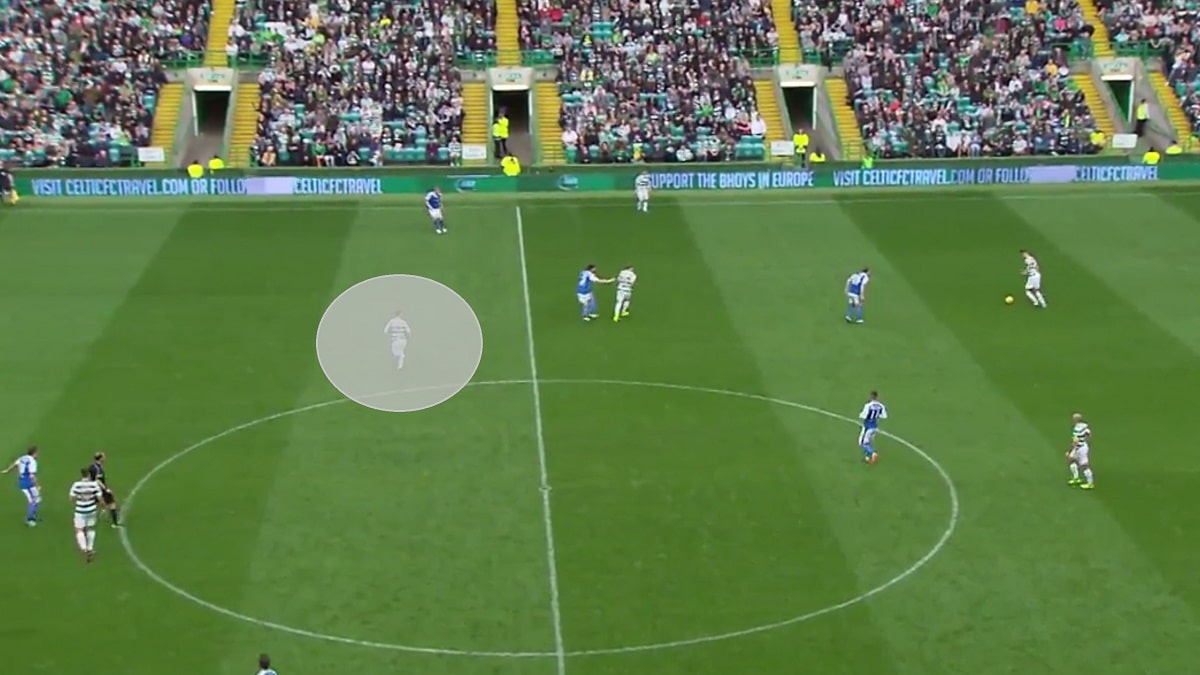 Four opposition players are focused on marking their specific men. Armstrong is well and truly covered by his marker, but McGregor takes the opportunity to move behind distracted St Johnstone defenders.

His blindside movement goes unnoticed, and therefore unmarked, leaving him free to receive the ball from Lustig with a pass over the top. And, once he is marked, he quickly passes on to a team-mate to continue the attack.

McGregor and Armstrong showed how important they can both be to Celtic in games like these. Against man-marking opposition, their movement off the ball can help to create space and build better possession through the thirds.