Kristoffer Ajer is enjoying something of a breakthrough season with Celtic, having established himself as a member of the first-team squad. Indeed, such has been his impact in a relatively short period of time that we could already be seeing the next Celtic player who will be moving to England for a huge fee.

At just 20 years old, the Norwegian international has already been playing professionally for four years. At 16, Ajer was playing first-team football for the Norwegian club IK Start. Indeed, such was the impact that the youngster made, he was named captain of the side at 16. Originally lining up as a creative midfielder it was not until he moved to Celtic that he was moved back to the centre of defence.

In terms of physical profile the positional change made sense – Ajer stands at 6ft 5ins. His physique perhaps lends itself to speed rather than power, but technically Ajer is an extremely intriguing prospect as a central defender.

In a recent match for Celtic against Hibernian in the Scottish Premiership, we saw a glimpse of what makes Ajer so dangerous. Picking up the ball just inside his own penalty area, he drove forward with the ball at his feet, moved past four opposition players and moved with deep into the opposition half.

At no point during this attacking move did Ajer look to be out of control. Instead, he showed impressive control and acceleration as he penetrated through the Hibs defensive line comfortably. This season we have seen Ajax use Frenkie De Jong, a player with a similar profile to Ajer, in a similar way: as a playmaker starting from the defensive line. 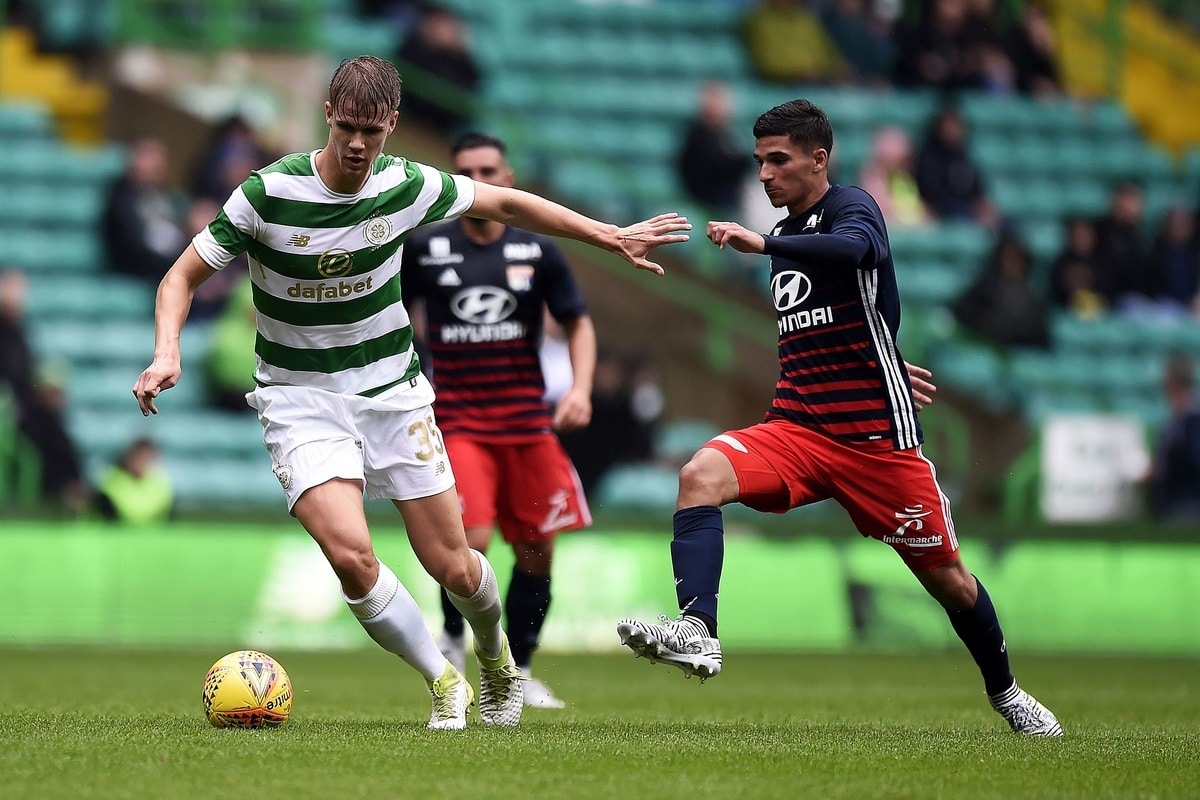 For a team like Celtic, who play for the majority of the time in possession of the ball against sides who sit deep in a low defensive block, the ability of a player in the defensive line to dribble and carry the ball can be hugely beneficial. As the game has evolved we have seen full-backs become one of the most important positions in an attacking sense, given the space in which they have to operate.

With players like Ajer, we could see the next evolution in attacking football, with central defenders who are capable of breaking opposition lines when dribbling forward with the ball.

As you would expect from a player who was initially an attacking midfielder, Ajer is also an excellent passer of the ball, equally comfortable playing short of long but always progressive and looking for opportunities to break the opponent’s lines with vertical passes. The young defender is also very press resistant, with the ability to take possession in tight areas and retain under pressure.

With that said, however, Ajer is not completely without defensive skill. He uses his height to great effect and wins an extremely high proportion of aerial duels, although this should not be solely attributed to his height; he also positions himself in the penalty area very well, which is somewhat of a surprise given the short period of time that he has spent playing as a central defender.

As well as being effective when the ball is in the air, Ajer is equally capable of defending when the ball is on the ground. He reads danger well and his ability to position himself astutely means that he effectively cuts out passing lanes when attackers look to make runs behind the defensive line.

As well as being strong in the air, Ajer is quick in covering ground around the defensive third of the field. He accelerates well and can keep pace with smaller, quicker forwards over short distances, ideal for tracking runners looking to break the defensive line. This pace also translates into the attacking transition, with the defender using his quickness as well as his long stride to carry the ball out of the defensive third and move his team forwards towards the opposition goal.

How long though can Celtic keep the Norwegian youngster in Glasgow? In recent seasons the Bhoys have built a significant reputation for their ability to recruit talent from European markets before developing them and selling on to English sides for a large profit.

Take the likes of Virgil Van Dijk or Victor Wanyama for example. The Dutch defender was signed by Celtic for a reported £2million in 2013, before being sold on to Southampton for £14million in 2015 – a significant profit already.

Celtic are also intelligent in their use of transfer clauses in any sale that they make, and they gained extra profit when Van Dijk moved from Southampton to Liverpool for £75million. And Victor Wanyama was signed initially from Belgian side Germinal Beerschot for £1million in 2011, before moving south to Southampton for £13million in 2013.

There is every possibility that Ajer could be next, with clubs becoming more and more enamoured with defenders who are comfortable in possession. If he continues his development in the manner that he has seen this season so far then there is every chance that there will be a big-money bid made sooner rather than later.

It will certainly be intriguing to see whether Ajer can translate his game to the increased level of the English top flight, but equally it will be interesting to see where Celtic turn to replace him within the squad. How much longer can the Scottish champions continue to find value in markets in Europe?

The Celtic recruitment and player development team deserve great credit for the way they have dealt with the turnover in playing staff in recent seasons. Their success in the transfer market speaks volumes about the strong structure that they have in place. Unfortunately, that structure will not be able to rely on Ajer for much longer.