When the seeding for the 2017/18 Champions League group stage draw was confirmed, Celtic no doubt imagined the various options that would have made progression to the knockout stages more viable. Lumbered in the fourth pot, the Scottish Premiership titleholders saw reason for hope.

Of the top seeds, perhaps Spartak Moscow or Benfica appeared the most beatable. Meanwhile in the second pot, the likes of Porto and a depleted Sevilla were the most appetising. But Brendan Rodgers’ side ended up with Bayern Munich and Paris Saint-Germain, two of the toughest possible teams to draw.

On top of that, Celtic were landed with a tricky third seed in Anderlecht. Just last season the Belgian side made it to the quarter-finals of the Europa League, where they were knocked out by eventual winners Manchester United courtesy of a narrow 3-2 aggregate defeat.

Rodgers has stated his ambition of the Scottish giants remaining in Europe beyond Christmas, but with such tough draw that will be easier said than done. Here Football Whispers analyse the Bhoys’ Champions League group stage opponents.

How they got here: As German Bundesliga champions

Since Ancelotti took over from Pep Guardiola, Bayern haven’t been quite so enthralling to watch. The tactical innovations and game-specific tweaks of system are not so frequent, but the German giants remain a powerful force loaded with individual talent and organised astutely.

The Italian boss favoured a rough 4-3-3 shape in his first campaign as manager in Bavaria. This was a classically pragmatic choice, providing a balance between creativity and stability. Thiago was handed a more influential role within the midfield, though Thomas Müller didn’t fit in quite so easily.

Bayern continue to defend high up the pitch, squeezing the space in which their opposition can play. This is enabled primarily by the technical ability and intelligence of goalkeeper Manuel Neuer, who acts as a sweeper-keeper. The German is decisive, comfortable on the ball and quick off his line, ensuring simple long balls over the top are relatively harmless.

Celtic could look to target Mats Hummels’ lack of pace and athleticism, pinpointing the channels on either side of the left-sided centre-back for direct passes to Moussa Dembélé. However, against such a quality possession side, it will be difficult for the Scottish champions to see as much of the ball as they would like.

Last season the Spanish international finally looked like the star man many had predicted he would become in his younger years. He acted as Bayern’s creative fulcrum, providing more advanced incision in front of Arturo Vidal and the now-retired Xabi Alonso.

Among the German champions’ squad only two players completed more dribbles per game than Thiago’s 2.2, and only three averaged more than his 1.8 key passes. However, no-one got near his remarkable 94.9 passes per game, which were completed at an impeccable success rate of 90.2 per cent.

The 26-year-old also had a surprisingly high contribution defensively – no other Bayern player averaged more than his 4.6 interceptions, while his 2.8 tackles per game was bettered only by Vidal.

With his precise passing, spatial awareness, control in tight areas, Thiago will be a real danger to Celtic’s back line. Rodgers must find a way to stifle them if his side are to keep a clean sheet and pick up points at home or away to their German opposition.

How they got here: As French Ligue 1 runners-up

Last term was one of ups and downs for Paris Saint-Germain. In their first campaign under Emery’s auspices, they failed to keep pace with a Monaco side filled with attacking talent, losing their Ligue 1 title. They also blew a 4-0 lead over Barcelona in the Champions League, losing their second round second leg tie 6-1 in Camp Nou in an inexplicably poor showing.

However, the Parisians have started the 2017/18 season in positive fashion, winning all of their opening three league games comfortably. Perhaps the major tactical talking point is the signing of Brazilian superstar Neymar, where he fits in and what he brings to the table.

In just two outings so far, the former Barcelona man has hit three goals and set up three more. His dribbling skill, speed and ingenuity have been virtually impossible for French defences to handle, and he could be set to shine in the limelight after years spent in Lionel Messi’s shadow.

It’s perhaps no coincidence that Blaise Matuidi was allowed to leave in the same summer as Neymar arrived. Emery has continued using his favoured 4-3-3 system so far, but utilising his new signing in an attack already featuring Edinson Cavani requires certain caveats elsewhere, namely in midfield.

Matuidi is renowned for his incisive runs, but the less dynamic Adrien Rabiot has replaced him in the central trident. Alongside Marco Verratti and Thiago Motta, the emphasis here is on control and balance, allowing Neymar to play with greater attacking freedom.

PSG are an exceptionally gifted attacking side with pace and skill to threaten any of Europe’s finest in transitions, but there is hope for Celtic in the fact that they are also more vulnerable defensively than Bayern.

Emery looks to have adapted his tactics slightly to fit Neymar in, and it will be interesting to see if PSG suffer in terms of the quality of their high pressing and overall defensive compactness as a result. However, irrespective of any issues without the ball, the Brazilian will cause Celtic problems with it.

A devastating trickster capable of outwitting the most experienced of defenders, his movement, athleticism and footwork is something the Scottish champions will find virtually impossible to control.

How they got here: As Belgian First Division champions

Weiler led Anderlecht to the league title during his first full season in charge, though many in the UK will remember his side more for the way they competed against Manchester United over two tough matches in the Europa League quarter-finals.

Eventually the Belgian side succumbed in extra time, but the way they played in that tie suggests they could present serious problems to Celtic in this term’s Champions League group stage

However, they have not started well in 2017/18, losing two and winning just one of their opening four league matches. This may have something to do with a loss of talent over the summer, with Youri Tielemans moving on for Monaco and Frank Acheampong leaving for China.

There are tactical issues Celtic could exploit, too. Anderlecht play a fairly open 4-3-3 that often sees plenty of space between the lines. This lack of compactness could be taken advantage of with organised defending and incisive counter-attacking, where Rodgers’ side could aim to make full use of Scott Sinclair’s pace. 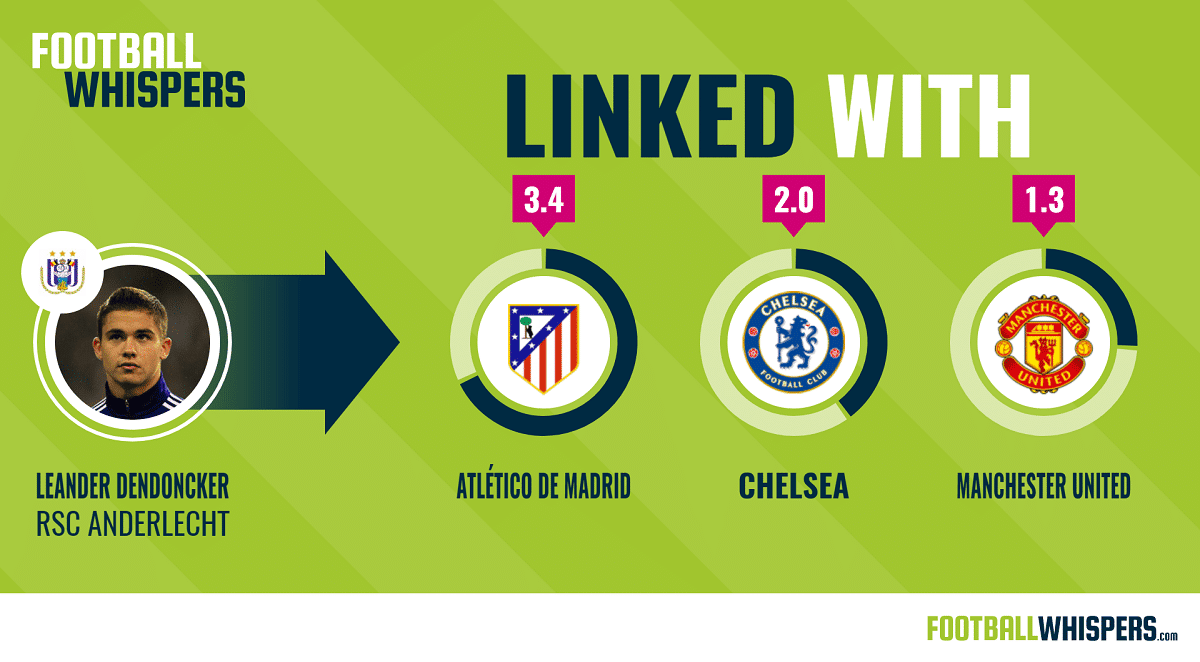 With Tielemans gone, Dendoncker will be expected to step up and provide the midfield control Anderlecht require. His range and accuracy of passing is something that could stretch the Celtic defence.