It was business as usual for Celtic at the weekend. Swatting St. Johnstone away 5-0, the Hoops strolled into Scottish Cup quarter-finals to continue their indisputable domination of domestic cup competitions.

But, as they charge towards an unprecedented ‘Treble Treble', progression in Europe remains a driving ambition for Brendan Rodgers.

The Northern Irishman's European journey with Celtic has brought much frustration. While there was no shame in finishing bottom of a Champions League group also containing Barcelona and Manchester City in 2016, last season was slightly different.

The Scot's volley, dispatched high into the Zenit net, sent Rodgers racing down the touchline à la Mourinho. Rodgers' touchline theatrics were not a prelude to European domination, however, proving a false dawn instead as the Russians roared back with a 3-0 win in the return leg.

Floored by Branislav Ivanović's early goal, Celtic retreated into their shells. The passing was ponderous, the pressing laboured. A different beast to the one that struggled at Parkhead, Zenit rallied and Celtic's European dream came to an end. Again.

This season started inauspiciously, with defeat to AEK Athens ending their Champions League campaign before the group stage. Dropping into a Europa League play-off round against FK Sūduva Marijampolé of Lithuania certainly felt like a step backwards.

Fears of regression proved impetuous, however. Celtic have found joy in Europe. While it's unrealistic to expect miracles against continental giants in the Champions League group stages, pipping RB Leipzig to second spot in their Europa League group in December was particularly pleasing.

Celtic fans would have been excused for fearing the worst after October's defeat in Leipzig – leaving Rodgers' side on three points from three games – but a 2-0 revenge win over the Germans followed by a hard-fought win away to Rosenborg was enough to seal their spot in the competition post-Christmas.

Now, Rodgers and his players have the opportunity to atone for last year's humbling elimination at the hands of Zenit against a club steeped in European tradition; Valencia.

Los Che are a club Rodgers knows well, having studied them during his course to earn his academy director's licence. He loves the city and still has many friends in the club but there will be no room for niceties when Valencia roll into Glasgow on Thursday night.

The Spaniards will be greeted by a few things; the cold, a thunderous din inside Parkhead and a Celtic side determined to keep alive hopes of reaching the last eight in European club competition for the first time since the 2003/04 campaign when, at the expense of the mighty Barcelona, Martin O'Neill's side progressed to the quarters of what was then called the UEFA Cup.

Teenage goalkeeper David Marshall was a standout performer as the Bhoys held on for a 0-0 draw in the Camp Nou (Alan Thompson's first leg goal enough to win the tie).

And while Valencia don't hold the same gravitas or fear factor as Barça, they certainly command a great deal of respect. In fact, they clinched that 2004 UEFA Cup, Rafa Benítez's parting gift before taking up the helm at Liverpool.

Underestimating this current crop is perilous, too. Marcelino's side have recovered impressively following an indifferent start to the season which left them languishing down in 15th in La Liga with eleven points from as many games. Since then, they have risen to eighth, six points off the Champions League places.

Their form in 2019 has showcased a team making up for their early-season wobble. They have lost just one of their six La Liga games, are unbeaten in their last five outings in all competitions, are one win away from the Copa del Rey final and became just the fourth side to take something away from the Camp Nou after a 2-2 draw with Barcelona, denied a win only by the brilliance of Lionel Messi.

They possess a great deal of star quality. Up front, they have Kévin Gameiro, Rodrigo Moreno and Gonçalo Guedes while slightly further back, in midfield, Dani Parejo has been a standout performer for them in La Liga, with six goals and three assists to his name. 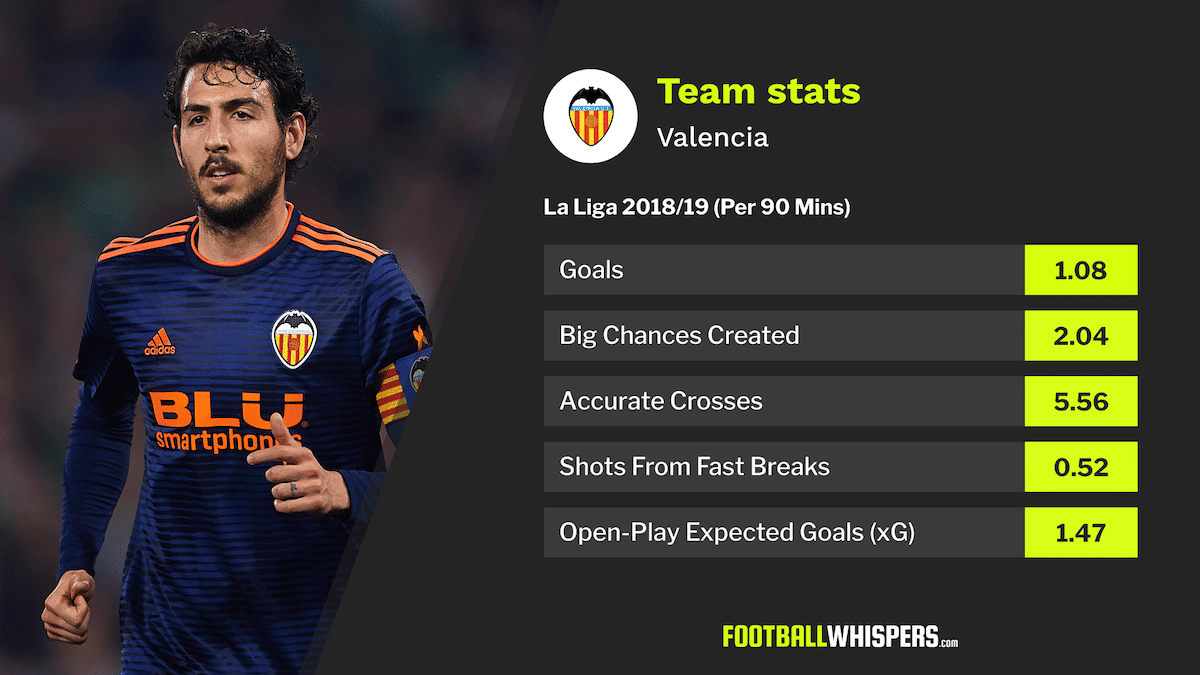 On the wings, Celtic's full-backs are set for a stern assessment of their defensive abilities, too, given the possibility of facing Denis Cheryshev, who scored four goals at last summer's World Cup, and Carlos Soler, who scored against Manchester United in the Champions League earlier this season.

Marcelino deploys a fairly dynamic 4-4-2, with which he found great success at Villarreal. It facilitates swift counter-attacks, particularly down the wings from where Valencia have averaged 5.56 accurate crosses per 90 minutes in La Liga (the second-highest in the division).

The system also offers Valencia's defenders plenty of protection, with Parejo and Geoffrey Kondogbia, who won this competition with Sevilla in 2014. Valencia's full-backs push high up the pitch when they're in possession, which allows Soler and Guedes to drift inside from the flanks and link up with the strikers. Their playmaking prowess has certainly shone through in recent months; only Barcelona average higher than their 2.04 big chances created per game.

With only 24 goals from 23 games Marcelino's side are not the most devastating attacking unit in Europe but, having conceded 20, they boast a tighter defence than La Liga leaders Barcelona and it will take invention and clinical finishing from Celtic's forward men to hurt them on Thursday night.

There has been enough of that recently, of course, with seven straight wins, seven clean sheets and 21 goals scored in an impeccable start to 2019 for the Scottish champions. Not that history matters a great deal but Valencia have also never kept a clean sheet on eight previous visits to Scotland.

Rodgers, hoping to enhance Celtic's continental status, will hope that record extends to nine come by 10pm on Thursday night.